Accessibility links
Women's Circadian Rhythm Beats Faster Than Men's A new study finds that the average daily cycle length of the biological clock in women is six minutes shorter than in men. Many women may be chronically sleep-deprived because they're fighting the urge to go to bed early. So how can two circadian opposites get along? 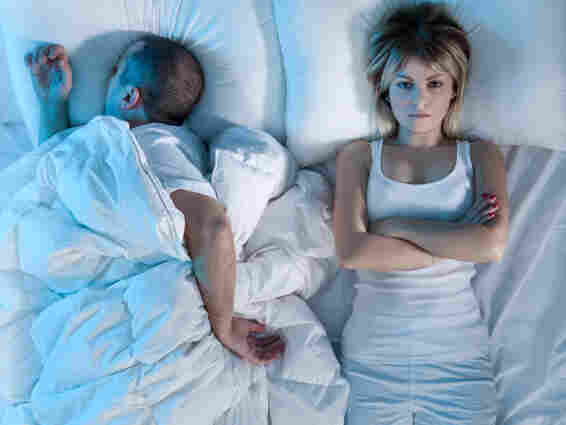 Studies have found that women report insomnia about 50 percent more often than men do. Their faster clocks may have something to do with it. iStockphoto.com hide caption 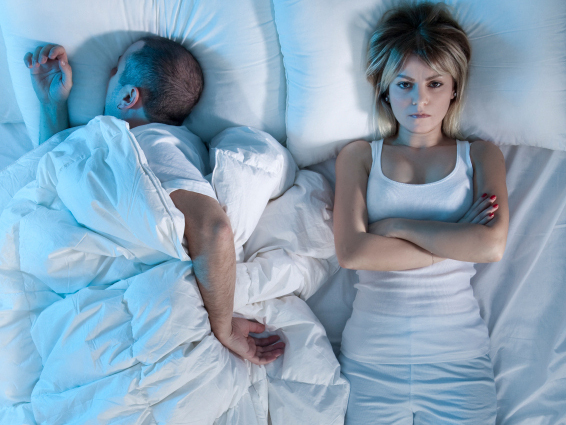 Studies have found that women report insomnia about 50 percent more often than men do. Their faster clocks may have something to do with it.

A new study shows that women run on a different clock than do men.

That is, the biological timekeeper deep in the brain that governs when we sleep and when we wake runs at a faster pace in women. The report, from researchers at Harvard-affiliated Brigham and Women's Hospital, appears in the Proceedings of the National Academy of Sciences.

The results have some interesting implications.

For instance, surveys have shown that women are more likely to identify themselves as early birds, while more men call themselves night owls (although there are lots of exceptions). The new findings may explain why.

Earlier studies have found that women report insomnia about 50 percent more often than men do. Their faster clocks may have something to do with it — or at least with certain types of early-waking insomnia.

The new study was done in 157 people who spent up to eight weeks in a windowless sleep lab in Boston, isolated from all cues about what time it was in the outside world. That allowed their inner clocks to drift according to each person's natural circadian rhythm.

"What we found was that the cycle length of the biological clock in women was shorter on average than it was in men," says Jeanne Duffy, a study author. "The average difference was about six minutes."

She concedes that six minutes doesn't sound like much. But imagine you have a watch that runs six minutes too fast. If you didn't reset it, you'd get more and more out-of-sync with the 24-hour cycle that we all have to live by.

I think many women are chronically sleep-deprived because of their work obligations: They're taking care of children, helping them with homework — whatever is happening that can only be done in the evening hours.

Also, sleep scientists know that even a small variation in people's circadian cycles gets amplified by such factors as when in their cycle light strikes the eye.

By the way, we all have to reset our biological clocks each day, because nobody has an inner clock that's set to exactly 24 hours. (If it was, we couldn't adjust to seasonal differences in the length of nights and days. And jet travel would be a real problem because we couldn't adjust to different time zones.)

In fact, some women — more than 1 in 3 — have inner clocks that run especially fast. They complete a daily cycle in less than 24 hours.

"If your cycle length is shorter than 24 hours, you need evening light to keep you synchronized," Duffy says. And such people should get blackout shades for the bedroom so morning light is as dim as possible.

That's just the opposite of people whose inner clocks run on a cycle that's longer than 24 hours. They need a dose of morning light to reset their biological clocks, and they should not get too much bright light in the evenings.

Maybe the biggest implication of the study is that there may be millions of women who have to fight against their inner clock every day to do what they need to do.

"I think many women are chronically sleep-deprived because of their work obligations: They're taking care of children, helping them with homework — whatever is happening that can only be done in the evening hours," Czeisler says. "That precludes many women from getting to bed early enough to get a full, sound night of sleep."

No doubt a lot of women can identify with that. But Czeisler also says many women don't see their early-to-bed, early-to-rise tendency as a problem.

"There are many women who really enjoy the fact that they can get up at 4 or 5 o'clock in the morning," he says. "They have peace and quiet. Before the rest of the world wakes up, they can get an extraordinary amount done — and they wouldn't trade it for the world."

Living With Your Circadian Opposite

Czeisler should know. He's married to such a woman: Dr. Theresa Shanahan.

Shanahan says she's at her most productive when the rest of her family is still in bed. "It's wonderful when I've accomplished four or five hours of work and the others are just waking up," she says, laughing. "I've had a good jump on the day."

Her husband likes to stay up late. "I'm definitely an evening type," he says.

Czeisler says when they first got married, he didn't realize they were circadian opposites. "We were so much in love that, you know, we probably didn't even notice the time of day," he says.