Accessibility links
Medicare: Saving Money Or Shifting Costs? At the heart of the Republican plan is a proposal to give everybody in the program a subsidy to buy private health insurance. Its supporters say it would reduce health care spending. But critics contend it allows the government to spend less on Medicare by making patients pay more — potentially a lot more. 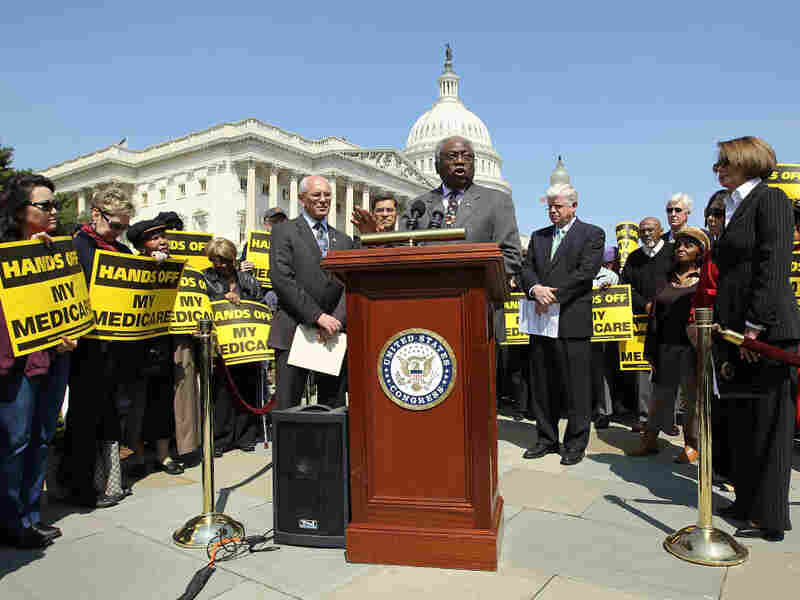 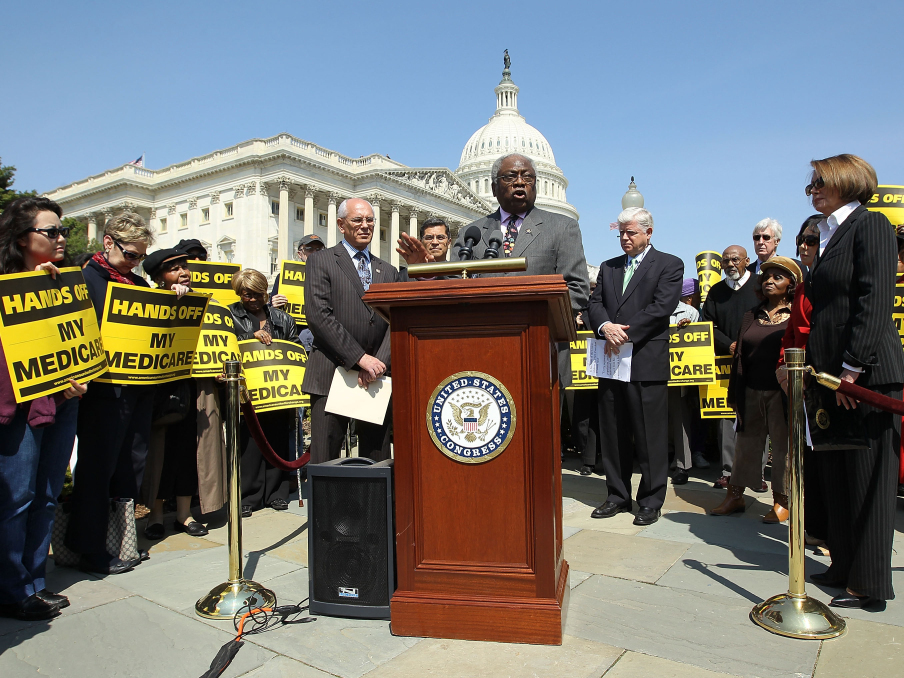 There's no debating that the budget blueprint passed by the U.S. House of Representatives last month would make major changes to the Medicare program for the elderly and disabled.

What Republicans and Democrats don't agree on, however, is whether those changes would actually save money or just shift costs now paid by the government to Medicare patients.

Rep. Paul Ryan (R-WI), who as chairman of the House Budget Committee wrote the plan that passed that chamber, says his plan would help bring down costs.

"We say, let 40 million seniors have choice, have power, and have those providers compete against each other for their business so they're in charge of their Medicare," he said during the House debate.

"I mean, it's not hard to save the government money if you're willing to just say, 'Here, you pay for it,' " the president said at a town hall meeting in northern Virginia two weeks ago. "That's not a solution."

At the heart of Ryan's plan for Medicare is a proposal to give everybody in the program a limited pot of money every year instead of the government-run health insurance they get now. But it's not really a pot of money. Technically, it would be a subsidy they could only use to buy private health insurance.

Rep. Paul Ryan says his plan for Medicare would work the same as the health care plan that he now gets as a member of Congress. Under the Ryan plan, enrollees would get a fixed amount of money with which they would buy their own health plan; increases in that subsidy would be pegged to inflation. By contrast, Congress' health care plan has subsidies pegged to the rate of increase in health care premiums. Here's one scenario of how that difference could potentially play out in terms of the cost to enrollees:

Ryan says the plan would make Medicare work just like the health insurance he gets as a member of Congress.

"Look at all these plans we get to choose from," he said, reading from the federal employees health plan handbook on the House floor during the debate. "Kaiser, Aetna, Blue Cross/Blue Shield, Coventry — pages and pages of choices and options. This is what we're talking about for people [ages] 54 and below."

Or not. "It's not at all what you'll have," says Austin Frakt, a health economist at Boston University who co-authors a health blog called The Incidental Economist.

Frakt says one key advantage of the health plans available to members of Congress is that the subsidy they get to pay their health insurance premiums keeps up with rising health care costs.

"It keeps pace, it doesn't erode over time," he says.

That wouldn't be the case with Ryan's Medicare plan. It's designed so that the amount seniors get to buy insurance would only go up as fast as inflation in the rest of the economy. Frakt says that could be a big problem. Health costs tend to rise much faster, sometimes twice as fast, as overall inflation.

In other words, Ryan's plan allows the government to spend less on Medicare by making patients pay more — potentially a lot more.

To see exactly how much more, we did a little math experiment.

The most popular federal worker health plan is the standard option Blue Cross/Blue Shield Plan. Its total annual premium this year is just under $7,000.

The government (the employer in this case) pays just under 70 percent of that amount, and the workers (including members of Congress) pay 30 percent.

Say next year the plan's total premium rises to $7,500; that would be a fairly modest increase of about 7 percent. Under the federal plan, the government still pays that 70 percent. So, Frakt says, using the new total, "70 percent of that is $5,250, and the difference would be what enrollees pay ... $2,250."

That's a total annual premium increase for federal workers of $150.

Assume, just for comparison's sake, the first year the government provided the same $7,000 for an individual. (The subsidy would likely be considerably higher, since seniors tend to have more health problems, and their health care costs more). And assume that the first year that subsidy would be enough to cover the full cost of a low-cost insurance plan.

What happens to the subsidy, then, when that plan's cost rises to $7,500 the next year?

"It depends on the inflation rate," Frakt says. "But say inflation was essentially zero, the subsidy would stay the same. So that increase in $500 in the premium would be entirely paid by the beneficiary."

In other words, the increase for the Medicare patient would be more than three times higher than the one for the federal employee. And each year, the Medicare enrollee would be responsible for that difference between overall inflation and health inflation.

Now, Ryan and his supporters dispute that exercise. They say their plan has elements that actually would reduce health care spending.

For example, Michael Cannon of the libertarian Cato Institute says having people spend their own money, rather than the government's, helps.

"They'll be cost-conscious consumers, they'll choose economical health plans, they'll put downward pressure on prices, because they will get to see the savings," he says.

At the same time, Cannon adds, more competition within the health care industry will also help hold down prices.

"Because in order to capture the business of those cost-conscious consumers, health plans, providers, will have to find ways to cut costs while improving quality," he says.

So far the Ryan plan is barely more than an outline. And it's going nowhere in the Democratic-led Senate. But it's an important marker in the emerging Medicare debate.

And that debate comes with more than a few political perils. Medicare clearly needs some kind of fix to withstand the onslaught of 78 million baby boomers.

But so far, public opinion polls show that neither Republican nor Democratic voters favor any big changes to the program.