Accessibility links
Bin Laden Death Fuels Afghan War Debate Though there are still forceful advocates of a strong, continuing U.S. military presence in Afghanistan, Osama bin Laden's death has broadened calls for Obama to draw down troop levels there in favor of a more limited, targeted hunt for terrorists. 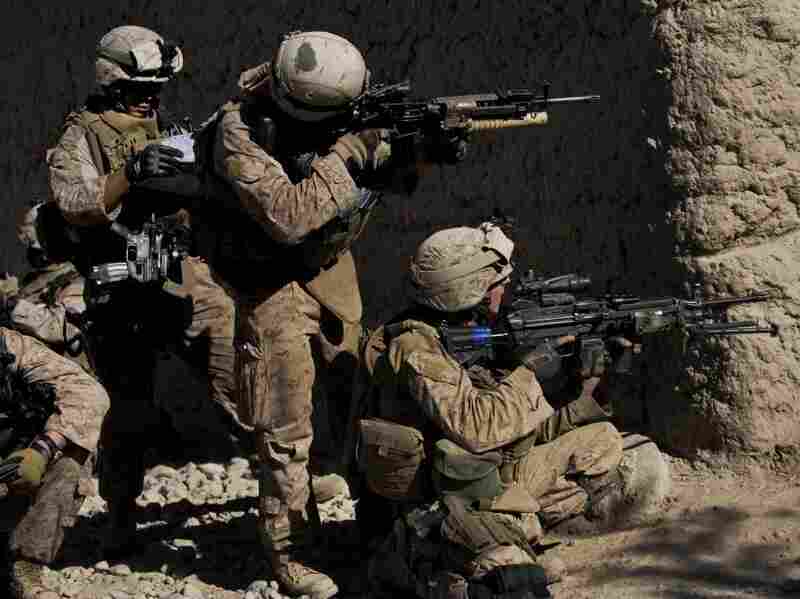 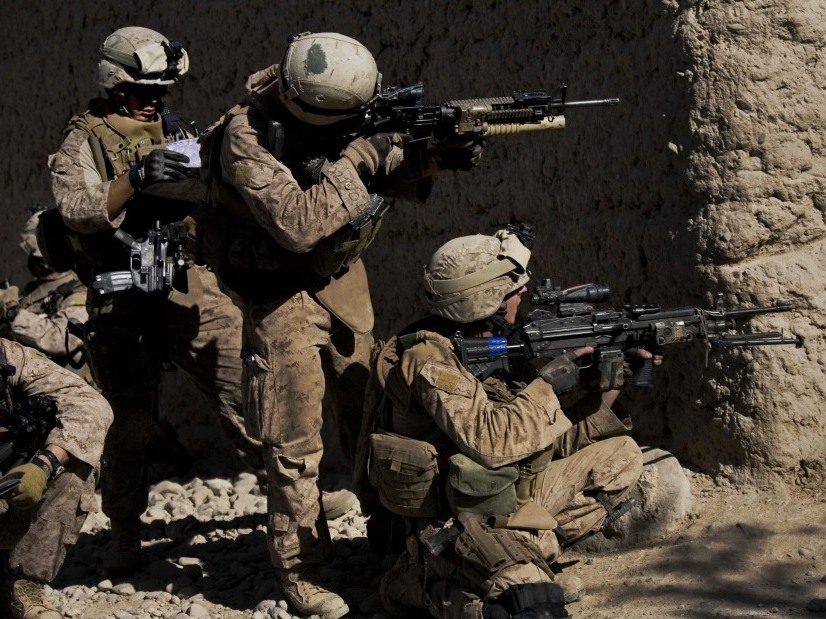 Marines take cover as a shot is fired last November in Sangin, Afghanistan.

The death of Sept. 11 mastermind Osama bin Laden in Pakistan has brought to full boil the long-simmering debate over the current aims and merits of the nation's 10-year war in Afghanistan.

And though there are those still making forceful arguments for sustained military engagement in the country that harbored bin Laden and his al-Qaida operatives after the 2001 attacks, his demise has broadened and intensified calls for the U.S. to get out.

Or at least for President Obama to redefine the mission from one that has evolved into nation-building to a limited counterterrorism effort that acknowledges vexing facts on the ground in Afghanistan — including the durability of the Taliban — and the greater threat in next-door Pakistan.

"In theory, several more years of intense U.S. military effort will provide the time and space required to train up the Afghan army and police and weaken the Taliban so they no longer constitute an overwhelming threat," Afghanistan expert Richard Haas said during a Senate hearing Tuesday.

But Haas, Afghanistan coordinator for President Bush after Sept. 11, said he doesn't buy that theory.

"I am deeply skeptical that this policy will work given the nature of Afghanistan and the reality that Pakistan will continue to provide a sanctuary for the Taliban," he said.

Obama has said he'll begin a partial withdrawal of troops from Afghanistan in July; the number and speed have yet to be revealed and are evolving given bin Laden's death and new questions about Pakistan's role in harboring the terrorist.

Poll results released Tuesday by the Pew Center for the People & the Press and The Washington Post show that the killing of Osama bin Laden boosted public confidence in the ability of the U.S. to achieve its goals in Afghanistan. But Americans remain divided on whether troops should remain in Afghanistan or come home as soon as possible.

— 63 percent of those surveyed believe that the U.S. will succeed in Afghanistan, up from 49 percent in December.

— 47 percent said that the U.S. should keep troops in Afghanistan "until the situation has stabilized."

— 48 percent said that U.S. troops should be withdrawn from Afghanistan "as soon as possible."

The survey also found that 85 percent of Americans believe that the U.S. will need to take "further military actions" to reduce the threat of terrorism to the United States.

There is an issue on which both critics and supporters of a large and continuing military presence there can agree: Barriers to success in establishing what the U.S. considers a stable central government in Afghanistan remain high and stubborn.

Corruption. The continued clout of the Taliban. Tribal divisions. And, perhaps most important, the unreliability of the U.S.'s own hand-picked leader, Afghan President Hamid Karzai.

"Karzai has been a problematic partner," says Lisa Curtis of the conservative Heritage Foundation.

But Curtis is among those who argue that it's only been in recent years that military efforts in Afghanistan, diminished after the U.S. intervention in Iraq in 2003, have been given the proper attention. She says gains are being made despite hurdles.

"This is the wrong time to talk about withdrawing U.S. troops," Curtis says. "We simply cannot allow the situation to go back to Taliban rule that would provide a safe haven for international terrorists.

"We have made this tremendous step, and now is the time to finish the job," she says.

Her Heritage colleague, James Jay Carafano, argues the same: Finish the job in Afghanistan and Iraq, he says, characterizing strong U.S. engagement in Afghanistan as "vital to continuing to press Pakistan to go after the Taliban and al-Qaida leadership in its own backyard."

But there is a growing chorus of politicians and national security experts who argue that the cost of prosecuting a war whose current aims have proved elusive has become indefensible in terms of money, lives and attention.

Indiana Sen. Richard Lugar, the ranking Republican on the Senate Foreign Relations Committee, said during a hearing Tuesday that he sees no strategic value in the Afghan war, noting that al-Qaida there had been "largely displaced."

Committee Chairman Sen. John Kerry (D-MA), who titled Tuesday's hearing "Afghanistan: What is an acceptable end-state, and how do we get there?" has acknowledged that there may be "no military victory to be had in Afghanistan" despite the skill and efforts of U.S. troops.

During the hearing, Kerry, who will travel to Afghanistan later this month, said that bin Laden's death "deals an enormous blow to al-Qaida's ability to operate."

But he said that the U.S. can't just "pack up and leave" Afghanistan, as some have urged.

"We have to ask at every turn if our strategy in Afghanistan is sustainable," he said. "Our military and civilian strategies need the support in Afghanistan that is viable, as we transition and draw down our forces."

"We're bogged down in a country where there's never been a strong central state," Cronin says. "The threat remains, but this allows us to reassess how we deal with it."

Cronin is among those who argue that the U.S. has to "give up the illusion that there will be an Afghan state that will take over, and be realistic about what we can accomplish as a foreign power so far away."

He dismisses the withdraw-all-troops-now crowd as naive. "We start where we are," he says. Withdrawal, he argues, needs to occur hand-in-hand with a new doctrine that focuses on targeting high-value terrorist targets, learning to accept local governments that the U.S. may not like, and a heavier reliance on diplomacy.

"The ability to neutralize the most dangerous terrorist groups that emerge in and around Afghanistan at a much more acceptable cost," he says.

What was once seen as a war of necessity, says Haas, has become a war of choice in a place he no longer considers a significant global terrorist threat.

Obama, in the 2009 speech he used to announce his plans to send additional troops to Afghanistan, said: "Our overarching goal remains the same: to disrupt, dismantle and defeat al-Qaida in Afghanistan and Pakistan, and to prevent its capacity to threaten America and our allies in the future."

The question of whether this president will declare that mission largely accomplished in Afghanistan, and what he plans to do to discourage the country from again becoming a haven for terrorists like bin Laden, will be answered in coming months.

Until then, politicians, experts and the American people will continue to grapple with the value of an expensive war, in a place often referred to as the "graveyard of empires."