Accessibility links
Foreign Policy: Killer SEALs In The Making As details of the death of Osama bin Laden emerge, one thing has become clear: the U.S. owes a great deal of gratitude to Navy SEAL Team 6, whose 40 minute mission ended with the death of the Sept. 11 mastermind. But who are the Navy SEALS? Photographer Stephanie Fried-Perenchio of Foreign Policy investigates. 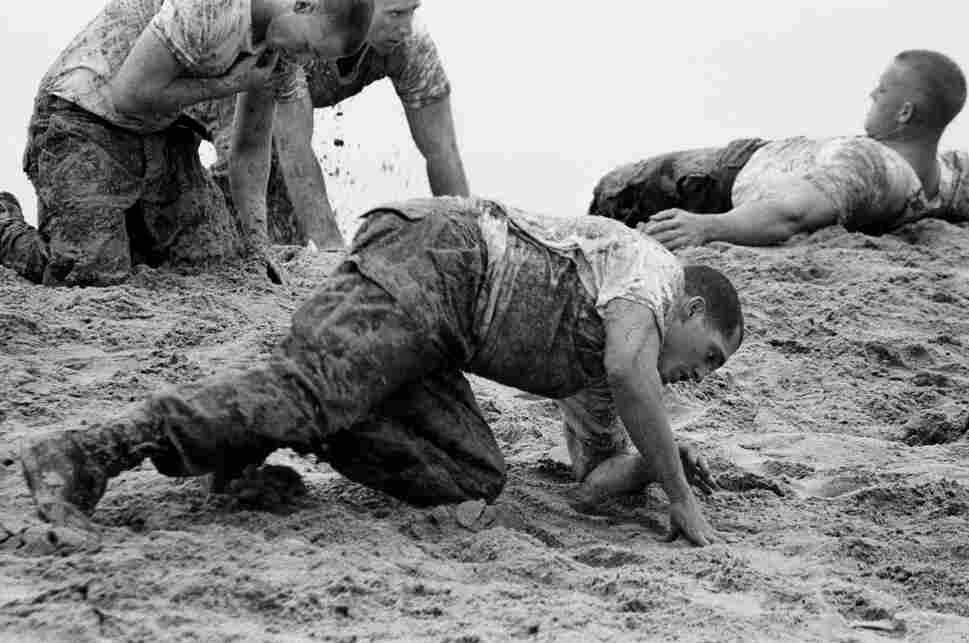 A drill known as "wet and sandy" is a near-daily occurrence/punishment during training. Prospective SEALs are made to repeat multiple cycles of swimming several miles, running several miles, and rolling through sand. Stephanie Freid-Perenchio hide caption

The United States Navy SEALs are generally acknowledged to be among the military's most elite special operations units, arduously selected and trained for missions in the most extreme and pressing circumstances. It's not surprising then that the SEALs were selected to perform the risky operation that ended with the killing of Osama bin Laden in Abbottabad, Pakistan, on Sunday, May 1.

In addition to their efficiency and bravery, SEALs are known for their secrecy. The general public rarely is afforded the chance to peek behind the curtain, to observe the SEALs in preparation or in action. It was thus a particularly rare opportunity that Stephanie Freid-Perenchio received permission from Vice Adm. Robert Harward to photograph Navy SEALs in training, gaining unparalleled access. The photos in this slide show — selections from her book SEAL: The Unspoken Sacrifice — are a testimony to the personal commitment and camaraderie of a elite military team that all-too-often works only in the shadows.

To see more of this slide show, visit foreignpolicy.com.