Accessibility links
Hong Kong Graffiti Challenges Chinese Artist's Arrest The face of Chinese artist Ai Weiwei has been spray-painted across Hong Kong in the month since he was detained. Many residents like the graffiti's aesthetic and message, but the campaign could lead to jail time for the graffiti artist. That has raised fears about the erosion of Hong Kong's freedoms. 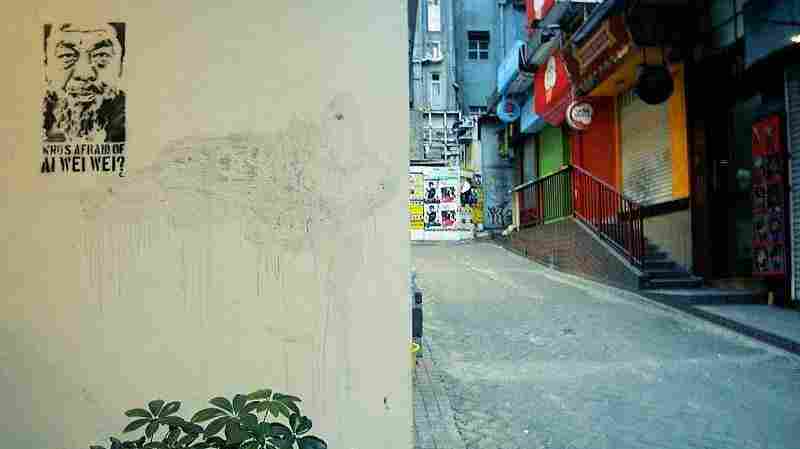 On Wednesday, an exhibit of Ai Weiwei's work opened in New York City — without the detained artist. The installation, called Circle of Animals/Zodiac Heads, is on a six-city tour. Each of the animal heads weighs about 800 pounds and stands atop a marble base.

Given his real-life circumstances — summarily disappeared at the hands of the Chinese authorities with no charges yet laid — the furrowed forehead and hooded, tired eyes of the image now seem a representation of suffering. Underneath his face is one simple question, "Who's afraid of Ai Weiwei?"

This graffiti, appearing all over Hong Kong, has become a political statement, more than a month after the world-famous artist was detained by the authorities at Beijing airport. The campaign could yet lead to a jail term for the young graffiti artist responsible. And that fact has led to fears about the erosion of Hong Kong's distinct freedoms, which are a legacy of its colonial past under the British.

Despite causing consternation for the authorities, many Hong Kong residents like both the graffiti's aesthetic and its political message.

"It's cool," says passerby Peter Chan. "The graphic is cool, and the presentation of protest against China is cool."

But as his words indicate, the immediate official reaction was literally a whitewash.

Crack teams of street cleaners took just three hours to remove or cover up many of the Ai Weiwei stencils sprayed around Victoria Harbor, while other instances of the same graffiti elsewhere were dispatched with similar speed. That's in stark contrast to other graffiti in Hong Kong, which is often ignored for months, if not years.

This campaign is the work of 22-year-old graffiti artist Tang Chin, also known as Tangerine, whose aim is to warn Hong Kong people that Ai Weiwei's detention does affect them.

"He's one of the most prominent contemporary artists in the world right now," she explains. "And if he can be arrested, then there's no identity we can hide behind: Being a Hong Kong citizen doesn't help anymore; being rich or social status doesn't help. There's no shield any more against this very naked power that's trying to engulf us." 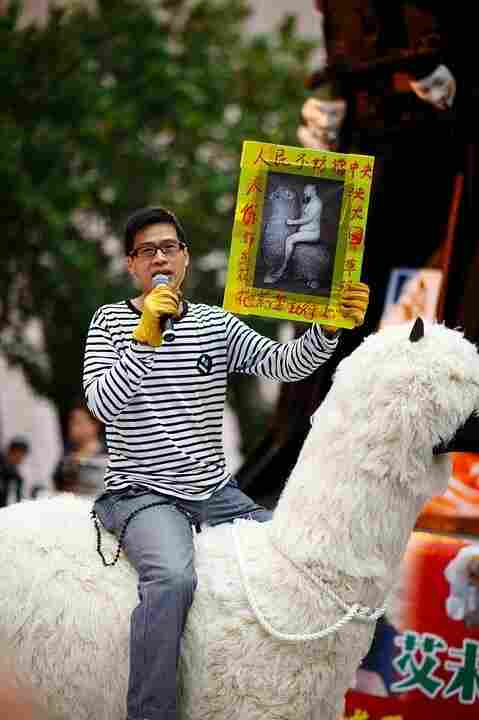 Kacey Wong, who helped organize a march in Hong Kong in support of Ai Weiwei, took along a homemade 6-foot-tall Grass Mud Horse, a mythical animal that Chinese netizens use as a way of indirectly criticizing government censorship. In his hand, he holds a picture of Ai Weiwei riding his own Grass Mud Horse. Man Chan hide caption 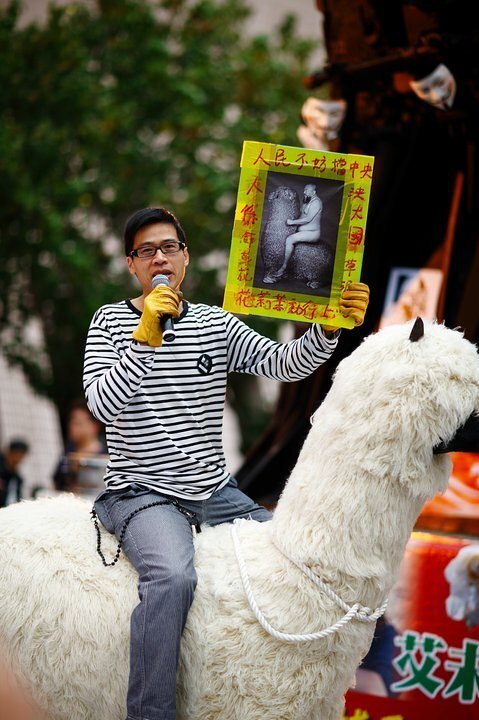 Kacey Wong, who helped organize a march in Hong Kong in support of Ai Weiwei, took along a homemade 6-foot-tall Grass Mud Horse, a mythical animal that Chinese netizens use as a way of indirectly criticizing government censorship. In his hand, he holds a picture of Ai Weiwei riding his own Grass Mud Horse.

Tangerine's graffiti campaign has turned her into an inadvertent counterculture icon. Few people know what she looks like. She's not exactly on the run, but a police unit is investigating criminal damage charges against her, which carry a maximum sentence of 10 years in jail.

Such a stiff sentence for graffiti is extremely unusual, especially since a lesser offense of "graffiti" exists, which carries a maximum penalty of a fine and three months' imprisonment. Stranger still, the investigating unit is a serious crime squad that usually deals with murder and rape, not vandalism.

Tangerine's unusual treatment unleashed a furor among Hong Kong's outspoken press. But she is unfazed, retorting, "I have to thank the police for drawing so much attention to this issue. Even if I have to go to jail, I think that would be a very, very worth it price to pay."

'An Issue Of Morality Rather Than Politics'

"For us, this is a big, big alarm," says local artist Kacey Wong, founder of a new concern group called Art Citizen. He believes recent events are galvanizing and politicizing local artists, who until now have lived in "a bubble."

About 2,000 of their number marched through Hong Kong's streets for Ai Weiwei on April 23. Some doused themselves in paint and others drummed, while Wong made his own slyly subversive statement, sitting on the back of a 6-foot-tall homemade Grass Mud Horse, an animal that bears some resemblance to an alpaca.

In his hand, Wong waved a photograph of a naked Ai Weiwei mounted atop his own Grass Mud Horse. This mythical animal is a political symbol of opposition to government censorship among Chinese Internet users. Its name sounds identical to a particularly obscene profanity, so it is used by netizens to circumvent official censors.

Now Wong fears that political censorship could be spreading to Hong Kong, which he worries could lose its special freedoms if people don't defend them. 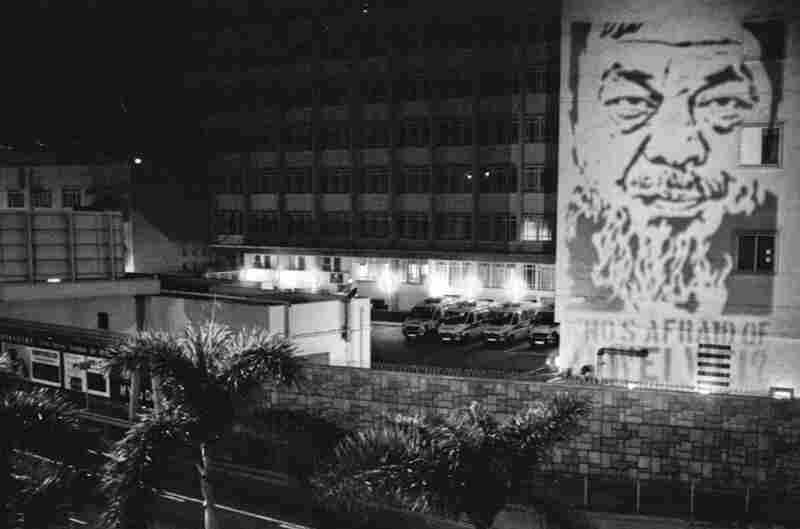 Flash graffiti of Ai Weiwei projected for a split second onto the Chinese People's Liberation Army barracks in Hong Kong. The PLA says this is a breach of the law. Cpak Ming hide caption 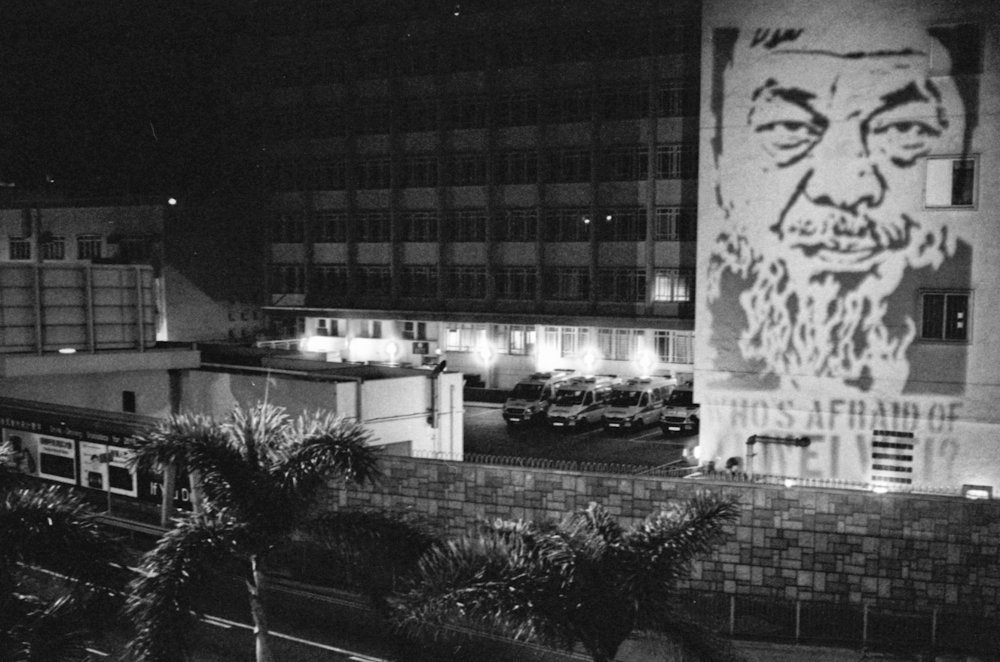 Flash graffiti of Ai Weiwei projected for a split second onto the Chinese People's Liberation Army barracks in Hong Kong. The PLA says this is a breach of the law.

"It's an issue of morality rather than politics," says Wong. "I think when you have a chance to voice out, you must voice out before it's too late."

And it appears the artistic community at least is paying heed. Now teams of people are downloading Tangerine's stencil of the detained artist from the Internet, to take on the work of spray-painting it around Hong Kong.

One art activist who calls himself Cpak Ming has even pioneered "flash graffiti": flashing projections of a supersized Ai Weiwei onto famous Hong Kong buildings for a split second.

His targets included a People's Liberation Army barracks. The PLA says this is a breach of law, and it reserves the right to act. Ming declined an interview with NPR, saying, "I just want to continue my work."

But the simple question the graffiti poses is, "Who's afraid of Ai Weiwei?" And the heavy-handed reactions of Hong Kong authorities do offer one answer: It seems many in Hong Kong's corridors of power fear the potency of his image.