Accessibility links
Decoding The Platypus Of The Plant Kingdom Amborella is the first known flowering plant and, like the platypus, a genetic dead end. Selaginella's relatives are the fossils in fossil fuel. Now, scientists are studying the genes of these plants, looking for clues about evolution and compounds that might be applied to medicine or agriculture. 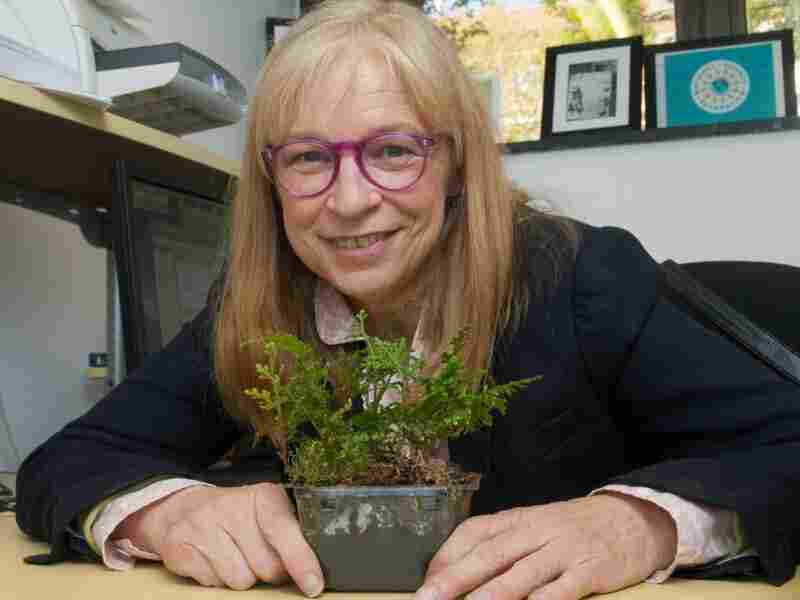 Jody Banks displays a selaginella plant at her desk at Purdue University. Banks says selaginella represents an important step in the evolution of plants and produces secondary metabolites that could have medical applications. Andy Jessop/The Purdue Exponent hide caption 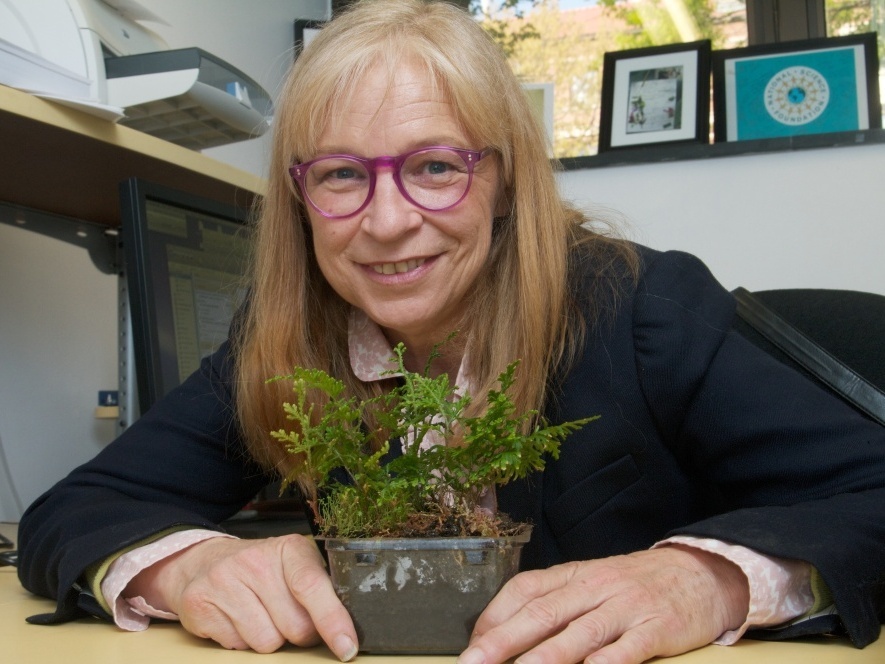 Jody Banks displays a selaginella plant at her desk at Purdue University. Banks says selaginella represents an important step in the evolution of plants and produces secondary metabolites that could have medical applications.

If you like being alive, you might want to thank a plant. Plants and their microscopic relatives provide the oxygen we breathe. They're also the source of the energy for the modern industrial world. And we eat them, too.

Probing the secrets of plants at the genetic level is all the rage these days among scientists seeking to understand how plants evolved on Earth.

One of those plants is selaginella, one of the first plants to develop a system of tubes that transport water and nutrients inside a plant.

"You can only reach a certain height before you have to have tubing to conduct the water from the ground to the top of the plant," says Jody Banks, a botanist at Purdue University.

Selaginella is a smallish plant, about 6 inches tall. It's found all over the world. Some varieties look a bit like a small Christmas tree. Selaginella turns out to be an important plant for modern civilization.

"When you burn coal today, actually the fossil fuel, the fossil is a fossil of the relatives of Selaginella," says Banks. How does she know selaginella and its relatives became coal? "Because you can go into a coal mine and you can see it, the whole plant, fossilized." Banks says selaginella represents an important step in the evolution of plants.

Since the mid-'90s, scientists have sequenced the genomes of dozens of organisms. Like selaginella, they were chosen because of their key role in scientific research.

In addition to tubing, selaginella makes something called secondary metabolites. These are compounds that aren't absolutely essential for the plant's survival but are useful to have around. An example would be the compounds that make the scents of a flower, or a chemical the plant produces that keeps pests away. It turns out that these secondary metabolites have been useful in medicine — the anti-cancer drug Taxol is an example.

As Banks reports in the current issue of the journal Science, selaginella is chock full of genes that make these secondary metabolites. "What that means is that selaginella is likely to make many, many, many secondary compounds, and they're most likely going to be unique."

Another important plant undergoing genomic analysis is amborella. Victor Albert, a biologist at the University at Buffalo, says amborella doesn't look all that important. "It basically just looks like a small tree or shrub with fairly nondescript leaves and relatively nondescript flowers," says Albert.

But those nondescript flowers turn out to be from one of the first flowering plants that evolved on Earth. "Somewhere around maybe 130 or more million years ago, the flowing plant first emerged. And the flower was a great innovation," says Pam Soltis, a botanist at the University of Florida.

Flowering opened up all sorts of new ways for plants to change and disperse. Soltis says what makes amborella so interesting is that it turned out to be a genetic dead end, like the platypus — a relative of all mammals but ancestor of none. Amborella is the sibling of all flowering plants, but unlike the other early flowering plants, it has no direct descendants. That makes it useful to plant geneticists.

"It provides a reference point for orienting all of the other changes that have occurred within the flowering plants," says Soltis.

Understanding the evolution of flowering plants and their genes is important for modern agriculture. It helps crop breeders understand how to capture the taste of wild plants.

Banks admits that the flowering plants, with their gaudy leaves and tasty fruit, are more important to farmers and gardeners. But she intends to keep her research focused on selaginella. "It's a survivor," she says. "It's been around hundreds of millions of years. And who knows, if there's another mass extinction, it may be what's left."

So if amborella is the platypus of the plant kingdom ... maybe that makes selaginella the cockroach. It's supposed to be a survivor, too.