Accessibility links
'This Is A Book' Of Demetri Martin's Musings And Miscellany Demetri Martin, the stand-up comedian famous for his Beatle-ish bangs and stream-of-consciousness onstage drawings, has now brought his doses of comedy to print. This Is a Book features essays, drawings, one-liners and charts, all penned in Martin's characteristically unconventional, understated style. 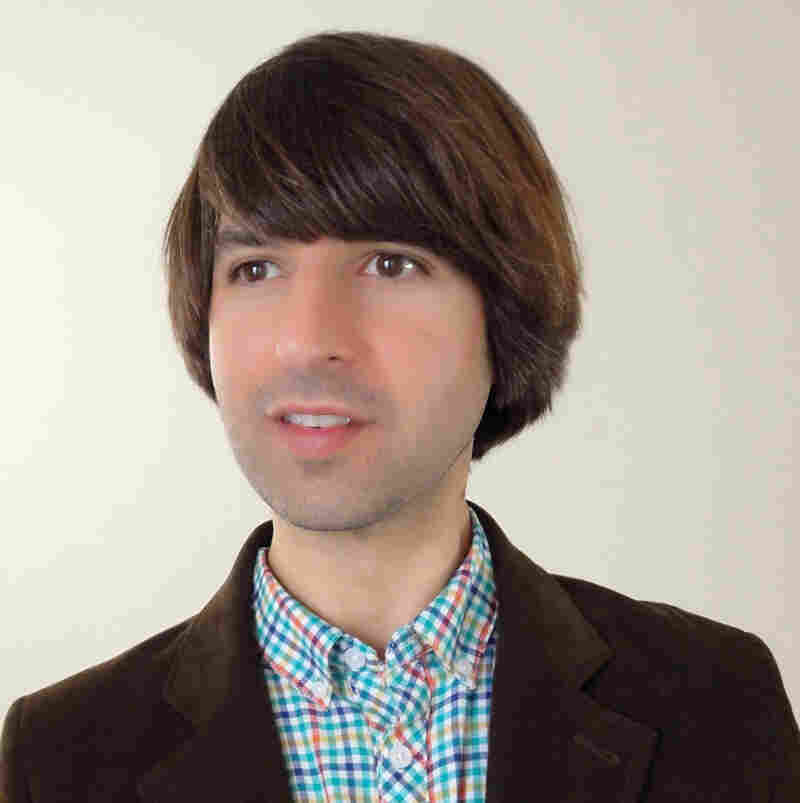 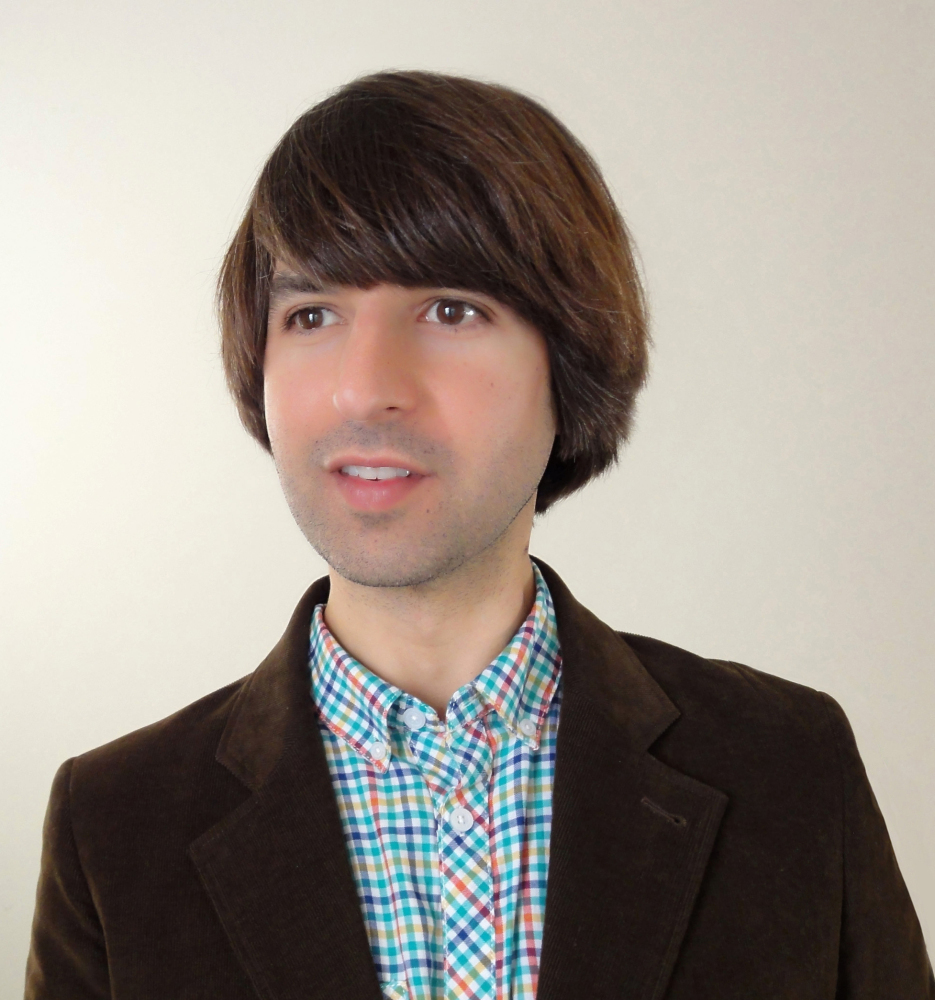 Demetri Martin, the stand-up comedian famous for his Beatle-ish bangs and stream-of-consciousness onstage drawings, has now brought his doses of comedy to print in his first book — and it's appropriately titled This Is a Book.

This Is a Book features essays, drawings, one-liners and charts, all penned in Martin's characteristically unconventional, understated style. He talked with Morning Edition's Linda Wertheimer about his new material, and his jump from the stage to the page.

From the section of his book called "Charts and Graphs," he includes a pie chart titled "Types of Breath." He explains, "On the left, there is good, and on the right, there is bad. That's about 50 percent each, but there's a tiny sliver in the middle for interesting breath, which is a very small portion of all the breath in the world." 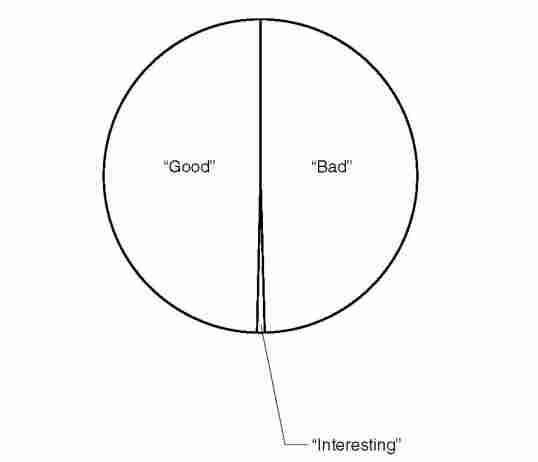 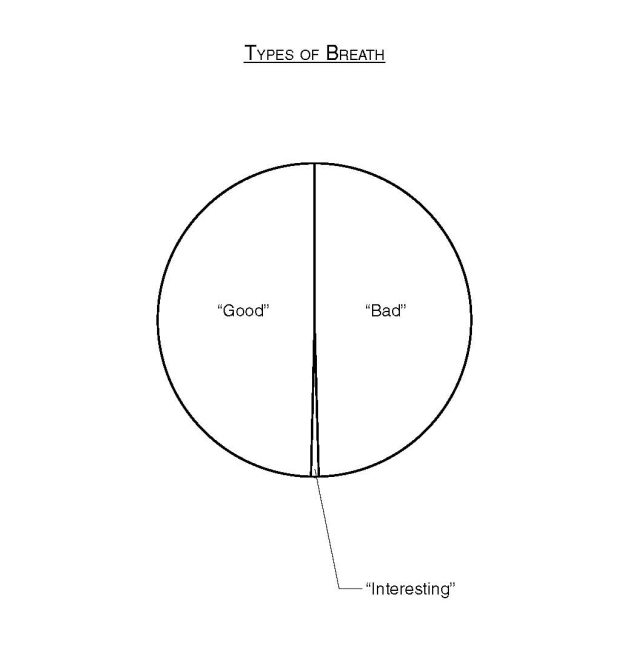 "It's pretty binary," he adds.

In another section, "Epigrams, Fragments and Light Verse," Martin echoes his stand-up style with brief but hilarious snippets. "They are short little ideas, so I could just put a sentence or two, and then move on to the next one," he says.

They range from tongue-in-cheek to wryly clever:

"The bird, the bee, the running child are all the same to the sliding glass door."

"Nothing wise was ever printed upon an apron."

"Let no man's deathbed be a futon."

"I wish this poem were longer.
There, that's better." 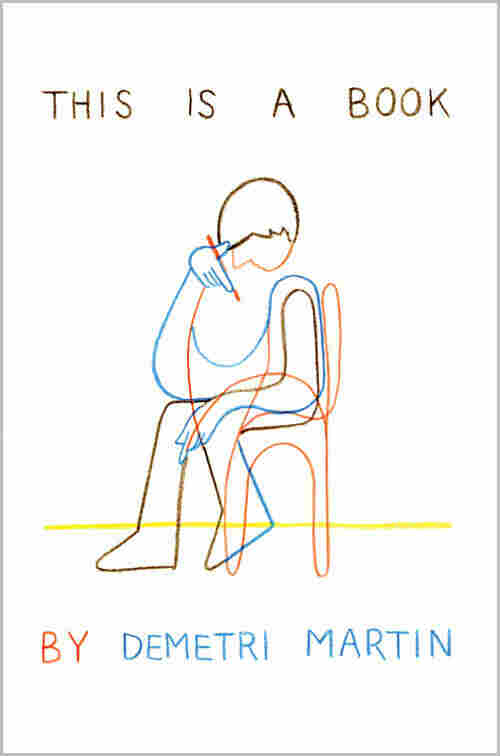 Martin jokes that most of his material is short and inane, but his section on palindromes reveals his keen talent for wordplay.

A palindrome is, at least functionally, "a phrase or sentence that you might say that might create awkward silence with other people," Martin says with a laugh. But he adds that it's also a sequence of letters or words — even sometimes numbers — that reads the same forward or backward.

Martin calls his collection of palindromes "Palindromes for Specific Occasions," and includes a description with each one to clue readers into what it describes. In one example, a head baker at a bakery is instructing a new employee about how to deal with customers, when he suddenly notices what the new baker has made.

"It's pretty deep stuff I put in the book here," Martin says with a laugh.

Martin also likes to use drawings in his act — in fact, sketching on a large pad of paper was a trademark of his Comedy Central show Important Things with Demetri Martin. So, naturally, Martin uses sketches in his book, too.

One features a "Narcoleptic Pole Vaulter," a sleepy — and unfortunate — athlete who is impaled at the end of a pole, not quite all the way over, and just stuck hanging. 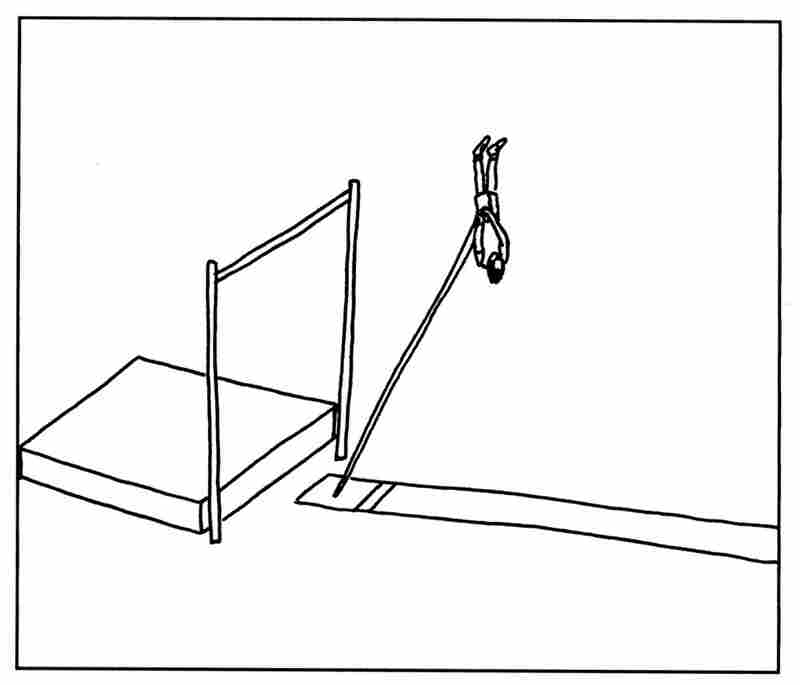 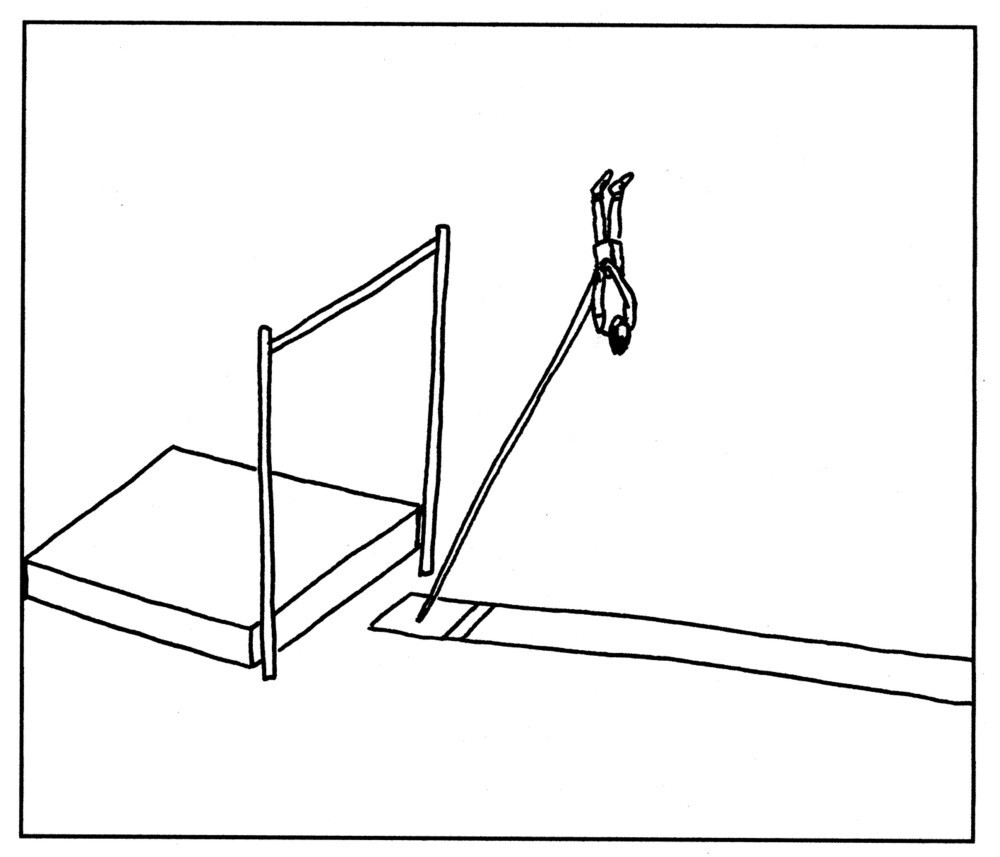 "I captured the moment just when he dozed off," explains Martin. "I love imminence. I love catching a snapshot of something that is just about to happen. Or maybe something that just happened, you know. But I like especially that just-before kind of feeling."

He translated these sorts of proclivities into his book, but it wasn't easy. When it comes to gauging his material, Martin is used to the immediate reaction of a crowd.

But Martin rose to the challenge, and even poked fun at some book conventions themselves. After all, This Is a Book is dedicated to ... everyone. On the dedication page, it simply says, "For you."

Excerpt: 'This Is A Book'

Thank you for coming to the show. Before tonight's performance begins there are a few announcements. Please pay attention.

Flash photography is not permitted at any time during the show. Also, there is no recording of any kind allowed during the show. This includes both audio and video recording, as well as sketch­ing, journaling, documenting, making mental notes reminiscing, reviewing, or remembering anything at all with your mind. Any recording devices that we find will be taken away from you and juggled recklessly by the clown you see standing near the left exit.

You are not permitted to lip‑sync any portion of the show. If you do and we catch you, one or both of your lips may be removed from the building.

In the event of a fire, please use the fire exits — but not the one on the right wall. That one is just a supply closet with a sign that says "fire exit" over it. Do not open that door. There are explosives behind it.

It is illegal to yell "fire" in a crowded theater. If there is a fire, please yell something else instead, like "Flames!" or "Smoke maker!" or "Bad hot!"

Please refrain from smoking during the show. Anyone who is caught smoking will be shot with our meat gun.

Fighting will not be tolerated in the theater at any time. If you have a problem with someone, please see one of our blow dart vendors.

If you talk during the show you will be asked to leave and may be forced to talk for up to 72 hours straight in our "chatter chamber."

If someone is making too much noise, do not say "Shhhh," unless you want to get squirted with the hose.

Please keep the number of "Whoos!" to two or fewer per per­son. If you exceed this number (which our whoo counters will be watching for) you will receive an electric shock of memorable force.

Do not heckle the performer. Heckling is strictly prohibited. Making a noise that sounds like "Psstuhh" while judgmentally shaking your head is also not permitted. If the performer dives off the stage and you move out of the way, then you will be "dived" right out of the building. Also, crowd surfing is prohibited unless you have a body that most people in the crowd would want to fondle.

We do not allow dwarf tossing. If you toss a dwarf, the dwarf will be tossed right back at you, but faster.

Drunken behavior will not be tolerated, except by those who are being hilarious.

Please turn off all cell phones and pagers. And if you have a pager please return it to the '90s.

While it is not legally prohibited, we ask that you do not call anyone "dawg" during the show. Also, please note that anyone named "L Train" will be rolled down the stairs.

If, at any time, a security person asks you to leave, please do not resist. However, if it is Earl, please resist.

Please do not sit on your boyfriend's shoulders during the show (women with perky breasts can ignore this rule).

A man in a trench coat may offer you a glow stick at some point during tonight's performance. Do not accept the glow stick unless you're prepared to accept it right up your nose.

If you are choking, please stop it, because it is prohibited.

There is a significant risk that you will be hit with a tambou­rine at some point during tonight's show. Also, the person seated in row G, seat 28 will be catapulted later into the small hammock that is hanging between the rafters.

By entering this venue you consent to being filmed, recorded, taped, taped‑up, watched, studied, and smelled. You also con­sent to having your image duplicated, stretched, plastered, mocked, mimicked, misrepresented, and printed on any promo­tional materials, including but not limited to T‑shirts, panties, silly aprons, propaganda posters, pasties, jockstraps, and com­memorative yarmulkes.

If you happen to be standing near the confetti cannon, do not be alarmed if you lose your ability to see and/or hear for up to six months.

Not responsible for lost or stolen limbs.

Finally, please do not fall asleep during the show. If you yawn, a marble or small pellet may be carefully tossed into your mouth.

Now, sit back, relax, and enjoy the show. If you don't, then be prepared to suffer the consequences. On with the show!

From This Is A Book by Demetri Martin. Copyright 2011 Demetri Martin. Excerpted by permission of Grand Central Publishing, a division of Hachette Book Group USA (HBGUSA). 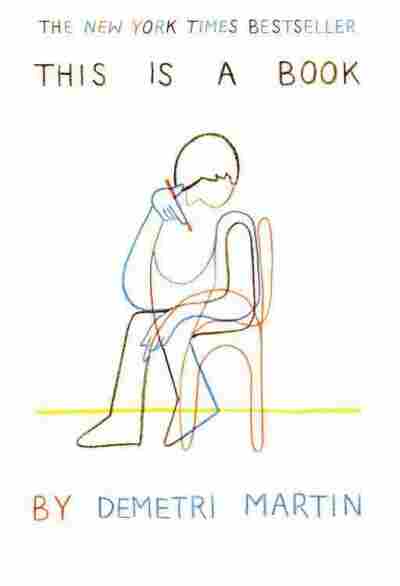 This Is a Book

Title
This Is a Book
Author
Demetri Martin