Accessibility links
Will Ferrell Ends His Short-Lived 'Office' Run And Promises He's Not The New Boss Will Ferrell says he never intended to stay around on The Office for even as long as he has, and as tempting as it might be, he's not staying on past the four episodes that are planned.

Listen to Will Ferrell 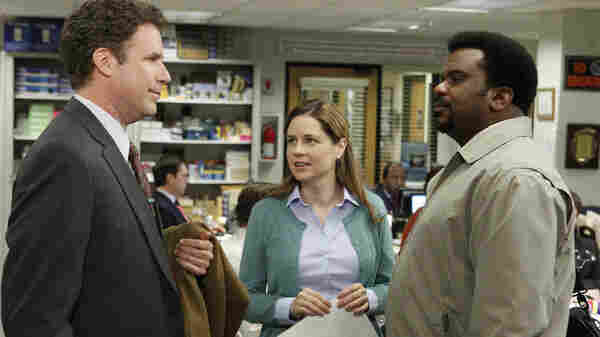 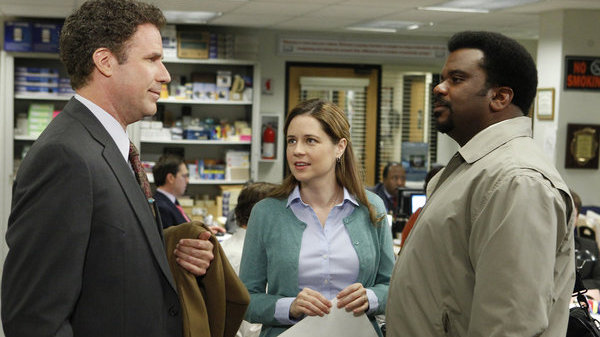 Listen to Will Ferrell

Steve Carell's Michael Scott lasted as the boss of The Office for seven seasons until he moved to Colorado on last week's episode to live in Colorado with his fiancée.

His replacement has not fared so well.

From the beginning, Deangelo seemed like a terrible fit for Dundler Mifflin. He was not only bland, but mean. He had none of Michael's offbeat sense of fun, and made a disastrous appearance at Michael's beloved Dundie Awards. Last week, he even revealed himself to be a terrible salesman. And as if that weren't enough, promos for tonight's episode show him exhibiting sexism that would make Ron Burgundy proud.

Ferrell — the actor — has been a much better fit on The Office. He's certainly given the show's ratings something of a bump. But more than that, by making Vickers so unlikable, he helped viewers realize how much they're really going to miss Michael Scott.

Ferrell told Morning Edition's Renee Montagne, in a discussion you'll hear more of next week, that it was his idea to appear on The Office, but just for a quick guest spot. But, wanting to get as much mileage out of Ferrell as possible, the writers came back to him and asked if he would do a whole character arc.

"I really haven't done much episodic television, and I really didn't have much going on in terms of film and production, so I said absolutely, I would love it," Ferrell told Montagne.

"It was a little intimidating at first because that cast is like a well-oiled machine and they know each other so well," said Ferrell.

NBC has been guarding the identity of the next boss of Dunder Mifflin Scranton with the intensity devoted to a state secret, but it will definitely not be Ferrell, although he admits to being momentarily tempted to stay.

"They shoot very close to where I live," said Ferrell. "They shoot very quickly. There's such a free flow to the improvisational style, and the writing is really sharp. I did see why people love working on that show."

As for what Ferrell will do next, he's starring in a send-up of telenovelas called Casa de mi Padre (House of my Father), which will open later this year. If you haven't seen the trailer, it's well worth a look. Interestingly, Ferrell will only speak Spanish in the movie.

He takes an arguably bigger departure from his usual work with the release next week of Everything Must Go, an indie drama where he plays a newly unemployed alcoholic who lives on his lawn because he's been kicked out the house by his wife. Comedy, this ain't.

Ferrell will talk about the role next Thursday on Morning Edition.

Ben Bergman is an assistant producer for NPR's Morning Edition, based at NPR West.