Accessibility links
World's Farmers Feel The Effects Of A Hotter Planet As world grain prices hover near record highs, a new study finds that rising temperatures have already harmed corn and wheat production. Analysts predict even higher food prices due to damage from climate change, and the poor in developing countries will be hurt the most. 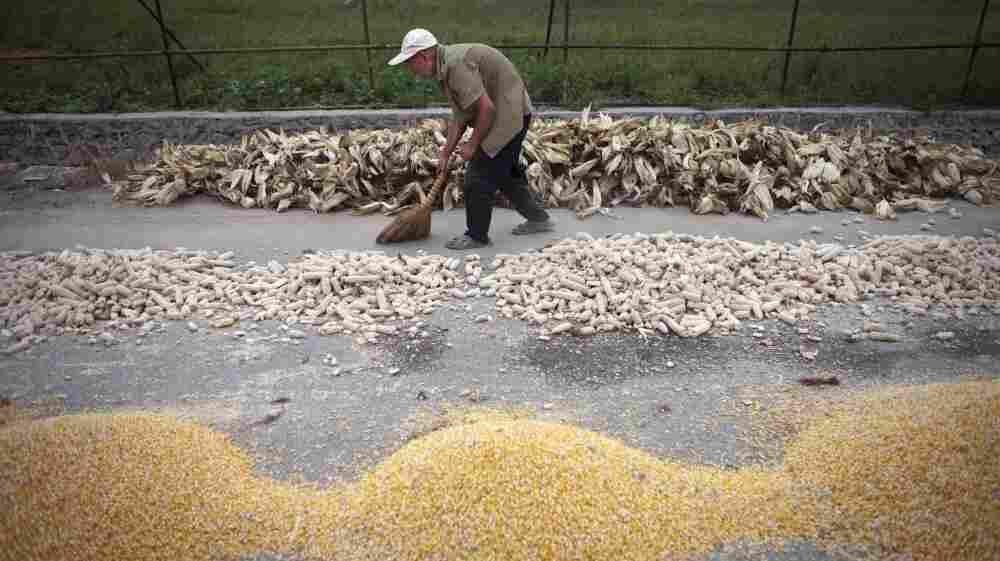 A Chinese farmer sweeps up dried cobs and stripped corn on a roadside outside Beijing. A new study finds that global production of corn and wheat would have been 5 percent higher if not for global warming. Alexander F. Yuan/AP hide caption

Scientists have long predicted that — eventually — temperatures and altered rainfall caused by global climate change will take a toll on four of the most important crops in the world: rice, wheat, soy and corn.

Now, as world grain prices hover near record highs, a new study finds that the effects are already starting to be felt.

"For two crops, maize [corn] and wheat, there has actually been a decline in yields, if you account for the trend in climate — especially the warming trend that we've observed over the last 30 years," says Wolfram Schlenker, who teaches environmental economics at Columbia University. He's a co-author of the study, along with David Lobell and Justin Costa-Roberts at Stanford University.

The scientists looked specifically at places where there are warming trends, and sure enough, they found these staple crops weren't doing quite as well.

For rice and soy, declines in some places were offset by productivity boosts elsewhere in the world, so there was no overall change. But they did see a change for wheat and corn.

The losses caused by warming thus far are still smaller than the gains made though improved agriculture.

"We're not saying yields have gone down, just to make this clear," Schlenker says. "What we're saying is yields are lower than they would have been without the climate trend. So yields have still been going up over the last 30 years."

The study, published online by Science magazine, shows that these crops have declined about 5 percent over what they would have been in the absence of warming. That sounds small, until you consider that globally, these crops are worth about $1 trillion a year. Five percent of $1 trillion is $50 billion, "which I think is quite sizable," Schlenker says.

And that number is probably just the beginning. Gerald Nelson at the International Food Policy Research Institute in Washington, D.C., says that as the planet heats up in the coming decades, the 5 percent loss today could easily grow to 20 percent.

"Definitely do not consider shrugging that off," he says. "We can expect to see higher prices that are going to cause problems around the world."

And most of those problems hit people who can afford it the least.

Here in the United States, a doubling of wheat prices might only add a dime to the cost of a $2 loaf of bread, he says. But double the price of rice, and people who fill their food bowl with that grain every day will really feel it.

Americans are also insulated from this effect for another reason. The new study found that the effects of warming have not been felt evenly around the world.

"The one big exception we actually found is the United States," Schlenker says. "This is the one place that doesn't have a big temperature trend."

And since America's breadbasket has not warmed, American grain farmers have been fortunate. Professor Gene Takle at Iowa State University says farmers in the Midwest have instead dealt with a long-term trend of additional rainfall in that area.

"Farmers are very good at adapting to climate change," he says. "And when the ranges of climate are not too extreme, they can and they are adjusting."

Midwestern farmers have adapted to the added wetness by spraying more pesticides to control fungus, by planting more per acre, and by buying bigger machines to cope with the wetter fields, he says. And Takle says the farmers will surely be able to adapt to at least some degree of warming, which is likely sooner or later.

"That's a real critical issue — what is the range of temperature or climate conditions to which we can adapt, and when do we exceed those?"

Many other farmers around the world are already starting to find out where those limits lie as they confront higher temperatures.