Accessibility links
Robust Jobs Report: Blue Skies Ahead? Employers in April added more than 200,000 jobs for the third straight month, the biggest hiring spree in five years. The increase of 244,000 was larger than analysts had expected. But the unemployment rate rose to 9 percent from 8.8 percent in March. 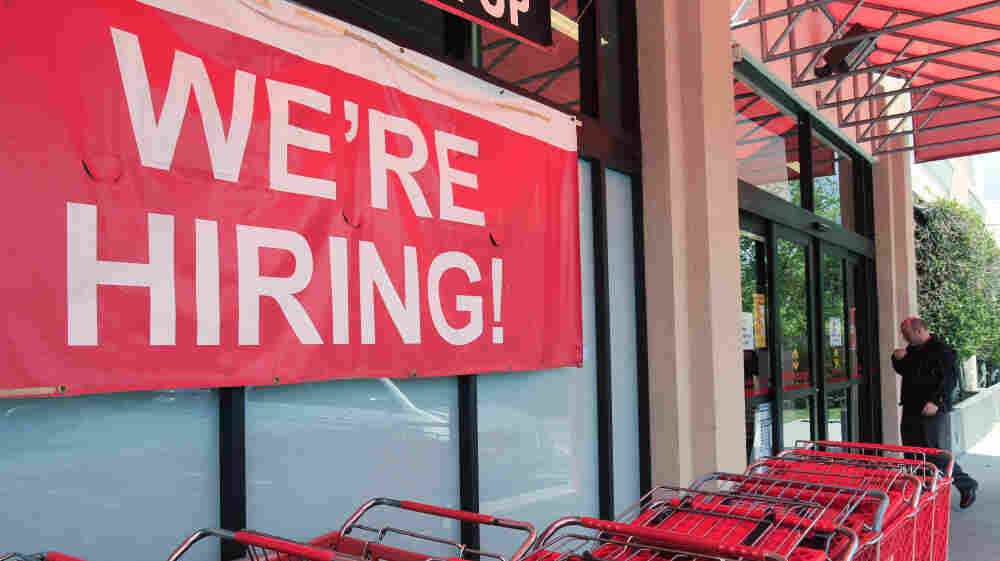 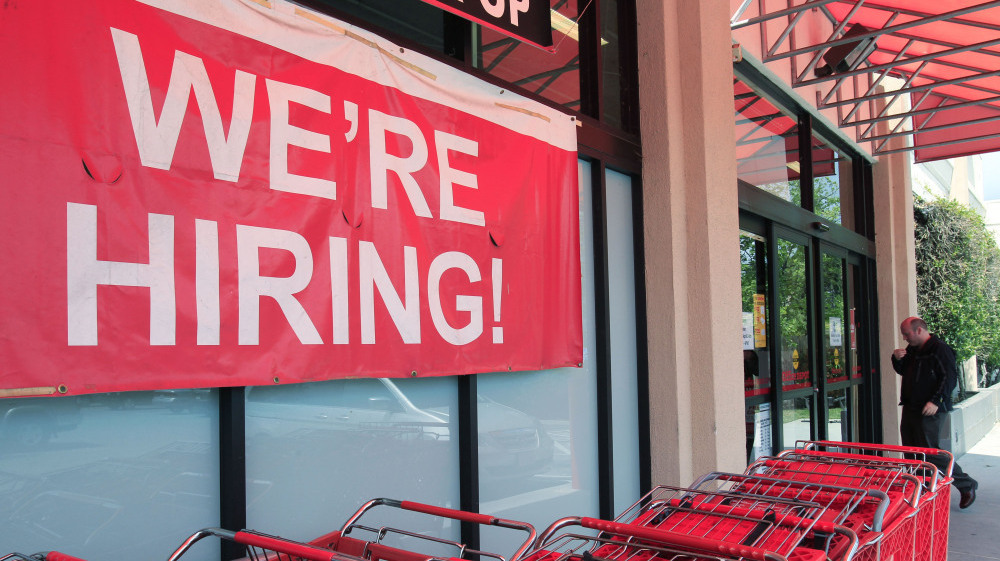 An Office Depot store in Mountain View, Calif., was looking to hire new employees last month. Retailers led the way in hiring for April, with 57,000 jobs.

The U.S. economic recovery continued to chug along as employers added jobs for a third straight month of strong growth.

The economy created a robust 244,000 jobs in April across a wide range of industries, according to a Labor Department report Friday. Gains in private sector hiring — 268,000 jobs — were especially encouraging, although the number was offset slightly by jobs lost in state and local governments.

The government also said job growth in previous months was even stronger than first reported, revising its February figures to 235,000 new jobs from 194,000 and March numbers to 221,000 from an initial report of 216,000.

Some analysts forecast that the strong growth will result in a lower unemployment rate in the near term, despite the fact that a separate report showing that the jobless rate edged up to 9 percent last month from 8.8 percent in March as more people began looking for work.

Retailers led the way in hiring, with 57,000 jobs. Factories and financial companies also showed gains, as did the education, health care and even construction sectors — one of the worst-hit by the long and painful recession, according to survey data released by the Bureau of Labor Statistics.

The figures signal an improvement in business confidence despite weak growth earlier this year and soaring gas prices that have weighed on consumers and threatened to put the brakes on the recovery. Most analysts agree the economy has strengthened enough to keep growing this year.

"This economy is growing between 3 percent and 4 percent, and that can raise living standards significantly over time," said Brian Wesbury, chief economist at First Trust in Wheaton, Ill. He called April's numbers "pretty darn strong."

"We've slowly but surely accelerated job growth, and I think these data today are pointing to more of the same in the months ahead," Wesbury said.

The chairman of the Council of Economic Advisers, Austan Goolsbee, said that while there needs to be faster growth to replace jobs lost in the downturn, the numbers are encouraging.

"Despite headwinds from high energy prices and disruptions from the disaster in Japan, the last three months of private job gains have been the strongest in five years," he said in a statement.

If the economy can continue to add jobs at a monthly pace of between 175,000 to 200,000, "the unemployment rate is going to be around 8.5 percent," said Alan Levenson, chief economist at T. Rowe Price in Baltimore.

For those Americans already employed, the job increases mean "a little bit higher job growth at the margin over time as the labor market tightens," Levenson said.

The uptick in the nation's unemployment rate marked the first increase since November. The government uses a separate survey of households to calculate the unemployment rate, and that showed employment dropped by 190,000.

"Over the long term, the two surveys get the same story about the economy, but over a one-month period, they often diverge by quite a lot," said Nigel Gault, chief U.S. economist with IHS Global Insight. "We've had three months in a row at about the 250,000 mark and the gains are pretty widespread."

Wesbury said he isn't concerned about the conflicting reports. "The survey that economists really look at is the payroll survey, and that is looking robust."

To calculate the unemployment rate, the government calls 60,000 households and asks people if they're working or looking for a job. This survey includes the self-employed, farm workers and domestic help — people not counted in the payroll survey.

By contrast, 140,000 businesses and government agencies are surveyed to determine the number of jobs added.

There had been concern that rising prices at the fuel pump could dampen the recovery, but the latest data partly dispelled that worry. Gas prices had risen for 44 straight days before holding steady Friday at a national average of roughly $3.99 a gallon.

All told there were 13.7 million Americans unemployed in April, still almost double since before the recession began in December 2007.

Including part-time workers who would rather be working full time, plus people who have given up looking altogether, the percentage of "underemployed" people rose to 15.9 percent in April.

One indicator that the new jobs created have traction is that fewer of them are temporary positions. Employment in temporary help services changed little in April following an increase of 34,000 in March.

"So it's not the case that we were adding plenty of jobs and that they were just temporary," Gault said. "These were permanent jobs that we added this month."

Unemployment has weighed on President Obama as the economy slowly rebounds. Wesbury said he thought the rate might be down around 7.5 percent by the 2012 elections, while Gault estimated that it might still be closer to 8 percent.