Accessibility links
Is The End Nigh? We'll Know Soon Enough May 21, 2011, according to some Christians, is Judgment Day, when the true believers will fly up to heaven while destruction befalls the rest. Disciples of this message are spreading the message of God's imminent wrath — and feverishly preparing for the Final Day.

Brian Haubert grabs some pamphlets and marches toward the flea market in Palmyra, N.J. Armed with a poster that trumpets Judgment Day on May 21, 2011, he braces for rejection. Announcing God's wrath is not always a popular message.

"I've been called a heretic," says Haubert, a 33-year-old actuary. "I've been told I read the wrong Bible. And then there's the occasional person who seems to be genuinely interested," he says.

Brown, who owns his own nutrition and wellness business, is soft-spoken and polished, not someone you'd imagine giving away doomsday tracts. But he says the clock is ticking.

"People need to know," Brown says, "and God commands us to share the Gospel about the end of the world. He says if we do not share the Gospel then their blood will be on our hands, whether they believe or not. God's been moving me to do this."

Haubert and Brown are two of a small — or not so small, who knows? — army of Christians sounding the alarm. They drive caravans and put up billboards, hand out tracts and try to convince friends and family that Judgment Day is upon us. Brown says this message is laced throughout the Bible, but only some can decode it. It will happen this way: 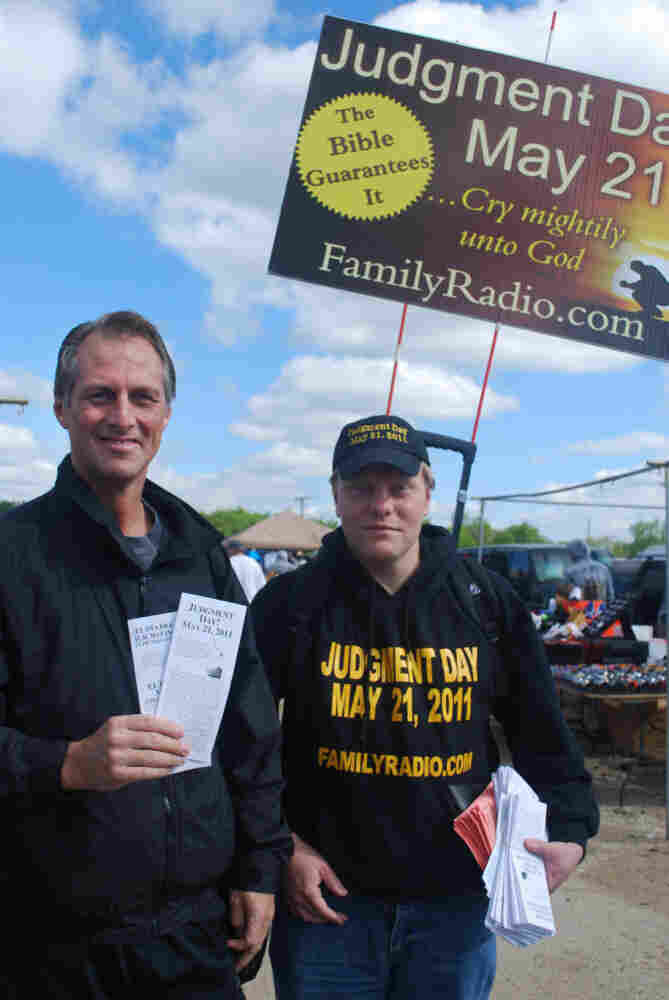 On May 21, "starting in the Pacific Rim at around the 6 p.m. local time hour, in each time zone, there will be a great earthquake, such as has never been in the history of the Earth," he says. The true Christian believers — he hopes he's one of them — will be "raptured": They'll fly upward to heaven. And for the rest?

"It's just the horror of horror stories," he says, "and on top of all that, there's no more salvation at that point. And then the Bible says it will be 153 days later that the entire universe and planet Earth will be destroyed forever."

Most Bible scholars note that even Jesus said he had no idea when Judgment Day would come. But May 21 believers like Haubert are unfazed.

"I've crunched the numbers, and it's going to happen," he says.

Haubert says the Bible contains coded "proofs" that reveal the timing. For example, he says, from the time of Noah's flood to May 21, 2011, is exactly 7,000 years. Revelations like this have changed his life.

"I no longer think about 401(k)s and retirement," he says. "I'm not stressed about losing my job, which a lot of other people are in this economy. I'm just a lot less stressed, and in a way I'm more carefree."

He's tried to warn his friends and family — they think he's crazy. And that saddens him.

"Oh, it's very hard," he says. "I worry about friends and family and loved ones. But I guess more recently, I'm just really looking forward to it."

Haubert is 33 and single. Brown is married with several young children, and none of them shares his beliefs. It's caused a rift with his wife — but he says that, too, was predicted in the Bible.

"God says, 'Do you love husband or wife over me? Do you love son or daughter over me?' There is a test. There is a trial here that the believers are going through. It's a fiery trial."

As May 21 nears, Brown says he feels as if he's on a "roller coaster." What if he is raptured but his family is left behind?

"I'm crying over my loved ones one minute; I'm elated the next minute," he says. "It's all over the place."

No one knows how many people believe Judgment Day is right around the corner. But it appears that many became believers in 2009 after turning on Family Radio, a Christian network worth more than $100 million. 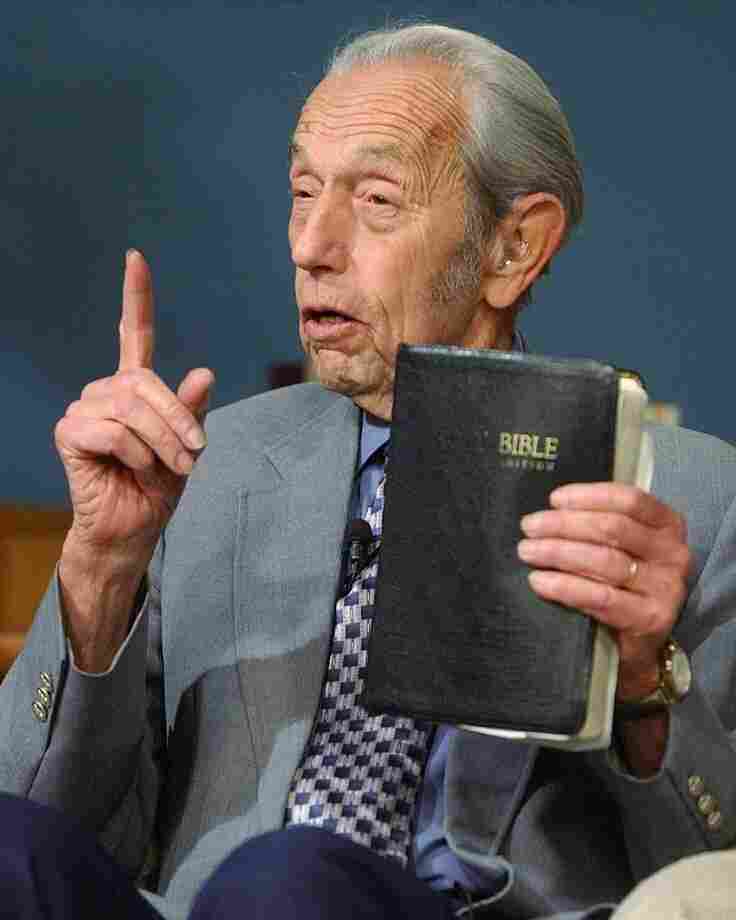 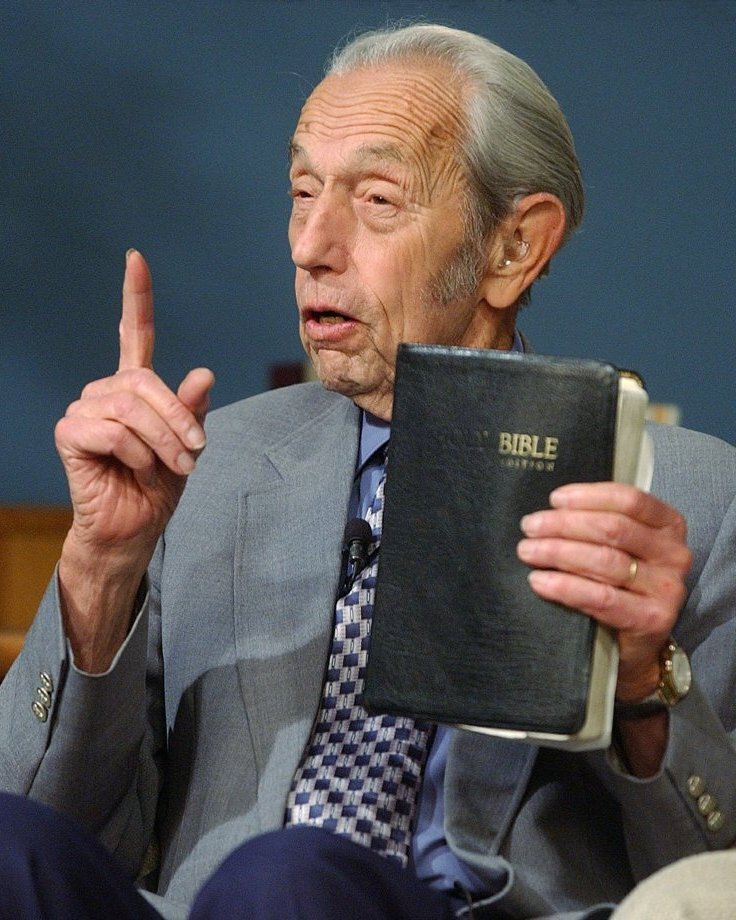 Harold Camping speaks, holding a Bible, during his live television broadcast in 2002.

Harold Camping, the network's 89-year-old founder, has been interpreting the Bible on the air for years. He says that everyone knows there would be a judgment day at some point.

"We just happen to be in that time in history," he said in an interview. "And whether we like it or not, we're here."

Camping's predictions have inspired other groups to rally behind the May 21 date. People have quit their jobs and left their families to get the message out.

"Knowing the date of the end of the world changes all your future plans," says 27-year-old Adrienne Martinez.

She thought she'd go to medical school, until she began tuning in to Family Radio. She and her husband, Joel, lived and worked in New York City. But a year ago, they decided they wanted to spend their remaining time on Earth with their infant daughter.

"My mentality was, why are we going to work for more money? It just seemed kind of greedy to me. And unnecessary," she says.

And so, her husband adds, "God just made it possible — he opened doors. He allowed us to quit our jobs, and we just moved, and here we are."

Now they are in Orlando, in a rented house, passing out tracts and reading the Bible. Their daughter is 2 years old, and their second child is due in June. Joel says they're spending the last of their savings. They don't see a need for one more dollar.

"You know, you think about retirement and stuff like that," he says. "What's the point of having some money just sitting there?"

"We budgeted everything so that, on May 21, we won't have anything left," Adrienne adds.

Nothing, except for the fervent hope that all of them will be raptured.

'There Is No Plan B'

Camping is not the first person to fix a date for the end of the world. There have been dozens of such prophets, and so far, they've all been wrong.

Camping himself has had to do some recalculation. He first predicted the end would come Sept. 6, 1994. He now explains that he had not completed his biblical research.

"For example, I at that time had not gone through the Book of Jeremiah," he explains, "which is a big book in the Bible that has a whole lot to say about the end of the world."

"Absolutely not," Camping says. "It is going to happen. There is no Plan B."

I've asked a dozen of Camping's followers the same question. Everyone said even entertaining the possibility that May 21 would come and go without event is an offense to God. They all hope they'll be raptured. Some worry about being left behind.

On the other hand, he will presumably have lots of company.