Accessibility links
Robert Johnson At 100, Still Dispelling Myths Despite hardy rumors that the bluesman sold his soul to the devil, Johnson's most important legacy is his mastery of recorded music. 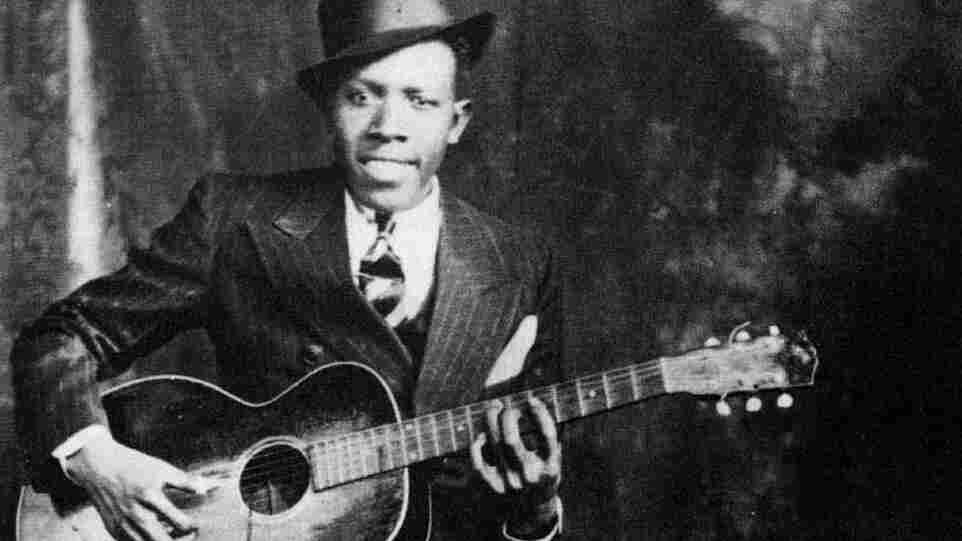 One of the two known photos of Robert Johnson. This portrait was taken by the Hooks Bros. Photography Company in Memphis, Tenn., circa 1935. Courtesy of the Delta Haze Corporation hide caption 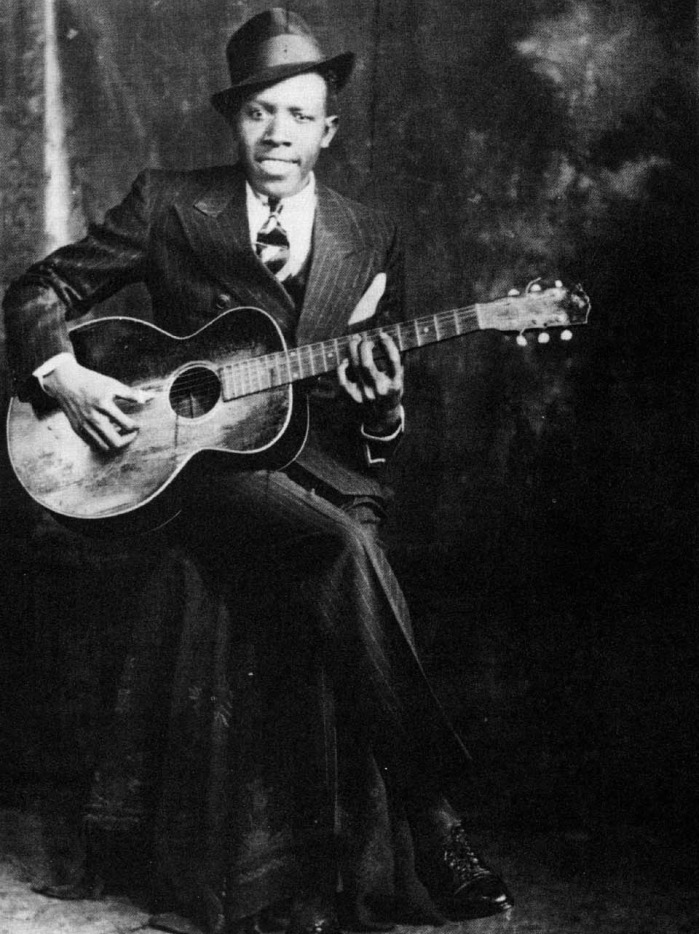 One of the two known photos of Robert Johnson. This portrait was taken by the Hooks Bros. Photography Company in Memphis, Tenn., circa 1935.

Courtesy of the Delta Haze Corporation

Sunday marks the 100th anniversary of the birth of Robert Johnson. Although he recorded just 29 songs, the bluesman had a huge influence on guitarists such as Eric Clapton and Keith Richards. Johnson is one of the most studied of all country blues musicians, and he's been the subject of many books, films and essays. But the mythology surrounding his life just won't go away.

If you know anything about Johnson, chances are it's the story that he sold his soul to the devil at the crossroads in exchange for his musical talent. That legend reached a mainstream audience with the 1986 movie Crossroads, starring Joe Seneca and Ralph Macchio.

But according to folklorist Barry Lee Pearson, it didn't happen.

"The popular mythology has him as a total loner," Pearson says, "and kind of lived this life in regret as a repayment for his alleged sin of making a contract with Old Scratch."

Pearson, a professor at the University of Maryland and the co-author of the book Robert Johnson: Lost and Found, says none of it is true. In the absence of any real biographical information, Pearson says early blues writers got a little carried away.

"Everybody was so anxious to make this devil story true that they've been working on finding little details that can corroborate it," he says.

Here is what we do know about Robert Johnson. He said he was born in Mississippi on May 8, 1911, and grew up on a plantation in the Delta. As a young man, he was more interested in music than farming: He'd hound the older blues musicians for a chance to play. In an interview included in the 1997 documentary Can't You Hear the Wind Howl, Son House recalls that the young Johnson would annoy audiences with his lousy guitar playing.

"Folks they come and say, 'Why don't you go out and make that boy put that thing down? He running us crazy,' " House said. "Finally he left. He run off from his mother and father, and went over in Arkansas some place or other."

When Johnson came back from Arkansas six months later, he'd mastered the guitar. That's where the rumors about his deal with the devil came from, but Johnson acknowledged studying with a human teacher while he was gone. After that, Johnson worked as a traveling musician, playing on street corners and in juke joints, mostly in Mississippi. And in 1936, he got a chance to record in Texas.

"Terraplane Blues" was a minor hit, and he was invited back for a second recording session. Johnson died a year later at age 27, under mysterious circumstances. Some think he was poisoned, although a note on the back of his death certificate says the cause was syphilis.

In any case, the timing was tragic. Legendary Columbia Records talent scout John Hammond wanted to book Johnson at Carnegie Hall for the landmark "Spirituals to Swing" concert in 1938. Hammond was also the driving force behind the first LP reissue of Johnson's music in 1961. At the time, Johnson was so obscure that Columbia didn't even have a picture of him to put on the cover. The LP was produced by Frank Driggs, who also wrote the liner notes.

"If you read the liner notes," Driggs says, "you see next to nothing. 'Cause I just created a thing out of whole cloth when I wrote the notes. Because there really was very little known about the guy."

Up Against The Wall

That LP, King of the Delta Blues Singers, introduced Johnson's music to a new generation of young, mainly white blues fans, including Eric Clapton, as the rock legend told NPR in 2004.

"It was on Columbia and it had, like, some pretty interesting sleeve notes on it about the fact that these were the only sides he had cut, and that they'd done it in a hotel room, and when he was auditioning for the sessions that he was so shy, he had to play facing into the corner of the room," Clapton says. "I mean, I immediately identified with that, because I was paralyzed with shyness as a kid."

But there may be another reason why Johnson recorded facing the wall. Elijah Wald is a musician and the author of the book Escaping the Delta: Robert Johnson and the Invention of the Blues. He says there were pre-war blues musicians who played guitar better than Johnson, as well as musicians who sang better. But Wald says that, unlike most of them, Johnson learned to play from listening to radio and records.

"Robert Johnson certainly was very conscious of what a hit record sounded like," Wald says. "If you listen to something like 'Come on in My Kitchen,' he's singing very quietly, and he actually has a moment when he says, 'Can't you hear the wind blowin'.' He whispers it and then plays this very quiet riff. That never would have worked on a street corner or a Mississippi juke joint, but it sounds great on records."

Sound is one of the main things that distinguishes Johnson's sides from other records of the time. By facing the wall, Wald says Johnson might have made his vocals sound better to a later generation accustomed to high fidelity. It doesn't hurt that the original masters of his recordings survived, too. But what really set Johnson apart from his peers was all of the mythology that grew up around him, especially the part about the devil. Many of Johnson's friends, including Johnny Shines in Can't You Hear the Wind Howl, dismissed it as false.

"No," Shimes says, "he never told me that lie. If he would've, I would've called him a liar right to his face. You have no control over your soul. How you gonna do anything with your soul?"

But the myth about Johnson persists, in part because it helps sell records. Steve Berkowitz is a producer at Sony Legacy, which is reissuing Johnson's music again, this time in a new centennial edition.

"That was always the heart and soul of the marketing plan," Berkowitz says. "We always knew the music was great. But a guy sells his soul to the devil at midnight down at the crossroads, comes back and plays the hell out of the guitar, and then he dies. I mean, it's a spectacular story."

And there wouldn't be any harm in that, Wald says, except that the legend tends to overshadow the real Robert Johnson.

"To just say that he went to the crossroads in the dead of night, first of all means we're not getting what happened. And second of all, it's kind of insulting," Wald says. "It's kind of implying that, unlike us who do this serious work to understand music, these old black blues guys just went and sold their soul to the devil."

If it were really that easy, Wald says, the devil would own the souls of every teenage boy and girl in America.