Accessibility links
Glenn Ligon Reframes History In The Art Of 'America' New York artist Glenn Ligon is perhaps best known for the text-based paintings he started making in the '80s. Now, his first midcareer retrospective takes a closer look at how the past has informed the work of this contemporary artist. 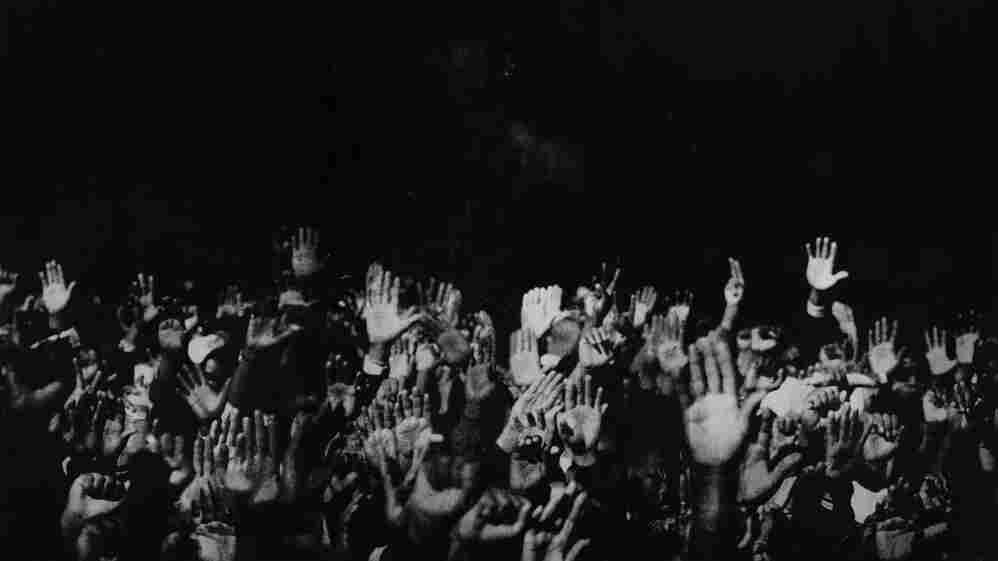 One of the first things you see when you walk into the Glenn Ligon: AMERICA show at New York's Whitney Museum of American Art is a sea of hands. 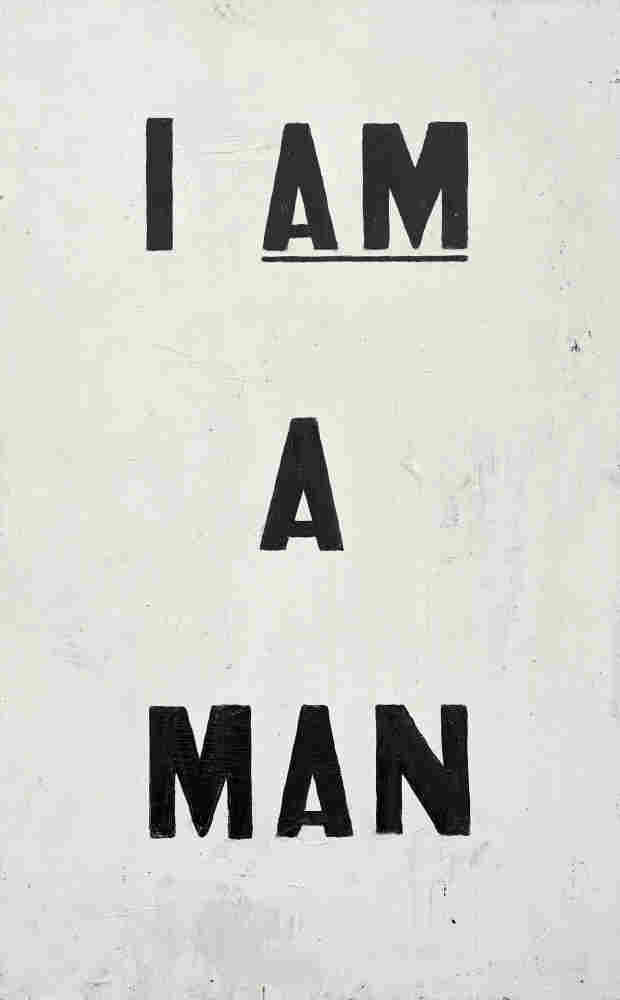 Untitled (I Am a Man) by Glenn Ligon, 1988 Ronald Amstutz/Courtesy of the artist hide caption 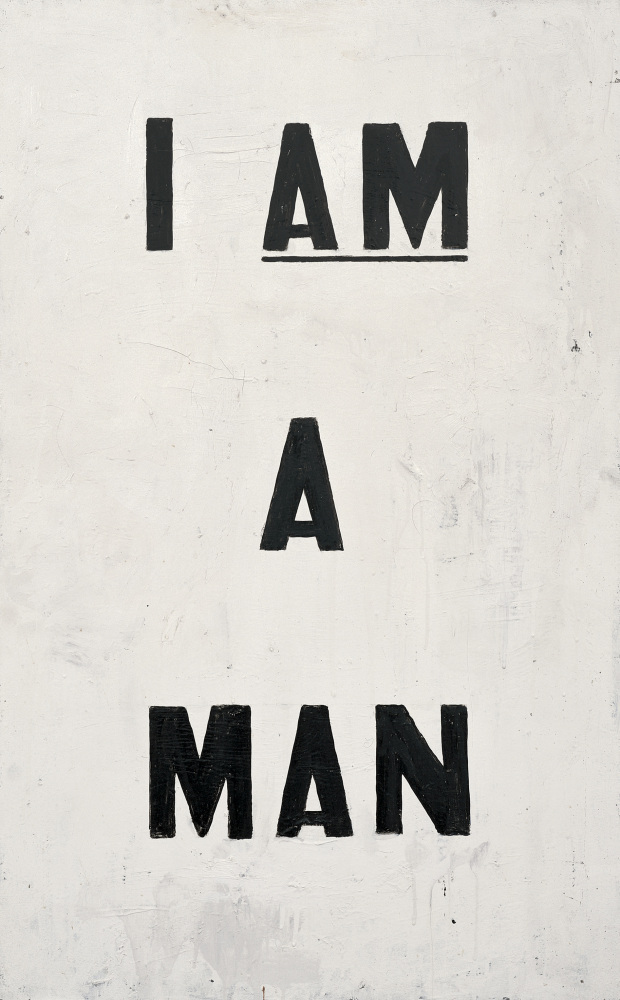 Ronald Amstutz/Courtesy of the artist

"It was derived from a newspaper photograph of the Million Man March," New York-based artist Glenn Ligon tells NPR's Liane Hansen. AMERICA is the first comprehensive midcareer retrospective devoted entirely to Ligon, who is African-American and best known for the text-based paintings he started making in the '80s.

Ligon's work is known for being both beautiful and politically provocative — and 1996's Hands is no exception.

"I took a very small image and blew it up to enormous scale," Ligon says. "What happens when you do that is that the information in the image starts to become indistinct. The image darkens."

Ligon says he thought of the way moments in history can seem so clear when they're happening, but inevitably fade over time — and he applied that dynamic to the Million Man March.

"So the sea of hands that you see in the image — which is a moment in the march where there is a pledge of the black men who had gathered there to the black family and to responsibility — becomes much more ambiguous," he says. "The context of the image becomes less clear."

Bringing 'The Notion Of Slavery Into The Present'

Continuing through the gallery, you come to a room scattered with wooden crates. Ligon says the installation To Disembark was inspired by the story of Henry "Box" Brown, a former slave in a Richmond, Va., tobacco factory who won his freedom by convincing a sympathetic white carpenter to make him a crate, close him into it and mail him to an anti-slavery society in Philadelphia. 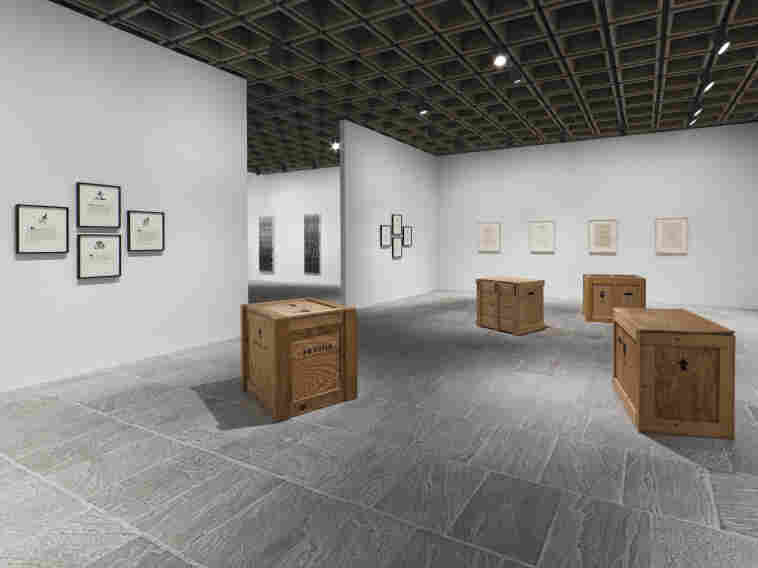 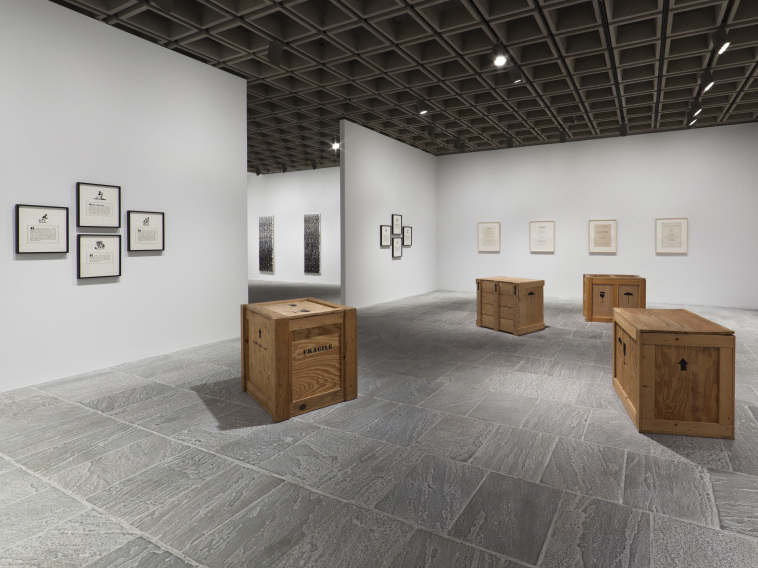 Ligon learned of the story through a mid-19th century lithograph of Brown emerging from the crate.

"I became fascinated with the idea of this box as the container for the body, but also the idea that if he had spoken, it would have been the thing that would have given him away," Ligon says.

So Ligon has filled his boxes with voices. And because the first thing Brown did when he was liberated from his crate was to sing, most of Ligon's boxes are also singing.

One crate plays a recording of Billie Holiday's "Strange Fruit," an anti-lynching song, while another plays a song by rapper KRS-One.

"We always talk about slavery as an event in the past, and I wanted to contemporize it someway, to bring it forward. So there's Billie Holiday singing, but then there's KRS-One singing 'Sound Of Da Police,' " Ligon says. "[KRS-One] makes this connection between police control and overseers. It was a way to sort of bring the notion of slavery into the present."

The Dichotomies Of 'America'

The last room in the show has three neon signs that each read "AMERICA." One flashes on and off, while another sits unplugged and yet another sits turned around. 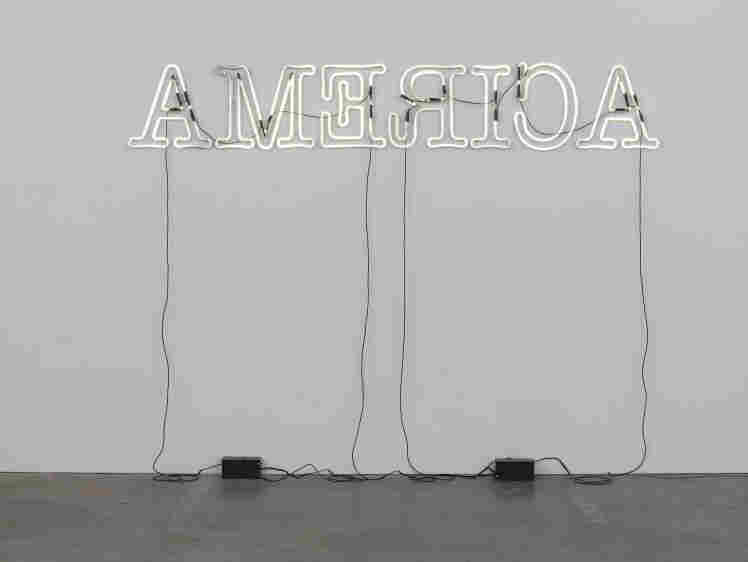 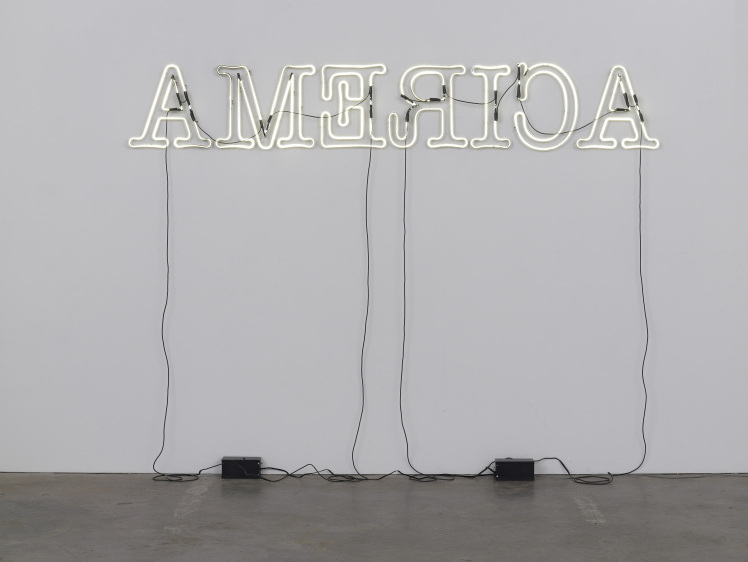 Ligons credits the inspiration for his neon Americas to, of all things, the opening line of Charles Dickens' A Tale of Two Cities­: "It was the best of times, it was the worst of times."

"After trying to think of a piece using the Dickens text, I realized, actually, Dickens is talking about a moment that society is in where everything is happening and nothing is happening; everything is booming and everyone is poor," Ligon says. "The dichotomies between rich and poor, progress and going backwards seemed to be where we were at in America. Those things going on at the same time seemed, to me, embodied in the word 'America.' "

So while one sign blinks erratically as though shortened out, another — called Ruckenfigur — is simply turned around.

"I realized that if you turn the letters around, it makes a very strange word. It's still the word 'America,' " Ligon says. "The word faces you and turns away from you at the same time." 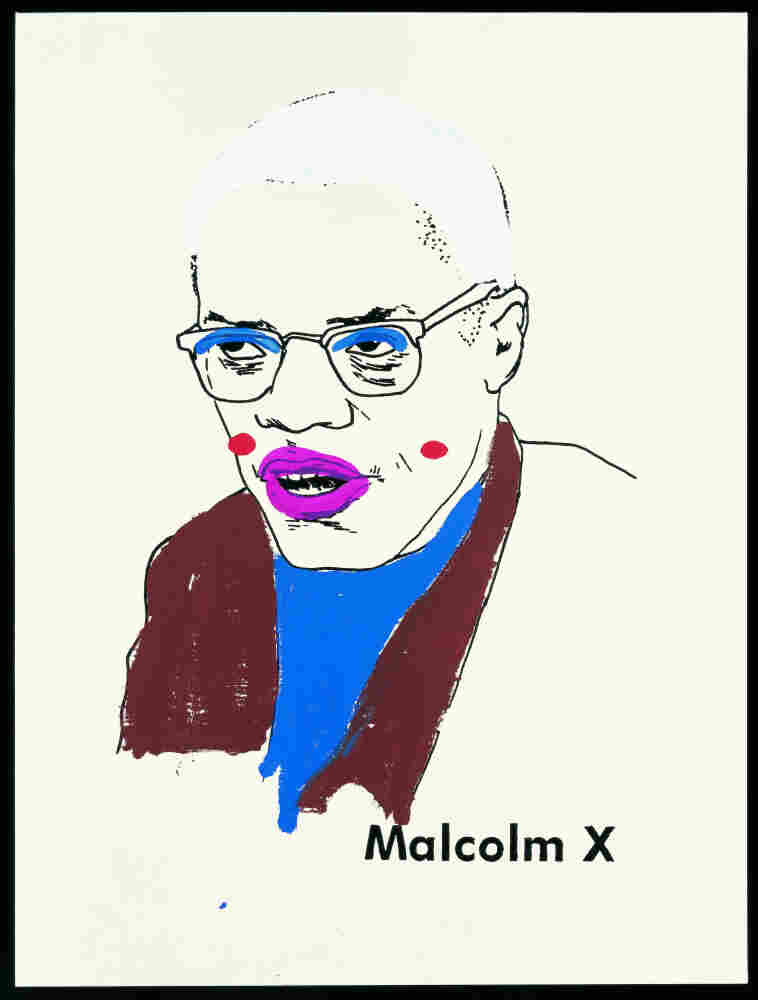 toggle caption
Courtesy of the artist and Regen Projects 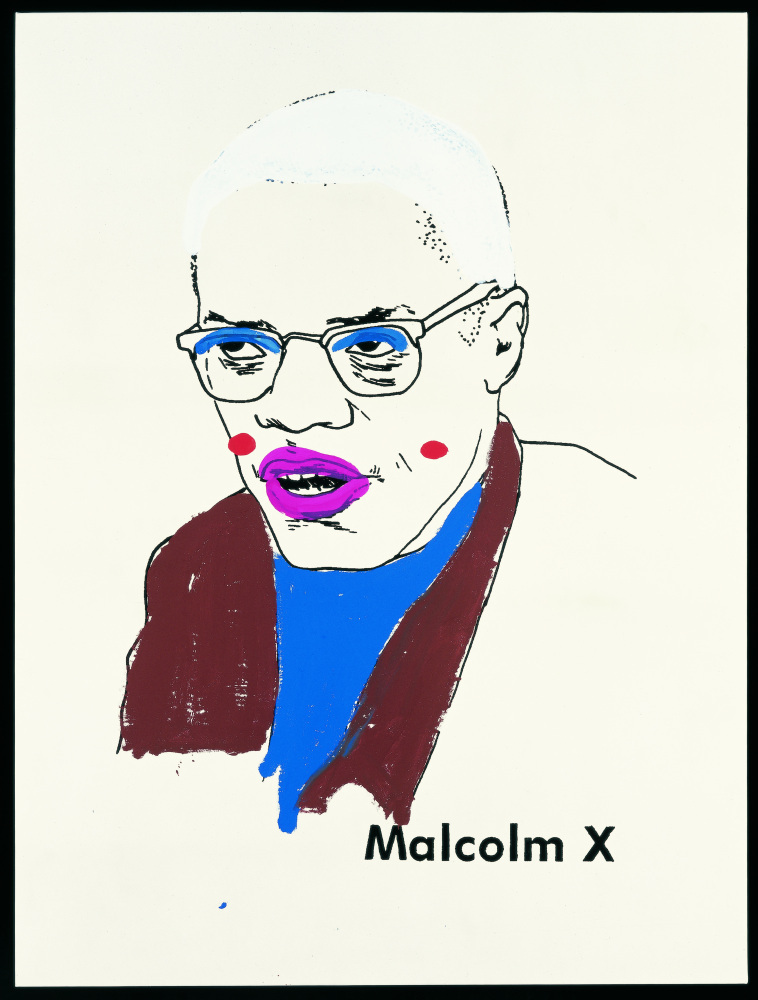 Courtesy of the artist and Regen Projects

One Can 'Be An Artist'

Glenn Ligon: AMERICA is showing at the Whitney until June 5. Some of its most notable visitors so far have been the local schoolchildren who come to witness the success of an artist who is not only black, but who grew up in New York.

Ligon says he took after-school art and pottery classes at — among other places — the Metropolitan Museum of Art. But as a child of the Bronx, his artistic rise was pretty unprecedented.

"My mother used to say that when I told her that I wanted to be an artist, her famous line was, 'The only artists I've ever heard of are dead,' " Ligon recalls. "It just wasn't in her experience ... I don't think she had a sense that one could be an artist, because there wasn't anyone in my family who had done that."

Still, Ligon says, he doesn't see himself as role model for aspiring artists — at least not exactly.

"I guess just by example, it would be harder for some parent to say, 'You can't be an artist,' " Ligon says, "because here I am."