Accessibility links
Tattoo Ink Stained By Safety Concerns Tattoos and permanent makeup are more popular than ever. Health officials are now looking at whether salons that do them are mixing their inks with harmful substances. The FDA also says it's starting to see an increase in consumer complaints about infections and other reactions to inks. 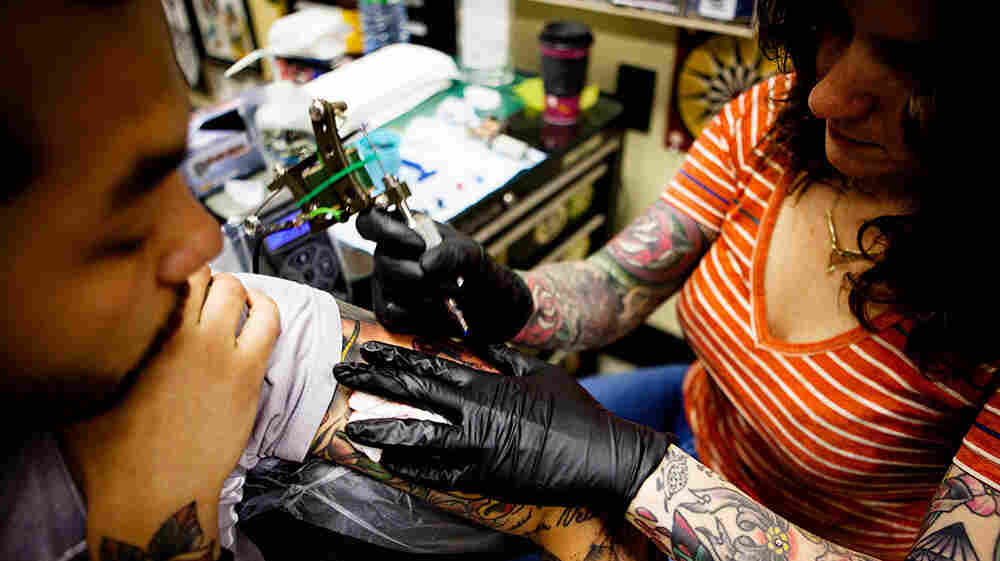 Nikki Lugo tattoos a client at Tattoo Paradise in Washington, D.C., in April. The salon's artists use mostly organic, vegetable-based inks because they feel they are a safer option. Maggie Starbard/NPR hide caption 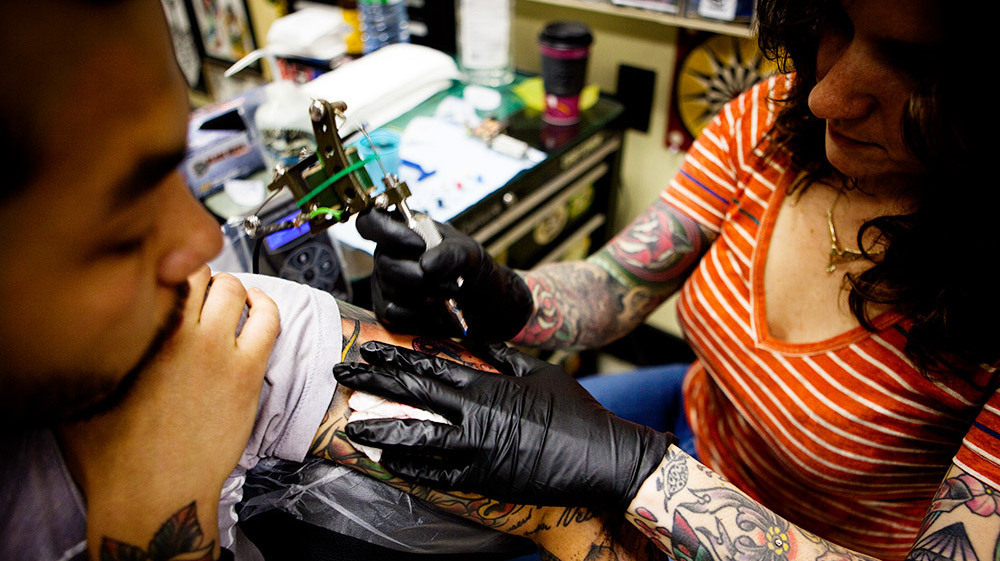 Nikki Lugo tattoos a client at Tattoo Paradise in Washington, D.C., in April. The salon's artists use mostly organic, vegetable-based inks because they feel they are a safer option.

Tattoo history reaches back thousands of years, to Egyptian mummies and even ancient ice men. Interest has waxed and waned over centuries, but now, it's fair to say, tattoo body art has reached a pinnacle. By some estimates, nearly half of all adults younger than 40 sport at least one tattoo.

But federal health officials are concerned that not all inks are safe. And they worry that some tattoo salons are mixing their inks with other, unsafe products.

Gone are the days of the simple heart with "Mom" or a girlfriend's name inscribed. Today's tattoos are typically complex, extraordinarily detailed pieces of art.

"Part of Zulu's philosophy is that tattoo art is a form of fine art, just on another canvas [the skin]," says Khani Zulu, who owns Zulu Tattoo in Los Angeles with her tattoo artist husband, known simply as Zulu. 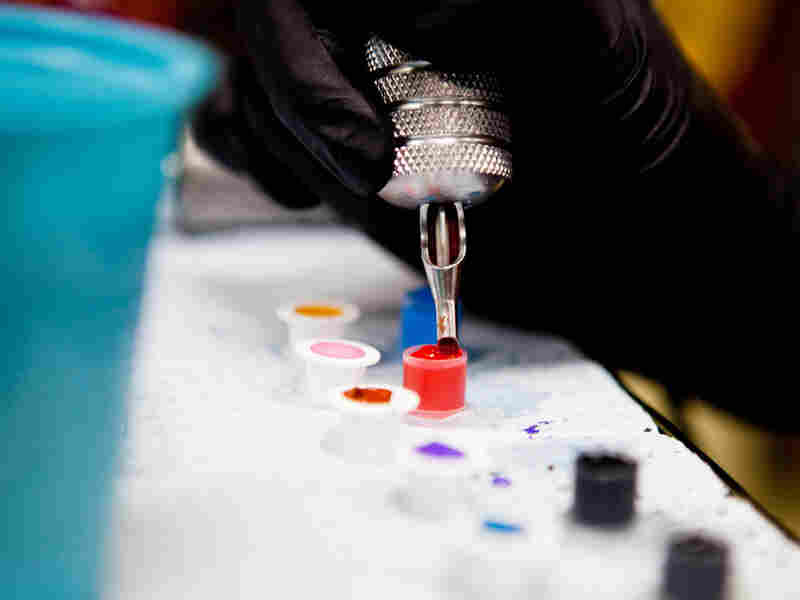 A tattoo artist prepares inks before working on a client. The FDA says it wants to learn more about what goes into tattoo inks. Maggie Starbard/NPR hide caption 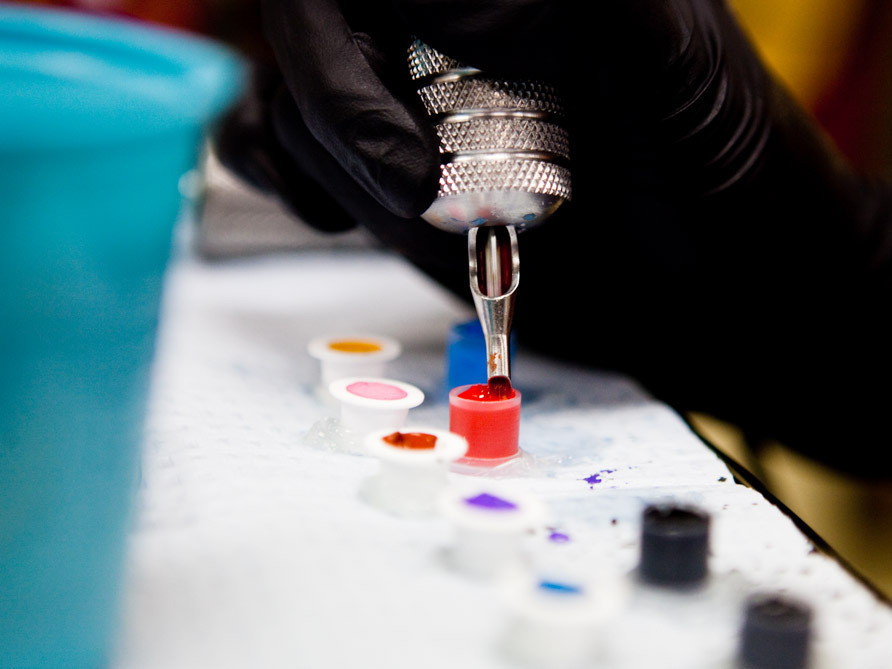 A tattoo artist prepares inks before working on a client. The FDA says it wants to learn more about what goes into tattoo inks.

Zulu has gotten a lot of publicity for tattooing celebrities and is becoming renown as one of the oldest custom tattoo shops. There are no catalog designs to choose from here.

"You come in with an idea, and we design your tattoo specifically for you," says Khani Zulu. "It's unique, and we won't tattoo the same design on anyone else."

Design, of course, is only part of the artistry. Color is the other. And, there's a dramatic rainbow of choices with enticing names like sky blue, mint green, graffiti green, avocado, Georgia peach and dusty rose.

Zulu is confident about the safety of her inks. She's aware that some inks contain potentially harmful metals and plastics. So, when she chose a brand, Zulu says, she chose what seemed the most natural: vegetable-based organic pigments.

"It's pretty much as safe as you can get," she says.

'Nobody Knows For Sure What's Really In Them'

But health experts worry that not all inks are safe. They are especially concerned about trendier tattoo techniques, says cosmetic dermatologist Dr. Tina Alster.

"There are some chemicals that have been shown to be injected along with the tattoo inks to make them brighter or even psychedelic," says Alster, who is also a laser surgeon and director of the Washington Institute of Dermatological Laser Surgery. "There are some that actually glow in black light."

There are some chemicals that have been shown to be injected along with the tattoo inks to make them brighter or even psychedelic. There are some that actually glow in black light.

Tina Alster, a cosmetic dermatologist and laser surgeon at the Washington Institute of Dermatological Laser Surgery

Glow-in-the-dark tattoos are quite popular with the night club set, Alster says. But the problem with inks today is that "nobody knows for sure what's really in them."

The Food and Drug Administration has the authority to regulate tattoo ink. But until recently, it hadn't, citing more pressing public health problems and a lack of consumer complaints. FDA chemist Dr. Bhakti Petigara Harp says that recently, the agency has started to see an increase in consumer complaints.

FDA's own investigation into the chemical composition of inks and their long-term safety has turned up some other concerns. For example, when tattoos fade, as they do over time, what happens to the ink? Where does it go in the body? Researchers are exploring that question, and they think the body rids itself of the inks as it does certain bacteria and other foreign matter.

But some inks — perhaps the reds, oranges, yellows and even whites — may be problematic. The skin cells containing the ink can be killed by sunlight and ink-breakdown products may disperse through the body, scientists say. Research has already found that certain types of pigment migrate from the tattoo site to the body's lymph nodes. This could potentially damage the lymphatic system, which filters out disease-causing organisms.

An FDA webinar in March opened the discussion about the safety of tattoo ink to the public and the industry and issued cautions to consumers considering a tattoo.

Questions Around Permanent Makeup, Too

Alster says the mystery surrounding ingredients in tattoos extends to the inks used in permanent makeup — such as tattooed eyeliner, lip liner and eyebrows.

"They often mix a lot of inks, and we don't know what the ingredients are," Alster says. "There are some, like cadmium, that are carcinogenic. Others cause granulomas, which is an allergic reaction in the skin."

Permanent Makeup May Cause Permanent Problems

"You can have a lip liner tattoo that traces a nice full lip as you are younger," but as you get older and the lip thins, the liner can end up outside the border of the lip, says Alster, making for a very odd appearance.

And removing permanent makeup, just like removing other tattoos, is more costly and complicated than getting it in the first place. Tattoos are typically removed using a high-speed laser that vaporizes the ink particles.

"So, when you hit them with a laser, they will actually get darker rather than lighter," Alster says. "That's because there are small amounts of iron or titanium oxide in those tattoo inks, and they form this irreversible pigment in the skin."