Accessibility links
Army Corps Makes Tough Calls With Floods The decision last week by the U.S. Army Corps of Engineers to blast a levee in southeast Missouri has drawn criticism. When it comes to floods, actions by the Corps bring controversy. 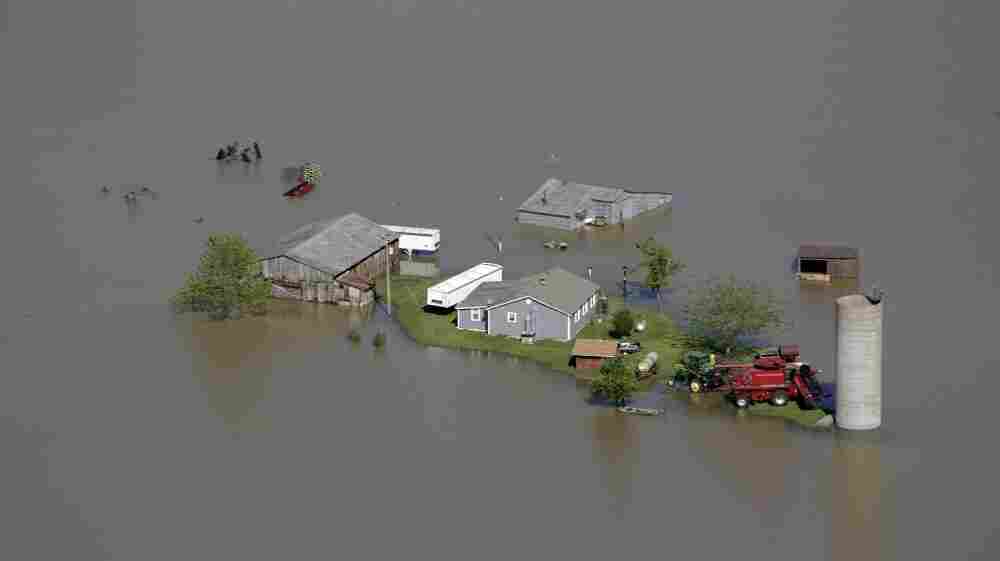 When the Army Corps of Engineers blasted part of a levee holding back the Mississippi River last week, floodwater poured over Missouri farmland and surrounded this farm near New Madrid, Mo. Jeff Roberson/AP hide caption 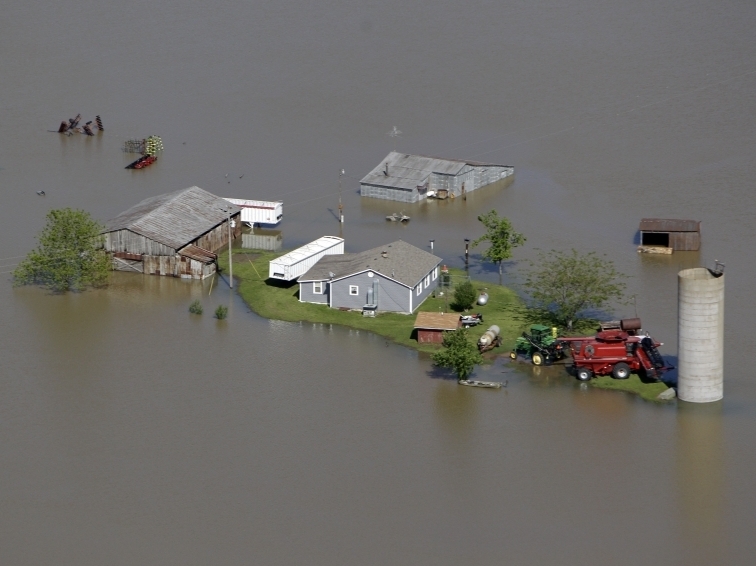 When the Army Corps of Engineers blasted part of a levee holding back the Mississippi River last week, floodwater poured over Missouri farmland and surrounded this farm near New Madrid, Mo.

To handle all of the water flowing down the Mississippi River, the Army Corps of Engineers is opening the floodgates on a spillway north of New Orleans.

Opening the Bonnet Carre spillway diverts some of the floodwaters into Lake Pontchartrain and from there to the Gulf of Mexico. But nearly every flood control action taken by the Corps draws some controversy.

In almost every decision to divert floodwaters, there are winners and losers. With the opening of the Bonnet Carre spillway, John Lopez of the Lake Pontchartrain Basin Foundation says the loser will be the lake.

Within a few days, the brackish waters of the lake will be flushed out and replaced by nutrient-rich freshwater from the Mississippi. That will likely drive out the crabs and fish that normally call the lake home, and also promote algae blooms. 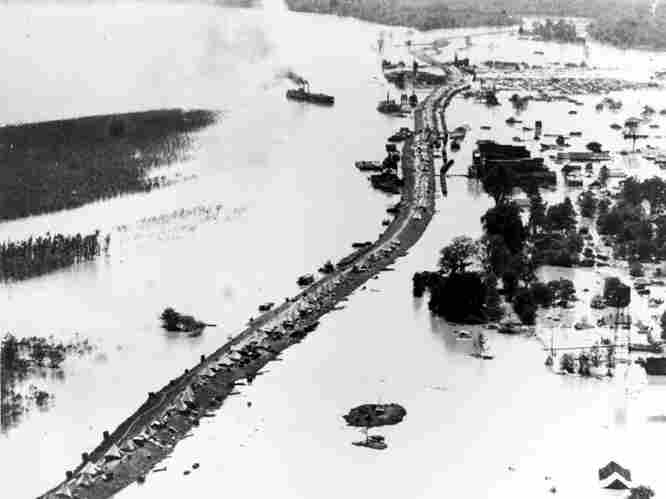 A list of some of the worst episodes since 1900.

"The blooms can lead to low oxygen — anoxia or hypoxia in the lake," Lopez says. "There have been times when there has been some relatively minor fish kills."

Because of the danger and potential damage posed by the rising waters of the Mississippi, Lopez says his group doesn't oppose opening the spillway. It's a system, controlled by floodgates, that has been opened sporadically over the years.

Not A Decision Made Lightly

It's a much different situation from the floodway activation last week in southern Missouri. Over the course of four days, the Army Corps of Engineers blasted three openings in levees on the Birds Point floodway. It helped protect communities downstream and almost immediately reduced the level of the river by a couple of feet. But, in doing so, it flooded some 130,000 acres of farmland and forced the evacuation of 100 homes.

Army Corps of Engineers Maj. Gen. Michael Walsh said deciding to activate the floodway was not something he did lightly. At a news conference, he said, "I've known many of the people who have lived and worked in the floodway for the past three years. I consider them friends, and certainly making the decision to put this in operation was a difficult decision."

One reason farmland near the Mississippi is so productive is precisely because it has received regular flooding from the river. Activating the floodway was part of a plan that has been part of the Mississippi's flood control design for more than 80 years.

But although it has long been in place, it has rarely been used. The last time was 74 years ago. At that time — as at this time — the decision was met with protests and lawsuits.

Charles Camillo, a historian with the Mississippi River Commission, has studied transcripts of the congressional hearings after the historic 1927 Mississippi flood that led to the creation of the current flood control plan. Even then, there was opposition.

Camillo says, "It was best characterized by Congressman Dewey Short. He said, 'The people of Southeast Missouri do not want to become the dumping grounds to protect Cairo, Ill., as much as we love Cairo, Ill.' "

Craig Colten, a professor of geography at Louisiana State University, says that for the Army Corps of Engineers, controversy comes with the territory.

"Whenever you build structures to handle floods, you're walking that fine line between offering protection and failing to provide protection," Colten says. The Corps, he says, "is going to be a lightning rod for any either failures, or even successes, that on a rare occasion cause damage."

For the Army Corps of Engineers, any criticism it faces over how it's handling flooding on the Mississippi pales in comparison with the public scourging it received following Hurricane Katrina.

The Corps was targeted by many as the responsible party for the failure of New Orleans' levees — sharing the blame with local governments and contractors who performed substandard work.

In the nearly six years since, the Corps has done much to upgrade flood control — and its image — in New Orleans. Among the changes he sees in the Corps post-Katrina, Colten says, it is careful now to downplay the level of protection provided by its flood control efforts.

"They're trying not to present their levees as infallible and as providing 100 percent protection," he says. "They perhaps exhibit a little less hubris than they did in the past."

As the Mississippi flooding moves downriver, the Army Corps of Engineers says some areas may even exceed levels seen in the historic 1927 flood. It's a reminder and a warning that even with the best flood control measures, living next to the river means sometimes getting wet.