Accessibility links
Memphis Flooding Peaks; Downstream Areas On Alert As the Mississippi reached its high point in Memphis, Tenn., and attention turns to a time-consuming clean up, farmers downriver built homemade levees to protect their crops and engineers diverted water into a lake to ease the pressure on New Orleans levees. 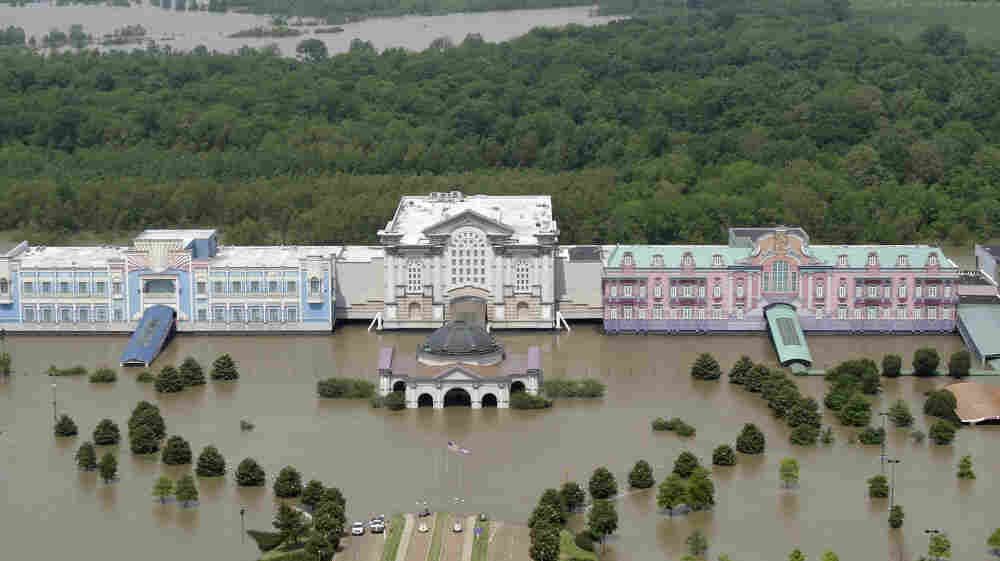 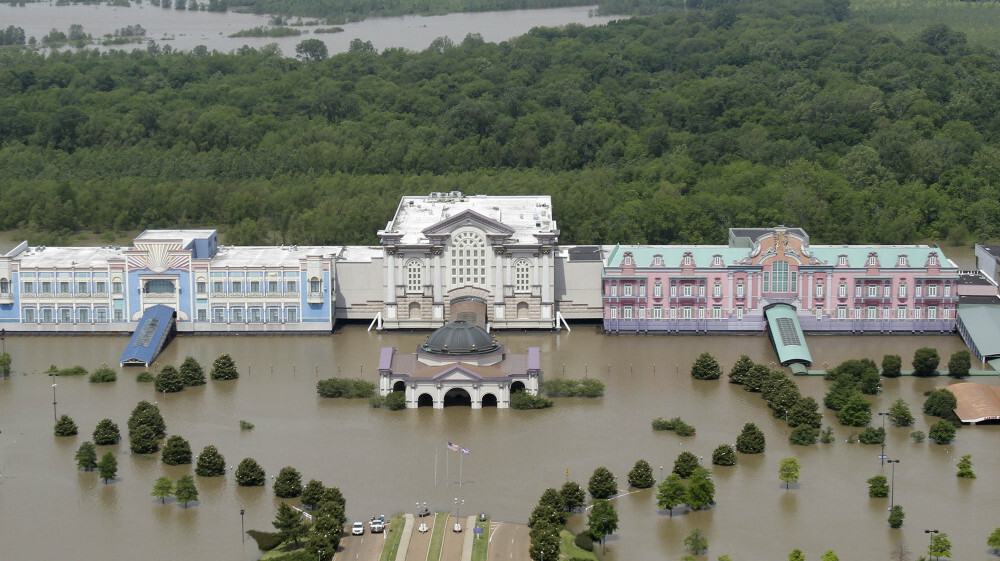 Just south of Memphis, water from the swollen Mississippi River flooded a casino in Tunica, Miss.

The Mississippi River crested in Memphis, Tenn., just short of 48 feet Tuesday after threatening to bring historic flooding to the area.

National Weather Service meteorologist Bill Borghoff said the river reached 47.85 feet — about a foot shy of the record — at 2 a.m. Tuesday and was expected to stay very close to that level for the next 24 to 36 hours.

The soaking in Memphis was isolated to low-lying neighborhoods, and forced hundreds of people from their homes, but no new serious flooding was expected. Officials trusted that the levees would hold and protect the city's world-famous musical landmarks, from Graceland to Beale Street.

"It shouldn't get any worse than it currently is," said Elizabeth Burks of the Army Corps of Engineers, standing on a levee on the river's west bank.

To the south, residents in the Mississippi Delta prepared for the worst.

Scott Haynes, 46, estimated he would spend more than $80,000 on contractors to build levees around his house and grain silos, which hold 200,000 bushels of rice that he can't get out before the water comes. Heavy equipment has been mowing down his wheat fields to get to the dirt that is being used to build the levees, and he expected nearly all of his farmland to flood.

"That wheat is going to be gone anyway," said Haynes, who lives in Carter, Miss., about 35 miles east of the Mississippi River. "We don't know if we're doing the right thing or not, but we can't not do it."

He knows time is not on his side. "I've got to get back on that dozer," he said, before walking away.

Nearby, Ed Jordan pointed to a high-water mark about 7 feet high in the family's old general store left by the deadly flood of 1927. Floods have taken crops since then, but the Mississippi River hasn't swamped their homes in generations.

He was afraid it will happen this time.

"We have 400 acres of beautiful wheat that's almost ready for harvest. We have about a thousand acres of corn that's chest high and just waiting on a combine [to harvest it]. That's going to be gone," Jordan said. "I don't know what is going to happen to our houses."

Just down the road, relatives helped Jordan's 87-year-old aunt, Katherine Jordan, pack up a house. They loaded furniture on a cotton trailer and prepared to head to higher ground. A tractor outside scraped dirt from a wheat field to form a levee.

Jordan said he leased a house on higher ground and will live there until the water goes down. His aunt is going to live with her sister in nearby Yazoo City, where the Delta flatlands meet the central Mississippi hills.

Similar scenes played out across the Mississippi Delta, the flatlands that stretch about 200 miles from Memphis to Vicksburg, Miss. Shelters were open and farmers were already applying for federal aid.

Meanwhile, Memphis declared that the city was open for business.

"Contrary to what is being perceived at the national and international level, we are not closed," said Mayor AC Wharton.

An NBA playoff game Monday night featuring the Memphis Grizzlies at the FedEx Forum downtown was not affected, and a barbecue contest this weekend was moved to higher ground.

"The country thinks we're in lifeboats and we are underwater. For visitors, it's business as usual," said Kevin Kane, president and chief executive of the Memphis Convention and Visitors Bureau.

Other popular sites were also spared, including Sun Studio, where Elvis Presley made some of the recordings that helped him become king of rock 'n' roll, and Stax Records, which launched the careers of Otis Redding and the Staple Singers.

Graceland, Presley's former estate several miles south of downtown, was in no danger, either.

"I want to say this: Graceland is safe. And we would charge hell with a water pistol to keep it that way, and I'd be willing to lead the charge," said Bob Nations Jr., director of the Shelby County Emergency Management Agency.

Forecasters said it appeared the river was starting to level out and could crest by Tuesday morning at or near 48 feet, just shy of the all-time high of 48.7 feet.

At Sun Studio, where Johnny Cash, Jerry Lee Lewis and a multitude of others also recorded, tourists from around the world continued to stream off buses and pose beneath the giant guitar hanging outside.

"We didn't really know what to expect," said Andy Reilly, a 32-year-old musician from Dublin, Ireland, who was in town to perform. "We're delighted it's not as bad as we thought it was going to be."

Because of heavy rain over the past few weeks and snowmelt along the upper reaches of the Mississippi, the river has broken high-water records upstream and inundated low-lying towns and farmland. The water on the Mississippi is so high that the rivers and creeks that feed into it are backed up, and that has accounted for some of the worst of the flooding so far.

Because of the levees and other defenses built since the cataclysmic Great Flood of 1927 that killed hundreds of people, engineers say it is unlikely any major metropolitan areas will be inundated as the high water pushes downstream over the next week or so. Nonetheless, they are cautious because of the risk of levee failures, as shown during Hurricane Katrina in 2005.

In Louisiana, the Corps partially opened a spillway that diverts the Mississippi into a lake to ease pressure on the levees in greater New Orleans. As workers used cranes to remove some of the Bonnet Carre spillway's wooden barriers, hundreds of people watched from the riverbank.

The spillway, which the Corps built about 30 miles upriver from New Orleans in response to the flood of 1927, was last opened in 2008. Monday marked the 10th time it has been opened since the structure was completed in 1931.

Rufus Harris Jr., 87, said his family moved to New Orleans in 1927 only months after the disaster. He was too young to remember those days, but the stories he heard gave him respect for the river.

"People have a right to be concerned in this area because there's always a possibility of a levee having a defective spot," Harris said as he watched water rush out.

The Corps has also asked for permission to open a spillway north of Baton Rouge for the first time since 1973. Officials warned residents that even if it is opened, they can expect water 5 to 25 feet deep over parts of seven parishes. Some of Louisiana's most valuable farmland is expected to be inundated.

At the Louisiana State Penitentiary in Angola, home of the state's death row, officials started moving prisoners with medical problems to another prison as backwaters began to rise. The prisoners were moved in buses and vans under police escort.

The prison holds more than 5,000 inmates and is bordered on three sides by the Mississippi. The prison has not flooded since 1927, though prisoners have been evacuated from time to time when high water threatened, most recently in 1997.

NPR's David Schaper reported from Memphis for this story, which contains material from The Associated Press.