Accessibility links
New Republic: The Long Shot — Why Newt Could Win Many have called the contenders for the GOP presidential nominee "uninspiring," but Walter Shapiro of The New Republic argues that the field provides a good set up for one candidate in particular: Newt Gingrich. Despite some blemishes on his record, Gingrich could just steal a win.

New Republic: The Long Shot — Why Newt Could Win

New Republic: The Long Shot — Why Newt Could Win 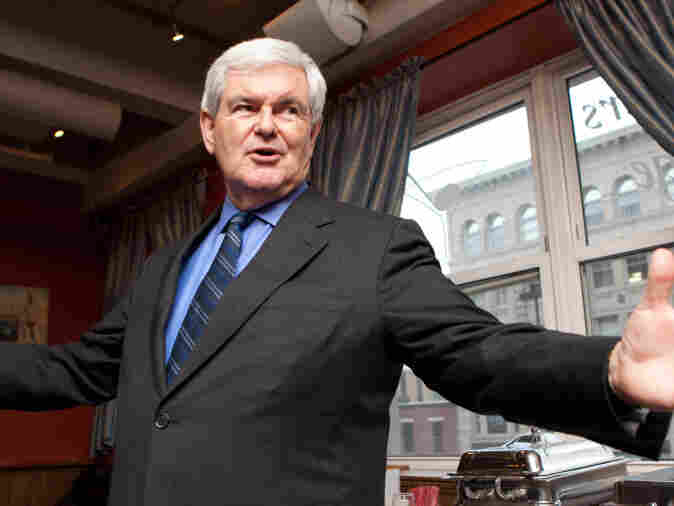 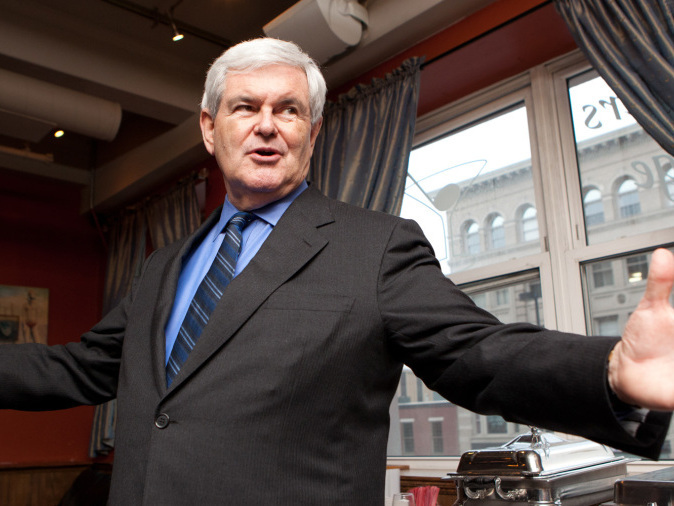 Walter Shapiro is a special correspondent for The New Republic.

The Republican presidential race is fast resembling World War II baseball, when 4-Fs roamed the outfield, the ball lost its bounce because of the rubber shortage, and sportswriters found it hard to imagine that any team could win the World Series. But as heretical as it seems today, someone is going to be bathed in lights and drenched in confetti as the victorious GOP nominee at the Tampa convention.

All this brings us to Newt Gingrich, who is going to declare his candidacy Wednesday in cliched 21st century disembodied fashion — with announcements on Twitter and Facebook and a follow-up interview with Sean Hannity on Fox News. Yet, for all of the missteps leading up to this moment — including a mangled rollout of his exploratory campaign in March — Gingrich remains a curiously undervalued stock in the Republican presidential portfolio.

Newt undervalued? I can hear the snickers and the stunned gasps. Yes, Gingrich has more defects than a 1971 Chevy Vega and his liabilities may seem more daunting than the final Lehman Brothers balance sheet. The affairs, the three marriages, and the ethics charges that helped end his congressional career after the 1998 elections are not the sort of things a candidate boasts about on his Facebook page. Moreover, the 67-year-old former House speaker will be a senior citizen among the GOP contenders (granted, Ron Paul is 75) and Jimmy Carter was president when Gingrich was first elected to Congress in 1978.

All this helps explain why Gingrich — despite sometimes polling in double digits during trial heats among GOP contenders — has become a plaything of the conventional wisdom. Intrade, an online stock market for political predictions that is a good gauge of elite opinion, gives Gingrich a paltry 3.6 percent chance of winning the Republican nomination. That puts Newt behind Donald Trump (4.8 percent) and Michele Bachmann (4.2 percent) and (yikes!) just ahead of Ron Paul (2.8 percent).

In politics, new and shiny objects have the same allure that they do in nursery school. This week, Jon Huntsman (running at 11.1 percent on Intrade) is being portrayed as the most dynamic returnee from China since Marco Polo. Even though Huntsman, a former Utah governor, probably has better name recognition in Beijing than in Bettendorf, Iowa, he is lionized as a top-tier presidential possibility. Somehow it does not matter that in a national CNN/Opinion Research Corporation Poll released last week, 64 percent of Republicans had never heard of Huntsman.

What Gingrich has going for him is that presidential elections are about something beyond gauzy biographical ads and rehearsed debate one-liners. "We're in the personality phase of the campaign," says Republican pollster David Winston, who worked for Gingrich when he was House speaker. "But eventually it's going to move from personality to policy. GOP voters are going to ask, 'What are your solutions to fix the nation's problems?' And that is the moment that plays to Newt's greatest strength."

Almost nine months before the scheduled date for the Iowa caucuses, it is difficult to predict what issues will frame the GOP conversation. Hint: Real issues involve more than predictably denouncing ObamaCare and demagoging the deficit. Not only can the external political environment change in an instant (yes, this is the obligatory Osama bin Laden reference), but odd issues can galvanize primary voters. At this point in 1995, no one imagined that the 1996 GOP campaign dialogue would be dominated by Steve Forbes's advocacy of the flat tax.

Running for president involves more than running your resume up a flagpole and seeing who salutes. That future-oriented part of the conversation is what baffled candidates like Rudy Giuliani and Wesley Clark in 2004 for the Democrats. But from the days that he was over-enthusiastically touting what-comes-next thinkers like Alvin Toffler, Newt Gingrich has always been about the future. The former House speaker's ideas may not always parse and sometimes have an amnesiac's lack of consistency, but more than any Republican running (especially cautious candidates like Mitt Romney and Tim Pawlenty) Gingrich is likely to ride the intellectual wave of the primaries.

Gingrich also boasts unusual financial and institutional advantages that his rivals lack. As The Wall Street Journal detailed in a front-page article Monday, Gingrich has constructed a daisy chain of think tanks and advocacy organizations to promote his pet causes and his political future. One number stands out in the article: the 1.7 million email addresses that Newt-created organizations have collected.

Almost all the GOP contenders have to airbrush away an embarrassing blemish on their ideological records. Whether it is raising taxes as governor (Mike Huckabee), pioneering Obama's health plan (guess who?), once supporting cap-and-trade energy legislation (Pawlenty and Huntsman), or fueling the deficit as OMB director (Mitch Daniels), the entire Republican presidential all-star team has something to answer for.

Gingrich, in the run-up to his presidential candidacy, has had his low-road moments such as his inflammatory comments about the proposed mosque in a former Burlington Coat Factory near Ground Zero. But Gingrich also does not have to prove his right-from-the-start bona fides at every moment in the campaign. Back in the days when Mitt Romney was running against Teddy Kennedy as a Massachusetts moderate Republican, Gingrich not only personified conservatism but was the field marshal responsible for its greatest congressional victory.

2012 may not be Newt Gingrich's year — and please understand that I am only calling him a plausible possibility in an uninspiring GOP field. But remember that the last time the political railbirds sold Gingrich short, he gave the Republicans their first House majority in 40 years.