Accessibility links
Making Parenthood A Reality Through IVF Grants Infertility treatment is prohibitively expensive for many. Some couples take out a second mortgage, cash in their 401(k) or run up credit cards to pay for it. In Virginia, one nonprofit organization is providing financial help in the belief that becoming a parent should not depend on your paycheck. 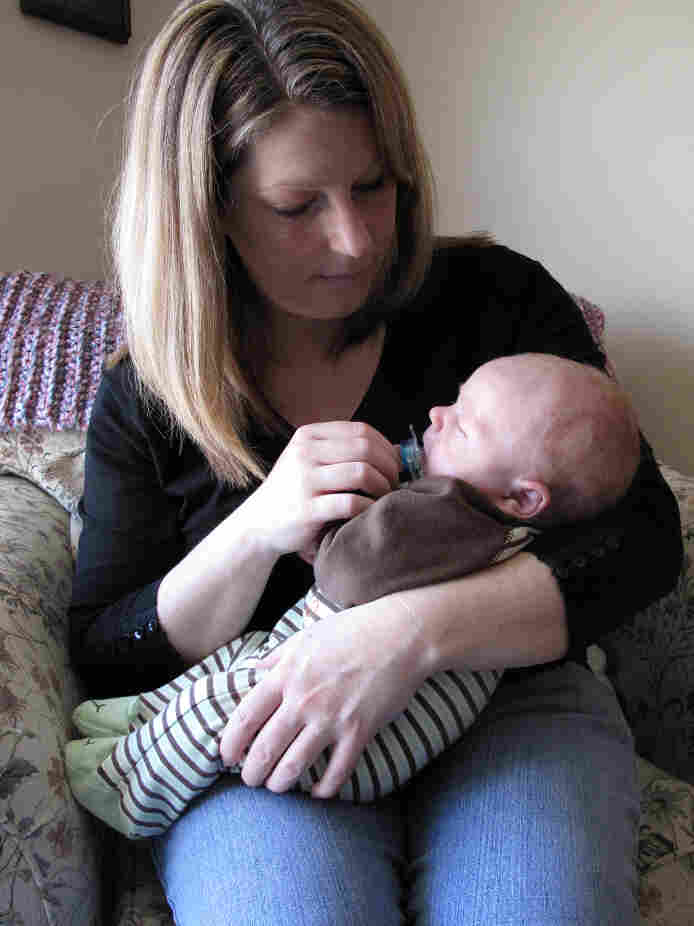 Carla Van Devander's son, Jackson, was conceived through in vitro fertilization that was financed by a scholarship from a nonprofit organization. Marisa Penaloza/NPR hide caption 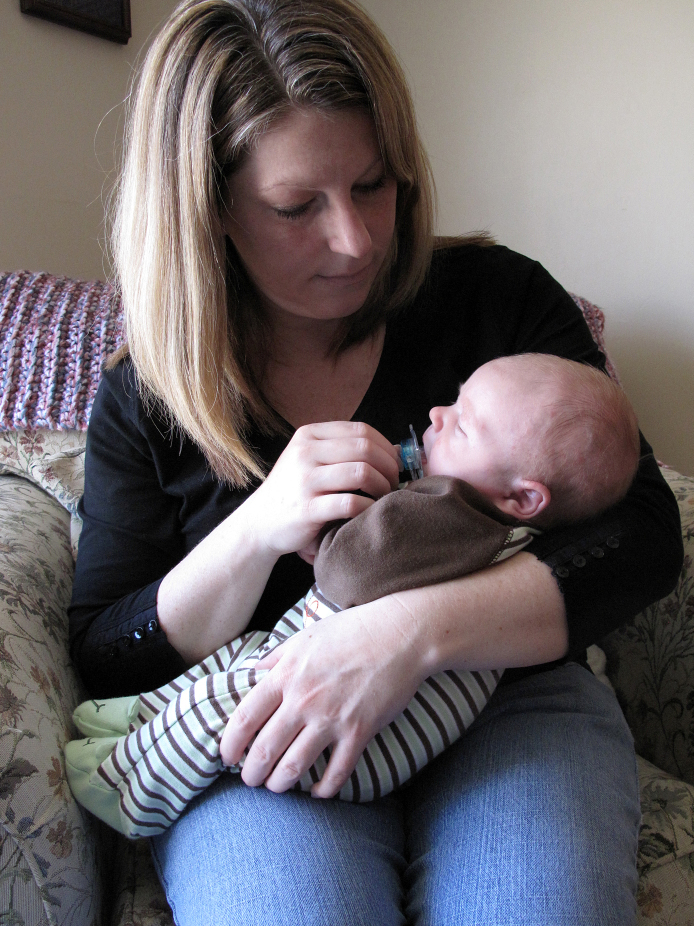 Carla Van Devander's son, Jackson, was conceived through in vitro fertilization that was financed by a scholarship from a nonprofit organization.

This story is part of an occasional series.

Today, couples who may never have become parents a generation ago have the wonders of technology to help them. One in every hundred babies in the U.S. is conceived in a laboratory. But because most insurance does not cover fertility treatments, a big barrier remains: money.

That stark reality hit Carla and CJ Van Devander of Staunton, Va., five years ago. They were crushed to find out they could not conceive, and Carla saw a painful irony. They're both teachers, devoted to helping bring up other people's children.

"What's the purpose of any of this," she says, "if you're not going to have your own children to try to help make the world a better place? I didn't think my life would have any real meaning."

Because the couple's modest teacher salaries left little extra after paying bills, Carla's parents helped them pay for a low-tech form of insemination. But four attempts all failed.

Next, doctors recommended in vitro fertilization, or IVF. That's when clinicians retrieve a woman's eggs and combine them with sperm in a petri dish to — hopefully — create embryos. It's a high-tech procedure with a whopping price tag of $10,000 to $15,000. Carla and CJ held their breath and took out a second mortgage. Carla got pregnant, but at 10 weeks she miscarried.

"So then we took out another loan for the second one," she sighs. This was a special fertility loan, with an interest rate of 17 percent.

"It's outrageous," she says, but they were desperate.

The couple had one frozen embryo left over. But on their way to have a third IVF procedure, the clinic called to say the embryo had not survived thawing.

Carla remembers being so depressed that she and CJ went test-driving cars, even though they couldn't afford to buy one. "It was a distraction," she says, "just to talk about something else so we're not crying anymore."

By this point, the Van Devanders were out $30,000.They had sold a motorcycle and talked about selling the house. Carla jokes that she was even willing to sell a kidney. Instead, they found the woman who would change their life.

From a cluttered home office in Northern Virginia, Nancy Hemenway runs a group with an unwieldy name: The International Council on Infertility Information Dissemination, or INCIID (pronounced "inside").

Hemenway started it with two women she met online in the '90s when they were all trying to become pregnant.

"We had a combined 16 years of infertility and 12 pregnancy losses between us," she says.

In addition to The International Council on Infertility Information Dissemination,there are other groups that offer financial aid to those who need help paying for treatment.

Each year, Fertile Dreams in Winter Park, Fla., offers several grants of up to $10,000 toward IVF expenses. The money can be used at any fertility clinic in the U.S.

In Cincinnati, Madeleine Gordon started one of the earliest aid organizations. Since 1995, her Gift of Life Foundation has helped several dozen women in the Greater Cincinnati area.

New York state also provides IVF grants on a sliding scale. The program is administered through East Coast Fertility, which also provides grants to patients who are not eligible for the state's IVF grant.

If you know about other programs, please describe in the Comments section below.

All three eventually did have children. And Hemenway, a schoolteacher, found a new career.

At first, the idea was to create an online space to share information. But there were the phone calls from women, in tears, distraught after doctors told them IVF was their only hope but they had no money for it.

"Why should having your pocketbook full be the criteria for whether or not you're able to have a child?" Hemenway asks.

Determined that it shouldn't, she came up with what she calls a Habitat for Humanity model of help: Couples apply for an IVF scholarship, and INCIID matches them with fertility clinics.

Applicants provide tax returns, pay stubs and other proof of financial need. An anonymous committee then vets them. INCIID has turned down some applicants who had large 401(k) accounts they could still tap into, but most are approved.

Here's how it works: Scholarship recipients agree to contribute $3,500 of their own. They've come up with all kinds of ways to raise the money, from bake sales to jazz concerts. That money keeps INCIID going. Hemenway then persuades drug companies to donate free medication, and doctors to donate their services.

"It's time to put a little bit back, I think," says Dr. Geoffrey Sher, executive medical director of the Sher Institutes for Reproductive Medicine. Its clinics around the country help several dozen INCIID patients each year.

"In vitro fertilization offers the only vehicle for having a baby to probably more than a million people in this country," Sher says.

He says the need for IVF in general is overwhelming.

"We only scratch the surface by providing about 100,000 plus with services throughout the year," he says.

So, those who pay for IVF are a fraction of those who could benefit from it, and the 50 or so women a year helped by INCIID's scholarships a smaller fraction still, which makes Carla Van Devander feel all the more lucky — and grateful.

After connecting with INCIID, it took nearly a year to arrange for her free IVF procedure. Amazingly, and happily, it worked.

The Van Devanders' basement is now crowded with a changing table, baby rocker and baby gym, all for six-week-old Jackson. Carla leans over him, her hair brushing his arms. His eyes light up and he flashes his latest achievement: a wet, gummy smile.

"I remember the day, the first time he looked right at me and gave me that big grin," she says. "I was like, 'Oh, my God! It's like winning the lottery!' "

That, of course, is basically what happened to Carla.

A broader solution for infertile couples would be to expand insurance coverage. But today only 15 states require any coverage for infertility treatment, and they set a lot of limits. Virginia has no mandate, and at one point the Van Devanders considered moving to another state that does.

For them, as for so many, becoming a parent was a financially and emotionally draining process. But Carla says she will be forever grateful to the doctors and nurses who helped her — and especially to INCIID's Nancy Hemenway.

"If there's a heaven," she says, "she's an angel and there are wings with her name on them."