Accessibility links
Working In Shadows: Best U.S. Policy Toward Iran? Cyberattacks, assassinations and defections are among the black operations that have replaced, at least for now, all talk of launching military attacks on Iran's suspect nuclear facilities. And covert operations are increasingly being viewed as the most effective approach, analysts say. 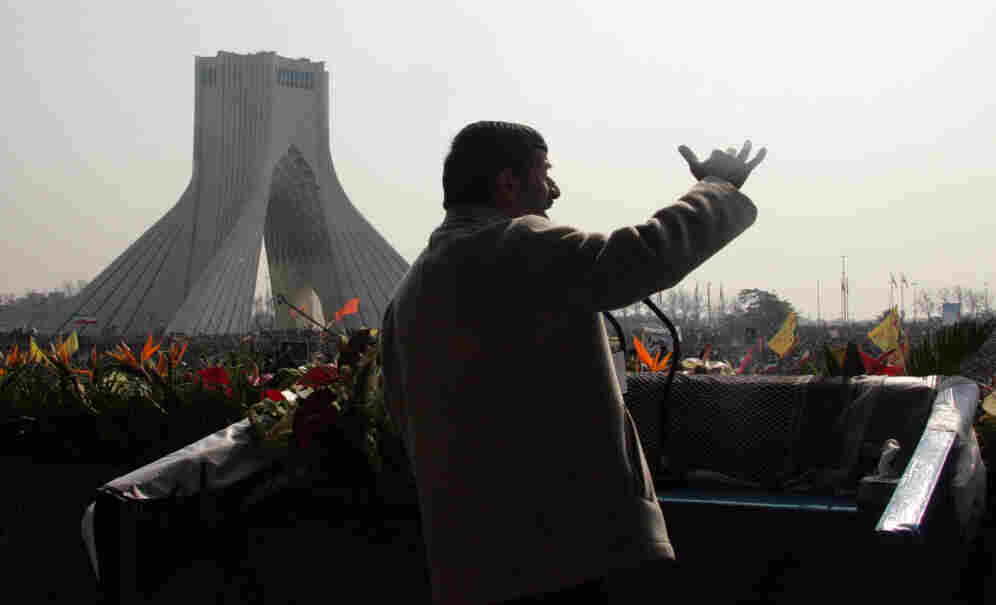 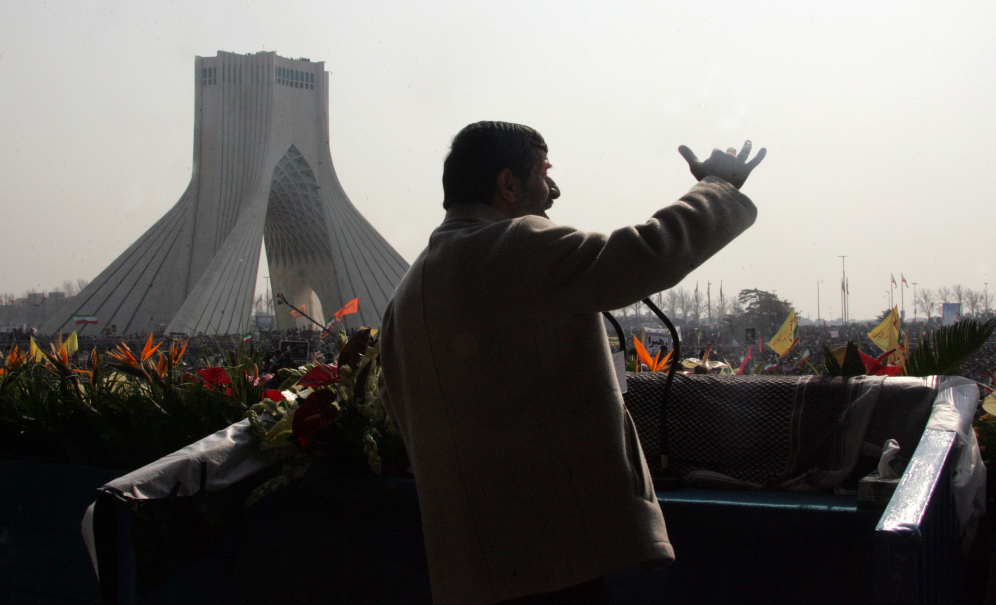 Iranian President Mahmoud Ahmadinejad addresses tens of thousands of Iranians gathered in Azadi (Freedom) Square in Tehran to mark the 31st anniversary of the Islamic Revolution on Feb. 11, 2010. Ahmadinejad said Iran had produced a "first stock" of 20 percent enriched uranium for its nuclear program.

For years, successive U.S. administrations have been at a loss to figure out how to change what they call Iran's bad behavior. But in the past year, another option has emerged, says Karim Sadjadpour, an Iran specialist with the Carnegie Endowment for International Peace.

"I think there's a perception that shunning Iran, ignoring Iran, is not an option," Sadjadpour says. "Bombing Iran or military engagement with Iran would exacerbate a lot of these challenges. And so the option we're left with is this kind of more creative in-between option of covert war and sabotage and economic coercion."

This covert war — involving cyberattacks, assassinations and bombings, and defections — has proved more effective than diplomacy. And these black operations have replaced, at least for now, all the talk of launching military attacks on Iran's suspect nuclear facilities.

Covert War With Iran: A 'Wilderness Of Mirrors'

Some even argue that this covert war has become, in effect, the primary tool of U.S. policy toward Iran.

Unlike the other approaches to Iran, the clandestine war — with the help of economic sanctions — has had some success. Last year, cyberattacks, and the computer virus known as the Stuxnet worm, destroyed nearly a thousand centrifuges used to enrich uranium.

Other instances of sabotage have slowed down and for a short time stopped the uranium enrichment process entirely at Iran's key facility. Iranian scientists can no longer feel confident that the high-tech equipment they are buying on the international market is free of bugs or will work as it was designed to.

Increasingly, these operations in the shadows are coming to be seen as the most effective approach, replacing more controversial and dangerous policies, says Muhammad Sahimi, a professor at the University of Southern California who writes for the website Tehran Bureau.

"Some people have pointed to the success of this covert war as meaning that there is no need for overt military attack on Iran's nuclear program or other sensitive facilities because apparently these programs are having great success," Sahimi says.

A Substitute For Military Action

There has been much discussion in the U.S. over the past five years about whether Iran is seeking to acquire a nuclear weapon — its leaders deny that — and what the benefits and costs might be of military action to prevent that from happening.

It can be seen as a very helpful, non-bloody way of buying time and holding off pressure to use military force that would lead to a U.S. and Iranian war.

Paul Pillar, a professor of security studies at Georgetown University

"To the extent it is an alternative to the use of military force, which has been of course talked up considerably in our country, it can be seen as a very helpful, non-bloody way of buying time and holding off pressure to use military force that would lead to a U.S. and Iranian war," Pillar says.

He adds that one of the benefits of covert action is the confusion, paranoia and fear that these activities create among Iran's leaders.

"I expect they assume that the United States as well as Israel is responsible for a great deal of what is happening, whether or not they are indeed responsible," Pillar says.

"The Iranian intelligence ministry, despite all its claims, hasn't done a good job in tracking down who, for example, was behind the assassination attempts of last year and explosions that were reported in some military bases and so on," Sahimi says.

And because covert ops are just that — secret — they are not saddled with a great disadvantage of military action: the likelihood that Iranians will close ranks around the current government in Tehran if the U.S. or Israel attacks, according to Sadjadpour.

All in all, this is a far better way to handle the numerous challenges that Iran has presented the U.S. with for many years, says Bruce Riedel, a former CIA analyst now with the Saban Center at the Brookings Institution.

"If we can delay the Iranian program, if we can upset Iran's terrorist activities through use of clandestine means, that's a far more effective and useful way of disrupting Iran's ambitions than having to send American forces into harm's way," Riedel says.

This suggests that in the coming months, there will be more stories emerging about cyberattacks and defections, and about the occasional assassination and bombing as the clandestine war against Iran widens.