Accessibility links
Pacman: Last Of The Great Boxers? Manny Pacquiao may be one of the greatest athletes out there right now. But, as commentator Frank Deford points out, not many people are paying attention. 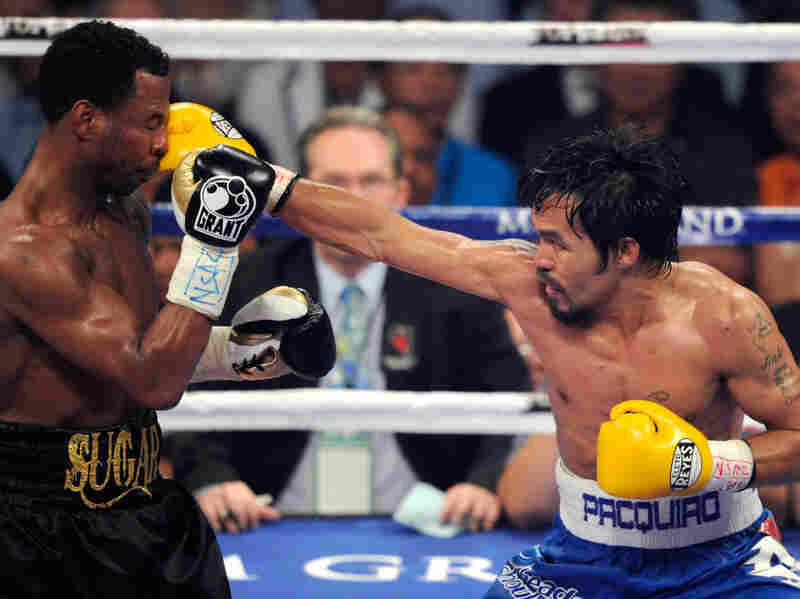 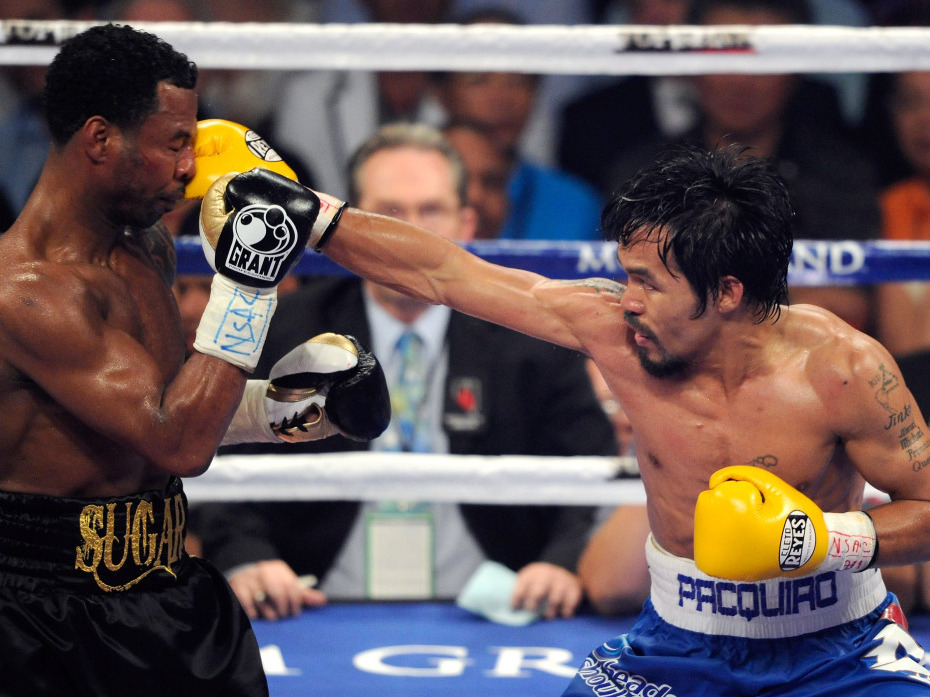 Manny Pacquiao hits Shane Mosley in the seventh round of their WBO welterweight title fight at the MGM Grand Garden Arena in Las Vegas on May 7. Pacquiao retained his title with a unanimous-decision victory.

In a springtime of pro basketball and hockey playoffs, of NASCAR and, heaven help us, mixed martial arts, it may be hard for anybody on the sunny side of the baby boom era to appreciate that what took place last Saturday would have been, not so long ago, about the biggest sports day of the year.

Yes sir, both the Kentucky Derby — the fabled Run for the Roses — and the greatest boxer on the planet, the legendary Pacman, defending his title. Same day. What a twin bill.

Yes, hard to believe, but for many decades in America, after baseball and college football, the two most popular sports were horse racing and boxing. Both, of course, have long been in decline, but at least the Derby always still grabs some attention. If nothing else, it certainly delivers proof that our stylish ladies have better taste in hats than those millinery monstrosities that filled up Westminster Abbey.

But poor boxing. Only the field of Republican presidential candidates gets less attention. Or admiration.

Everything that has grown wrong with boxing was on display Saturday night. Only, of course, it wasn't on display because hardly anybody saw it. Manny Pacquiao, the greatest boxer of the century, an absolute marvel of nature, who has won titles in eight divisions, ranging from 112 pounds to 154 pounds, was in the ring. But of course, per the usual boxing arrangement, while you could watch the Derby and the NBA and the NHL and your local baseball team and golf and tennis and Lord knows what else on TV free, it cost $55 if you wanted to stay up past your bedtime and take a gander at the man who is probably the greatest athlete presently working the planet.

And, of course, for your $55, Pacquiao is beating up on a 39-year-old has-been, because the one opponent everybody wants to see him fight, the undefeated Floyd Mayweather Jr., allegedly won't get in the ring with Pacquiao for less than $100 million. Only in boxing do the best avoid the best. And so the sport fades a little more into the background.

Maybe good riddance. Given the revealing new research into sports concussions, it's harder and harder to mount a defense for boxing. At least, though, Pacquiao lends some class to his grubby discipline. He's a congressman in the Philippines, who is genuinely dedicated to the cause of alleviating poverty in his homeland. He's an original.

I've always thought that the two disparate countries that most feature personal nicknames are Australia and the Philippines. In Melbourne or Manila, every man you meet has a cognomen. As for Pacquiao, besides the obvious Pacman, in Tagalog, he's Pambansang Kamao. That translates to: The National Fist.

They don't make nicknames like that anymore in sports. The National Fist.

And I guess boxing is now The National Fizzle.