Accessibility links
Appeals Court Hears Challenges To Health Law The hearing in Richmond, Va., marked the first time any of the dozens of lawsuits filed against last year's law have reached the appellate level, and brings the measure a step closer to what most predict will be a legal showdown that will only end at the Supreme Court sometime in 2012. 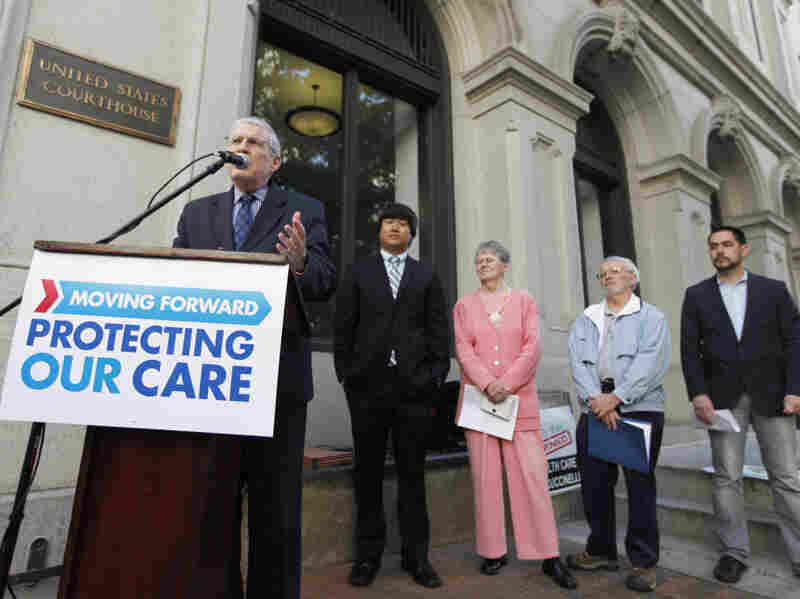 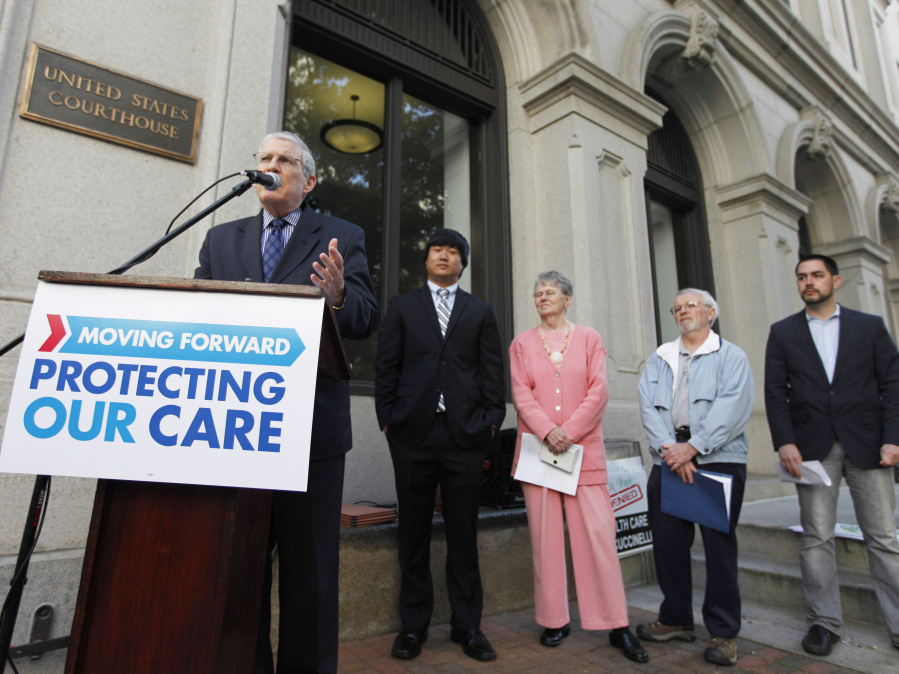 Supporters of President Obama's health care policies hold a rally Tuesday in front of a federal court in Richmond, Va.

It marked the first time any of the dozens of lawsuits filed against last year's law have reached the appellate level, and brings the measure a step closer to what most predict will be a legal showdown that will only end at the Supreme Court sometime in 2012.

Even before the court proceedings got under way in Richmond, however, supporters and opponents of the law gathered outside the federal courthouse on a busy downtown Richmond street corner.

Among those urging the judges to keep the law intact was Kevin Wilson, who owns two restaurants in Richmond. He said he has already been able to take advantage of some of the health law's provisions. Last year he started getting a tax credit available only to small businesses that helps him pay for his employees' health insurance.

He said that has helped his business in other ways.

"This has allowed me to reinvest in equipment and maintenance, which would have otherwise been impossible in this economy," Wilson said.

But across the street, opponents of the law held their own rally, sponsored by Americans for Prosperity and the Virginia Tea Party Patriots.

Inside the courtroom, meanwhile, the focus was also on limits, of a sort. The big question involved in both cases concerns the "commerce clause" of the U.S. Constitution that allows Congress to regulate commerce between states. But can it be used to require virtually all Americans to have health insurance, or, if not, to pay a penalty?

"The government cannot point to any single case where idleness, a choice not to engage in an economic transaction, has been found reachable under the commerce clause," said attorney Matthew Staver, who argued the case on behalf of Liberty University in Lynchburg, Va.

Liberty charged that the so-called individual insurance mandate is unconstitutional because Congress can't use the commerce clause to reach people who don't do anything — in this case, don't buy health insurance. The district court judge in that case disagreed. He upheld the requirement and the law.

The judges on the appeals court panel, chosen at random by a computer program but all appointed by Democratic presidents, seemed likely to uphold the law as well.

Still, the Obama administration wasn't taking any chances. It sent to Richmond to argue the cases not just any lawyer, but Neal Katyal, the acting U.S. solicitor general, who normally only argues cases at the Supreme Court. 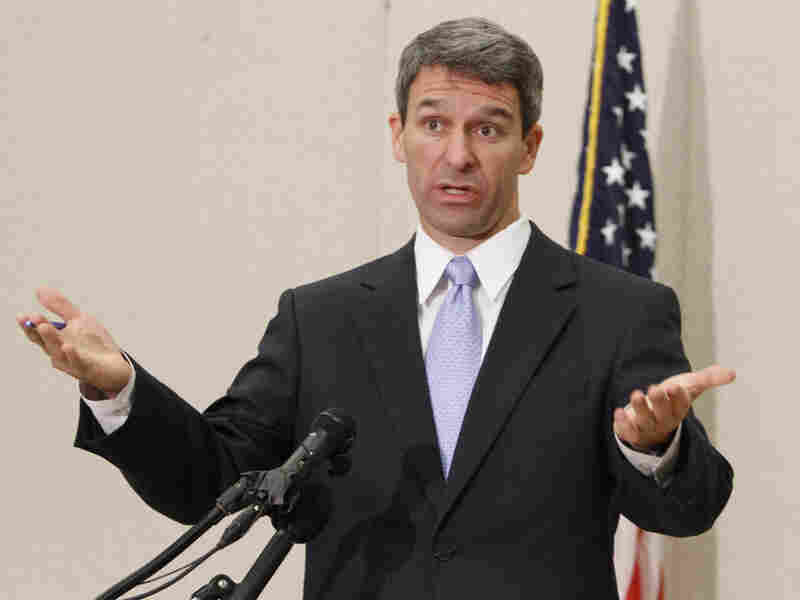 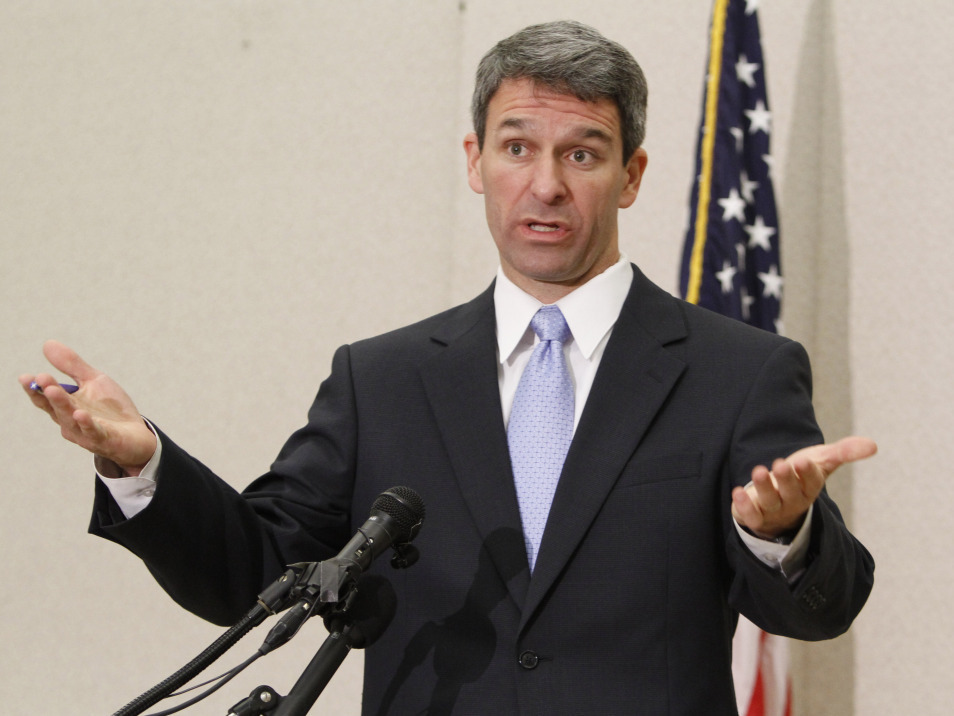 Katyal drove his point home repeatedly: Health care is not like any other product; everyone consumes it, whether they buy insurance or not.

"That is a virtually universal feature of human existence," he told the judges. "Everyone is going to seek health care. Nobody can know precisely when."

Of course that's not how opponents of the law, like Virginia Attorney General Ken Cuccinelli, see it.

"If we cross this constitutional line with health care now, where the government can force us to buy a private product, and say it's for our own good, of course, then we will have given the government the power to force us to buy other private products, such as cars, gym memberships, or today's chosen vegetable of discussion, broccoli," Cuccinelli told reporters at a news conference after the arguments.

Unlike Liberty University, Cuccinelli won his case at the lower court level. It involves a Virginia state law that forbids insurance mandates of the type in the federal law. But the three appeals court judges seemed skeptical about whether Virginia actually has legal standing to sue the federal government.

Walter Dellinger, a former U.S. solicitor general who has been advising Democrats in Congress, said he wasn't surprised, and wouldn't be surprised if Virginia's suit gets dismissed on the standing issue alone.

The 4th U.S. Circuit Court of Appeals, which heard Tuesday's cases, is known for making its decisions quickly. That could mean weeks rather than months. Meanwhile, two other cases are headed for appeals court hearings in other parts of the country early next month.