Accessibility links
Hedge Fund Boss Found Guilty In Vast Insider Trading Case Raj Rajaratnam, co-founder of Galleon Group, was convicted Wednesday of 14 federal charges. Prosecutors said he made a fortune by coaxing a crew of corporate tipsters to give him an illegal edge on blockbuster trades in technology and other stocks. 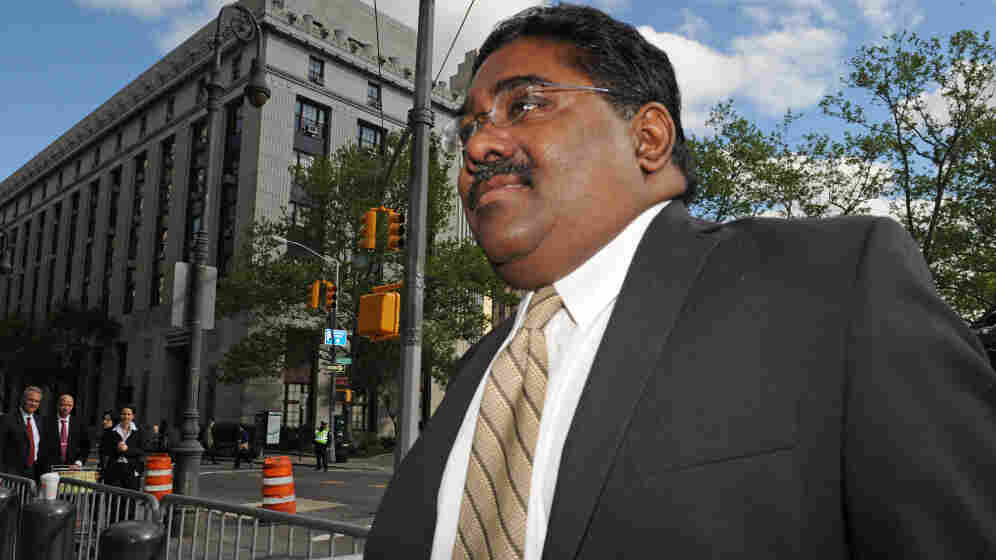 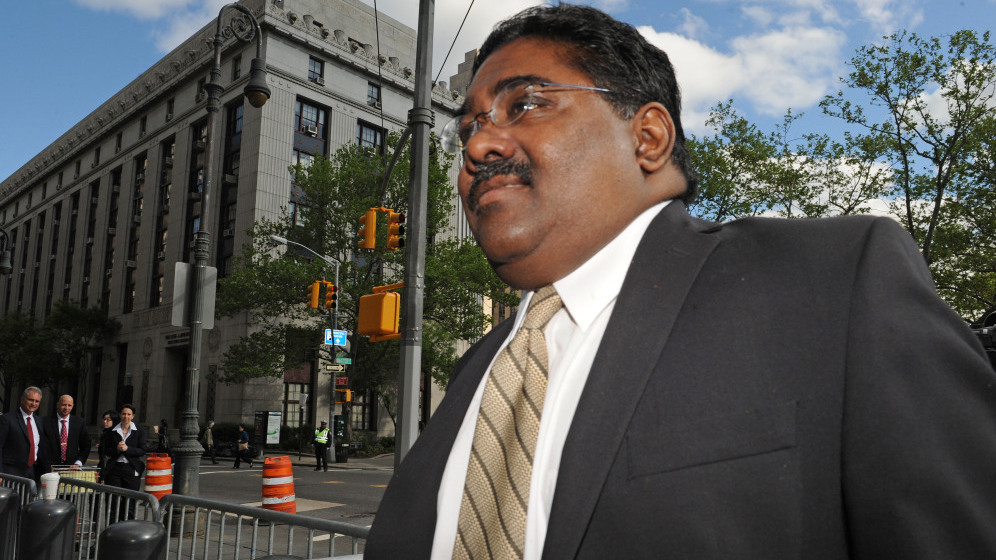 A former Wall Street titan was convicted Wednesday of making a fortune by coaxing a crew of corporate tipsters to give him an illegal edge on blockbuster trades in technology and other stocks in what prosecutors called the largest insider trading case ever involving hedge funds.

Sri Lanka-born Raj Rajaratnam was convicted of five conspiracy counts and nine securities fraud charges at the closely watched trial in federal court in Manhattan. The jury had deliberated since April 25, and at one point was forced to start over again when one juror dropped out because of illness.

Prosecutors had alleged the 53-year-old Rajaratnam made profits and avoided losses totaling more than $60 million from illegal tips. His Galleon Group funds, they said, became a multibillion-dollar success at the expense of ordinary stock investors who didn't have advance notice of the earnings of public companies and of mergers and acquisitions.

Rajaratnam will remain free on bail, with electronic monitoring, at least until his July 29 sentencing.

His lawyer, John Dowd, tried to put a positive spin on the verdict by pointing out that prosecutors had originally charged his client with 37 counts, many of which were dismissed before the trial began.

"So the score is 23-14 in favor of the defense. We'll see you in the 2nd Circuit, thank you," he said, referring to his plan to appeal.

The verdict came after seven weeks of testimony showcasing wiretaps of Rajaratnam wheeling and dealing behind the scenes with corrupt executives and consultants. Some of the people on the other end of the line pleaded guilty and agreed to take the witness stand against him.

Authorities said the 45 tapes used in the case represented the most extensive use to date of wiretaps common in organized crimes and drug cases in a white-collar case.

The defense had fought hard in pretrial hearings to keep the avalanche of audio evidence out of the trial by arguing the FBI obtained it with a faulty warrant. Once a judge allowed them in, prosecutors put the recordings to maximum use by repeatedly playing them for jurors.

"You heard the defendant commit his crimes time and time again in his own words," Assistant U.S. Attorney Reed Brodsky said in closing arguments.

"The tapes show he didn't believe the rules applied to him," the prosecutor added. "Cheating became part of his business model."

The wiretaps appeared to play prominently in the jurors' deliberations: They asked to return to the courtroom countless times so they could listen to them again.

Former Securities and Exchange Commission member Joseph Grundfest said that in the end, the wiretaps were powerful evidence against Rajaratnam.

"Even though as a technical matter Rajaratnam was never called to the witness stand, he in effect testified against himself over and over and over again when the jury heard his voice on the tape," he said.

The defense argued that the tapes revealed nothing more than that Rajaratnam was doing his duty by asking questions about information already circulating in the "real world" of high finance.

"That happens every day on Wall Street," Dowd said. "There's nothing wrong with it."

But the evidence extended beyond the tapes. The government reached plea deals with some of Rajaratnam's contacts, and several of them testified against him.

"It's one thing when you just have the tape. It's another thing when you have the people caught on the tapes explaining the tapes," said Rita Glavin, a former head of the Justice Department's criminal division who is now with the law firm Vinson and Elkins. "That's powerful evidence that you rarely see in acquittal in that type of circumstance."

Dowd headed a team of attorneys who crowded around the defense table each day. The defendant took an uncustomary position on a bench behind them and listened along with jurors as his voice filled the courtroom.

In one July 29, 2008, call, Rajaratnam could be heard grilling former Goldman Sachs board member Rajat Gupta about whether the board had discussed acquiring a commercial bank or an insurance company.

"Have you heard anything along that line?" Rajaratnam asked Gupta.

"Yeah," Gupta responded. "This was a big discussion at the board meeting." Prosecutors sought to maximize the impact of the Gupta tape by calling Goldman Sachs' chairman Lloyd Blankfein to testify that the phone call violated the investment bank's confidentiality policies.

Gupta, who has not been charged, has denied any wrongdoing. The government also has played tapes of Rajaratnam that it said proved he was trading secrets and orchestrating cover-ups with fellow hedge fund manager Danielle Chiesi, who has pleaded guilty in the case.

"I mean, I think this stock could go up $10 you know? But we got to keep this radio silence," Rajaratnam said in one tape.

"Oh please. That is my pleasure," Chiesi responded.

"Not even to your little boyfriends, you know?"

"No, believe me, I don't have friends," she replied.

Rajaratnam advised Chiesi to buy 1 million shares of tech stock on an inside tip, then sell 500,000 of those shares — a tactic prosecutors say was used to throw regulators off the trail. In another instance, about 30 minutes of calls with an Intel tipster scored Rajaratnam a $2 million windfall on the computer chip-maker's stock, prosecutors said.

Former financial consultant Anil Kumar testified that he and Rajaratnam, his former classmate at the University of Pennsylvania's prestigious Wharton School, broke the law by speaking regularly about the negotiations over the acquisition of ATI Technologies Inc. by Kumar's client, Advanced Micro Devices Inc., before the deal was announced.

"I told him that this was 'red hot' and shouldn't be discussed," Kumar said. Later, he said he cautioned the defendant, "This is going to be a complete shock to the industry ... so treat this with the strictest of confidence."

Prosecutors say Rajaratnam raked in $20 million by trading on his advance notice of the ATI-AMD deal. Afterward, he called Kumar at home and said, "You're a star," Kumar told the jury in federal court in Manhattan.

When Rajaratnam later informed Kumar that he would be rewarded with a $1 million kickback, "I almost fell off my chair," the witness said.

The Galleon probe has resulted in more than two dozen arrests and 21 guilty pleas. It also has led to a second investigation aimed at consultants in the securities industry who pass off inside information as the product of legitimate research.

Only Rajaratnam has gone to trial and relived conversations that the insiders never suspected were being monitored. On one tape, Rajaratnam sounded sheepish when one particularly effusive tipster praised him for being a star in the hedge fund universe.

"The myth," Rajaratnam said, "is larger than the reality."

NPR's Jim Zarroli contributed to this report, which contains material from The Associated Press.

The Wiretaps That Built The Case Against Galleon's Rajaratnam May 11, 2011
PLANET MONEY: More Cases To Come? May 11, 2011
After Financial Crisis, Wheels Of Justice Turn Slowly April 20, 2011