Accessibility links
Syrian Refugee: Protesters Can't Stop Now Abu Omar was a house painter in Homs, the country's third-largest city. When the government began cracking down on demonstrators, he became a protester. After security forces started going house to house, he says, he decided to flee with his family. But he says there's no turning back for the protesters now. 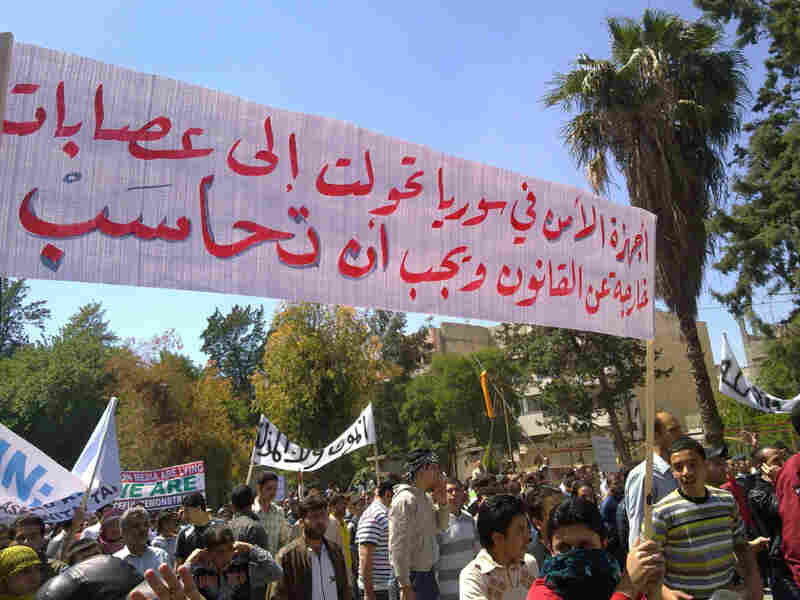 A citizen journalism image made on a mobile phone and acquired by the AP shows anti-government protesters during a rally in Homs on May 6. AP hide caption 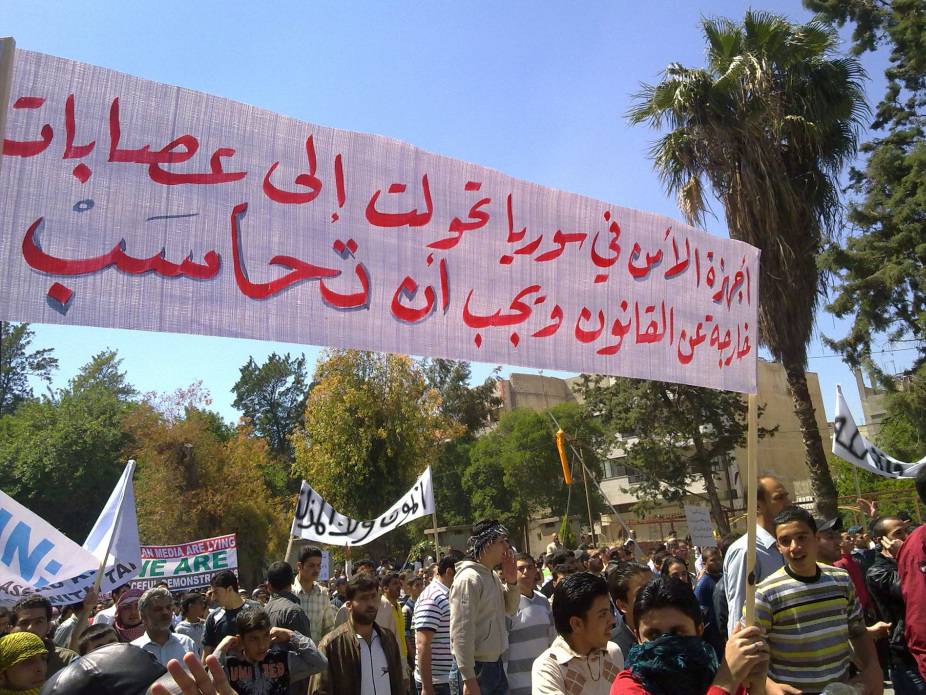 A citizen journalism image made on a mobile phone and acquired by the AP shows anti-government protesters during a rally in Homs on May 6.

Tank shells crashed into residential neighborhoods in the Syrian city of Homs on Wednesday. The country's third-largest city has been a hub of anti-government protests in recent weeks.

Abu Omar recently fled Homs to Lebanon. Before the trouble in Syria started, he was a house painter. The country's economy was opening up and people were building. He says his children had free education and free health care.

Most people were focused on getting by, he says, not on political reform. Nearly every neighbor had a relative who'd been punished for trying to get involved in politics.

"People disappear — nobody knows anything about them for 10, 12 years," Omar says through an interpreter. "We used to think about it, but we couldn't do anything about it."

Then Tunisia overthrew its dictator. Then Egypt.

In Syria, some teenagers in the southern city of Daraa sprayed graffiti on walls, calling for the "doctor" — a nickname for Syrian President Bashar Assad — to go. The teenagers were arrested and allegedly tortured, and the protests spread.

It wasn't until Syrian tanks and troops entered Daraa and other cities, and hundreds of people started dying, that Omar decided he couldn't take it anymore. Two and half weeks ago, he joined his first Friday protest.

Omar says the oppression had become unbearable. "The entire Syrian people have to rise up, or else there is going to be a genocide," he says.

After last Friday's protest, tanks started rolling into Omar's city, Homs. He watched from his balcony as tank shells destroyed a shopping center down the street. Forces sealed off all entrances to the city, cut off electricity and shot out water tanks, he says.

Families ran out of bread. Then, he says, security forces started going house to house.

"And instead of arresting the men, they decide to start arresting women under 50," Omar says.

To any Arab man, the implication was clear: We will detain your women and rape them. It was this that finally convinced Omar to pack up the women and children, and leave. Now he and nearly 30 relatives are staying with family in northern Lebanon.

Analysts in the region say it's people like Omar who make up the second wave of a revolution.

First, it's the activists who organize protests online and use satellite phones and Skype to get the word out. Then, when the regime starts killing, detaining and torturing protesters, it's people like Omar who get radicalized.

Omar shows the videos that appeared on his phone during the latest protest. Dead bodies are lying on the ground under tarps.

Omar says there's no turning back — the country is destroyed; the economy is destroyed. They can't stop now, he says.

"Syria is a country of 23 million people," he says. "We're willing to lose 1, 2 more million people. Every father in Syria has about four or five boys that he's willing to send to protest for their freedom."

Omar says he'd be satisfied if Assad would allow for real elections — or if Assad just does what Omar calls a courageous thing, and steps down.

A Call For Help

In recent interviews with The New York Times, Assad's advisers have vowed he'll stay in power.

Omar says Assad's regime is wrong to threaten the world that its demise could lead to chaos — like Iraq after the fall of Saddam Hussein. Omar says it's the regime that is promoting sectarian violence, by pitting pro-regime Alawites, who adhere to an offshoot of Shiite Islam, against anti-regime Sunnis. That violence will only get worse, he says, if Assad hangs onto power.

The Obama administration reportedly is considering whether to call for Assad's ouster. Arab countries are said to be divided, and Syria's powerful neighbor, Turkey, has been critical, up to a point.

That help was supposed to come in part from a U.N. aid mission into southern Syria. But so far the convoy has not been allowed into the country.