Accessibility links
Japan Backs Off Of Nuclear Power After Public Outcry Prime Minister Naoto Kan has announced that the country will no longer seek to build 14 more nuclear plants. He also convinced the operators of a plant west of Tokyo to suspend operations. Kan's decisions came after an unusual number of public demonstrations. 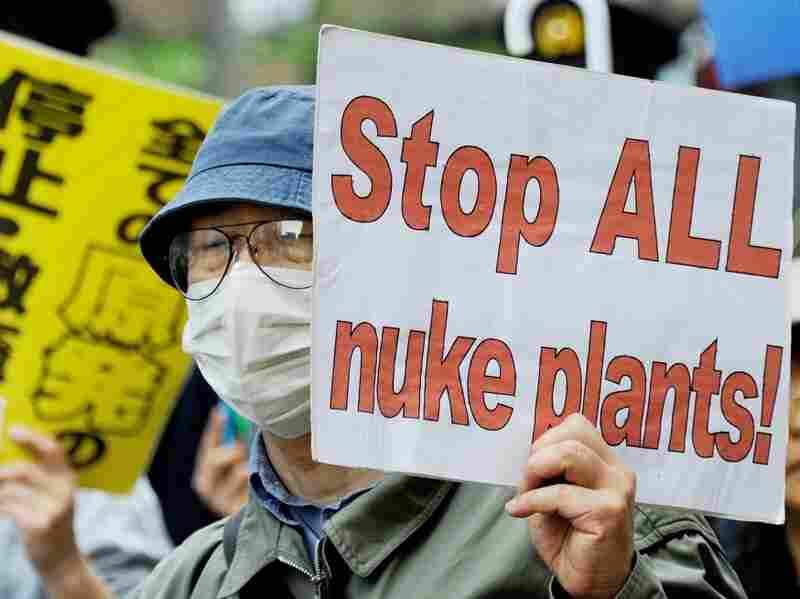 A man holds a placard during a march denouncing the use of nuclear plants and power during a demonstration in Tokyo on May 1. Toru Yamanaka /AFP/Getty Images hide caption 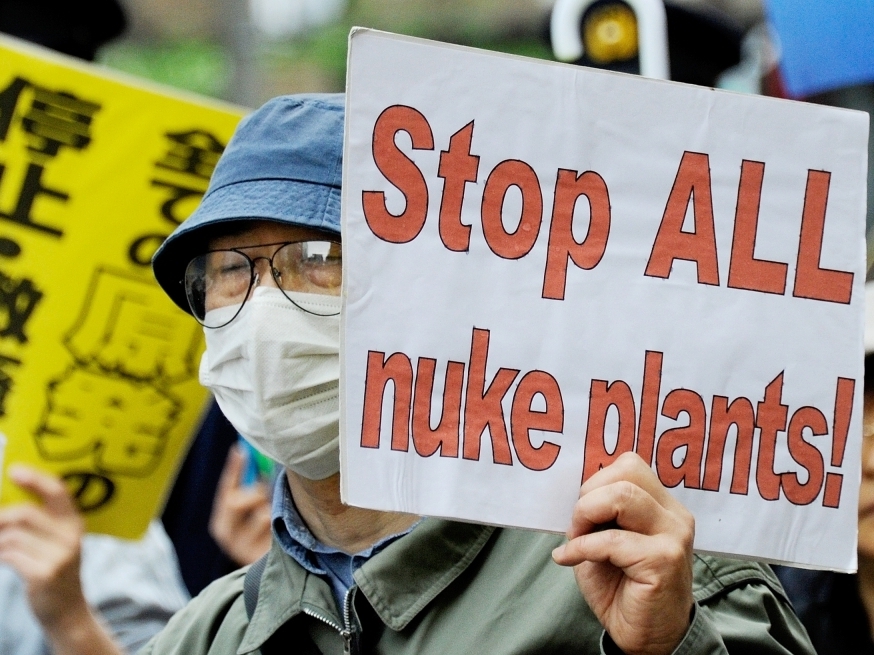 A man holds a placard during a march denouncing the use of nuclear plants and power during a demonstration in Tokyo on May 1.

Japan is reassessing how it produces electricity after March's earthquake and tsunami sparked a crisis at the Fukushima nuclear power plant.

Prime Minister Naoto Kan this week persuaded the operators of another nuclear plant west of Tokyo to temporarily close it to make safety improvements. And he is canceling a plan to build more nuclear facilities.

Kan's decisions to back away from nuclear power came after an unusual number of public demonstrations. The protests have been more frequent because many Japanese have grown impatient with the government, says Koichi Nakano, who teaches political science at Sophia University in Tokyo.

"Skeptics argue that, in fact, Japan has enough energy already as of now without nuclear power plants, using fossil fuels and hydro-electronic power generation, and so I think people are now becoming gradually exposed to those new facts," Nakano says.

Declining public support for nuclear power appears to be having an impact on Kan's thinking. In addition to convincing the operators of the Hamaoka nuclear power plant, about 125 miles upwind from Tokyo, to suspend operations, Kan acted again on Tuesday. He announced out of the blue that the country will no longer seek to build 14 new nuclear plants, scrapping a goal of producing half of Japan's power needs with nuclear energy. More than a quarter of Japan's electricity is now produced by nuclear power.

"After this big incident occurred, I think the current basic energy policy plan needs to be discussed from scratch," he said. "In such discussion, we should ensure more safety of nuclear energy."

That's the kind of rethinking many in Japan have been calling for.

Tomoko Abe, a member of Japan's Lower House, is a leader of a group of lawmakers looking to force the government to consider alternatives to nuclear power. They call their group Energy Shift Japan.

"Japan has always had risk," says Abe, a Social Democrat. "It is sitting on this island with lots of earthquakes, and now there are plants sitting on them. We're at a point where all politicians must check the old policy and decide whether we should go on — or change." 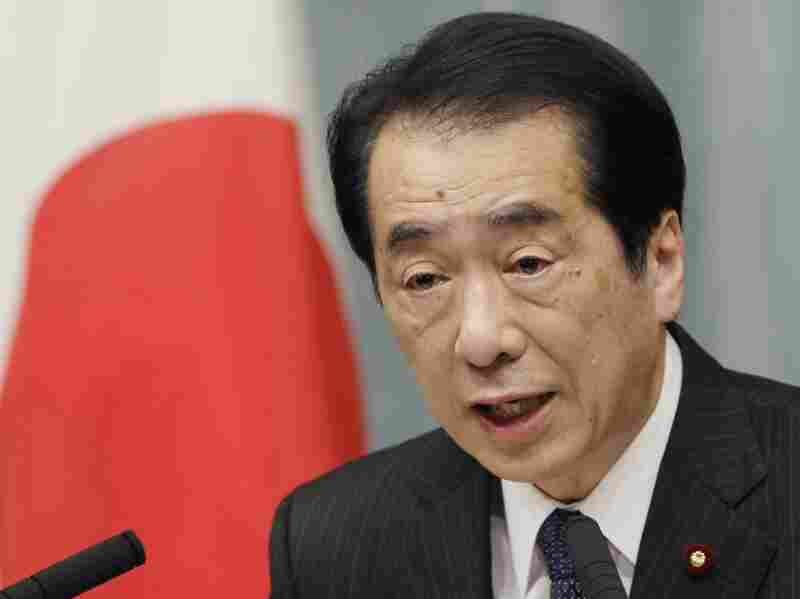 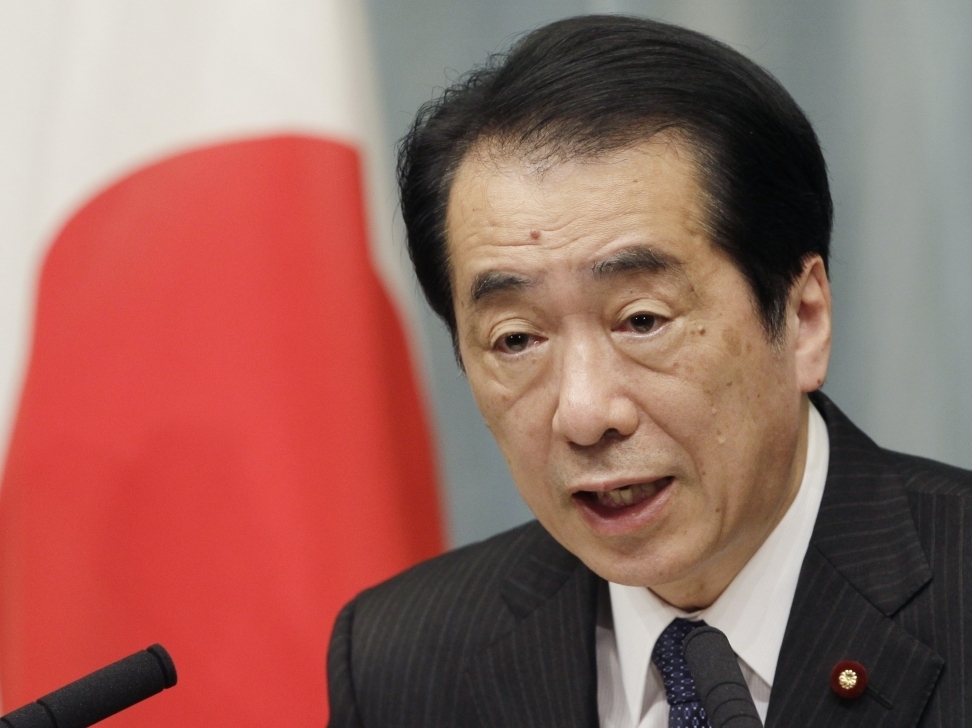 On Tuesday, Japanese Prime Minister Naoto Kan announced that the country will no longer seek to build 14 new nuclear plants.

Abe's group is pushing a proposal that would allow green energy sources — including solar, wind and biomass — to be given access to Japan's power grid.

About half of Japan's electrical power is generated by natural gas and coal. The nuclear crisis here is likely to lead to more use of those fossil fuels and possible power shortages this summer. Officials are already calling on residents to conserve electricity. Some lights have been dimmed and escalators shut down. But in a country where heated toilet seats are not uncommon, getting residential users to cut back on demand remains a challenge.

At the headquarters of the electrical workers' union, they've even turned off an aquarium in the lobby to save power. It's unclear what happened to the fish.

But Atsushi Uchida, the union's general secretary, is skeptical about the push for alternative energy. He says that Tokyo's entire metro area would have to be covered with solar panels to replace the electricity produced by one of the reactors at Fukushima. And although he concedes peoples' concern about safety, he calls nuclear power indispensable.

It's a common attitude among Japanese industry and many in government — and it illustrates the challenge of bringing about change to Japan's energy mix.