Accessibility links
Foreign Species Invade San Francisco Bay California is cracking down on invasive species. The state has passed the strictest rules in the country to prevent cargo ships from introducing foreign plants and animals to San Francisco Bay. But the new environmental standards are so tough, officials say they may not be able to enforce them.

California is cracking down on invasive species, and that could have a big impact on national regulations due out later this year. The state has passed the strictest rules in the country to prevent cargo ships from bringing foreign plants and animals to San Francisco Bay. But the standards are so high, California may not be able to enforce them. 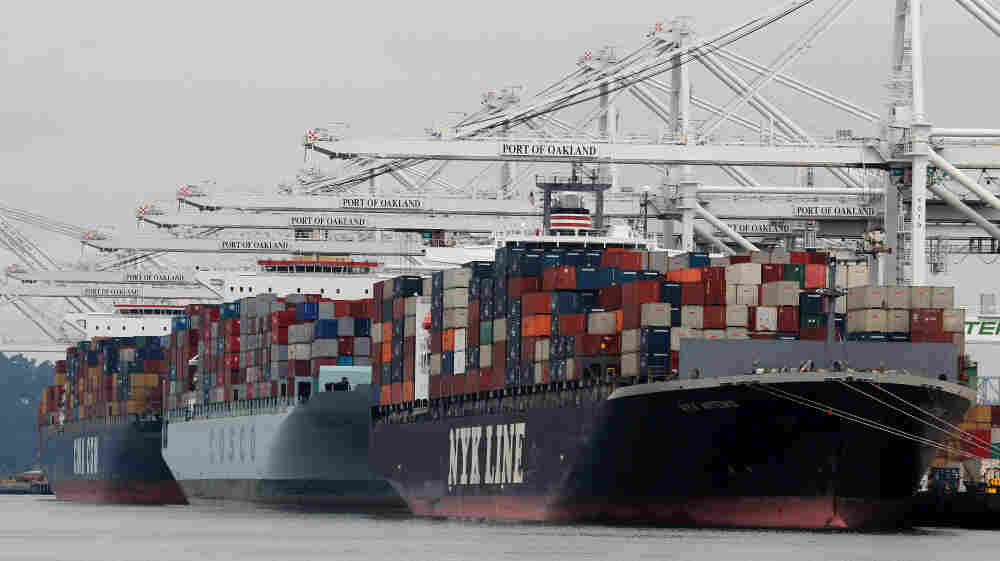 Container ships are positioned under cranes at the Port of Oakland in California. Ships carrying cargo have introduced rash-causing parasites and the Asian clam, which has altered the food web of San Francisco Bay. Justin Sullivan/Getty Images hide caption 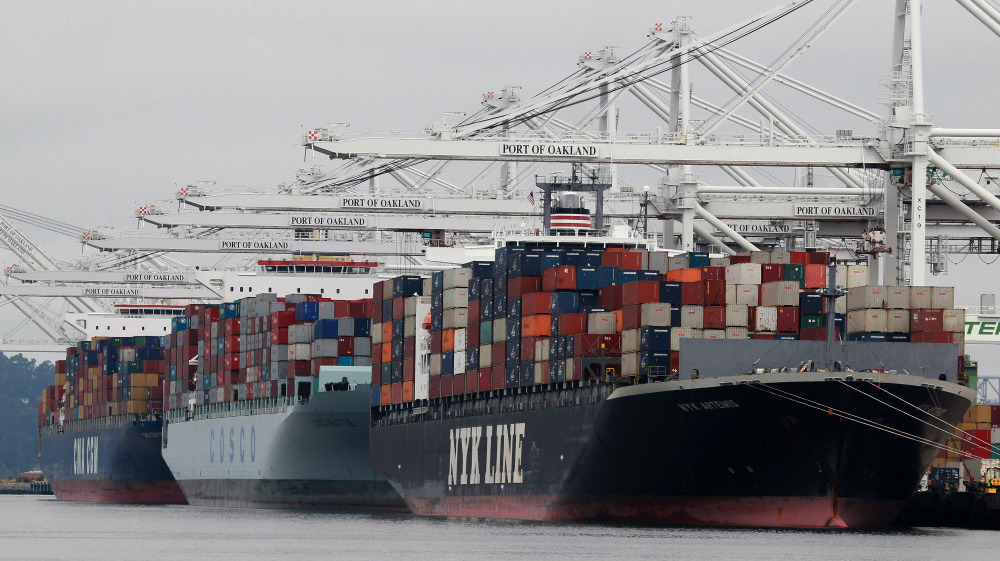 Container ships are positioned under cranes at the Port of Oakland in California. Ships carrying cargo have introduced rash-causing parasites and the Asian clam, which has altered the food web of San Francisco Bay.

Trucks and cranes spring into action as a 900-foot container ship docks at the Port of Oakland. Every year, thousands of ships pass under the Golden Gate Bridge. They bring cars, sneakers, computers — and exotic organisms.

Biologist Andrew Cohen of the Center for Research on Aquatic Bioinvasions sees four of them. He slogs through a muddy beach in the eastern Bay Area and scoops up a clump of seaweed that's home to clams and snails. Cohen also spots some yellow dots, and he says they are "the egg mass of a Japanese sea slug which showed up here a few years ago."

Biologists have found hundreds of invasive species in San Francisco Bay, which Cohen says makes it one of the most invaded estuaries in the world. 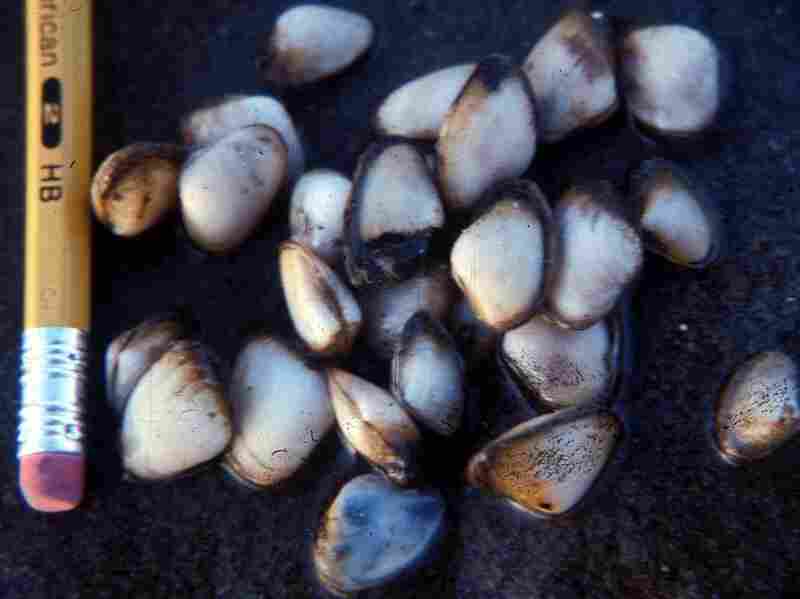 Several Asian clams are seen in this 1994 photo, after they were taken from San Francisco Bay. The Asian clam is one of hundreds of aquatic alien species that thrive in the Bay Area. Andrew N. Cohen/San Francisco Estuary Institute via AP hide caption 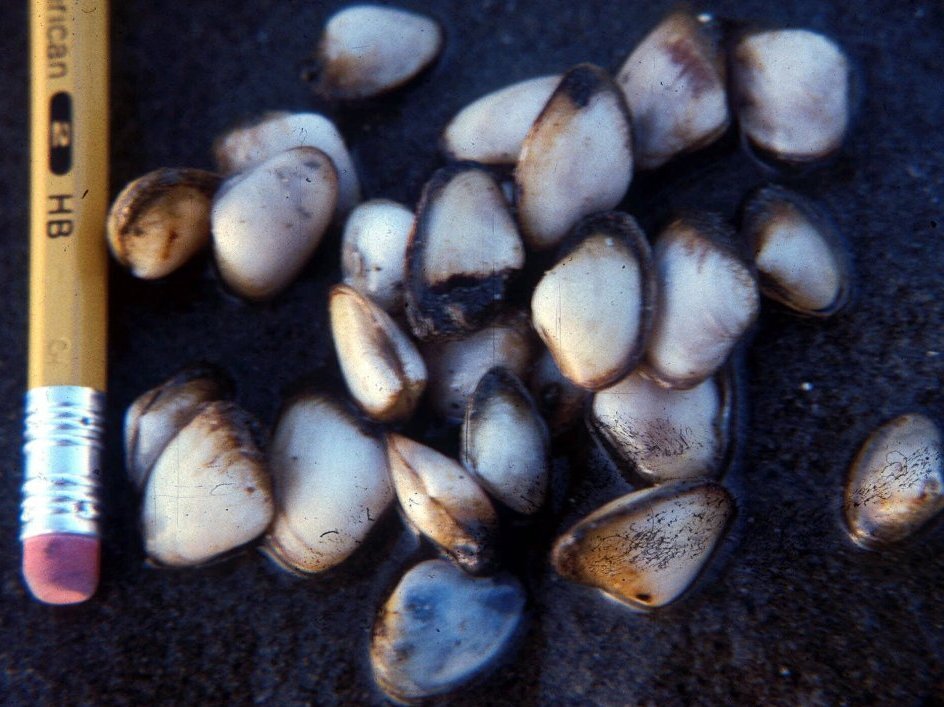 Several Asian clams are seen in this 1994 photo, after they were taken from San Francisco Bay. The Asian clam is one of hundreds of aquatic alien species that thrive in the Bay Area.

"Anytime I go out in the bay," he says, "there's a reasonable chance I'm gonna find something I've never seen in the bay before – something which no one has seen on the Pacific coast before. That's just astonishing."

Most of these invaders arrived as international hitchhikers. Ships that carry cargo on the open ocean have to balance their loads. So, Cohen explains, ships fill massive onboard ballast tanks by pumping seawater in at one port and pumping it out at the next.

"For a long time, people didn't think too much about this, 'cause it was just water, says Cohen. "But eventually, we found that we were moving virtually everything that lived in the sea."

Those transfers included parasites, which cause rashes, and the Asian clam, which altered the entire food web in San Francisco Bay. California has spent millions of dollars trying to get rid of the worst invasive species. But the state's efforts have rarely worked. The strategy has turned to prevention.

Inside the Golden Bear, a 500-foot ship at the California Maritime Academy in Vallejo, engineer Bill Davidson switches on the ballast pumps to test a new water treatment technology. The idea is to kill the organisms in the water before the ballast is released. The system has two steps: First, the ballast water is filtered. Next, chlorine is added.

Davidson says the chlorine is fed back into the ballast stream and "that will ideally oxidize or kill any live organisms."

The treatment system neutralizes the chlorine before it's released, which makes it inactive. But getting the system to work is trickier than it seems, because the organisms are very small.

In a lab on the ship, Julie Kuo of Moss Landing Marine Labs looks through a microscope at a tintinnid — a tiny, cone-shaped plankton. Kuo counts these organisms in water samples from the treatment process. She also checks to see if they're dead.

"If they're kind of sitting there and you don't know if they're alive or dead," she explains, "you poke them with a probe."

The treatment system is designed to meet international standards that limit the number of living organisms in ballast water. Right now those standards are voluntary. But California has adopted a rule that applies to all newly constructed ships, starting next January. The technology to reach this new standard isn't ready.

Nicole Dobroski is with the California agency overseeing the regulation. She says, "We recognize that that's a challenge, but there's a good reason we wanted it to be a challenge."

Dobroski acknowledges that none of the treatment systems being developed can consistently meet California's standards yet. Still, the state is moving ahead with the regulation.

Ships across the globe will also have to think out of the box. Almost half of all of the cargo brought into the U.S. in shipping containers comes in through California ports.