Accessibility links
Will Ferrell Plays It Straight In 'Everything Must Go' Will Ferrell has made his name playing grown men who can't quite grow up. His newest movie, Everything Must Go, takes what seems like a similar scenario — a man down on his luck moves all his belongings onto his front lawn — but manages to keep things dark. 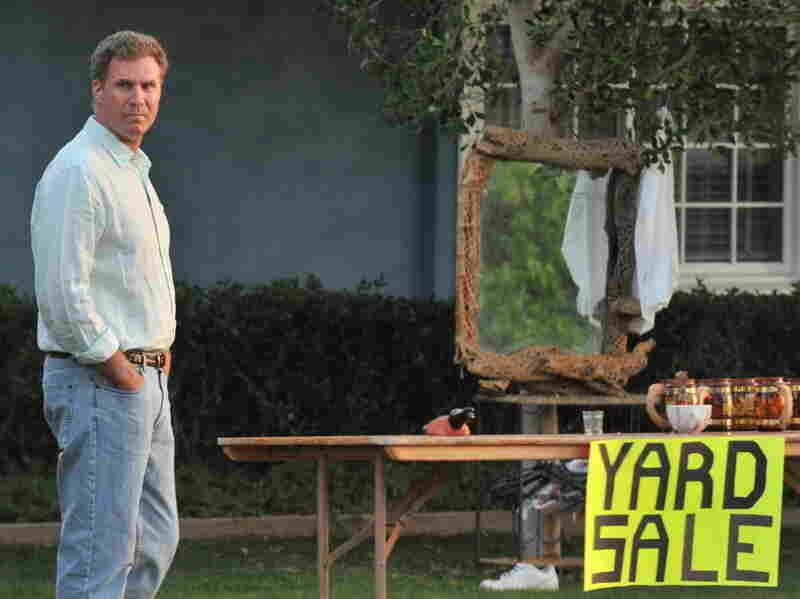 In the new drama Everything Must Go, Will Ferrell plays an alcoholic whose wife kicks him — and all of his belongings — out of the house. John Estes/Roadside Attractions hide caption 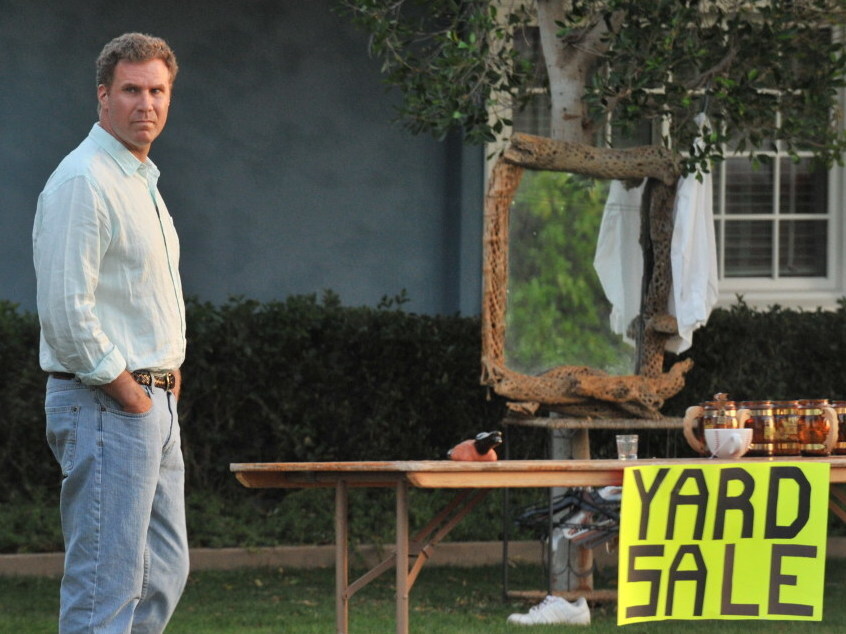 In the new drama Everything Must Go, Will Ferrell plays an alcoholic whose wife kicks him — and all of his belongings — out of the house.

From Ron Burgundy to Ricky Bobby to his famous George W. Bush impersonation, Will Ferrell is one of the funniest performers in America. His characters are often the butt of some joke — neither as smart, or as hip, as they think they are. That can't be said of Nick Halsey, the character he plays in his latest movie, Everything Must Go.

Halsey's is in a predicament, but one that's not played for laughs. He has been kicked out of his house by his wife, who has canceled his credit cards and even his cellphone service and deposited all his belongings on the front lawn — at which point Halsey makes a strange decision.

"Instead of fleeing, he decides to set up shop and arrange all of his personal effects in a way that it becomes basically a room for him to live in," Ferrell tells Morning Edition's Renee Montagne. "A mini-fridge, samurai sword collection — just all these various things, and he arranges them with a dresser drawer and everything and makes a home."

Based on a short story by Raymond Carver, Everything Must Go takes what could be a comic opening and goes darker than most of Ferrell's films.

Watch Clips From 'Everything Must Go'

"We find out he's had bouts with drinking, and that's actually one of the reasons he's let go from his job," Ferrell says. "But his AA sponsor comes and checks in on him and finds out that the police have said he has to leave his lawn unless he has a yard sale. That will give him an extra five days he can stay on his lawn. And so he's forced to have a yard sale to live out there. And that forces him to figure out if he's going to move on or just stay settled."

The film tracks Halsey's attempts to pick up the pieces of his life and make any sort of human connection. He walks across the street to try to get his new neighbor — played by Rebecca Hall — to join him for dinner. He hires a neighborhood boy — played by Christopher Jordan Wallace, the son of rapper Christopher Wallace, better known as Notorious B.I.G. — to help him tend his belongings.

When he played a nerdy cop in the 2010 film The Other Guys, Ferrell got his hair cut at a Supercuts in the San Fernando Valley. But in pushing himself toward the darker fringes of the more restrained character in Everything Must Go, Ferrell went further.

"Yeah, I really actually stayed alone for the entire filming. I didn't try to go out at all with the cast at any point. I also experimented one night, I got completely drunk and had a friend just tape me on a flip phone, just to see what sort of physical transformation I went through," Ferrell says. "What I found out was just that I'm a very happy drunk."

Fortunately, he has a history of forcing himself to wallow upon which to draw. Ferrell says that after his parents divorced when he was 8 years old, he would sit alone in the car while his mother shopped for groceries, listening to sad songs on the car radio in order to "purposely feel melancholy."

"I was able to think back to that," he says. "There was some song that used to come on as a kid, that if I hear it now it'll literally put me back to my '70s childhood and wishing my parents weren't divorced."

If his fans don't yet recognize that brand of melancholy as a Ferrell trademark, it may be because he has made his name playing men who can't quite grow up. 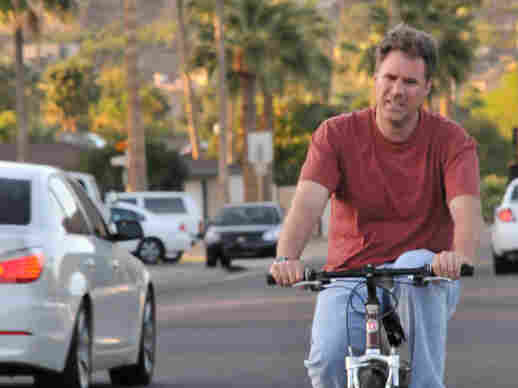 Will Ferrell in Everything Must Go, based on a short story by Raymond Carver, whose work was also adapted into the Robert Altman film Short Cuts. John Estes/Roadside Attractions hide caption 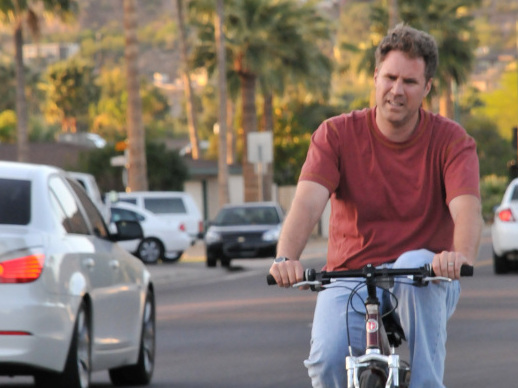 Will Ferrell in Everything Must Go, based on a short story by Raymond Carver, whose work was also adapted into the Robert Altman film Short Cuts.

"I always find it actually funny that the analysis is that the characters I play in comedies are the manchild, the adolescent, characters that refuse to grow up," he says. "And yet, if you look back in the history of comedy all the way back to the Marx brothers, that's a big part of comedy. No one ever criticized the Marx brothers and said, 'I wish they would grow up and stop banging each other on the head.'

"I think it's natural to want to evolve throughout a career, and getting to do a movie like this is not a conscious effort to put that ball in motion; it was just an opportunity to do something different and to show that, as far as I believe, that I have this ability to give a fairly straight dramatic performance. Although there are definitely funny moments, this is probably the most real — quote unquote — thing I've ever done."

Out in the real world, though, the one character he can't shake is definitely a Ferrel trademark — a grown man who hasn't yet grown up — and perhaps the most fantastical role he has ever played.

"Obviously around Christmastime there's a lot of people coming up saying, 'We just watched Elf,' " Ferrell says, "which is so crazy to me because I just remember running around in a pair of tights in New York City thinking, 'Oh, this could be the end of my career. Either this is going to be a really big movie or people are going: Why did he do that? What was he thinking?' "