Accessibility links
Risky Rescue: Saving Pets From Japan Exclusion Zone Tens of thousands of pets are homeless following the disaster in Japan. Many have been taken in by animal rescue groups — some rescuers have even sneaked into the nuclear exclusion zone to remove animals. Despite the risk of radiation, "we have to do this because dogs are dying," one rescuer says. 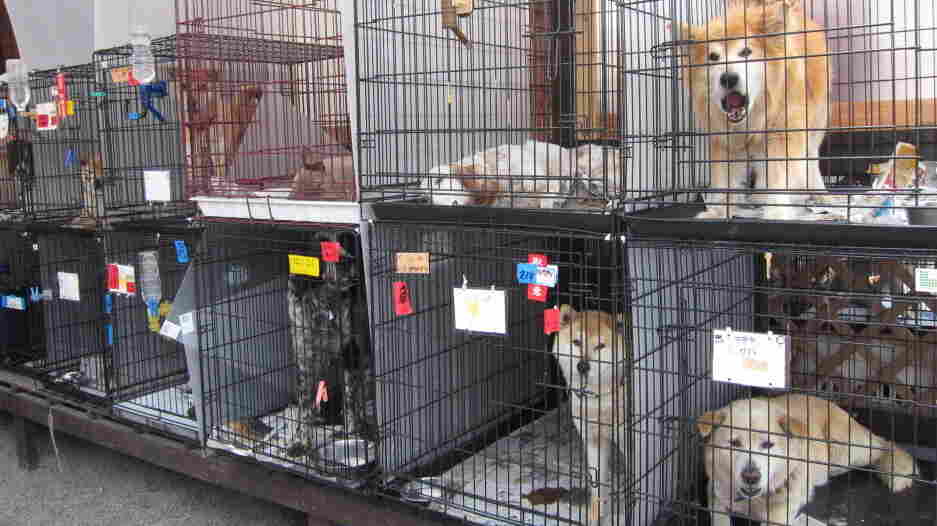 The Japan Animal Rescue shelter in Samukawa houses about 200 dogs and cats, most of them brought in from the now off-limits area around the Fukushima Dai-ichi nuclear power plant. Brian Naylor/NPR hide caption

Many have been taken in by animal rescue groups — some of which sneaked into the exclusion zone surrounding the crippled Fukushima Dai-ichi nuclear power plant to remove animals found wandering the streets and houses.

The Japan Animal Rescue shelter in Samukawa — about a two-hour train ride from Tokyo through congested suburbs — is the new home of some 200 dogs and cats. Most of them are from the now off-limits towns around the power plant.

Sugano Hoso, who runs the shelter with her husband, has taken part in several clandestine and dangerous trips into the exclusion zone to rescue the animals.

"Of course there is the issue of radiation going in there and also lots of police guarding the place, so we really had to try hard to get through that," Hoso says. "But we have to do this because dogs are dying every second, every minute."

This is one of numerous shelters throughout Japan where pets have been brought from the exclusion zone, as well as from the many towns destroyed by the tsunami. Most evacuation centers do not allow dogs and cats, so until people are either allowed back into their old homes or set up in new temporary ones, their pets will stay in places like this.

Hoso says providing shelter for the pets is more than just a job.

Japan Struggles With How To Heal 'Children's Hearts'

Rebuilding A Soy Sauce Company, From The Barrel Up

"It's like a mission," she says. "And as a human being — since people have been evacuated from there, why do these dogs have to be left there? So it's very natural for us to go there and rescue them."

In the shelter, the dogs are living in typical pet crates, stacked three or four high. Most are smaller mixed breeds, along with a few spaniels and even a Saint Bernard whose owner asked the center to rescue it.

Yukie Otake, a veterinarian volunteering her services to care for the animals, says many are hungry and under stress.

"When they arrive here, they are more violent — to protect themselves. But after some days, their stress goes away and they are fed all right and they start understanding this is a safe place," Otake says. "Then finally they let us touch them or walk with them."

The dogs from the exclusion zone are immediately washed, and their radiation levels measured. Volunteers sympathetic to the animals' plight have been streaming in to help out. Some are walking the dogs.

Mee Nori Iwasaki stopped by with a delivery of dog food and big towels.

"I got very sad to see pictures of dogs on TV, and we have our dogs as well, and so that made me so sad to see," Iwasaki says. "That's why we are here today."

The owners of the Japan Animal Rescue shelter say it's their philosophy that humans and dogs should be treated as equally as possible. But even they concede that some two months after the earthquake, it's already too late for many pets left behind.