Accessibility links
Scientists: New Branch On The Tree Of Life Scientists thought they had described all major types of fungi, from mushrooms to mold. But a newly discovered fungus-like group of microscopic organisms defies classification, and may belong in its own kingdom. 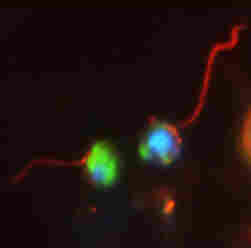 Two cells — one marked mostly in green, the other in blue — of a newly discovered organism found in water samples collected from the University of Exeter pond. Scientists think these "cryptomycota" use their tails to propel themselves while searching for food. Meredith Jones/Nature hide caption

If you think biologists have a pretty good idea about what lives on the Earth, think again. Scientists say they have just now discovered an entirely new branch on the tree of life. It's made up of mysterious microscopic organisms. They're related to fungus, but they are so different, you could argue that they deserve their very own kingdom, alongside plants and animals.

This comes as a big surprise. Just a few years ago, professor Timothy James and his colleagues sat down and wrote the definitive scientific paper to describe the fungal tree of life.

"We thought we knew what about the major groups that existed," says James, who is curator of fungus at the University of Michigan. "Many groups have excellent drawings of these fungi from the last 150 years."

Many fungi are already familiar. There are mushrooms, yeasts, molds like the one that makes penicillin, plant diseases such as rusts and smuts. Mildew in your shower is one, along with athlete's foot. There are even fungi that infect insects — as well as fungi that live on other fungi.

Biologists figure they've probably only cataloged about 10 percent of all fungal species. But they thought they at least knew all of the major groups.

Oops. A paper being published in the journal Nature says that isn't so. Thomas Richards, at the Natural History Museum in London, says biologists can mostly only study microscopic fungi if they can grow them in the lab.

"But the reality is most of the diversity of life we can't grow in a laboratory. It exists in the environment," he says.

And microscopic organisms are just about impossible to find just looking at dirt or water through a microscope. So Richards and his colleagues tried more modern means.

"About 10 years ago, people started using molecular approaches," he says. "So they started targeting the DNA in the environment, specifically."

Using those techniques, they struck pay dirt. They found novel bits of DNA — related to fungi, but clearly different from all of the known varieties — just about everywhere, "including pond water, lake water, freshwater sediments and marine sediments," Richards says. "Almost everywhere we looked we found this novel group."

They then brought samples back to the lab and devised a technique to make the organisms containing this novel DNA glow under a microscope. As a result, they've managed to get a few glimpses of these mysterious life forms, which they have named cryptomycota.

"We know they have at least three stages to their life cycle," Richards says. "One is where they attach to a host, which are photosynthetic algae. Another stage ... they form swimming tails so they can presumably find food. And [there's] another stage, which we call the cyst phase, where they go to sleep."

Now, Richards and his colleagues would like to figure out how to grow them in the lab to really get to know them.

"At the moment it's a bit too early to be sure about what role they play in the environment," he says. "But one thing we can be certain of is because they're so diverse, they're probably playing many, many different roles in many different environments."

Back at the University of Michigan, Tim James says the discovery is revolutionary. It's rocking the world of fungus phylogenetics.

"It's going to be interesting because one of the controversies is going to be, are they really fungi or not?" he says.

Because they apparently lack a protein in their cell walls that is a defining feature of fungi, you could argue that they aren't actually a member of the fungus kingdom but deserve an entire kingdom of their own. And before you get too comfortable with the idea that all of these species just hang out in ponds or sediments, James adds, "there could be some human parasites in here eventually discovered."

But fret not. Mostly, fungi are doing important things, like recycling nutrients. And most of the time, they seem to leave us alone.