Accessibility links
Foreign Policy: Next, Let's Get Bin Laden's Financiers The killing of Osama bin Laden has prompted many questions about the future of al-quaida. Matthew Levitt of Foreign Policy argues that the most important part of taking down the organization has become locating and neutralizing its financial backers. 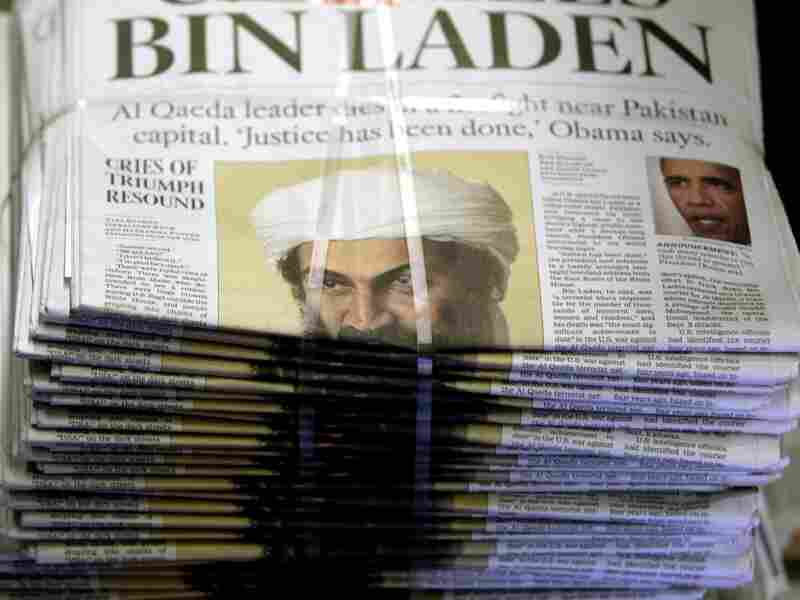 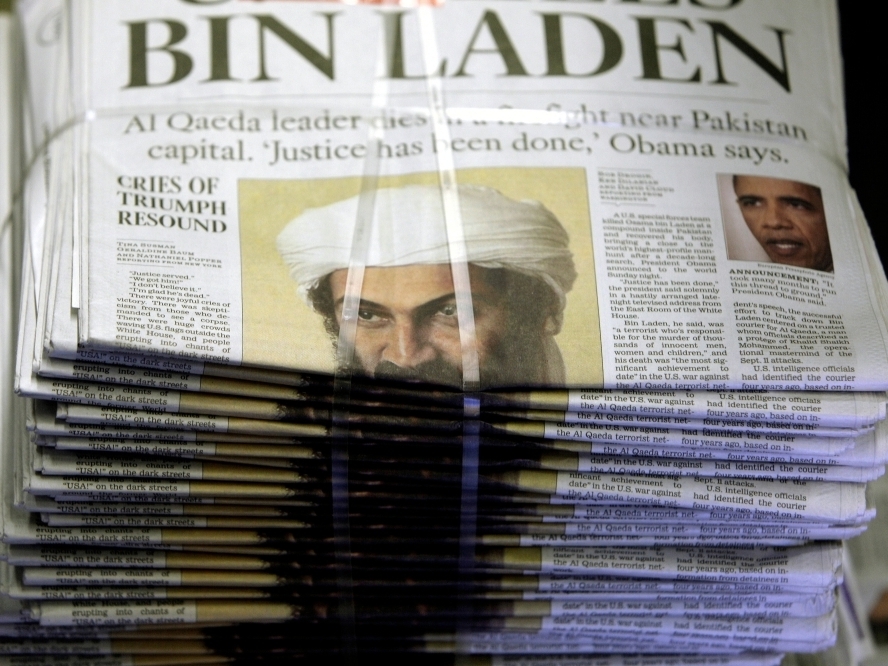 A bundle of Los Angeles Times newspapers reads: "Justice has been done," with a photo of Osama bin Laden. The Sept. 11 mastermind was killed last week.

Matthew Levitt, former deputy assistant secretary for intelligence and analysis at the U.S. Treasury Department, directs the Stein Program on Counterterrorism and Intelligence at the Washington Institute for Near East Policy and teaches at the Johns Hopkins University.

Terrorist financiers must be under tremendous stress since news broke that U.S. Navy SEALs killed Osama bin Laden and seized hard drives and other electronic media from his safe house. Intelligence analysts and document exploitation ("Doc X") specialists are reportedly already sifting through this intelligence treasure trove and have found evidence of notional al-Qaida plots, including aspirational plans to attack the U.S. train system, and more. In all likelihood, the files will include clues pointing to bin Laden's money trail as well.

This puts people like Abd al-Hamid al-Mujil in an uncomfortable position. Described by fellow jihadists as the "million-dollar man" for his successful fundraising on behalf of al-Qaida and other jihadi groups, Mujil directed the office of the International Islamic Relief Organization (IIRO), a charity in the Eastern Province of Saudi Arabia. Both he and the IIRO office he headed were designated as terrorist entities by the U.S. Treasury Department in 2006.

But even if being "named and shamed" forced Mujil out of the terror-finance business, there are many others just like him. Just this week, David Cohen, the head of the Treasury Department's Terrorism and Financial Intelligence branch told CNN that major donors from the Gulf states remain the key sources of funding for the al-Qaida core. There are no doubt dozens of radical funders now worrying that their names, bank accounts, or addresses will comes up in bin Laden's spreadsheets — or "pocket litter" — and for good reason.

It would not be the first time authorities have recovered revealing documents about al-Qaida's finances in a raid. In March 2002, Bosnian authorities raided the Sarajevo offices of the Benevolence International Foundation, a charity designated by the Treasury Department as an al-Qaida front. Among the material found on the seized computers was an al-Qaida memorandum from 1988 or 1989 listing 20 Saudi financial backers described by bin Laden as the "Golden Chain," so named because they were a reliable source of funding for his organization. According to the Sept. 11 Commission report, the Golden Chain was put together mainly by bin Laden's financial backers in Saudi Arabia and other Gulf states.

But even if the files seized in bin Laden's Abbottabad safe house do not include explicit references to the next "million-dollar man" or "golden chain," they will likely contain information that could help expose the money trail sustaining the al-Qaida core. First, they may point to who covered bin Laden's personal expenses, which could have added up quickly. Think of the 500 euros sown into his clothes, the costs of feeding his 18-person entourage, the salaries of his bodyguards and couriers, the expense of building and renovating his compound, and the cash that may have been needed to bribe Pakistani authorities not to look too closely at his fortified three-story villa. The files may even reveal information about the current balance sheets of al-Qaida, which, as of October 2009, was said to be "in its weakest financial condition in several years."

Even then, though, U.S. authorities were quick to add they were not "taking any victory laps," because there were still likely new donors willing to step in. At the time, Cohen warned that the international community's success in disrupting al-Qaida's finances might only be temporary, because "we have not yet dissuaded nearly enough donors from wanting to give in the first place." News of the Abbottabad raid alone may dissuade many of those donors in the near term, and the intelligence windfall from the raid may lead to more tangible disruptions of some donor channels. That could place the al-Qaida core under still further financial strain, but it would have little if any impact on the funding of key al-Qaida franchises such as al-Qaida in the Arabian Peninsula (AQAP), affiliated groups like Lashkar-e-Taiba, foreign-directed al-Qaida networks like those recently arrested in Germany, or the homegrown violent extremists like Maj. Nidal Hassan, who present the most immediate terrorist threats to the United States and its allies.

Whereas al-Qaida directly funded and controlled operations from its base in Afghanistan before the 9/11 attacks, today al-Qaida franchises and homegrown extremists are self-financed. We know that al-Qaida provided funding for the East Africa embassy bombings in 1998, the 2000 attack on the USS Cole in Yemen, and the 2001 World Trade Center attacks. Even after Sept. 11, al-Qaida continued to provide money for operations, such as the $20,000 it furnished for the 2002 Bali bombings.

The terrorist threat is far more decentralized today, and al-Qaida's central command is not funding operations as it once did. To help finance the Bali bombings, Jemaah Islamiyah operatives had to resort to robbing jewelry stores because the al-Qaida core's contribution was not enough to foot the bill. Al-Qaida in the Islamic Maghreb (AQIM), the group's North African branch, raises significant funds through kidnapping and other types of organized crime. AQAP, now based in Yemen, has worked hard to develop its own network of major donors. For example, in September 2009, Saudi security forces found a video clip of AQAP leader and former Guantanamo detainee Saeed al-Shihri making a pitch for money to help "jihad to keep going," calling the need for funding "the core of life and the core jihad."

Left to their own devices, budding terrorist cells have resorted to criminal activity to raise funds for attacks or have used personal funds or government welfare benefits. Some of these cells, such as the terrorists who carried out the July 7, 2005, attacks on the transportation system in London, may have connections to al-Qaida's senior leadership but are independently and locally funded. In that case, while several members of the cell traveled to Pakistan for training and met up with al-Qaida, they were on their own when it came to the funding for the attack. One cell member provided the majority of the money, defaulting on a 10,000-pound personal loan and overdrawing from his multiple bank accounts. The cell also obtained funding through credit card fraud. In the end, British investigators found "no evidence of external sources of income" and stressed that the group raised the necessary funds by "methods that would be extremely difficult to identify as related to terrorism or other serious criminality." The cell that executed the devastating 2004 Madrid train bombing is another good example, partially financing the attack by selling hashish.

A rare exception to this new pattern was the 2007 "Dagger" case in Copenhagen, in which the alleged perpetrator, Hamad Khurshid, reportedly received $5,000 from al-Qaida core to conduct a bombing attack in Copenhagen.

Increasingly, however, terrorism watchers see the money going the other way. In Spain, for example, authorities have seen Pakistani jihadists not only finance their local activities through petty crime, such as money laundering and credit card fraud, but also send millions of dollars back home — some of which, it is suspected, finances extremist groups there. In Singapore, a self-radicalized cell leader collected contributions from fellow cell members with the intent of sending the money to support violent causes abroad.

In other cases, terrorist recruits are often being asked to bring funds with them to cover their expenses. For example, in January 2008, five members of a Bahrain-based cell were convicted of terrorist activities, including receiving explosives and weapons training, engaging in terrorism overseas, and financing terrorism. According to Bahraini officials, one of the individuals acknowledged having traveled to Afghanistan to engage in combat against coalition forces, and several members of the cell traveled from the kingdom to Afghanistan via Iran. Two of the suspects admitted bringing funds to cover their expenses (one cell member provided 3,000 euros and 1,000 dinars, while a second gave thousands of dinars to his handler). In another case in December 2008, Belgian and French counterterrorism authorities arrested 14 individuals with ties to core al-Qaida, some of whom had visited Pakistan's tribal areas and had been instructed to bring 2,400 euros with them to pay their travel and training costs.

At times, al-Qaida has explicitly asked its affiliates for financial support. In 2005, bin Laden's deputy, Ayman al-Zawahiri, sent a letter to Abu Musab al-Zarqawi, then the head of al-Qaida in Iraq. In the letter, which was intercepted by the U.S. government and subsequently declassified, Zawahiri asked Zarqawi for 100,000 (without specifying a currency), noting that "many lines [of support] had been cut off."

More recently, al-Qaida has received assistance from Lashkar e-Taiba (LeT), its powerful and dangerous affiliate in South Asia. In July 2009, the U.S. Treasury Department designated Arif Qasmani, whom it described as the "chief coordinator" for the group's dealings with other terrorist organizations. According to Treasury, Qasmani has provided a wide variety of financial and other support to al-Qaida since 2001, including facilitating al-Qaida members' travel and providing supplies and weapons. In exchange, al-Qaida provided Qasmani with operatives that helped LeT carry out the 2006 train bombing in Mumbai, India, and the 2007 attack on the Samjhauta Express in Panipat, India.

The Abbottabad files may help analysts better understand the current nature of the financial relationship, if any, between al-Qaida core and its regional franchises. And beyond the files themselves, bin Laden's killing may also have an impact. For example, if fissures break out between Zawahiri and other al-Qaida leaders, freelance fundraisers who have raised funds for both the al-Qaida core and affiliated groups could shift away from Zawahiri and toward groups like AQAP, which U.S. authorities unanimously describe as the greatest terrorist threat to the United States today. Consider someone like Mubarak al-Bathali, a Kuwaiti designated a terrorist financier by the United States in December 2006 and by the United Nations in January 2008. According to the Treasury Department, Bathali raised funds in Kuwait for a range of terrorist organizations — including al-Qaida, Ansar al-Islam, and Lashkar-e-Taiba.

Al-Qaida's late leader may still bring in the big bucks for a while, as his old videos get passed around like "greatest hits." But while bin Laden served as a unifying figurehead, Zawahiri is a divisive figure whose presumed accession to the top spot in the al-Qaida hierarchy may well rekindle simmering tensions between the organization's Egyptian and Yemeni factions. Moreover, the al-Qaida core — lacking the power of the purse and stripped of its founding icon — may find itself less able to exert authority over its self-financed franchises. The death of bin Laden does not mark the end of al-Qaida, but it may mark the beginning of the end of its core — and the rise al-Qaida affiliates and homegrown violent extremists.