Accessibility links
For-Profit Colleges: Targeting People Who Can't Pay The for-profit college industry has grown substantially in the past decade by targeting underprivileged students who qualify for federal loans, investigative journalist Daniel Golden says. But he says many of these students aren't getting what they hoped for out of college. 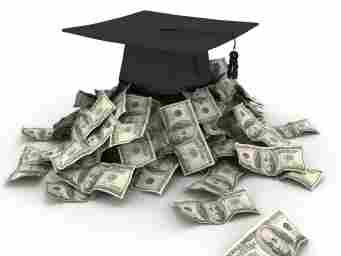 On Thursday's Fresh Air, Golden explains how the for-profit college industry has grown substantially in the past decade by targeting underprivileged students who qualify for federal loans. Many of these students drop out before graduating or can't find the types of jobs that will allow them to repay their loans, leaving them with staggering debt.

"Because the tuitions are high and they've had to borrow to pay the tuition, they're laden with debt and often they can't find a good enough job to be able to pay that debt off," he says. "And because these student loans can't be discharged even in bankruptcy, they follow these former students throughout life. ... It can be a lifelong drag on people who already are struggling."

Golden is an editor-at-large for Bloomberg News. He shared the George Polk Award for educational reporting for a series on the for-profit college industry. In 2004, he received the Pulitzer Prize for Beat Reporting for his series on college admissions and preferential treatment for The Wall Street Journal. He is also the author of The Price of Admission: How America's Ruling Class Buys Its Way into Elite Colleges — and Who Gets Left Outside the Gates.

"Until recently, most of these schools were paying their recruiters based on how many people would sign up. It's known as incentive compensation. So the recruiters had a motivation to sign up anybody they could and that's what they were doing. Incentive compensation in college recruiting was actually banned in 1992, but in 2002 the Bush administration put through a series of loopholes and the companies used those loopholes to get around the ban and pay their recruiters per head. ... The Obama administration has sought to rein this in and has essentially gotten rid of those loopholes."

On the target population of for-profit colleges

On whether recruiters were honest with potential students

"The evidence seems to suggest that recruiters who were paid on the basis of how many students they would sign up did not necessarily provide a balanced picture of the pluses and minuses and didn't also necessarily give people enough time to make a thorough assessment for themselves. Often you're dealing with people whose families do not include college graduates and do not have a lot of sophistication about the system and may just have seen an ad on a website or a late-night television program, called up on a whim and got themselves signed up for federal student loans almost before they knew what happened. That doesn't absolve them totally of responsibility, but it suggests that the colleges have a responsibility, too."

On regulation in Congress

"There has been a lot of battling over this particular regulation. There was an effort in Congress by supporters of for-profit colleges to essentially defund that rule that could have cut off some of the access to financial aid for some of the schools. That didn't pass — the effort to defund it — so I think the regulation looks like it will be taking effect at some point. But for-profit colleges have a lot of allies in Congress. It's another parallel in a way to the subprime [mortgage crisis] in a sense that they're a little bit like Fannie Mae and Freddie Mac, where the for-profit colleges, because they're Wall Street companies ... have a lot of sympathizers among Republican supporters of free enterprise and big business. And because they serve low-income families, they have quite a few allies among Democrats who know that a lot of their constituents go there."