Accessibility links
Divining Doomsday: An Old Practice With New Tricks Convinced that May 21 will mark the world's end, believers continue to warn of God's ensuing wrath. But they aren't alone: End times prophecies have existed for centuries, and today, they're on the rise, examining whether world events — from earthquakes to economic globalization — are signs of the coming Apocalypse. 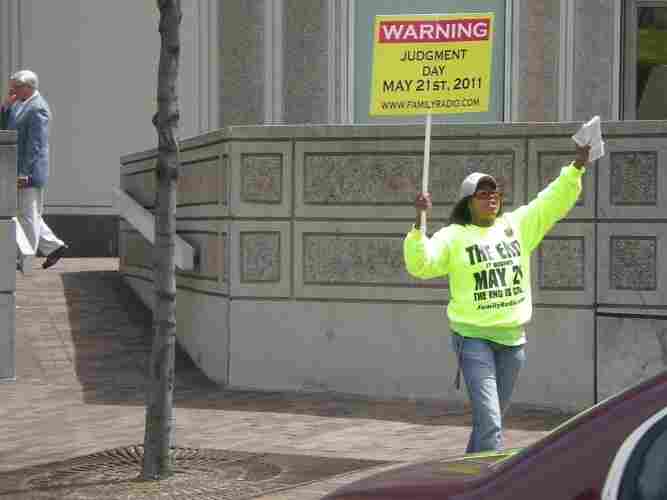 Margaret Pease stands on a corner in downtown Pittsburgh, handing out doomsday pamphlets.

For the past seven months, Pease has been crisscrossing the country in a caravan with eight others, warning anyone who will listen that God's wrath is near.

"I might be a little loud, but I want people to get the message," she says. "I don't want anybody's blood on my hands. ... JUDGMENT DAY FOLKS!"

Nearby, David Liquori is telling passerby Thomas Sayers what he thinks will happen in just a few days.

"On May 21 at about 6 p.m., an earthquake of proportions which have never been known since man was on the Earth will occur," Liquori says.

"Oh, this is going to be awesome!" Sayers says. "Where's it going to happen?" 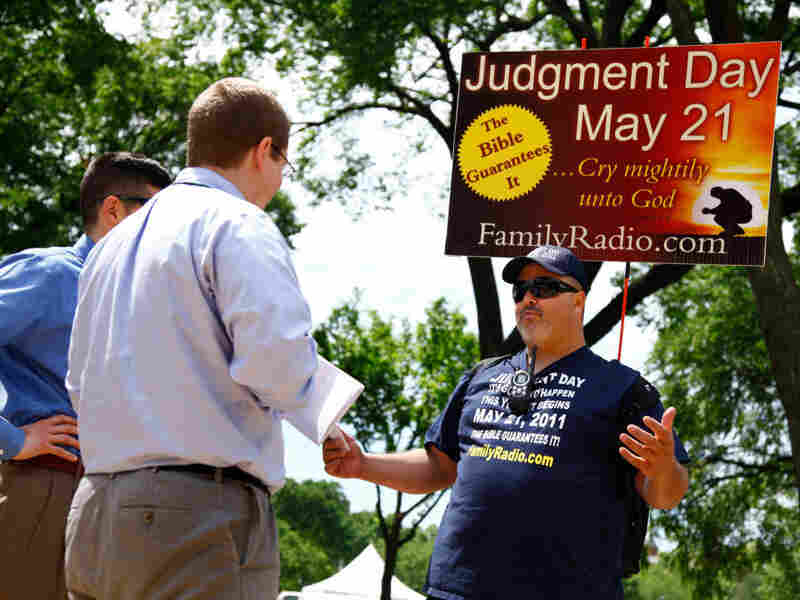 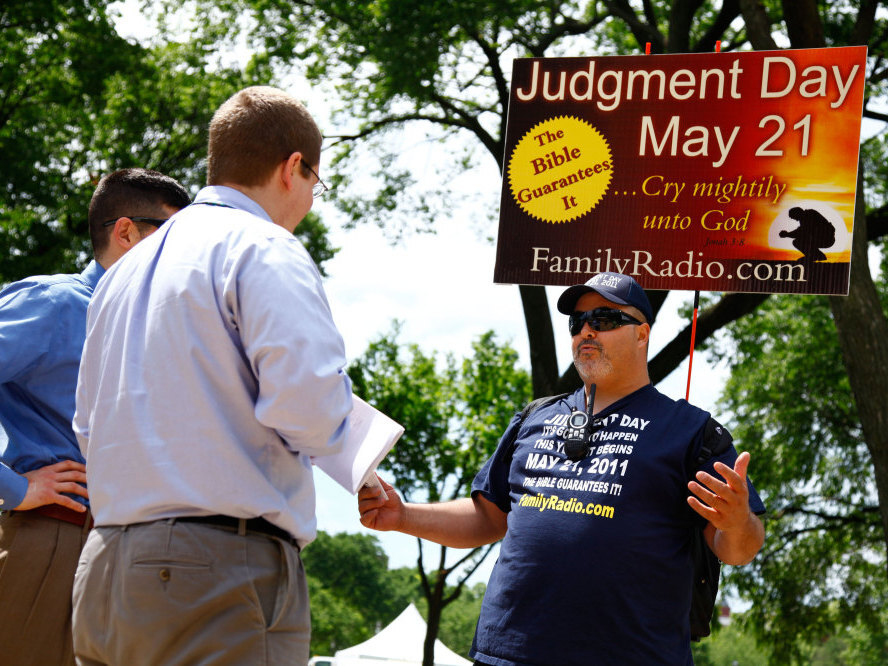 On the National Mall in Washington, D.C. last week, David Liquori (right) talks with passersby about May 21.

"I kind of feel bad for them because they do believe the world will end the 21st," he says. "As a Christian, I also believe there's a certain date that nobody knows. I'm on the same journey they are — they just think it ends the 21st and I don't think it does."

But like many people interviewed for this story, Liquori has bet everything on this date.

"I'm separated as a result of a difference of belief," he says. "My wife got sick of me."

He used to have a job and owned a house on Long Island.

"I have sold everything off," Liquori says. "I have no more personal ambitions but to get the Gospel out to warn the world."

Liquori and others believe that a very small fraction of Christian believers will fly up to heaven on that fateful day. Then on Oct. 21, the Earth and the universe will be destroyed.

But what about those who are left on Earth for those five months?

"Oh, it will be a horror story beyond measure," says Harold Camping, the man who calculated the May 21 date.

He has long been predicting the end on his international Christian radio network, Family Radio — which in 2009 was worth more than $100 million. Camping says the Bible is written in a code, and for those who are able to decipher it, it's clear as daylight.

"With all the proofs that God has given us, and all the signs, I am absolutely certain [that Judgment Day will arrive on May 21]. It is going to happen. There is no Plan B."

Of course, even Jesus said he didn't know when Judgment Day would come. But Camping is not bothered by that, nor by the fact that he wrongly predicted Judgment Day once before, in 1994.

"It was based on incomplete research and I was quite aware that the research was incomplete," he says. "So it was just like a first announcement that we're almost there."

So far, end time predictors have batted zero. The most famous was William Miller, a Baptist minister who believed that Jesus would return in the early 1840s. According to Catherine Wessinger, a historian of religion at Loyola University, New Orleans, on the night of Oct. 22, 1844, believers gathered on hilltops to watch Jesus return.

"People stayed up all night, they waited," Wessinger says. "Some people allegedly put on white robes, waiting to go up to heaven, and were very disappointed when the sun rose the next morning and nothing had happened."

It was deemed the Great Disappointment.

"People have been predicting the end of the world in Christianity since the time of St. Paul," says Cathy Gutierrez, a religion professor at Sweet Briar College.

She says usually end times prophets do not predict a specific date. That's way too risky. But she says the predictions have come fast and thick in the past 60 years, largely because of one event in 1948: the creation of the state of Israel.

"Almost all of the prophecies of the Bible depend upon Israel being in her land," says David Jeremiah, an evangelical pastor and author of The Coming Economic Armaggedon. "And when she finally became a nation and the people of Israel began to regather, that sort of started the prophetic clock."

Prediction: When Easter falls on April 25

Easter has been on April 25 four times since the famous mystic's 16th century prediction and will once again fall on that date in 2038.

Based in Seoul, South Korea, and led by the Rev. Lee Jang Rim, the Tami "Mission for the Coming Days" supported the prophecy that the rapture would occur Oct. 28, 1992. About 20,000 members of the church spent the day waiting for the event.

In 1992, Camping — the president of Family Radio, a U.S. network of Christian stations — began predicting the 1994 date as Judgment Day. He wrote a book about the notion titled 1994.

The Maya long-count calendar ends on this December 2012 date, when translated into our Gregorian calendar system. Researchers of 2012 differ in their explanation of the calendar's end: Some see it as a sign of the world's destruction; others as merely a sign of its renewal.

Israel's birth has created a booming end times industry. Dr. Jimmy DeYoung, who hosts the radio program Prophecy Today, scrutinizes every development in the Middle East — and says it's all predicted in the Bible.

"You talk about the Jews' return to the land," he says in rapid-fire speech. "The alignment of the nations coming against the Jewish state of Israel, this anticipation of peace, the arrangements to put [Solomon's] temple up. The fact is, everything is unfolding. Never in the history of the world have all these prophecies been coming together."

DeYoung says everything is in place for the next big event: the rapture, when believers go to heaven and the rest are left behind. The rapture is a relatively new idea, and has been made hugely popular by movies and books like Left Behind.

Some 41 percent of Americans believe Jesus will return by the year 2050, according to a poll by The Pew Research Center.

For many of these believers, news events can take on an apocalyptic meaning. A global economy? The rise of the European Union? It's all outlined in the Bible, they say. A spate of wars in the Middle East? Ditto. Epidemics, extreme weather patterns. Open your Bible and turn on the news.

"We've always had earthquakes, we've always had storms, and we've had tsunamis in the past," says the Rev. David Jeremiah, "but it does seem that these things are happening with more intensity and more frequently."

Gutierrez says this convergence is less about the end of the world and more about the rise of instant media.

"If you're looking for signs of the end, we are more than capable of delivering them directly to your computer or to your television within seconds," she says.

Gutierrez says most of the Bible's prophetic books were written metaphorically to avoid censorship. And because of that, each generation can revive and reinterpret them. She adds that for end times Christians, looking through a biblical lens can give chaotic world events — the tsunami in Japan, the fighting in Libya — a meaningful pattern. Things happen for a reason, and all history marches toward a fitting denouement.

"And it's going to come to a definitive clear end — good guys win, bad guys lose," she says. "It's the most comforting novelistic plot that we know."

And for that reason, Gutierrez says, there will always be people predicting the triumph of God, and the fall of unbelievers.