Accessibility links
Egypt Eyes Neighbors Anew After Mubarak's Ouster Egypt's international allies have noticed signs that old agreements may no longer hold. While nothing is certain, Egypt's stance toward Israel and the Palestinians seems likely to shift most dramatically. There are indications "it won't be an easy ride for Israel anymore," an analyst says. 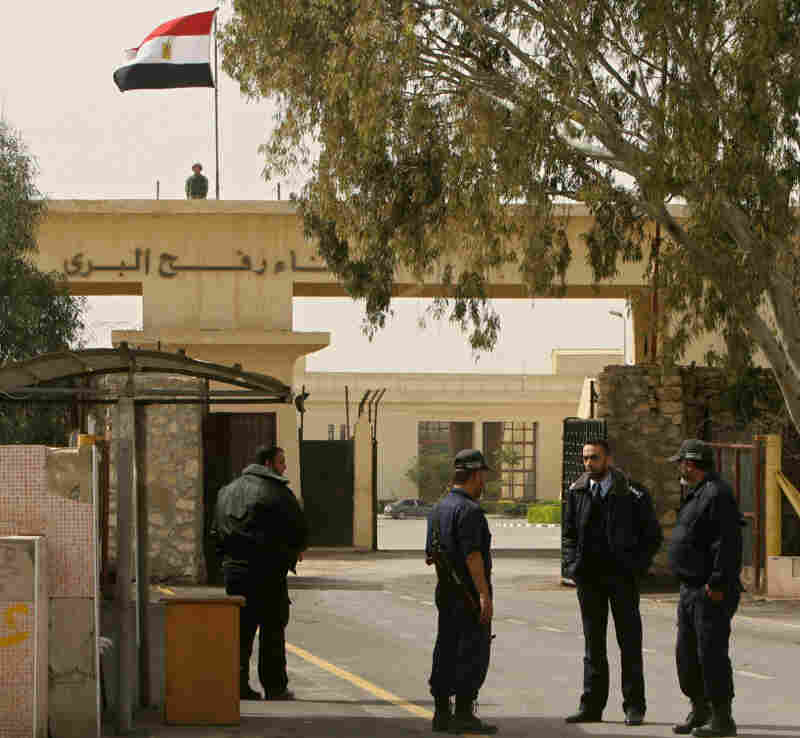 An Egyptian soldier (top) keeps watch on the Egyptian side of the Rafah border crossing as Hamas policemen stand guard on the Palestinian side. Egypt announced on April 29 that it would permanently open the Rafah crossing into the Gaza Strip. Said Khatib/AFP/Getty Images hide caption 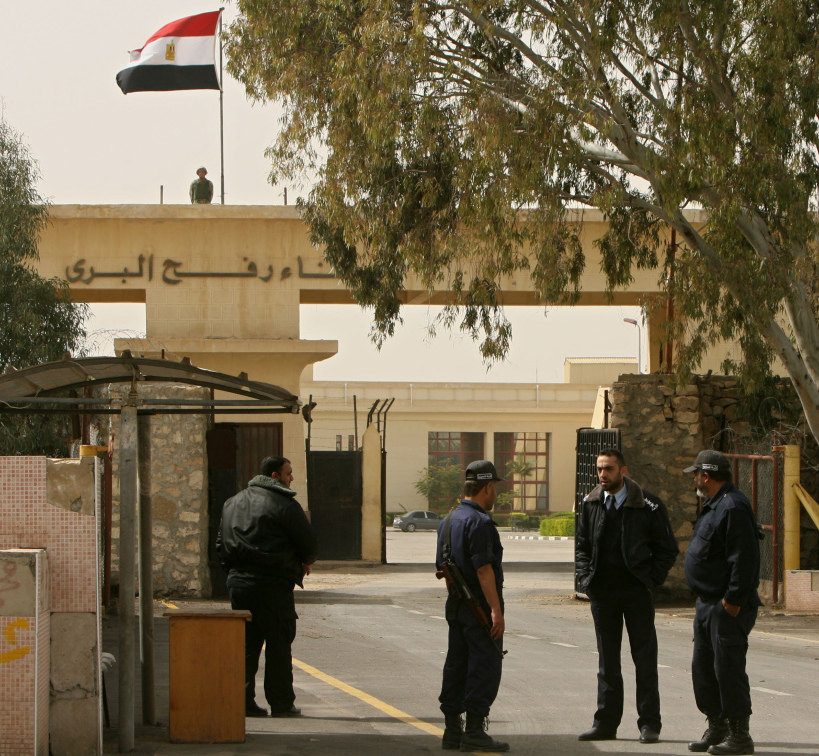 An Egyptian soldier (top) keeps watch on the Egyptian side of the Rafah border crossing as Hamas policemen stand guard on the Palestinian side. Egypt announced on April 29 that it would permanently open the Rafah crossing into the Gaza Strip.

In Egypt, no one seems ready to predict what the government will look like after this fall's election. But there's no shortage of fears about what might happen now that Hosni Mubarak's iron control is lifted.

Egypt's international allies have noticed — with some unease — signs that old agreements and assumptions may no longer hold.

From friendlier signals toward Iran to chillier moves toward Israel, Cairo is showing signs of independence not seen under Mubarak. While nothing is certain, neighboring Israel seems the most likely to feel the changes of a new Egyptian foreign policy.

There are many reasons Egyptians grew sick of the strong ruling hand of Mubarak, but few aroused more public disgust than Egypt's assistance in the Israeli siege of the Gaza Strip.

In 2008, during one of the periodic humanitarian crises Gazans were enduring, Egyptian truck driver Rafat Imam put it this way: "It's shameful what's happening over there. Egypt has in its power to do many things, many things to help. The first thing it has to do is to open the border and allow the wounded to get medical treatment. That's the least they can do."

Analyst Emad Gad at the Al-Ahram Center for Political and Strategic Studies says that today, Egypt's foreign policy is necessarily in flux along with the rest of the country. But he says one thing that's very likely to change is what he calls Mubarak's bargain with the U.S. and Israel.

"We can say that he sold the Egyptian foreign policy for Israel and the United States," Gad says. "They must let him do what he wants inside Egypt; in the same time, he will do what they want regionally."

There are a number of other potential changes for Egypt's worldview. Shiite-led Iran says it will send an envoy to discuss repairing long-frozen relations with Cairo, setting off alarm bells in Saudi Arabia and other Sunni-run Arab capitals.

Even on the sacred subject of Nile river water, which Egypt has long held as a birthright, there are new shows of cooperation with upriver states like Ethiopia.

But it's Egypt's stance toward Israel and the Palestinians that seems likely to shift most dramatically. In Israel's conservative Jerusalem Post, Mubarak has been hailed as a "valued partner" who did much more for Israel than he got credit for. Chief among those accomplishments, both supporters and critics say, was acting, in effect, as Israel's agent by keeping the Gaza-Egypt border closed most of the time.

Many people in Egypt believe that the surprise reconciliation pact between the Palestinian Fatah and Hamas movements would not have been possible unless the Hamas leadership felt confident that it would now have a much easier time getting people and goods across the border.

Issandr El Amrani, a writer and analyst who contributes to the blog The Arabist, wrote recently that under Mubarak, Egypt's policy toward Israel was not only "morally abject and unpopular, it was also bumbling and incompetent." Now, he says, Egyptians will demand a new approach.

"We've seen signs, certainly from the potential presidential candidates that are showing up so far, that it won't be an easy ride for Israel anymore, that the government of Egypt will no longer stay silent when Israel acts the way it did in 2006 in the war in Lebanon, or in 2009 in the war in Gaza."

We've seen signs ... that it won't be an easy ride for Israel anymore, that the government of Egypt will no longer stay silent when Israel acts the way it did in 2006 in the war in Lebanon, or in 2009 in the war in Gaza.

'An Adjustment' For Israel

The potential for change in Egypt's foreign policy is attracting interest around the region. In Turkey — another country struggling to grasp the changes rippling through the Arab world — international relations analyst Soli Ozel says it's a shift that will take some getting used to, although radical changes are unlikely.

"I don't think the Egyptians, no matter who comes to power, are going to be interested in waging war against Israel," Ozel says. "And the cold peace is going to remain a cold peace. But it is obvious that Egypt is not going to be the Egypt of Mubarak."

Amrani, the Cairo analyst, dismisses some of the alarmist rhetoric coming out of Washington and Israel about Egypt possibly joining the so-called resistance alliance against Israel. Egypt is still in the grip of the army, he points out, which in general has no taste for adventurism.

"There isn't an outcry for the cancellation of the Camp David agreement. What there is, though, is I think a public sentiment that says, 'Why have close relationship with Israel? Why not confront Israel, let's say, in the United Nations about some of its actions? Why not support the Palestinians when they try to get U.N. recognition of a sovereign state?' It's going to be a headache for Israel, and that's something they'll just have to live with."

He says for the Israelis it will be an adjustment, not a sea change — but an adjustment that many Egyptians say is long overdue.