Accessibility links
Goodbye To 'Outsourced,' The Awful Junk Food I Never Wanted To Constantly Eat Writer Marc Hirsh has a confession for you: he's the one who's been watching NBC's Outsourced. And he's here to tell you it's just as bad as you've heard, and he's ready for the network to take it away already.

Goodbye To 'Outsourced,' The Awful Junk Food I Never Wanted To Constantly Eat

Goodbye To 'Outsourced,' The Awful Junk Food I Never Wanted To Constantly Eat 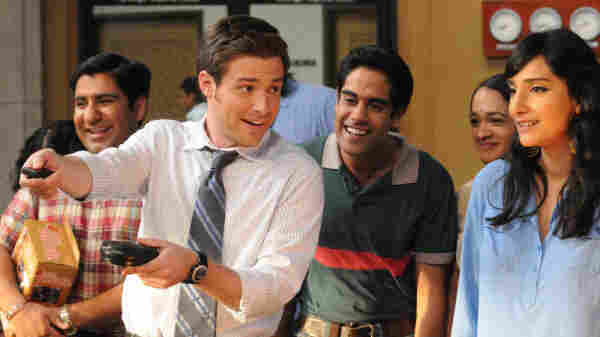 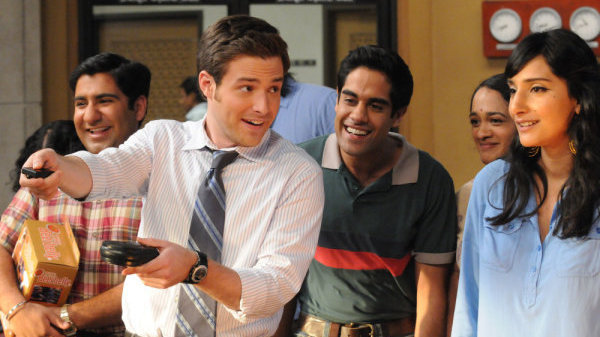 Ben Rappaport as Todd Dempsy and Sacha Dhawan as Manmeet on NBC's Outsourced.

I'm the one watching Outsourced.

But first, a story. When I was a teenager, I used to hang out after school with a friend whose pantry was always well-stocked with Cool Ranch Doritos. I loathed Cool Ranch Doritos. Awful, horrid snacks. The problem was that if I ate one, I'd work my way through half the bag, complaining all the way how horrible they tasted. They never came around to being good, but for some reason, their wretchedness was compelling.

It's the same thing with Outsourced, NBC's call-center-in-India sitcom which ends its first and probably only season tonight. Possibly because of the endorphin-fueled generosity of spirit that I feel immediately following 30 Rock, I gave it a few chances, and its compelling wretchedness kept me returning for more. I have seen every episode, so I can tell you that it's exactly as terrible as you think it was, just not for the reasons you think.

It depicts American culture in the stupidest possible terms. The call center where the show is set takes orders for a novelty catalogue, which the writers use in much the same way that Futurama uses its science-fiction, interplanetary conceit: to write gags on any conceivable bit of ridiculousness that they can come up with and pawn it off as a novelty/alien race. But not only does Futurama pull this trick off much, much better, Outsourced's Todd (the manager of the call center, played by Ben Rappaport) talks about these bits of useless crap as though they're the basic currency of American culture, rather than silly items used for coarse humor. The show doesn't say, "Yes, a bell that you ring to announce that you're horny is dumb, but it makes people laugh, and that's why we sell it." It says, "The sex bell is one of the things that makes American great and free." It's presenting worthless marginalia as societal cornerstones.

Indian culture is constantly viewed as though it's in the wrong. This goes well beyond characters with gigglish names like Manmeet and Harsheet and jokes about Indian food giving Americans diarrhea. In many episodes, Todd comes face to face with some aspect of Indian society that he doesn't understand (such as arranged marriage and simple physical contact like shoulder-touching) and spends the rest of the episode trying to convince everyone else that the American way is better. What's worse, he often succeeds. He's rarely the one learning the lesson and usually the one teaching it. Outsourced aims to be a lighthearted fish-out-of-water sitcom and has its fish constantly berate the not-water for not being water. "Everything's better in water!" assumes that just because you have gills or a blowhole, everybody else does. Air has its uses, too. Essentially, the show's main character thinks India would be a whole lot better if it were exactly like the United States, instead of, say, India. It's not necessary to be Indian to find that infuriatingly insulting.

In fact, in one of the more curious developments around this show, I can tell you – purely anecdotally – the most ardent fans that I've found are people of Indian descent. (Yes, that's written by a writer on the show, but she discusses this phenomenon anecdotally herself.) And it's not simply a matter of "Yay, we're on TV!" (For that, they'd simply have to turn to The Office, 30 Rock, The Good Wife, Parks And Recreation, The Big Bang Theory, etc.) The attitude seems to be that Indians are a self-deprecating bunch and that it's silly to be offended even when the point seems to be that Indian culture is stupid/funny/wrong, since it's a pretty funny show. Which is additionally curious because...

It's not a funny show. Early on, Todd was told that he had to fire someone. The following exchange then took place:

Rajiv: "Haven't you ever fired anybody before?"

Todd: "No. Well, once in high school. I had to kick David Watanabe off the debate team for being argumentative. Took forever."

I hope you enjoyed that, because that's the only solid joke of the entire series. It happened in the second episode.

The intended sympathies are drawn exactly wrong. Having said all of this, it's certainly possible to get comedic mileage out of an American reluctantly forced to relocate to Mumbai and not just resisting but condescending to his new employees and environment every step of the way. Where Outsourced goes wrong is in implicitly sympathizing with its main character. If Todd's objectionable attitude dug him deeper and deeper, you'd have a show that had some of the same uncomfortable and/or dark humor of The Office or Arrested Development. (Imagine if Arrested Development assumed that Gob was the hero.) Alternatively, if he was the one trying to adjust to his new surroundings (instead of trying to adjust his new surroundings to him), then you'd have a show maybe a little bit like Community, where he's forced to be somewhere he doesn't really want to be but has to make the most of it, even if it's a struggle sometimes.

Outsourced is neither of these. For one thing, Todd is a blank character. He seems to be a shallow idiot (as opposed to Community's Jeff, who's a shallow huckster). He makes bad decisions, true, but they don't bite him. The show essentially argues that he's right to make these bad decisions, which immediately makes them head-smackingly annoying. He doesn't get into trouble, for the most part. And he's not interesting (or clever) enough to make it fun when he gets away with it, because...

The writing is lazy and ham-handed. It uses every cheap trick that every bad sitcom has ever used. Right from the start, there might as well have been a giant flashing arrow over Asha (Rebecca Hazlewood) that read "THIS IS THE WOMAN THAT THE MAIN CHARACTER IS GOING TO FALL FOR, RIGHT HERE." Outsourced has been as blatant and perfunctory as you could imagine to both keep them apart (including Asha's upcoming – or is it? – arranged marriage and Todd's now-kaput relationship with Tonya, the sexually-aggressive Australian who might as well have been named "Distraction") and drag them together, doing everything except for actually writing it in the characters.

Then there's Gupta (Parvesh Cheena), the office boob who, wouldn't you know it?, ends up as Todd's roommate. Ajeet (Guru Singh), who was the Silent Bob of the show, wordless and glowering for 20 episodes, right up until he delivered a requisite eloquent speech about love in last week's episode. Madhuri (Anisha Nagarajan), whose soft-spoken shyness disguises a deep-seated wish to be a popular singer. And would you believe that a character's bachelor party results in his bride-to-be and her stern father walking in at the most compromising moment? It's just so tiring. For me, that is. Clearly not for the writers.

And yet, here I am. I'm so fascinated by how aggressively, angrily bad Outsourced was able to go that it's mesmerizing in an utter-trainwreck sort of way. There's not one thing about it that works, and yet, there it is, chugging along, with so many people involved in keeping it moving in the hopes that eventually something will spark. They've been basically pushing a dead car along the road, figuring that maybe if they pop the clutch just one more time, it'll start up. And in the meantime, they're killing themselves pushing.

So join me in celebrating tonight's finale. And please, NBC, go ahead and take the bag away from me.