Accessibility links
Scientists Fight To Prove Humanity 'Born In Africa' Anthropologists and archeologists long believed humans evolved in Asia. So when a set of hominid remains was discovered in Africa, it took a while for the find to stick. In Born in Africa, author Martin Meredith details the battles in the search for the origins of human life. 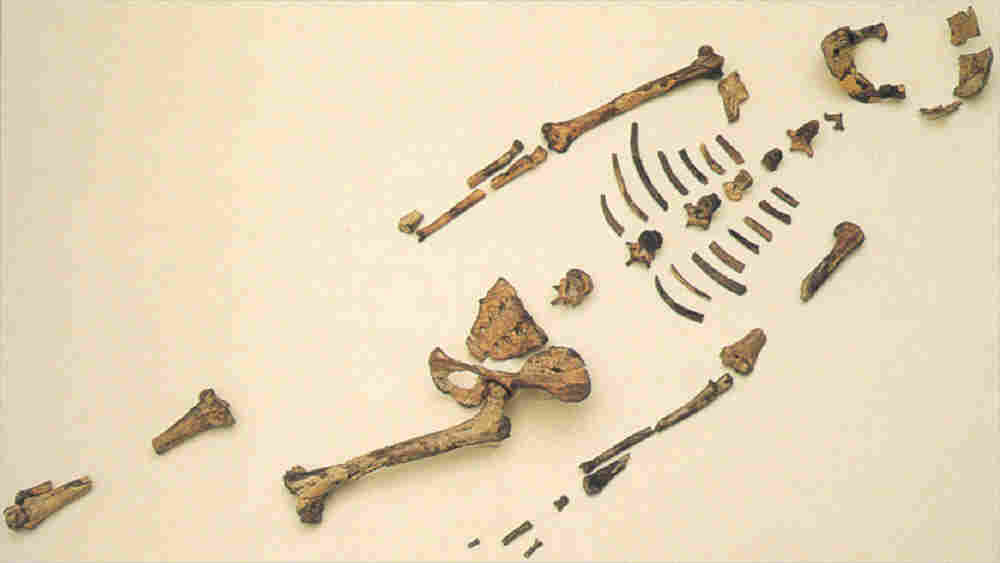 Fossil remains of Australopithecus afarensi, known as "Lucy," were first discovered in Ethiopia and Tanzania in the 1970s. Dirk Van Tuerenhout/AP hide caption

For years, anthropologists and archeologists believed that Asia held the answers to their questions about the origins of mankind. So when a set of controversial hominid remains was discovered in Africa in the early 20th century, it took a while for scholars to accept that they may have been wrong.

In Born in Africa, author Martin Meredith details the battles, contempt and fraud of the search for the origins of human life.

Meredith tells NPR's Neal Conan that Charles Darwin was the first to speculate that mankind actually evolved in Africa.

"[Darwin] didn't really have any evidence for that," Meredith says, but he figured that since gorillas and chimpanzees were humans' nearest known relatives at the time, and they're most likely to be found in Africa, so too should early humans.

Still, for about 50 years, Darwin's idea was summarily dismissed. 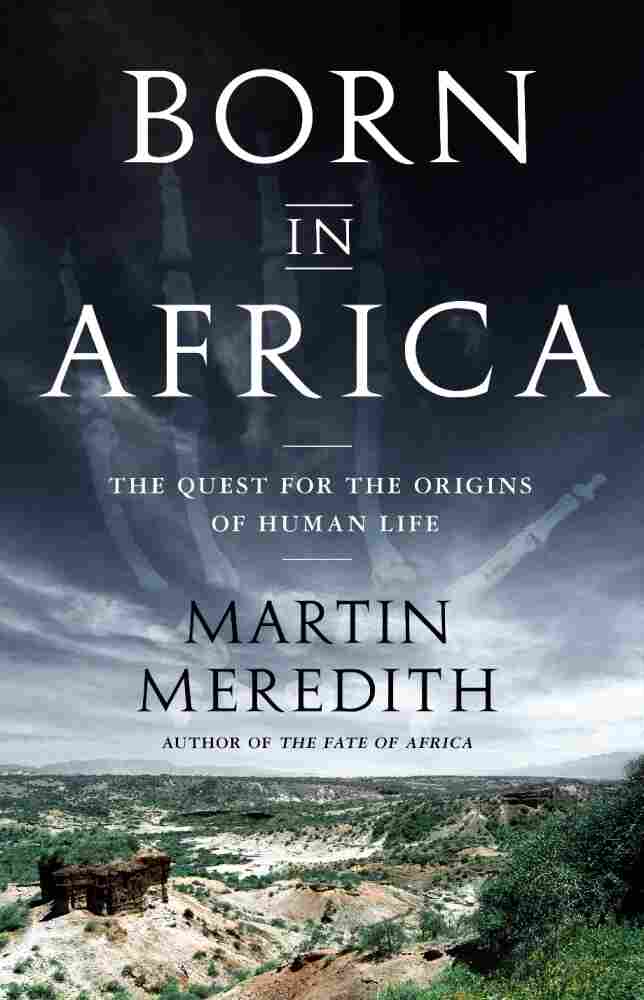 Born In Africa: The Quest For The Origins Of Human Life
By Martin Meredith
Hardcover, 288 pages
PublicAffairs
List Price: $26.99

"It was only during the 20th century that the evidence on the ground began to emerge that this piece of Darwin's speculation was likely to prove to be accurate," Meredith says.

The evidence emerged in fits and starts, and was often disputed by those who still believed Asia was the key to the origin of mankind.

"Everybody was looking for what was called at the time [the] 'missing link,'" Meredith says.

In the late 19th century, German biologist Ernst Haeckel theorized that the missing link lay between ape and human populations.

"His scheme of things was that there couldn't have been just a singular move from being an ape to a human, there had to be somebody who occurred in between," Meredith says.

So at the turn of the 20th century, he says, there was a huge, frenzied effort to find the missing link.

"The way was open for fraudsters to claim having found elements of bones and tools, and evidence of ancient humans ... in Southern England," Meredith says.

One so-called discovery became known as the Piltdown Man hoax and, according to Meredith, the people behind it were students of the going theories about what the missing link might look like. Their specimen had a fairly large brain and an ape-like jaw – essentially a mixture of ingredients.

"[They] constructed this so-called missing link and it more or less distorted science in Britain for a period of 40 years," Meredith says.

And because scientists believed it, they dismissed any evidence that didn't fall in line.

"It's extraordinary the way in which a whole scientific endeavor can be manipulated in such a way that the real truth, as it were, is hidden for decades," Meredith says.

So when Raymond Dart discovered a small-brained early hominid, Australopithecus Africanis, in South Africa in 1924, he brought it to England expecting to make a significant contribution to science. But that's not exactly how it worked out.

According to Meredith, Dart's hominid discovery "was laughed out of court."

"It's an example [of how] scientists cling on to a particular school of thought," Meredith says, "even though there is evidence which is beginning to contradict them."

Born In Africa: The Quest For The Origins Of Human Life
By Martin Meredith
Hardcover, 288 pages
PublicAffairs
List Price: $26.99

Setting out on foot across the Maasai Steppe in 1913 at the head of a column of fifty porters, Hans Reck, a twentyseven-year-old German geologist, had no clear idea how to find his destination. Behind him rose the snow-capped peak of Kilimanjaro, the highest mountain in Africa. Ahead lay volcanic highlands lining the Great Rift Valley. Reck's mission was to investigate a ravine to the west of an extinct volcano named Ngorongoro that had aroused keen interest in Berlin. But he had been given only vague instructions about its location.

Two years before, a German entomologist, Professor Wilhelm Kattwinkel, had stumbled across the ravine by chance while leading a medical expedition to this remote part of what was then German East Africa (now Tanzania). When Kattwinkel had asked local Maasai tribesmen the name of the ravine, they had thought he was referring to the wild sisal growing there — Sansevieria ehrenbergii — and had told him they called it 'oldupai'. Kattwinkel had duly recorded the name of the ravine in German as 'Oldoway'.

Exploring the eroded slopes of Oldoway, he had made a small collection of ancient fossils, taking them back with him to Berlin. When it was realised that some of the bones belonged to an unknown species of three-toed horse, there was considerable excitement. With the personal support of the kaiser, a new expedition had been authorized under the auspices of the Universities of Berlin and Munich, and Hans Reck had been chosen to lead it.

A specialist in volcanology, Reck had already proved his ability to handle African expeditions. In 1912, he had been appointed leader of a university expedition to Tendaguru in the southern region of German East Africa which had uncovered a complete skeleton of a Braciosaurus, one of the largest land animals ever to have lived. His team of porters from Tendaguru had joined him for this new expedition. But the journey across the Maasai Steppe proved arduous: In the searing heat Reck's column struggled to keep pace and was strung out for miles. Water was scarce.

Climbing up the western escarpment of the Great Rift Valley onto the slopes leading to Ngorongoro, Reck caught sight in the distance of Ol doinyo Lengai, the Maasai's 'Mountain of God', so named because it was still an active volcano. Reaching the rim of Ngorongoro, he marvelled at the spectacle around him: Below lay a collapsed crater, twelve miles across and 2,000 feet deep, forming a natural amphitheatre of 100 square miles that teemed with wildlife. Once rising to a height of 15,000 feet, the Ngorongoro volcano had exploded 2.5 million years ago, causing its dome to crumple inwards and leaving walls that were only half their original size.

But Reck was still unable to find out anything about Oldoway. A German official he met at Ngorongoro had never heard of it. Local Maasai also had no information, but they agreed to show him the way to a spring called Langavata on the western side of Ngorongoro which overlooked the great Serengeti Plains stretching away to the horizon.

For three days, Reck wandered along the fringes of the Serengeti. Then on 7 October 1913, he set up camp on the rim of a steep gorge. The surrounding terrain seemed familiar. Looking at photographs that Professor Kattwinkel had taken two years previously, Reck realized that he had found Oldoway.

In the months that followed, Reck collected more than 1,700 fossils and completed a geological survey of the area. He discovered that the gorge offered a remarkable geological record of past millennia. Its walls consisted of five distinct layers, or 'beds', of lava and ash, providing a sequence of time dating far back into antiquity. At the base was a layer of black lava; above stood a layer cake of colours — rich copper sandwiched between duller buffs and greys. No means of accurate dating were then available. But in time Oldoway was to yield crucial clues about the importance of the volcanic regions of the Great Rift Valley in revealing the origins of humankind.

The Great Rift Valley acts as a history book of the deep past. Over the last 10 million years, as two of Africa's tectonic plates have slowly pulled apart, a giant fissure has developed in the earth's crust, running for more than 3,000 miles from the lower reaches of the Zambezi Valley in Mozambique, through eastern Africa to the Red Sea where it divides Africa from Arabia. Tectonic upheavals and volcanic eruptions have transformed a relatively flat rain-forest region into a dramatic landscape of mountains, lakes and a complex array of fractures, faults and scarps. Ethiopia's landmass rose 8,000 feet above the surrounding plains, like a huge blister on the continent's skin, to form the largest volcanic massif in Africa. Eruptions in Kenya built a similar dome. Most of the uplift occurred after 7 million years ago. To the west, running parallel to the main Rift Valley, a new fissure began to develop, creating another chain of mountains and lakes, including Lake Tanganyika, the deepest lake in Africa, where the lake bottom lies 2,200 feet below sea level. Shoulders of land along the western rift were pushed up to form new mountain ranges such as the Rwenzori massif, the fabled Mountains of the Moon once thought by ancient Greek geographers to be the source of the Nile. Many of the ancient lake basins along the Rift have since disappeared, buried under layers of lava, ash, sand and mud, sediments which have subsequently been thrust upwards by tectonic movements and then exposed by erosion from wind and rain. Among the sediments lie millions of fossils, giving glimpses of life long past.

Oldoway was once part of the shoreline of a shallow alkaline lake formed about 2 million years ago and fed by streams and rivers spilling down from the volcanic highlands to the east and south. Volcanic ash from two active volcanoes — Olmoti and Kerimasi — was periodically deposited on the lake, blown there by the prevailing wind. Over a period of about 400,000 years, the lake gradually shrank and disappeared. In more recent times — about half a million years ago — a seasonal river began to cut its way through the accumulated layers of lake sediments and ash deposits, eventually carving out a steep-sided gorge, with cliffs that in places fell 300 feet. By chance, part of the gorge followed the shoreline of the prehistoric lake, an area rich in ancient fossils, as Hans Reck discovered.

In December 1913, after nearly three months exploring Oldoway, Reck was almost ready to leave when one of his workmen reported finding a human skeleton buried in a crouched position in what was called Bed II, one of the oldest layers in the gorge wall. When he inspected the site, Reck immediately understood its significance. The skeleton clearly belonged to a modern human — Homo sapiens — but it lay at a level where extinct Pleistocene animals had been found. If the skeleton was as old as its surroundings, then it meant that it wasone of the oldest human finds ever made.

Excerpted from Born In Africa by Martin Meredith. Reprinted by arrangement with PublicAffairs, a member of the Perseus Books Group. Copyright 2011. 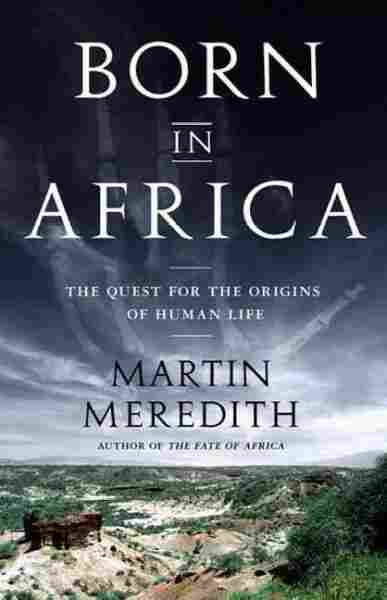 The Quest for the Origins of Human Life