Accessibility links
This Is The Police: Put Down Your Camera A Newark, N.J., teen is suing police for detaining her after she used a cellphone to videotape on-duty officers. As technology makes it easier to shoot video, clashes like hers are becoming more common — and are fueling a national discussion on the legality of taping law enforcement officials. 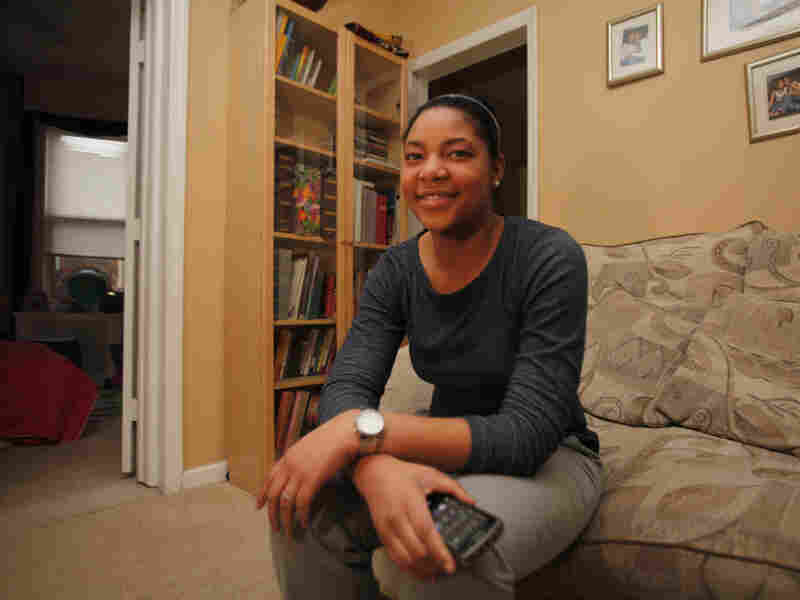 Khaliah Fitchette in her Newark home. (The cellphone she's holding is not the one she used to shoot video of officers). Amanda Brown Murphy/ACLU-NJ hide caption 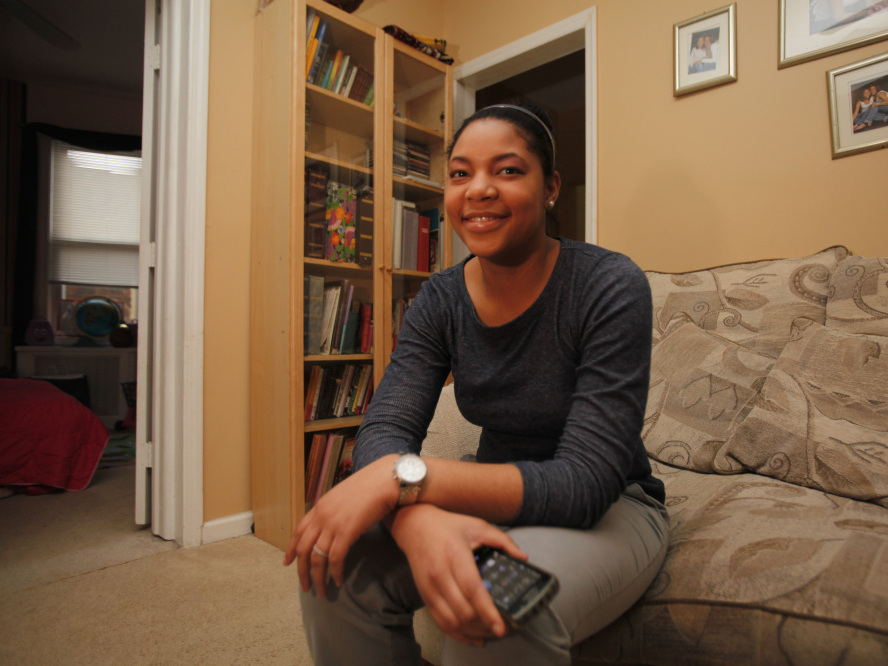 Khaliah Fitchette in her Newark home. (The cellphone she's holding is not the one she used to shoot video of officers).

There are more than 280 million cellphone subscribers in the U.S., and many of those phones can record video. With so many cameras in pockets and purses, clashes between police and would-be videographers may be inevitable.

Consider what happened to Khaliah Fitchette. Last year, Fitchette, who was 16 at the time, was riding a city bus in Newark, N.J., when two police officers got on to deal with a man who seemed to be drunk. Fitchette decided this would be a good moment to take out her phone and start recording.

"One of the officers told me to turn off my phone, because I was recording them," she said. "I said no. And then she grabbed me and pulled me off the bus to the cop car, which was behind the bus."

The police erased the video from Fitchette's phone. She was handcuffed and spent the next two hours in the back of a squad car before she was released. No charges were filed.

Fitchette is suing the Newark Police Department for violating her civil rights. The New Jersey chapter of the American Civil Liberties Union helped bring the lawsuit.

"All of us, as we walk around, have to understand that we could be filmed, we could be taped," says Deborah Jacobs, director of the ACLU chapter. "But police officers above all others should be subject to this kind of filming because we have a duty to hold them accountable as powerful public servants."

The Newark Police Department did not return calls for comment. But Newark is not the only department that has tried to discourage its citizens from filming on-duty cops.

In a video from 2010, a state trooper in Maryland flashed his gun while pulling over motorcyclist Anthony Graber for speeding. When Graber posted the video from his helmet cam on YouTube, prosecutors charged him with breaking the state's wiretapping law because he recorded the trooper's voice without consent. A judge dismissed the case. But that hasn't changed the opinion of some in the law enforcement community who say video recording is potentially dangerous for cops.

"They need to move quickly, in split seconds, without giving a lot of thought to what the adverse consequences for them might be," says Jim Pasco, executive director of the Fraternal Order of Police.

"We feel that anything that's going to have a chilling effect on an officer moving — an apprehension that he's being videotaped and may be made to look bad — could cost him or some citizen their life," Pasco says, "or some serious bodily harm."

Anthony Graber gets pulled over for speeding by a Maryland state trooper. The motorcyclist was charged with violating the state's wiretapping law after posting this video of the incident. The case was dismissed.

Tom Nolan, a former Boston police officer, says police have to get used to the world of cameras everywhere. "There's always going to be a pocket of police officers who are resistant to change," he says. "But I think the vast majority of police have been acclimated to the reality that what they're doing is likely being recorded at any given time."

Nolan now teaches at Boston University. He says police in Massachusetts train their officers to tolerate video recording, as long as no other crime is taking place.

And Nolan thinks departments around the country will eventually do the same.

"The police will get the message when municipal governments and police departments have got to write out substantial settlement checks," he says. "Standing by itself, that video camera in the hands of some teenager is not going to constitute sufficient grounds for a lawful arrest."

"It would have to be important enough to get myself in trouble for, I guess," she says.

She has this attitude, Fitchette says, because she thinks she could get in trouble again, even though her detention was allegedly unlawful.

But the legality of filming is, ultimately, a question the courts will have to answer. Because no one expects teenagers — or the rest of us — to stop shooting video with our phones.

The Rules And Your Rights For Recording Arrests July 8, 2010