Accessibility links
Early Impulse: A 50-Year Legacy In Jazz The Impulse jazz label, famous for its fold-out black and orange album covers, turns 50 this year. To celebrate, the label has released a box set featuring its early releases. Jazz critic Kevin Whitehead says the set showcases the diversity and talent of the musicians Impulse recorded. 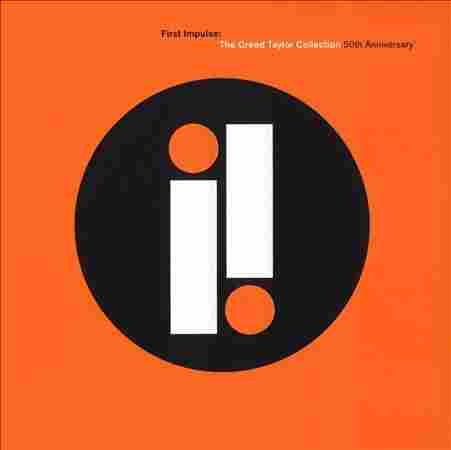 In 1961, ABC Records got into the jazz market when producer Creed Taylor set up the Impulse label, whose glossy fold-out album covers with orange and black spines were easy to spot on collectors' shelves. Jazz critic Kevin Whitehead says collectors usually had lots of them — more for the music than the packaging. The label turns 50 this year, and First Impulse: The Creed Taylor Collection, 50th Anniversary, a commemorative box of early Impulse releases, has just been released.

The trombone duo of J.J. Johnson and Kai Winding played the first tune recorded for Impulse in 1960, "This Could Be the Start of Something Big." It was released as a single, hoping for a little luck, but Impulse got more jukebox action with Ray Charles' "One Mint Julep," arranged by Quincy Jones with Charles on organ.

Charles' 1961 album Genius + Soul = Jazz is rocking, slicked-up blues out of period Count Basie, with Basie's band on half of it. That album appears in the set First Impulse: The Creed Taylor Collection, 50th Anniversary, containing the first six LPs Impulse recorded before Taylor moved on.

Nowadays, Impulse is remembered as the label for which John Coltrane and friends made a lot of records. But those first sessions were less about explosive small groups than handsome arrangements for big or midsize bands, like Ray Charles', or Kai Winding's four-trombone units. The label's fifth release was saxophonist Oliver Nelson's masterpiece Blues and the Abstract Truth. It's a set of fresh variations on jazz musicians' favorite templates: the blues and the chord pattern to Gershwin's "I Got Rhythm." There's sleek writing for four horns, electrifying saxophone solos from Eric Dolphy, and Bill Evans brooding on piano.

The other great early Impulse LP was Out of the Cool by Gil Evans, the arranger of Miles Davis' orchestra records, like Sketches of Spain. Evans had been working with his own band in a club and brought very little music to the studio; he orchestrated as the tape rolled, cuing in players and stretching meager materials to good effect. Evans gets overlooked as an early master of minimalism. His "La Nevada" is like Gus van Sant's movie Gerry, about two mooks lost in the desert; it's captivating, even though not much happens.

With short motifs that keep repeating, harmony that barely moves and extended solos to flesh it all out, Evans' music is not so different from what Coltrane was working on when he came to Impulse. His label debut Africa Brass, with orchestra charts by Cal Massey, sounds like Gil Evans' simmer brought to a boil.

With all this music brought together in one place, you hear how diverse artists reflect their time, one way or another. Decades later, similarities become more obvious: Objects in the distance appear closer together. The Impulse at 50 set looks sharp, in the label's traditional orange and black; it has a few alternate takes that have been out before, as well as three rough rehearsal extracts for the Africa Brass sessions that the old Impulse would never see fit to release.

The Impulse label was always about more than Coltrane and the avant garde; it was home to Ellingtonians and organ players, drummers galore and unclassifiables like Pee Wee Russell and Charles Mingus. The slick packaging helped, because it showed the musicians that the label was serious about promoting their music. They did not waste those opportunities.