Accessibility links
Service Dogs Teach Educators About Disabilities The use of service animals has been growing among children with autism-related disorders, and schools have been fielding more requests to allow them. But some districts worry the animals may violate the rights of other students and staff. Families hope new federal guidelines will help them avoid legal battles over their animals.

Many disabled people say that life without their service animals is unthinkable. And while public institutions are required to admit service animals without question, some public schools claim they cannot handle the disruption of a dog in a busy classroom.

Disabled students are hoping new federal guidelines will help them avoid legal battles over their animals. 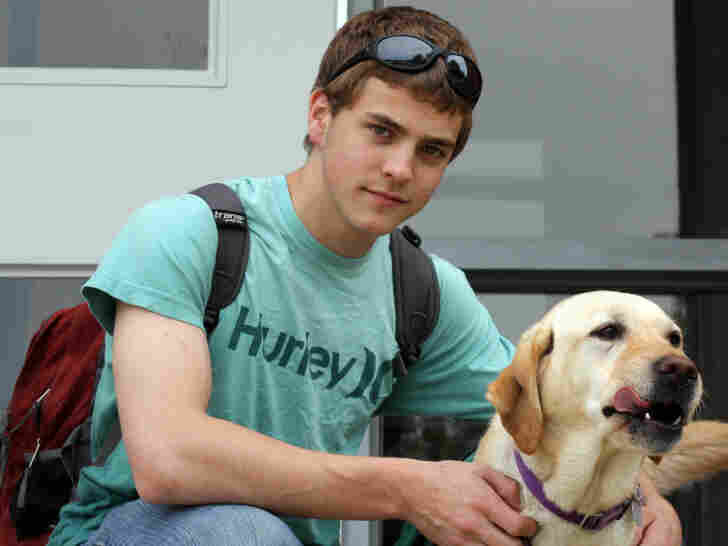 Nathan Selove relies on his service dog, Sylvia, to help him deal with meltdowns and other issues related to Asperger's syndrome. Larry Abramson/NPR hide caption 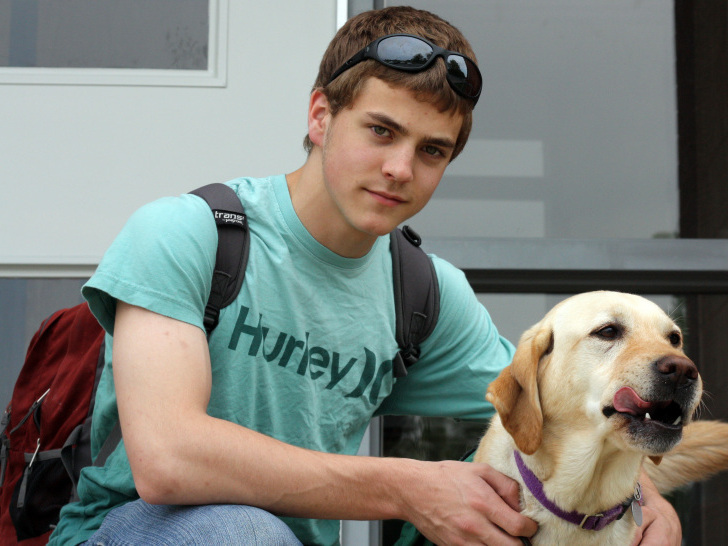 Nathan Selove relies on his service dog, Sylvia, to help him deal with meltdowns and other issues related to Asperger's syndrome.

Everyone at Sherando High School in Virginia knows Nathan Selove: He's the kid with the dog.

"Actually," he says, "she's the only dog in the Frederick County public school system, so far."

Sylvia is a sweet-tempered yellow Lab who accompanies Nathan to school every day. She wears a green vest that proclaims: "Don't pet me, I'm working."

Nathan used to be a target of bullying, but is less so now, he says. He strolls down the hallways, leash in hand, looking relaxed, sunglasses propped above his forehead. You would hardly know he has Asperger's syndrome, or that he sometimes has terrifying meltdowns in class. That's why Sylvia is here.

"And when I feel the need to pet her," he says, "I just sort of lean down and pet her. And sometimes, like when I get really stressed out — which doesn't actually happen that often anymore — she'll get on my lap."

In history class, Nathan sits down, and Sylvia grabs a spot under his desk and chills. In a room full of high school sophomores, she is the calmest mammal there.

History teacher Doreen Pauley says Sylvia is just part of the class now. "If he needs her, she's there; if he doesn't, she's just quiet. She's a good dog."

The blind don't usually get a guide dog until they are adults, so the service animals that schools see are focused on other conditions, like autism — a growing number of autistic children are paired with service animals.

The Frederick County school system was initially hesitant when Nathan's parents decided that he would benefit from having a service dog in middle school. But now, Sylvia even rides the bus to school with Nathan.

A Dispute In California

Not every parent has gotten the same reception. Attorney Kathleen Mehfoud represents a number of Virginia school districts and says many schools worry they may violate the rights of other students by admitting a service dog.

"For example, there are a number of students and staff who may be allergic to dogs," she says.

Disability rights groups say allergies and other issues can easily be dealt with. They pushed the U.S. Justice Department to issue new rules this spring clarifying that the Americans with Disabilities Act does apply to schools.

His behaviors are really more calm at home, or when we're out with [his service dog] Eddy. I don't know what's going on at school that's really increasing these aggressive behaviors.

But some districts still question why dogs are necessary, especially for students who already get intensive special ed services.

In Orange County, Calif., Milka Ciriacks has been fighting to have Eddy the service dog accompany her 6-year-old son, Caleb, to school. Caleb is severely autistic and used to run away all the time.

"It didn't really make sense to me until we had the episode where Caleb took off," she says. "And that was like the big red flag that like, we need something else."

For the past year, the Cypress School District has refused to allow Eddy into the school, so Ciriacks has turned to federal court. The district would not talk on tape, but in court filings, officials argue that Caleb is making good progress without a dog.

The district worries that being tied to an animal will reduce his independence. But Ciriacks says that without Eddy, her son is having outbursts in school.

"His behaviors are really more calm at home, or when we're out with Eddy," she says. "I don't know what's going on at school that's really increasing these aggressive behaviors."

The new federal regulations are meant to stop these cases from going to court. The rules tell schools they must admit legitimate service dogs. But they also say that schools do not have to allow the wide variety of "therapy animals," who are not trained, and primarily provide companionship and comfort.

Schools attorney Mehfoud says it's about time. "We have dealt with requests for service snakes and service monkeys in the past," she says.

The new rules make it clear that trained dogs are pretty much the only animals who qualify.

Home at last after working all day, Sylvia sheds her service vest and becomes a house pet for a little while.

She gets to run around on the Selove family's 11-acre property. The family home is a bit of service dog heaven. Ramon Selove, Nathan's father, also has Asperger's syndrome and takes his dog, Cori, to his job as a college professor. But he has this caution: Service dogs are a lot of work.

Training can cost tens of thousands of dollars and involves weeks of classroom work that can be challenging for kids like Nathan. But Selove says his son was so motivated by the chance to have this dog that "he was willing to do things he wouldn't have been willing to do otherwise."

Sylvia may well be Nathan's best friend. Many other disabled schoolchildren now also have the U.S. Justice Department as their buddy.