Accessibility links
Food Expert Michael Pollan Plays 'Not My Job' Author Michael Pollan stops by to play a game called "Honest to goodness, if I had one of these in my home, I'd never leave the bathroom." Three questions about high tech toilets from Japan. 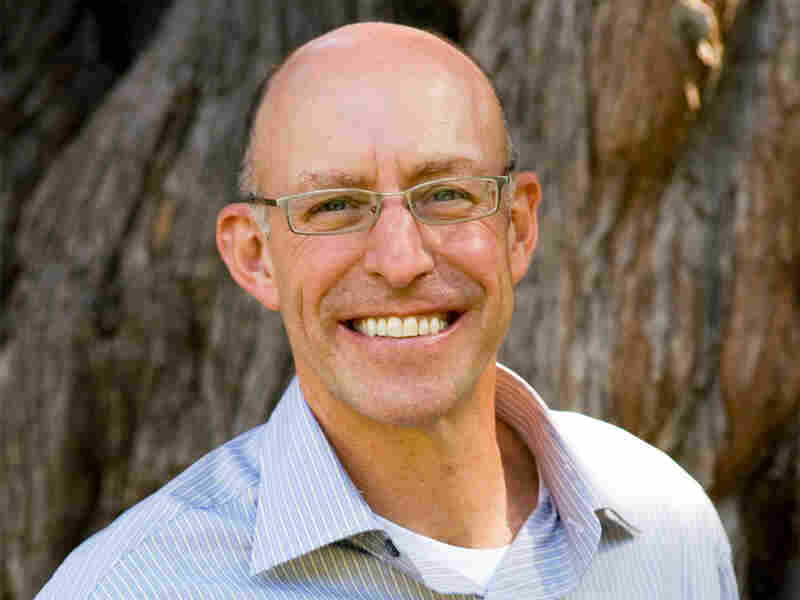 Author Michael Pollan stops by to play a game called "Honest to goodness, if I had one of these in my home, I'd never leave the bathroom." Three questions about high tech toilets from Japan.

(Also, he learns why you do not come between Paula Poundstone and her Ring Dings.)

And now, the game where we like to talk to experts in one field about something else entirely. Michal Pollan is the most well-known authority on food and food economics working today in journalism. In his books, "The Omnivore's Dilemma" and "In Defense of Food," he sums up his advice as eat food, not too much, mostly plants - which, of course, is absolutely un-American.

SAGAL: Great to have you here.

SAGAL: I just want to say - as we start - I'm a huge fan of your books. One of the reasons I like your work is because I love conspiracy theories. That's a hobby of mine. And you are like, this conspiracy theorist except there really is a conspiracy. Apparently - I mean, to summarize your work, the reason we're all fat and sick is Richard Nixon's fault.

POLLAN: Well, that's a gloss on my work.

SAGAL: I know. That's my take.

POLLAN: Well, yeah, there was this interesting moment of hyper inflation - hyper food inflation back in the '70s, when he was running against McGovern, who was a farm-state senator. And he was really afraid of losing the farm folk. So he made this grain deal with Russia, and that drove up farm prices, secured the farm vote. But afterward, it led to this bout of hyper inflation. And women were in the street, protesting the price of butter. There was horse meat showing up in the butcher shops, and people were really upset.

So he hired Earl Butz - the sage of Purdue, an agricultural economist, a brilliant man - and gave him the job of, drive down food prices; do whatever you can to make food as cheap as possible in America. And he did. He figured out a new way to subside agriculture. He persuaded farmers to get big - you know, only grow corn and soybeans - with the result that we increased the amount of corn we grow from 4 billion to 14 billion bushels. And soda got really cheap, and meat got really cheap - and we got really fat.

POLLAN: We're very confused about food, I think - which, you know, which is weird. I mean, what other species needs experts to tell them how to eat?

POLLAN: But it's been a good career for me.

POLLAN: It's worked out.

POUNDSTONE: I can't tell you how many times I've had to tell my dog to get his head out of the garbage can, so.

SAGAL: So, all right, so what should we be eating?

POUNDSTONE: How thick is your book?

SAGAL: Like, for example, one of my rules is: Food does not come with a prize.

POLLAN: That's good. I'm going to use that one.

ROCCA: Wait, wait, Cracker Jacks do, though. I don't understand. What?

POUNDSTONE: OK, but let me ask you something. One of the things that has made my life worth living is Ring Dings. And I feel that it is food. Are you going to tell me that's not food?

POLLAN: There's a few simple tests to figure out if a Ring Ding is food or not. How many ingredients does a Ring Ding have?

POUNDSTONE: And a rich, chocolate outer coating. What's the matter with you?

POLLAN: I think I would look at the package next time. That creamy is not cream. It...

POUNDSTONE: What the hell's the matter with you?

POUNDSTONE: What do you mean special occasion? I said it's what makes my life worth living.

POUNDSTONE: Are you suggesting I save it for one day a year?

POLLAN: I wouldn't want to deprive you of your...

POUNDSTONE: You know what, you may know a lot about food, but you don't know the first thing about living, buddy.

SAGAL: Hold on. I actually wanted to ask you that. You've become this hero of the whole foods, local foods, real foods movement. Is that a burden to you? I mean, if you ever want to eat a cheeseburger, do you have to go hide somewhere?

POLLAN: Well, I did - shortly after I got to Berkeley, I was in Berkeley Bowl, and there are a lot of...

POUNDSTONE: What is it?

POLLAN: It's a local supermarket, which has wonderful fresh produce, grass- fed beef - it's your idea of hell, I think. And my son, when he was young, really liked Fruity Pebbles.

POUNDSTONE: I'll bet he did.

ROCCA: I love those.

POLLAN: And that was his Saturday, you know, breakfast. I was actually reaching for a box of Fruity Pebbles, and somebody tapped on my shoulder. And it was this tall, bearded graduate student and he said - and I'm like this - he said, I'm watching Michael Pollan shop for groceries.

POLLAN: And I didn't go in that store again for many, many months. Another rule is, don't eat any food that won't eventually rot. I had a Twinkie for two years. I owned a Twinkie that I...

POUNDSTONE: Oh, you did not.

POLLAN: I did. I have it. I didn't bring it with me. I have it on my shelf in my office. And I would give it a squeeze every couple of weeks to see how it was doing.

POUNDSTONE: That's not good for them.

ROCCA: You bruised your Twinkie.

POLLAN: Two years later, it was as soft and spongy as the day I bought it.

ROCCA: But if you unwrap it - you didn't unwrap it.

POLLAN: I didn't unwrap it.

POUNDSTONE: All right, OK. My problem, I try to teach my kids to eat healthy food. But you get a cantaloupe, and you don't know when it's going to come of age. You have no idea - that period between when it's like, hard as a rock to when it's smushy inside, is about ten minutes.

POUNDSTONE: And sometimes, you got to wake the kids in the middle of the night because the cantaloupe's ready.

POUNDSTONE: Your kid wanted Fruity Pebbles just so he could sleep.

SAGAL: Well, Michael Pollan, we have invited you here to play a game that this time, we're calling...

"Honest To Goodness, If I Had One Of These In My Home, I Would Never Leave The Bathroom."

SAGAL: So you're an expert on food, what we put into our bodies.

SAGAL: And we were casting around for something you might not know anything about. And we eventually decided on the other end of the process. And nobody handles that better than the Japanese. We are going to ask you, now, three multiple-choice questions about the latest high-tech, electronic, Japanese super toilets. Get two such questions right, you will win our prize for one of our listeners. Carl, who is author Michael Pollan playing for?

KASELL: He is playing for Linda DeSantis of Berkeley, California.

SAGAL: Here's your first question. Leading Japanese high- tech toilet manufacturer Toto Corporation offered free repairs to one model after some of that model were found to do what? A, burst into flames; B, circulate water clockwise, in the shameful southern hemisphere fashion; or C, lower the motorized toilet seat back down too quickly, shocking and in some cases, trapping male users...

SAGAL: ...who were just taking a little bit too much time.

SAGAL: You're going to go with C - all of a sudden just, boom.

SAGAL: Well, you're right in that many of the toilets have motorized lids that go up and down by themselves. But in this case the problem was, they were bursting into flames.

ROCCA: Doesn't it depend on what you eat?

SAGAL: These toilets are highly mechanized and motorized, with lots of electronic components. And in this particular case, the bidet attachment was catching fire.

POUNDSTONE: Yeah, but corn syrup can douse that.

SAGAL: Yeah. That's why it's important to have.

SAGAL: All right, we have two more questions for you. Here's your second one. Ready?

POLLAN: Are they all about toilets?

SAGAL: They are, in fact, all about Japanese super toilets.

SAGAL: Many Japanese public restrooms, already equipped with futuristic toilets, have upgraded them further with a device called the Sound Princess. What does the Sound Princess do? A, it plays a coaxing, gentle female voice to help men get their business done, and that's by encouraging them; B, it simulates the sound of water flushing to cover other bathroom noises; or C, it rates the strength of your urination by its sound as a measure of prostate health.

POLLAN: I'm going to say B.

SAGAL: You're going to go for B. You're right.

SAGAL: It covers the sound. Japanese people, especially women, are reputed to be very embarrassed by bathroom noises. So these devices, the Sound Princesses, cover it up with whatever noise they choose. All right, this is exciting, one for two. You have one more question to go. Get this, you win.

They're not done, Japanese toilet engineers. Just recently, a model went on the market with what new feature? A, a massage attachment that will reach up and rub your shoulders as you use the device; B, a personalized MP3 player that will recognize you by your weight and automatically play your favorite music; or C, a remote control to save you the trouble of having to turn slightly to use the control pad.

SAGAL: You're going to go with the remote control?

SAGAL: Hey. A little remote control so you can, you know, operate its features. By the way, the remote control on the new model has a big button that's labeled, in English, Stop. And the reason is, is because westerners in Japan have had a problem. They don't know how to deal with these toilets, and there's been incidents of people being trapped on them or spraying water all over the bathroom. So they want to make it easier.

BODETT: A panic button on your toilet remote.

POLLAN: You know, you've given me an idea for a sequel.

SAGAL: That's great. I'm so glad to help. Carl, how did Michael Pollan do on our quiz?

POLLAN: Thank you. Thank you very much