Accessibility links
Bike-Mad Author Finds 'Happiness On Two Wheels' Lots of guys buy a midlife crisis sports car, but not British author Robert Penn. He set out to build the ultimate bike, one that he could ride every day and grow old with. His search cost him thousands of dollars and took him all over Europe and across the Atlantic. 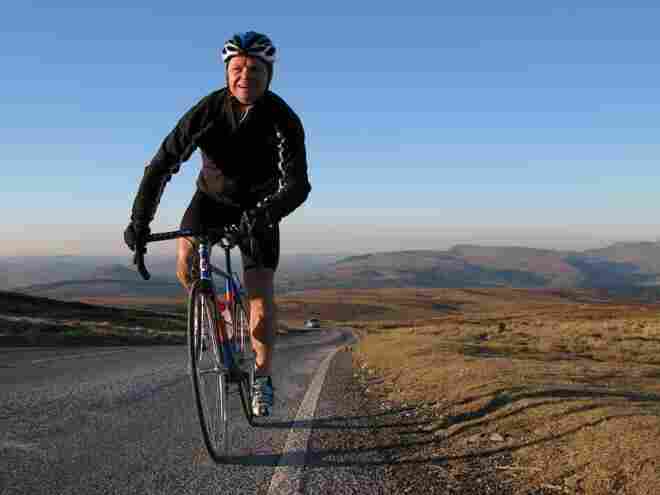 Before setting off on his quest for two-wheeled perfection, author Robert Penn had already logged 25,000 miles biking around the globe. Bloomsbury USA hide caption 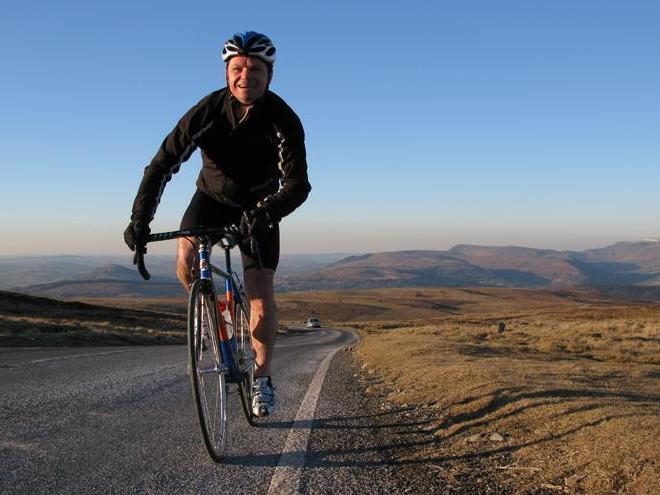 Before setting off on his quest for two-wheeled perfection, author Robert Penn had already logged 25,000 miles biking around the globe. 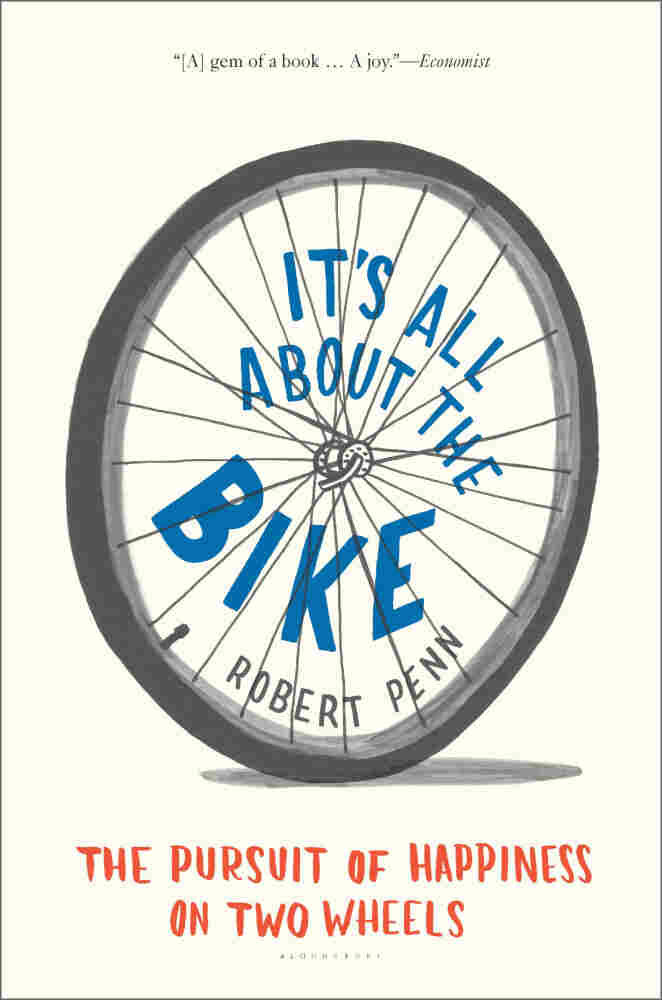 It's All About The Bike
By Robert Penn
Hardcover, 208 pages
Bloomsbury USA
List Price: $20

British author Robert Penn has ridden a bicycle almost every day for the past 36 years. He owns six bikes — for summer riding, winter riding, everyday commuting and everything in between. But not one was exactly right. Penn needed the perfect bike.

He writes about his quest to build that bike in a new book, It's All About the Bike: The Pursuit of Happiness on Two Wheels. "I should qualify that," Penn tells weekends on All Things Considered host Guy Raz. "It's my perfect bike. I wouldn't presume to imagine that it's anyone else's, and in fact I rather hope it isn't."

Penn's perfect bike was handmade, tailored to his body and his riding habits. "I was looking for a, very broadly, a talismanic bike, a special bike, a bike that I'm going to ride for the rest of my life," he says. "I wanted a bike that somehow reflected my devotion to the machine."

Penn's quest took him all over Europe and the United Kingdom, across the Atlantic to northern California, and through several centuries of cycling history.

Though the bicycle seems commonplace today, Penn says it's almost impossible to imagine the excitement it caused at the turn of the last century. "It was an extraordinary explosion. There were a million new cyclists every year by 1895," he says. "It was absolutely rocket-fueled."

The arrival of the bicycle had all sorts of dramatic implications, Penn says. "The geography of cities changed, because people could now commute, and so suburbs began to be created. It had a huge role to play in the issue of practical clothing for women."

Cycling was the first acceptable sport for women, he says, and when the suffragette movement took hold a decade or two later, "people looked back and recognized that the bicycle had been fundamental in the emancipation of women."

Penn did eventually succeed on his quest for his own personal perfect bike. It took more than a year, and it cost thousands of dollars, but Penn says it's worth the effort and expense.

"It is the loveliest thing I've ever owned," he says. "For a bike that I'm going to ride for 30 years, I think that's a pretty good deal."

Excerpt: 'It's All About The Bike'

It's All About The Bike
By Robert Penn
Hardcover, 208 pages
Bloomsbury USA
List Price: $20

The bicycle can be described in under fifty words: a steerable machine comprising two wheels with pneumatic tyres, mounted in-line on a frame with rotating front forks, propelled by the rider's feet turning pedals attached by cranks to a chainwheel, and by a loop of chain to sprockets on the rear wheel. It's very simple. The bicycle can be ridden, on a reasonable surface, at four or five times the pace of walking, with the same amount of effort — making it the most efficient, self-powered means of transportation ever invented. Fortunately learning to ride a bicycle is easy (so easy, in fact, that many of our primate cousins have got the hang of it too). And, once learnt, riding a bicycle is something we never forget.

I've ridden a bike most days of my adult life. I can't, though, remember the first time I rode a bike as a child. I know I'm supposed to. I'm supposed to recall perfectly that moment of epiphany we've all shared, when the stabilizers were removed on an incline in the local park; when the hand of my father pulled back and I wobbled forward into the great equilibrium that I will never leave; the moment when I unconsciously steered, albeit unsteadily, the support points of the bicycle under the centre of mass, and first grasped the esoteric principle — balance. But no, I'm afraid I can't remember it. In fact, I can't even remember my first bike.

The first bike I can remember was a purple Raleigh Tomahawk, the diminutive version of the Chopper. I progressed to a Raleigh Hustler: purple again, and pimped up with white handlebar tape, a white saddle, a white water bottle, white cable guides and white tyres — it was the '70s. When I outgrew this, Grandma stepped in with a fifth-hand, Dawes three-speed, kids' roadster. Compared to the Hustler, it had the panache of coveralls, but it flew. During the summer of 1978 I rode loops of my neighbourhood from dawn to dusk. My parents saw I'd got the bike-bug. The following spring, I was given a ten-speed Viking racer — a black thoroughbred. It was in the window of the local bike shop when I went to collect it. 'Ever bike?' Jack London wrote. 'Now that's something that makes life worth living! . . . Oh, to just grip your handlebars and lay down to it, and go ripping and tearing through streets and road, over railroad tracks and bridges, threading crowds . . . and wondering all the time when you're going to smash up. Well, now, that's something!' That's how I felt on my Viking racer. I was born restless. Aged 12, I finally had wings.

When I landed, I was a teenager. The bug — to ride and ride, for the sheer love of it — had gone. I abandoned the rhythmic cadence of two wheels for the rhythmic sounds of 'Two Tone'. Of course, I still used a bike to get around: three unloved, beat-up racers followed. At the beginning of my final year at university, my flatmate arrived on a red tandem. We did moonlit time trials round the Georgian squares. The bike was so honest and so red; we named it — Otis.

In 1990, I bought my first mountain bike — a no-nonsense, British-built, rigid Saracen Sahara. I rode it from Kashgar in China to Peshawar in Pakistan, over the Karakoram mountains and the Hindu Kush. When I was back in London, working as a lawyer, the Saracen more than carried me around: it represented life beyond the pinstripe suits. Then it got stolen. A succession of mountain bikes, customized for commuting, followed: a Kona Lava Dome, two Specialized Stumpjumpers, a Kona Explosif and others. They all got stolen. I once had two stolen in a weekend. There were excursions along the Ridgeway, and to Dartmoor and the Lake District, but most of the time these bikes merely conveyed me across the city's backside.

On a wintry Saturday afternoon in 1995, I walked into Roberts Cycles, a venerated frame builder in South London, and ordered a bespoke touring frame. It was called 'Mannanan', after the mythical Celtic figure Mannanan mac Lir, who protects the Isle of Man, where I grew up. I cycled across the USA, Australia, South-East Asia, the Indian subcontinent, Central Asia, the Middle East and Europe — effectively around the world. The American bike mechanic, Lennard Zinn wrote: 'Be at one with the universe. If you can't do that, at least be at one with your bike.' After three years and 25,000 miles, I was.

Today, Mannanan is on the wall in my shed. I own five other bikes: a ten-year-old, steel Specialized Rockhopper, which I am continually rebuilding to keep it in serviceable, commuting order. My old road bike, for winter riding, is a hotchpotch of componentry on a Nervex aluminium frame with Ambrosio carbon forks. The new road bike is a Wilier, with a sleek, Italian-designed carbon frame, manufactured in Taiwan. My old mountain bike is a Schwinn. My new mountain bike is the most recent purchase: a super-light Felt aluminium, cross-country hard tail, perfect for the trails in the Brecon Beacons, where I now live and ride.

With this small troop of hard-working bicycles, my bases are covered. Yet something fundamental is missing. Like tens of thousands of everyday cyclists with utilitarian machines, I recognize there is a glaring hole in my bike shed, a cavernous space for something else, something special. I'm in the middle of a lifelong affair with the bicycle: none of my bikes even hints at this.

I've been riding bicycles for thirty-six years. Today, I ride to get to work, sometimes for work, to keep fit, to bathe in air and sunshine, to go shopping, to escape when the world is breaking my balls, to savour the physical and emotional fellowship of riding with friends, to travel, to stay sane, to skip bathtime with my kids, for fun, for a moment of grace, occasionally to impress someone, to scare myself and to hear my boy laugh. Sometimes I ride my bicycle just to ride my bicycle. It's a broad church of practical, physical and emotional reasons with one unifying thing — the bicycle.

I need a new bike. I could go on-line right now with a credit card and spend $5,000 on a mass-produced carbon or titanium racing bike. I could be tanking through the hills on a superb new machine at sunset tomorrow. It's tempting, very tempting. But it's not right. Like many people, I'm frustrated at the round of buying stuff that is designed to be replaced quickly. I want to break the loop with this bike. I'm going to ride it for thirty years or more and I want to savour the process of acquiring it. I want the best bike I can afford, and I want to grow old with it. Besides, I'm only going to spend this kind of money once. I require more than a good bike. In fact, I require a bike you can't buy on the Internet; a bike you can't buy anywhere. Anyone who rides a bike regularly and has even the faintest feeling of respect or affection for their own steed will know this hankering — I want my bike.

I need a talismanic machine that somehow reflects my cycling history and carries my cycling aspirations. I want craftsmanship, not technology; I want the bike to be man-made; I want a bike that has character, a bike that will never be last year's model. I want a bike that shows my appreciation of the tradition, lore and beauty of bicycles. The French nickname for the bicycle is La Petite Reine — I want my own 'little queen'.

Excerpted from It's All About the Bike: The Pursuit of Happiness on Two Wheels by Robert Penn. Copyright (c) 2011 by Robert Penn. Reprinted with permission by Bloomsbury USA. 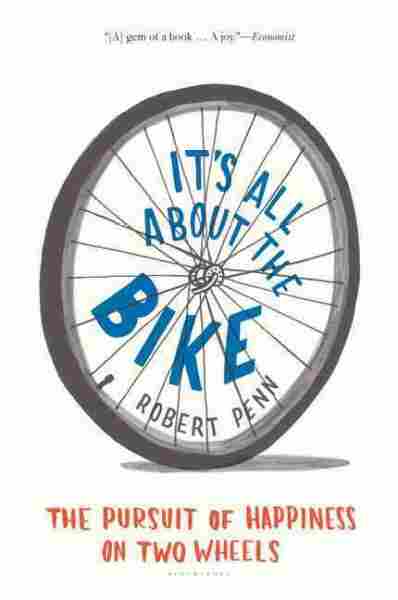 It's All About the Bike

The Pursuit of Happiness on Two Wheels