Accessibility links
The Other Big Deficit: Many Teens Fall Short On Sleep Most high school students accrue a "sleep debt" of five to 10 hours by the end of a school week. Parents can help their teens get to bed on time by encouraging naps, regulating light in the home and discouraging caffeine in the afternoon. 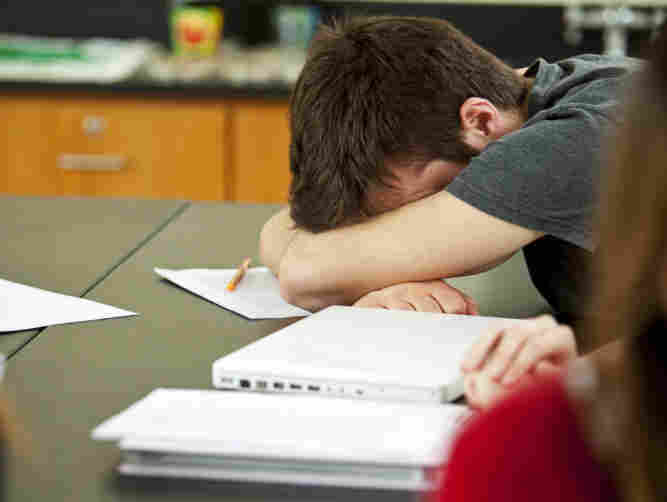 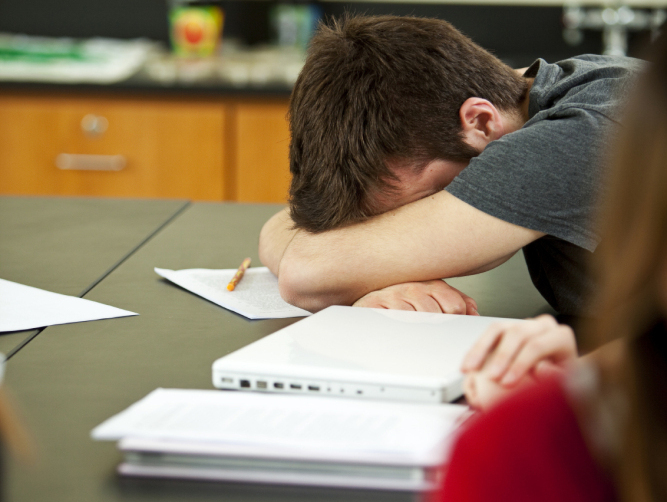 The typical high school senior gets less than seven hours of sleep on school nights. But teenagers need a great deal more.

To meet all of these demands, surveys show, high schoolers usually stay up close to midnight on school nights. And then they have to get up early the next morning, typically around 6 or 6:30 a.m., to get to school on time, as most high schools start classes around 7:30 a.m.

By Friday, most teens are very tired, says Dr. Helene Emsellem, a sleep researcher with George Washington University in Washington, D.C. And then comes the weekend.

Got questions about teens and sleep? Submit them in the comments section at the bottom of this page by Tuesday at noon EDT. We'll pose some of them to Dr. Helene Emsellem and other sleep experts. Come back to NPR.org on Thursday to read their responses.

"Every parent of a teenager knows that if you try to get them up in the morning on the weekends, they're tired, grouchy, irritable and not the charming individuals that they're capable of being, because they're so exhausted," says Emsellem, a neurologist who also runs the Center for Sleep and Wake Disorders in Chevy Chase, Md.

She says the typical high school senior gets less than seven hours of sleep on school nights. But they need a great deal more.

"Most studies show a fairly consistent 9 1/4 hours sleep requirement," says Emsellem. "So there's a huge gap between what they're getting on an average school night and what they require."

An adolescent's biology bears some of the blame for this sleep problem. As teens progress through puberty, unprecedented growth occurs in body and brain that requires a lot of sleep.

In addition, something else is changing: The very brain chemical that makes one feel sleepy — a hormone called melatonin — is released later and later in the evening as teens get older.

Because of this shift in the onset of melatonin, teenagers don't feel sleepy until later at night, says Stephanie Crowley, a sleep researcher at Rush University Medical Center in Chicago.

"A 16- or 17-year-old might be able to stay awake later compared to a 10-year-old who will likely fall asleep on the couch watching TV," Crowley explains.

Most studies show a fairly consistent 9 1/4 hours sleep requirement. So there's a huge gap between what they're getting on an average school night and what they require.

Helene Emsellem, neurologist at George Washington University and medical director of the Center for Sleep and Wake Disorders

When a teen's propensity to fall asleep later is coupled with the early-to-rise school start times, most high school students end up accruing a "sleep debt" of five to 10 hours by the end of a school week.

And teenagers' typical habits on the weekend create even more chaos in their sleep-wake cycle.

"What the majority of adolescents do is they will try to recover their sleep on the weekends," Crowley observes. "And what usually will happen is they'll stay up late to socialize with friends and then sleep in in the morning."

But this sleep-wake pattern makes things worse for the teen, not better, Emsellem says.

"Even if you catch up by sleeping in late on your weekend mornings," she says, "by doing so, it makes it harder for you to fall asleep by 10 or 10:30 on Sunday night. And you start all over again, sleep restricted."

But Emsellem offers some suggestions for the weekends, based on her sleep research in the lab — and her personal experience of raising three daughters.

"As a parent myself, I feel like a criminal if I ask them to get up at 7:30 or 8 in the morning. But I do try to get them up by 9. And I encourage them to get some activity and some light exposure in the morning," she says.

Let There Be Not Much Light At Night

Light, Emsellem says, is a "drug that promotes wakefulness" in the morning, in the same way that darkness can promote sleep at night. In the evening, she recommends dimming and even turning off some lights in the house to minimize light exposure.

The teen should also try to make the transition to sleep time by taking a warm shower or doing some gentle stretching. Emsellem suggests that there be a lights-out time in the teen's bedroom during the school week and that they try to stick with it.

But if the teenager gets into bed and turns out the lights but cannot sleep, Emsellem says, just lying there in bed doing nothing is just as frustrating for the teen as it is for an adult. In that case, electronics can be helpful if used carefully — for example, soothing music or an audio book. But she suggests limiting such sleep aids to 30 minutes.

Making The Case For Sleep

Emsellem wants teenagers to understand what sleep does for them every night.

"I think it's important for teens to recognize that during the day, they're gathering information," she says. "But they're really not learning it till they sleep on it."

Another tip for teens: no caffeine — including chocolate — after midafternoon. Emsellem says caffeine stays in a teen's system for at least six hours.

Experts also recommend naps. Over the weekend, an hour or so can help a teen catch up on sleep. During the school week, naps should be short — 20 to 30 minutes — and are best taken during study hall or a break before midafternoon. Otherwise, they could interfere with nighttime sleep.

Naps can be particularly helpful when teens have a test in the afternoon. "Studies have shown they'll do better on their test with a nap midday," Emsellem says.

There's another advantage to an early afternoon nap: Teens will then have more energy and concentration to power through homework later in the evening.