Accessibility links
Nuclear Nations Turn To Natural Gas And Renewables As more details emerge about the damage at Japan's Fukushima Dai-ichi nuclear plant, governments around the globe are reassessing nuclear power. Japan and Germany have canceled plans to build new reactors and are searching for alternative sources of power. 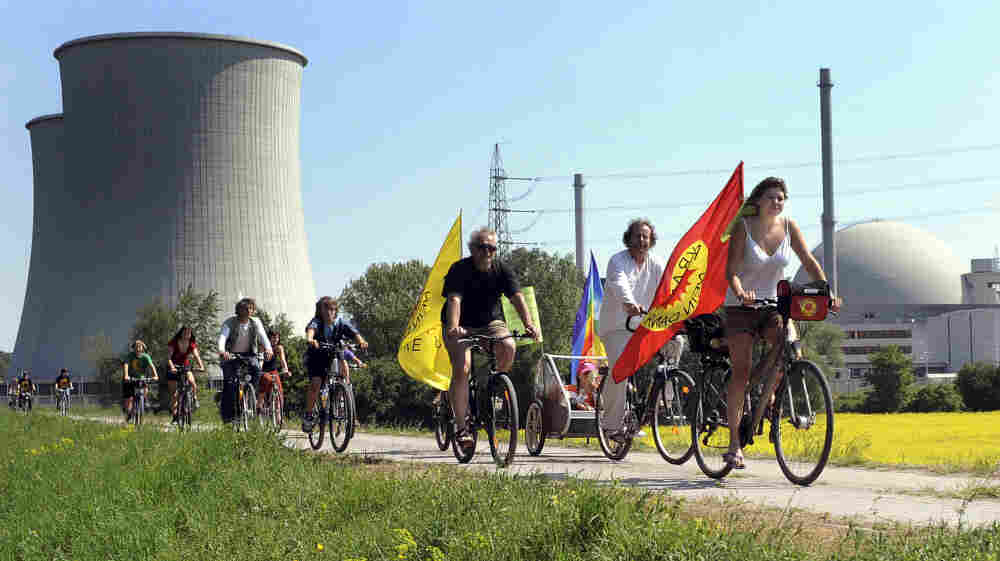 Protesters ride their bikes and hold flags reading "Nuclear power? No thanks" during a demonstration at the nuclear power plant of Biblis in Germany on April 25. Germany canceled plans to build new plants in the aftermath of the nuclear disaster in Japan. Thomas Lohnes/AP hide caption 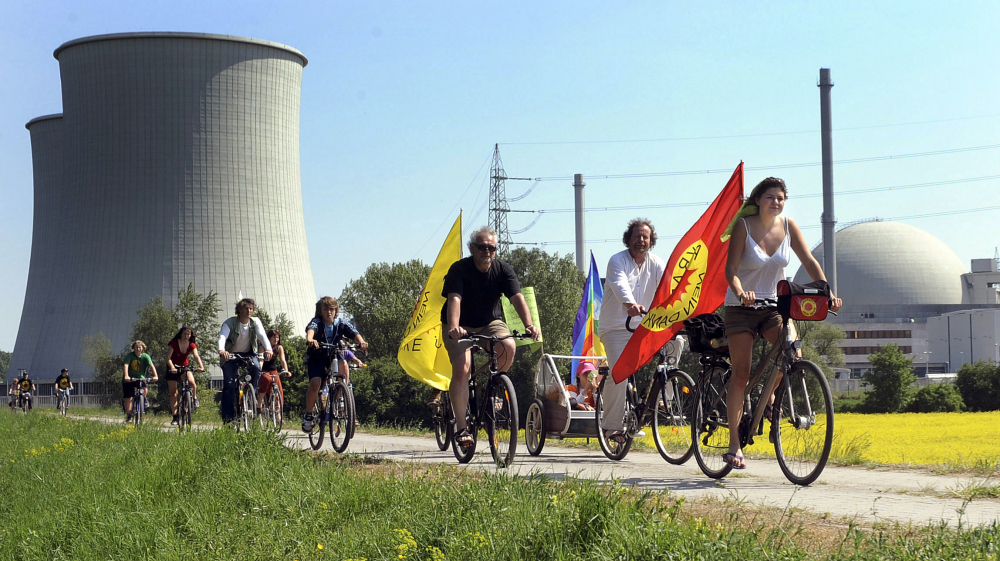 Protesters ride their bikes and hold flags reading "Nuclear power? No thanks" during a demonstration at the nuclear power plant of Biblis in Germany on April 25. Germany canceled plans to build new plants in the aftermath of the nuclear disaster in Japan.

Engineers probing the ruined nuclear reactors at Japan's Fukushima Dai-ichi plant are finding yet more damage. Not only did fuel melt in three reactors, but there's also a newly discovered hole in one reactor vessel, and radioactive water continues to leak at the site. That mess has led several governments to reassess nuclear power.

"Well, it's clear that nuclear power has been set back," says Richard Lester, who runs the nuclear engineering department at the Massachusetts Institute of Technology. "There'll be many years, I think, perhaps a decade, who knows, where we'll be dealing with the consequences of this accident."

France relies on nuclear power for 75.2 percent of its electricity; China, only 1.9 percent. Explore the countries with robust nuclear power programs, and those that hope to join the nuclear community.

What are those consequences? Japan now says it will not build those 14 reactors. Ditto for Germany — it's saying no new plants there, either. Other countries are rethinking nuclear plans as well.

That means Japan and Germany will have to find another way to make more electricity.

A Growing Source of Power

Philip Sharp, who runs the research group Resources for the Future, says that's likely to be natural gas. Luckily, there seems to be plenty around. "We really have discovered over the past three or four years this very large quantity of gas, and therefore it will not be very expensive relative to other fuels and therefore will become the most likely fuel for new electric power plants," Sharp says.

A lot of that new gas is in the U.S., especially in underground shale deposits. Economist Kevin Book with ClearView Energy Partners says Japan could be a huge market for American gas. There's a hitch, though.

"The problem is it can't leave right now," he says. "There's government policy and capacity that has to be put into place for the U.S. to participate. The problem is, if the U.S. doesn't participate, other countries will."

Book says the U.S. doesn't have facilities to liquefy gas to ship it abroad. Foreign suppliers do.

The Japanese government says it will make up the loss of its nuclear future with solar power and other renewable fuels. Germany plans to do the same — in fact, close to one-fifth of its energy already comes from renewable sources.

Says Book: "Germany has successfully mobilized renewables as a way to create jobs, and they have done it with such a continuity of success that they believe that not only is 40 percent renewables by 2020 possible — it's probably going to be a popular political program."

Japan is farther behind in renewable energy. The country may turn in part to diesel fuel to make electricity in the short term. That could push up world oil prices.

New Regulations In The U.S.?

In the U.S., nuclear plants provide one-fifth of all of the electricity. But no one has built a new plant in decades. It's cheaper to keep old plants running longer.

Ernest Moniz, head of the Energy Initiative at MIT, says a nuclear "renaissance" in the U.S. isn't likely anytime soon. "It's not the end of nuclear power, but it will cast a lot of uncertainty over the next years."

The Nuclear Regulatory Commission is reviewing whether to strengthen safety at American reactors. Moniz says if they do, it could raise the already high cost of building a new reactor.

"If new regulations come about that substantially impact the capital requirements or lead to a much more extended licensing and construction period, those could be quite detrimental to any new nuclear," Moniz says.

How far are we willing to go to tolerate those high risks?

Philip Sharp, Resources for the Future

"The main problem is that the NRC and the industry still believe that these types of events are so improbable that you don't have to spend a lot of money or time worrying about them," Lyman says. "And as a result, they are getting what they pay for, which are inadequate plans which may not work."

Lyman says severe weather or flooding could cut power to a reactor just as the Japanese earthquake and tsunami did. He says backup safety equipment should be designed and proven to survive the most extreme events.

Fukushima shows that there will always be some risk from nuclear reactors. For Philip Sharp at Resources for the Future, that presents the public with a big question: "To what degree [are] we as a people ... to accept that some of these things are high risk, and how far are we willing to go to tolerate those high risks?"

And the answer to that question could ultimately change the way the world makes electricity, and how much it costs.