Accessibility links
Shop For A Psychotherapist To Avoid The Lemons Researchers have solid evidence of what kind of psychotherapy works, particularly for common mental problems like depression and anxiety. But the public often doesn't demand the right treatments. Now some experts are urging patients to be more discriminating consumers of mental health care. 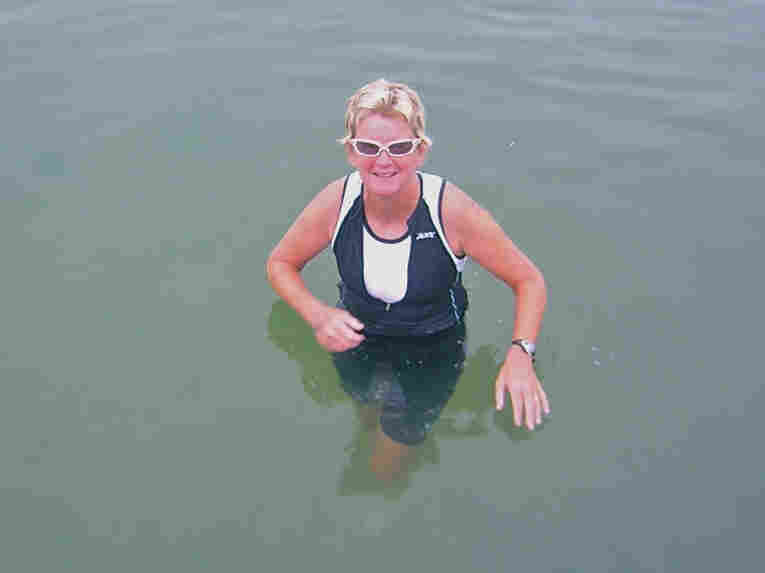 Janet Ohlsen, pictured here in 2009 after completing a triathalon, has battled depression, anxiety and bipolar disorder. After a long search for mental health care, Ohlsen found a psychotherapist with whom she clicked. Courtesy of Janet Ohlsen hide caption 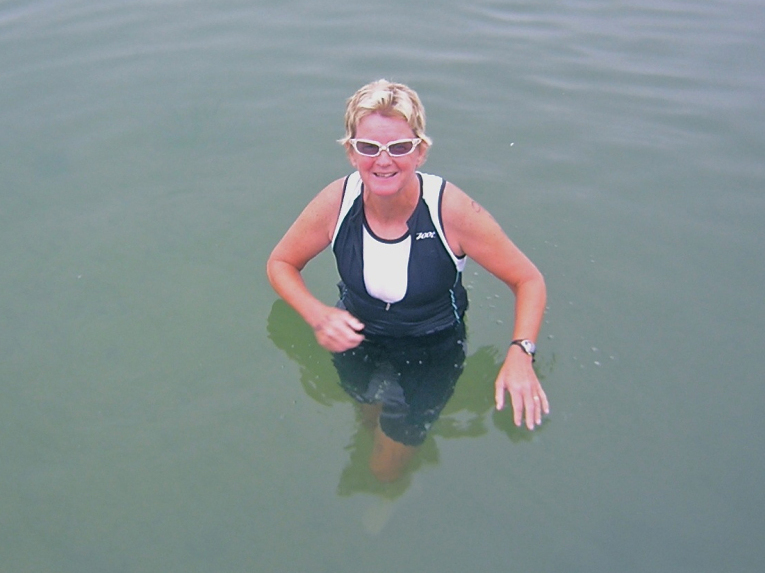 Janet Ohlsen, pictured here in 2009 after completing a triathalon, has battled depression, anxiety and bipolar disorder. After a long search for mental health care, Ohlsen found a psychotherapist with whom she clicked.

Turn on a TV talk show, and you'll think that everyone in America is in need of mental health counseling. But there are hundreds of different kinds of therapy out there, and it's hard to know which ones work.

Researchers have put a lot of effort into testing different forms of psychotherapy, and they have solid evidence of what works, particularly for common mental problems like depression and anxiety.

But despite that, people can't presume they're going to get the right psychotherapy, according to Alan Kazdin, a clinical psychologist who directs the Yale Parent Center and Child Conduct Clinic. That's partly because therapies don't have a lot of marketing money behind them, unlike new pharmaceuticals. As a result, "The public doesn't know about them and isn't demanding them," he says.

In the past decade, there has been a big push in the mental health community to use evidence-based therapies to treat common mental health problems like depression, anxiety disorder and obsessive-compulsive disorder. The STAR*D trial, for instance, found that cognitive behavioral therapy and interpersonal therapy were as effective as antidepressants in treating major depression.

Shop For Therapy Like You Shop For A TV

But not all therapists have adopted these treatments, and with hundreds of different forms of therapy offered, it's difficult at best for people to figure out what kind of therapy they need, and then find it.

People should be as practical-minded when they shop for therapy as they are when they shop for a flat-screen TV, Kazdin says. And they should ask therapists: Do you use an evidence-based treatment, which one, and how often have you used it?

National Alliance on Mental Illness has information on what families need to know about evidence-based practices.

The National Association of Cognitive-Behavioral Therapists lists therapists that meet certain standards for this evidence-based treatment.

The Association for Behavioral and Cognitive Therapies also has a therapist finder.

Depression and Bipolar Support Alliance has a "Find A Pro" service with therapists recommended by peers.

The American Counseling Association has information on how to find a professional counselor.

The Academy of Cognitive Therapy manages a therapist finder.

"People are now much better shoppers when they seek surgery in hospitals," Kazdin says. "And all we need here is just that same informed nonprovocative questioning about, 'I'm paying for a service and I'm suffering. Am I getting the best I can get?' "

Web resources can help identify treatments that have been tested and proven effective. A searchable database from the federal Substance Abuse and Mental Health Administration (SAMHSA) is a good place to start. So are advocacy groups like the National Alliance on Mental Illness or the Depression and Bipolar Support Alliance. Once you know what kind of therapies work, professional societies like the National Association of Cognitive-Behavioral Therapists can help find therapists who have specialized training.

But shopping can be a challenge when you're suffering.

'I Wasn't Sure Where To Turn'

Janet Ohlsen found that out. Three years ago, she started to spiral downward into depression, anxiety and bipolar disorder. She was dizzy and couldn't think straight. Once, she told her husband she was going to do laundry; instead, she disappeared into the woods near her home in Erieville, N.Y.

Her physician prescribed antidepressants, but she reacted badly to them and more than once ended up in the emergency room. She diligently researched her various diagnoses and discussed them with her doctor but still had a hard time finding treatment.

A friend who was a clinical social worker recommended a therapist who does psychodynamic therapy. "I was lucky in getting a good therapist right off the bat," Ohlsen says.

Ohlsen has assembled a team to help her manage her mental health: her primary care physician; a psychiatrist who prescribes medication; and her psychotherapist, whom she sees twice a week.

"Counseling is the biggest part of this whole recovery — finding someone you trust, someone you click with," Ohlsen says. She and the psychotherapist have been working together on negative thinking, which is a hallmark of depression.

A Psychiatrist's Prescription For His Profession

"I think a lot of people, mental illness or no, have a tendency to have immediate negative thoughts on everything," Ohlsen says. The therapist, she says, "forces me out of that."

She's now back to training for a triathlon and plans to help coach other women who are recovering from illness.

The Art Of Persuasion

Some therapists fear that the push for evidence-based techniques will restrict their ability to connect with their clients on a deeply human level, that they'll be doing cookbook therapy.

Scott Lilienfeld, a clinical psychologist at Emory University, says a good psychotherapist can do both. He's the author of the book 50 Great Myths of Popular Psychology: Shattering Widespread Misconceptions about Human Behavior and a frequent critic of ineffective or dangerous therapy. "Most good therapists are good listeners," he says.

That's critical, because psychotherapy done right is hard work. "A lot of psychotherapy is difficult," Lilienfeld says. "It involves getting people to change and try hard things, try new things that people have often been resisting. Part of the role of a good psychotherapist is persuasion. It's getting a person to understand why they should change."