Accessibility links
Workers Left Rattled By Final Shuttle Launches Endeavour is in orbit, but the workers who helped send it there are facing down-to-earth challenges, especially in the Sunshine State. For one former NASA contractor and his wife, space was the family business. 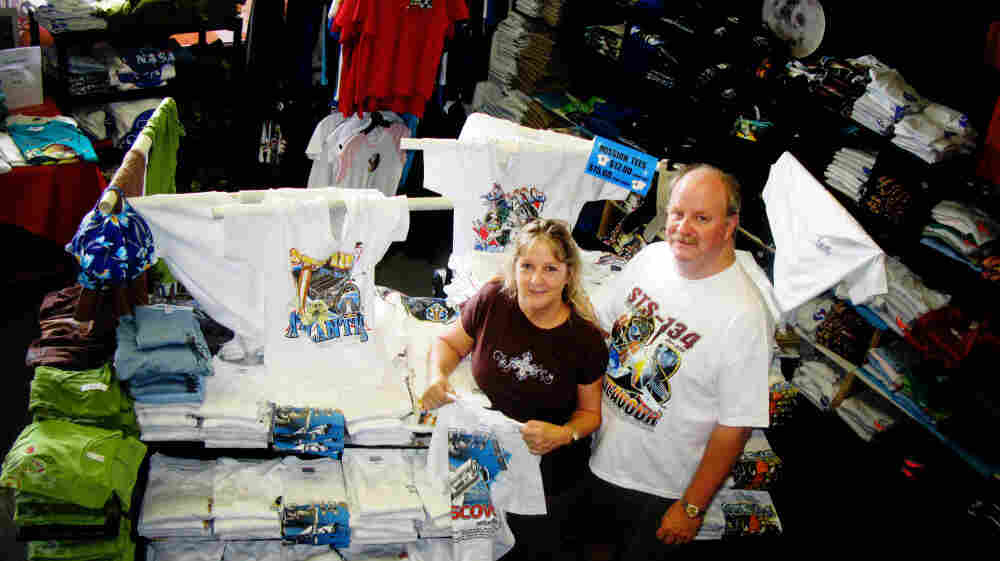 Brenda Mulberry runs a T-shirt and custom merchandise shop just a few miles from the southern gate of the Kennedy Space Center — close enough that when shuttle Endeavour rumbled into orbit Monday morning, it rattled the building.

But Endeavour's launch signified a different kind of shakeup for Mulberry's family and neighbors on eastern Florida's Space Coast. When it returns from its 16-day mission to the International Space Station, only one flight will remain before the shuttle program closes down for good, eliminating thousands of jobs — including that of Mulberry's husband, Gerry, a 31-year NASA contractor who was let go last month.

For the Mulberrys, space travel has been the family business — and an inherently unpredictable one from the start. Gerry, 52, spent most of his adult life working on the intricate system of protective tiles that shield the shuttle orbiters as they re-enter the atmosphere. Meanwhile, Brenda started her venture, Space Shirts, to cater to local aerospace customers and tourists. "We started this business in case he got laid off," Brenda says.

Now the Mulberrys are trying to answer the same question that has plagued the space program for years: What comes next?

"I'm probably too young not to do something else," Gerry says.

Brenda is frustrated by the decision to permanently ground the shuttles — "It's insane," she says — but she remains undaunted. Her motto: "Never underestimate the power of a T-shirt."

Gerry worked on the shuttle's tile system for a series of NASA contractors starting in 1980. The last contractor was United Space Alliance, a Boeing-Lockheed Martin joint venture formed to help manage much of the shuttle program's routine operations. Last week, USA announced its sixth round of cuts since October 2009 — 2,800 more people, about 1,900 of whom will be in Florida.

Gerry was among those laid off in those earlier rounds. His last day on the job was April 8 — just before the space agency marked the 30th anniversary of the shuttle's maiden voyage.

We thought we had Constellation. Now it's sad that NASA doesn't seem to have direction.

Bits of NASA and shuttle history line the walls and even the ceilings of his wife's shop. Photos and memorabilia hang everywhere, and the shelves are stacked high with shirts and other merchandise celebrating the space program's triumphs and paying tribute to its tragedies. Items on the walls are signed by astronauts — including the napkin on which Apollo 11 astronaut Buzz Aldrin personally sketched out his idea for a shirt commemorating the 40th anniversary of his historic moon landing.

Brenda originally started her business to manufacture diving gear. After she began providing screen-printing services to her diving clients, Brenda switched gears to focus on the area's aerospace community. The tourist business came later, when Space Shirt began selling mission-related T's to the thousands of people who came to see shuttle launches — as many as 30,000 shirts for one 1998 launch, when huge crowds came to see Mercury astronaut John Glenn return to space aboard the shuttle Discovery. Even the crew of Air Force One, which brought President Bill Clinton to that launch, called Brenda to customize a T to mark the occasion.

Brenda's Merritt Island store was packed after Endeavour's launch Monday. And she expects to hold on to a portion of Space Shirt's tourist business after the shuttles stop flying this summer, especially now that NASA announced plans to put the Atlantis on permanent display at the Kennedy Space Center's nearby visitors complex. Apollo-era merchandise does well in the store, too. And there are online sales to help make up for the missing launch crowds — an estimated 400,000 people showed up on Monday and probably far more for the program's final flight.

Space Shirts attracts a broad mix of vacationers and NASA old-timers, particularly when a launch is scheduled. That was certainly the case two weeks ago, when the space agency scrubbed a previous attempt to launch Endeavour. President Obama also paid NASA's spaceport a visit that day, a move that certainly rankled some of the NASA faithful who were shopping at Space Shirts.

A few blamed the president for canceling Constellation, a chronically underfunded NASA program that was supposed to replace the shuttle and return astronauts to the moon by 2020. It also would have provided jobs for local space workers who were in the process of losing their jobs — such as the United Space Alliance contractor who showed Obama and his family around the orbiter Atlantis.

"He's got some nerve coming here," one customer said that day.

NASA's current woes predate the Obama administration. The decision to end the shuttle program once construction of the International Space Station was completed was made during the Bush administration, after the Columbia accident in 2003. But many NASA contractors and employees hoped the moon missions that were supposed to come next would give the space agency a renewed purpose.

Gerry was among them. "We thought we had Constellation," he says. "Now it's sad that NASA doesn't seem to have direction."

Like many of his former co-workers, Gerry also is skeptical of the president's interest in contracting with privately financed ventures to eventually develop new spacecraft to transfer astronauts to the space station on a for-hire basis.

"I don't know if they're going to be able to do what they say they're going to do," Gerry says, recalling that even NASA was never able to fully deliver on the shuttle's original vision of providing routine, economical access to space. "We thought we were going to launch shuttles every two weeks."

Gerry was familiar with the ups and downs of the space business before he lost his job. He was laid off the first time after the 1986 Challenger accident grounded the remaining shuttle fleet for more than 2 1/2 years.

Gerry and Brenda were expecting their first child at the time, so he worked briefly for defense contractor Martin Marietta on an Air Force program before returning to his old job at Kennedy. The work was interesting and helped pay the bills, but it still felt like a letdown after his shuttle work.

"It didn't have the thrill of human spaceflight," Gerry says. "There's not much more you can do above that."

Now the pressure is on again. With twins still in high school and college costs looming, Gerry and Brenda are clearly paying attention to a very different kind of countdown.

Gerry is actively applying for work that will keep him in the aerospace industry. Meanwhile he spends time at Space Shirts, making deliveries for Brenda and finding other ways to be helpful. Former co-workers stop by regularly, and he is surrounded by reminders of his work on the shuttles.

"A lot of guys we worked with were right out of high school — working on a space shuttle," Gerry says. "Now we don't know what to do. It's all we've done."