Accessibility links
First Listen: Cast Recording, 'The Book Of Mormon' The album makes for a remarkably satisfying encapsulation of an entertainment that'll play to the tourists in New York for years, and will almost certainly be touring to a theater near you before long. 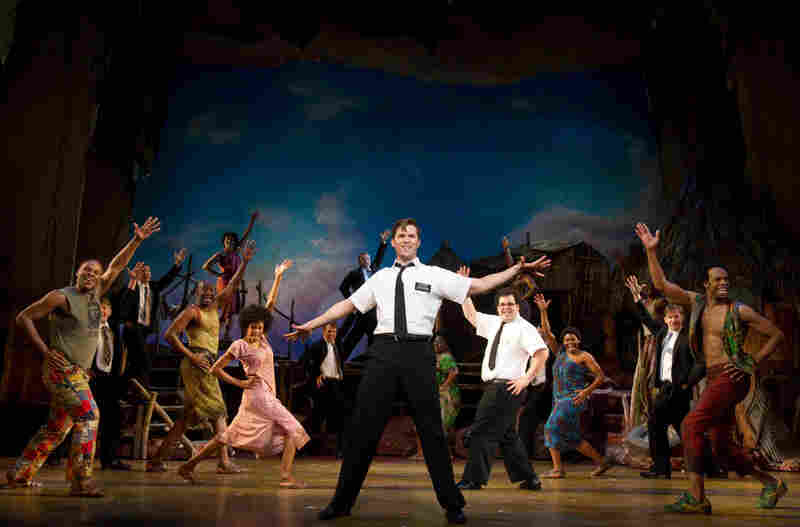 John Marcus/Courtesy of the artist

Hear From The Creators

'Book Of Mormon' Creators On Their Broadway Smash May 9, 2011

The sheer filthiness of The Book of Mormon shouldn't surprise anyone: Broadway's biggest new hit came from the minds behind South Park and Avenue Q, both shining examples of cheerful modern smut. With that provenance, (un)serious laughs were pretty much a given.

What wasn't so sure a thing — even when you remember how much fun the showtune parodies in the South Park movie were — was that it would work as a musical. Broadway musicals don't work like movies: Songwriting and show-building are both part science and part alchemy, and this time South Park's Trey Parker and Matt Stone were working not with veteran hit-writer Marc Shaiman, but with Robert Lopez, whose success with Avenue Q involved another collaborator entirely.

But not since Shaiman's Hairspray has a Broadway score been so ridiculously infectious from its very first moments. (The ding-dong delights of "Hello," with its doorbell chimes and peppy Sousa-march orchestrations, are downright intoxicating.)

And not since The Producers has a creative team had so much fun both sending up and celebrating the corny, open-hearted glories of the musical comedy form. It's one thing to write a hellfire-tempting parody of a gigantic target like "Hakuna Matata," as these guys do in "Hasa Diga Eebowai," whose title translates to an unprintably blasphemous bit of faithful-baiting. It's another level of fanboy geekery entirely to wrap up your first act with a knowing number like "Man Up," a to-the-footlights rouser that mocks rock operas from Rent to Rock of Ages in one full-throated measure and hat-tips an art-musical landmark like Jason Robert Brown's Songs for a New World in the next. It navigates the transitions between styles as confidently as any Tunick, too; this is confident, witty pastiche, from a team that knows what makes good Broadway songs and why people respond to them. And the performances on the cast album, due May 17 in digital formats and June 7 in stores, are first-class — polished, energetic turns from little-known names who've clearly written their tickets with this show.

The real miracle of The Book of Mormon, though, is how solid the musical storytelling is. The album makes for a remarkably satisfying encapsulation of an entertainment that'll play to the tourists in New York for years, and will almost certainly be touring to a theater near you before long.

You'll want to see the whole shebang in one place or another, too. Much has been made of the essential sweetness of The Book of Mormon, and that's how it strikes me; the show cocks a skeptical eye at situations and belief systems, but its jibes aren't malicious, and it never mocks the value of faith. It also loves its characters — which means, regardless of how unlikely it may seem, that a wide range of audiences will, too.