Accessibility links
German Boardrooms Lack Women. Can Quotas Help? Not one of Germany's top 100 companies has a female CEO, and women make up only 2.2 percent of their executive boards. Some businesswomen and legislators have proposed a quota system to remedy the imbalance, but some feel Germany's corporate culture isn't ready to join countries like France in embracing quotas. 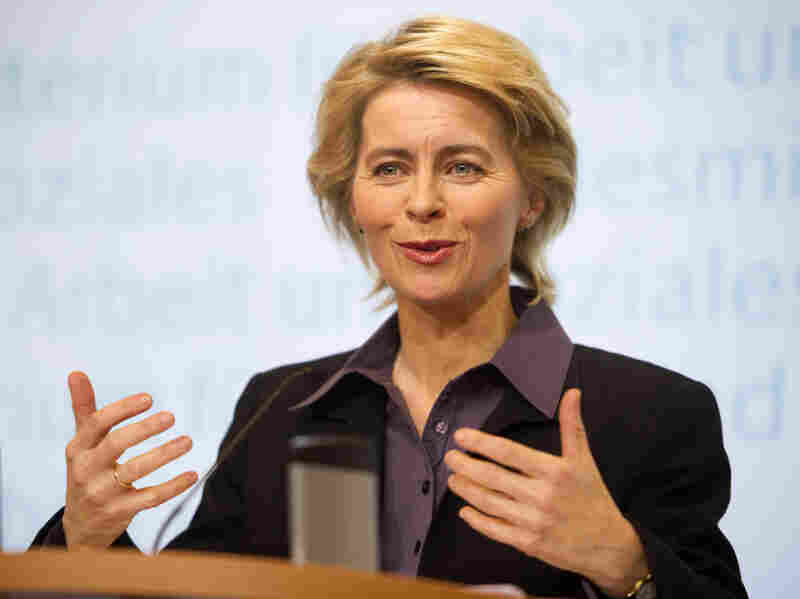 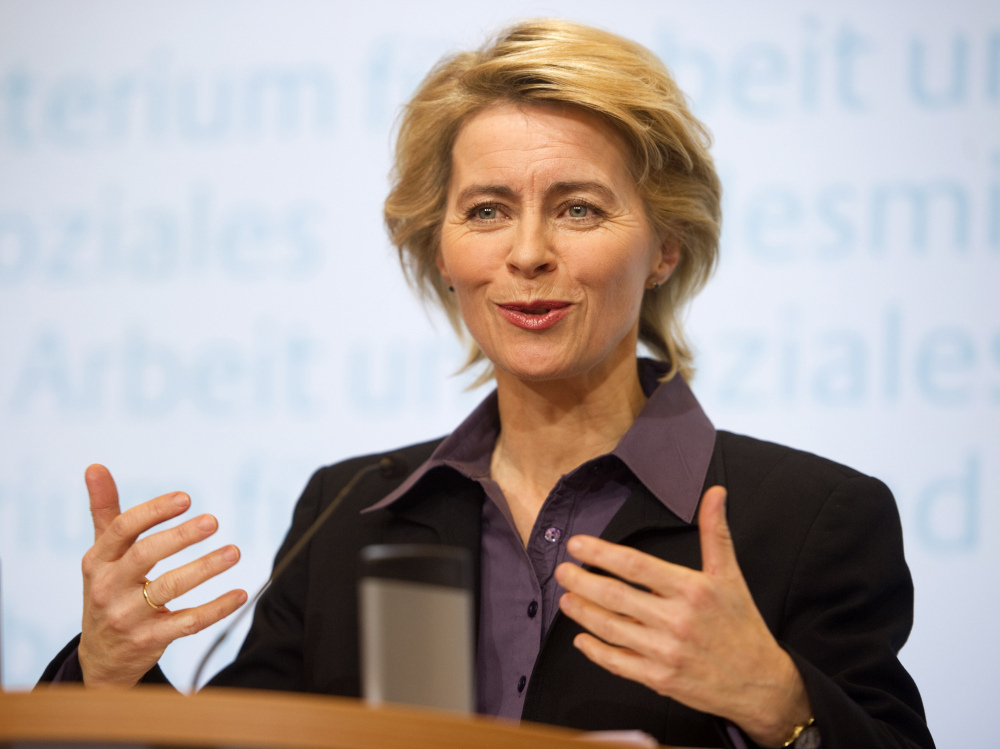 A recent study in Germany shows that for women, business boardroom doors remain largely shut. They constitute a mere 2.2 percent of the executive boards of Germany's top 100 companies. And not one of those companies has a female CEO.

The figures have prompted meetings between government and business leaders on how to improve gender equity in the boardroom and in corporate leadership. But even the female members of Chancellor Angela Merkel's Cabinet are divided on how to remedy the imbalance.

In the heart of Berlin's central business district, about two dozen businesswomen wielding placards recently gathered to catch the attention of the pinstripe-suited men and well-dressed women passing by. Their placards feature a woman with a mustache and read: "Is this how I get to the top?"

"We've had it up to here with the various voluntary agreements, and now we demand that the government finally does something about the absence of women in top jobs and the boardroom," says Jenny Huschke, a 42-year-old demonstrator. She is the equal rights federal representative for the DGB, the Confederation of German Trade Unions.

Women In The Boardroom

A Deloitte study compares the percentage of women serving on corporate boards in a dozen countries, half of which have laws or pending legislation setting quotas for membership by gender.

She's not entirely comfortable with the notion of mandatory gender quotas, but she sees no viable alternative after voluntary agreements reached 10 years ago between business leaders and the former government failed to boost the number of women in German boardrooms.

"It's not as if we desperately want a quota," she says. "But it is an instrument with which we can achieve parity."

A recent study by the German Institute for Economic Research shows that out of more than 900 board members that make up Germany's top 200 companies, only 29 of them are women. The study showed that Europe's largest economy lags behind China and India — as well as much of the West — in matters of corporate equal opportunity.

The study prompted the government to host talks with members of the so-called DAX 30, Germany's 30 leading companies listed on Frankfurt's stock index.

One member is Deutsche Bank, whose CEO, Josef Ackermann, recently welcomed the idea of more women in the boardroom, saying it would make it "prettier and more colorful." He was ridiculed in the media for the comment, but to many in Germany, the remark underscored that Germany's corporate culture is not ready to join France, Spain, the Netherlands and Norway in embracing legally binding gender quotas for the boardroom.

Meanwhile, government ministers are sharply at odds over how to improve things. Family Minister Kristina Schroder recently floated the idea of a voluntary, flexible quota that each company would set. But fellow Cabinet member Ursula von der Leyen, the labor minister, is firmly opposed to voluntary agreements.

"I expect more. I want to see concrete figures and results from the DAX top 30 post-haste," von der Leyen says. "Otherwise we will start negotiating with legal measures."

In her new book The Cowardice of Women, Mika partly blames women for giving up careers to look after the kids. Despite generous 12-month, state-subsidized paternity leave, it's still overwhelmingly Germany's women who put their careers on hold.

Mika's left-leaning paper introduced its own 50/50 company-wide gender quota in the 1980s, which she readily admits she profited from. While Mika rejects the idea that her success was the result of the quota alone, she says until Germany's business culture changes, a quota may be the only solution.

"Men support each other, and although it's not called a male quota, it works like a quota, and a 100 percent quota at that," she says. "And then, I'm sorry to say, you get some really naive women saying, 'We don't want a quota' — as if men, de facto, didn't profit from it themselves."

With Germany's economy booming again, it's not clear whether there is much appetite now for change in its male-dominated business world. What is clear is that after more than a decade of false promises, it may take more than business-led self-regulation to boost women's numbers on corporate boards.