Accessibility links
Anxiety Grows As Egypt Moves Toward Elections In Egypt, political parties are frantically trying to organize, register and make themselves known before elections scheduled for this fall. But there is increasing worry that lawlessness and sectarian strife could lead ordinary Egyptians to favor postponing the revolution in favor of stability. 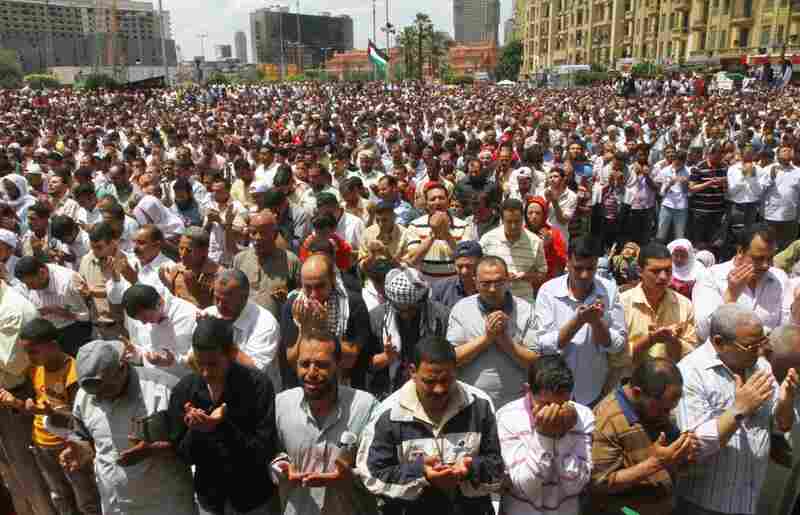 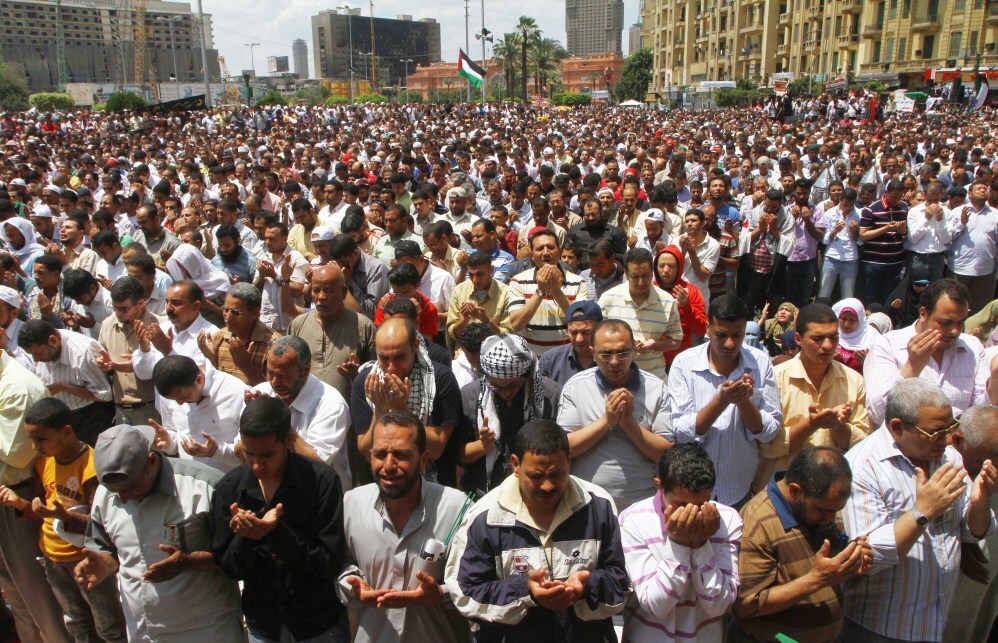 Egyptians say Friday prayers at a rally in Cairo's Tahrir Square on Friday. The rally called for national unity after attacks on Egyptian churches.

In Egypt, political parties are frantically trying to organize, register and make themselves known before elections scheduled for this fall.

In addition to the short timeline, people are increasingly worried about lawlessness and sectarian strife that could lead ordinary Egyptians to support postponing the revolution in favor of stability.

Decades of repression and corruption have left Egyptians in all walks of life with deep scars and a hunger for justice.

At the Cairo Medical Union recently, doctors gathered to prepare for a strike. Pediatrician Ahmed Baht said the No. 1 demand is to keep the revolution going, which for the doctors means ousting the health minister and his colleagues, who Baht says are irrevocably tainted by their long ties to the old, corrupt Mubarak regime.

"We want to remove this gang because they are the same men who shared for a long time in the worst Cabinet of health in Egypt and all over the modern history," he said.

In an office building not far away, Egyptians waited to sign up at the launch of yet another new political party — the Justice Party. It joins a slew of other moderate, secular parties: the Popular Alliance, the Free Egyptians, the Democratic Labor Party and many others.

Ehab El Kharrat, a psychiatrist, helped found the Egyptian Social Democratic Party. He said like other center and left parties, his group is attracting a lot of civil society leaders and intellectuals.

But the key to success, he believes, will be their effort to reach out to ordinary Egyptians — the ones who don't want to hear about separating religion and state, but also have their doubts about Islamist groups such as the Muslim Brotherhood.

"Most of the villagers ... find themselves religious, but they find the Muslim Brotherhood a little bit ... weird. This is not us. So they are joining us, and they are looking for us," he said. "How fast will they find us and how fast will we be able to organize ourselves is the issue."

But if the key to the Arab uprisings was breaking the wall of fear that kept autocratic regimes in place, then Egyptians are right to be worried these days, because fear is returning.

Rising street crime in the absence of a strong police presence has increased uncertainty about where the revolution is heading. Even more chilling has been the sectarian bloodshed between Muslims and Coptic Christians that left more than a dozen people dead earlier this month.

Large crowds gathered at Tahrir Square on Friday to demand an end to sectarian strife and a return to the rule of law.

Hussein, a teacher at Al-Azhar University, said remnants of the Mubarak regime were probably behind the sectarian violence, hoping to derail the revolution.

"Some people try to make some problems against Muslims and Christians, but we are one. The Muslims and the Christians are one!" Hussein said.

Others have suggested that Saudi Arabia is supporting the hard-line Salafists in Egypt, who were blamed for provoking the sectarian violence.

Analyst Emad Gad at the Al-Ahram Center for Political and Strategic Studies says chaos in Egypt now would give regimes such as the Saudis a stronger argument for quelling discontent at home.

For now, against a backdrop of growing anxiety and uncertainty, Egyptians are trying to hang on, get organized and shepherd their revolution into the next, electoral phase.

Egypt Eyes Neighbors Anew After Mubarak's Ouster May 12, 2011
After Deadly Clashes, Egypt's Christians On Edge May 9, 2011