Accessibility links
Other Allegations Emerge Against IMF Chief Dominique Strauss-Kahn, the head of the International Monetary Fund, was denied release on bail Monday on charges of trying to rape a hotel maid as allegations of other, similar attacks by the 62-year-old began to emerge.

Other Allegations Emerge Against IMF Chief

Other Allegations Emerge Against IMF Chief 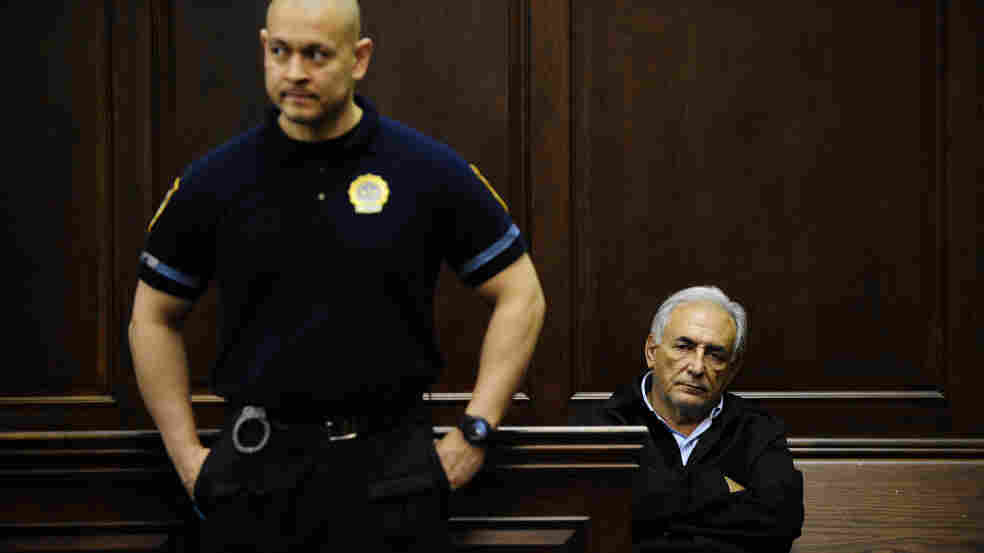 Haggard and unshaven after a weekend in jail, the chief of the International Monetary Fund was denied release on bail Monday on charges of trying to rape a hotel maid as allegations of other, similar attacks by Dominique Strauss-Kahn began to emerge.

In France, a lawyer for a novelist said the writer is likely to file a criminal complaint accusing Strauss-Kahn of sexually assaulting her nine years ago. A French lawmaker accused him of attacking other maids in previous stays at the same luxury hotel. And in New York, prosecutors said they are working to verify reports of at least one other case, which they suggested was overseas.

Making his first appearance on the sex charges, a grim-looking Strauss-Kahn stood slumped before a judge in a dark raincoat and open-collared shirt. The 62-year-old, silver-haired Strauss-Kahn said nothing as a lawyer professed his innocence and strove in vain to get him released on bail.

The judge ruled against him after prosecutors warned that the wealthy banker might flee to France and put himself beyond the reach of U.S. law like the filmmaker Roman Polanski.

"This battle has just begun," defense attorney Benjamin Brafman told scores of reporters outside the courthouse, adding that Strauss-Kahn might appeal the bail denial.

Strauss-Kahn is accused of attacking a maid who had gone in to clean his penthouse suite Saturday afternoon at a luxury hotel near Times Square. He is charged with attempted rape, sex abuse, a criminal sex act, unlawful imprisonment and forcible touching. The most serious charge carries five to 25 years in prison.

Strauss-Kahn, who has headed the international lending agency since 2007, was in New York on personal business and was paying his own way, so he cannot claim diplomatic immunity, the IMF said. He could seek that protection only if he were conducting official business, spokesman William Murray said. The agency's executive board met informally Monday for a report on the charges against Strauss-Kahn, its managing director.

The French newspaper Le Monde, citing people close to Strauss-Kahn, said he had reserved the $3,000-a-night suite at the Sofitel hotel for one night for a quick trip to have lunch with his daughter, who is studying in New York.

The hotel maid, identified as a 32-year-old immigrant from Guinea and a mother of two, told authorities that she thought the suite was empty but that Strauss-Kahn emerged from the bathroom naked, chased her down a hallway, pulled her into a bedroom and dragged her into a bathroom, police said.

He seized her breasts, tried to pull down her pantyhose, grabbed at her crotch and forced her to perform oral sex on him during the encounter at about noon, according to a court complaint. She ultimately broke free, escaped the room and told hotel staffers what had happened, authorities said. She was treated at a hospital for minor injuries.

Brafman said defense lawyers believe the forensic evidence "will not be consistent with a forcible encounter." Defense lawyers wouldn't elaborate, but Brafman said "there are significant issues that were already found" that make it "quite likely that he will be ultimately be exonerated."

Prosecutors asked the judge to hold Strauss-Kahn without bail, noting that he lives in France, is wealthy, has an international job and was arrested on a Paris-bound plane at Kennedy Airport. He had left the Sofitel hotel before police arrived, leaving his cellphone behind, and appeared hurried on surveillance recordings, authorities said.

Prosecutors said they couldn't force his return from France if he went there.

"He would be living openly and notoriously in France, just like Roman Polanski," said Chief Assistant District Attorney Daniel Alonso, referring to the film director long sought by California authorities for sentencing in a 1977 child sex case. Swiss police arrested him in 2009, but he was freed last year when Switzerland declined to extradite him to the United States.

Defense lawyers suggested bail be set at $1 million and promised that the IMF managing director would remain in New York City. His lawyers said Strauss-Kahn wasn't trying to elude police Saturday: The IMF head rushed out of the hotel at about 12:30 p.m. to get to a lunch date with a family member, then caught a flight for which he had long had a ticket, according to Brafman and fellow defense lawyer William W. Taylor.

"This is not a case of someone who commits a crime, runs to the airport and jumps on the first available plane," Brafman said.

Still, Criminal Court Judge Melissa C. Jackson said the fact that Strauss-Kahn was on a plane when arrested "raises some concerns." She ordered him jailed at least until a court proceeding on Friday. 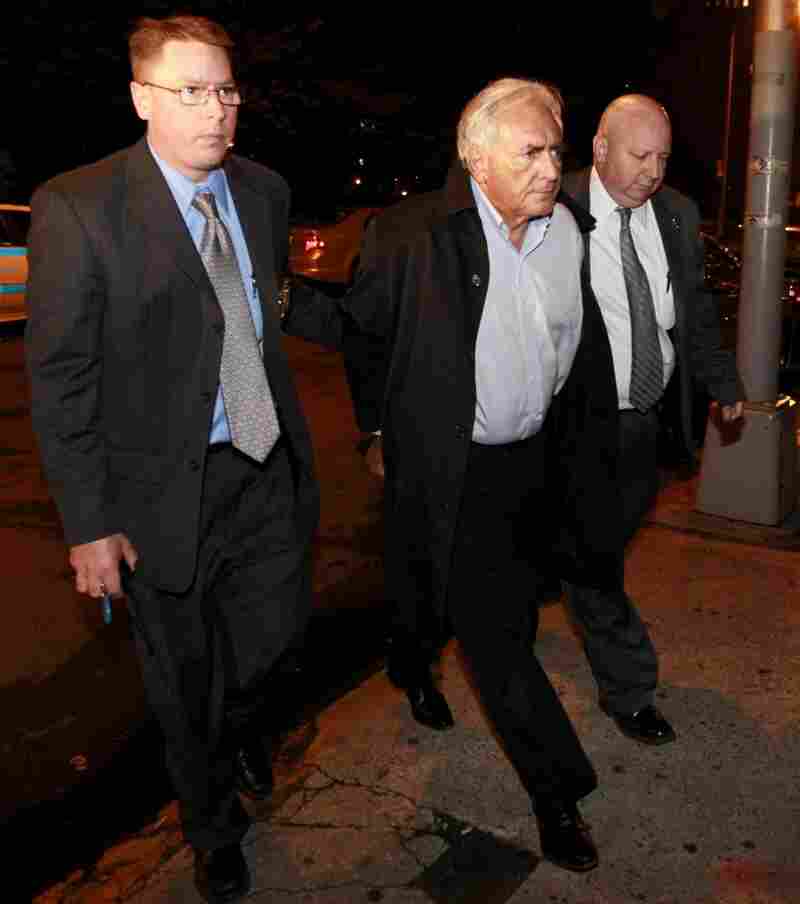 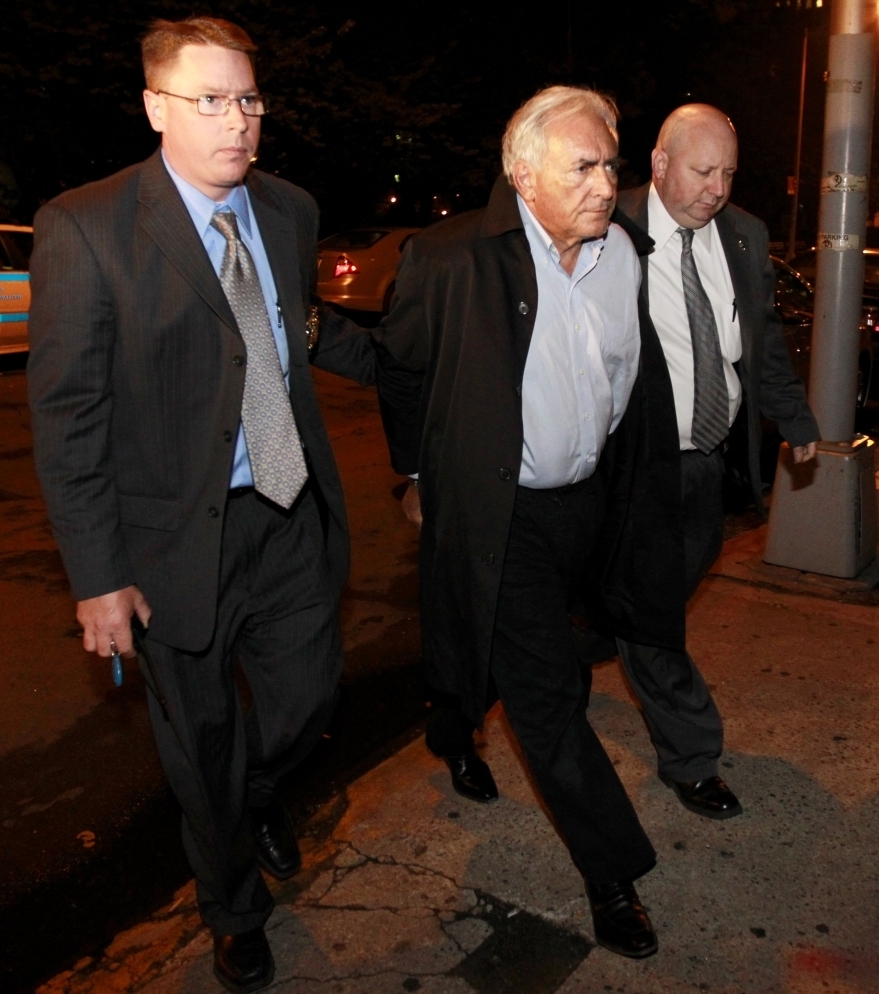 Strauss-Kahn became head of the IMF at one of its most challenging times. The organization has played a lead role in helping to bail out Greece and other struggling European countries.

Eswar Prasad of Cornell University says Strauss-Kahn has negotiated with European officials and persuaded them to back the bailouts.

"Among senior international policymakers, like finance ministers and central bank governors, Dominique Strauss-Kahn really had the status of a rock star," Prasad says. "Unlike previous managing directors, he was really seen as the first among equals, as somebody who had the stature to essentially bring them all together."

The IMF issued a statement this weekend saying it remained fully functioning and operational. And Prasad, who is himself a former IMF official, said he had no doubt that was true.

"Most of the work the fund does, including its lending operations, are mostly technical matters. And for all those technical matters, the staff are perfectly equipped to do this on their own," Prasad says. "But the big question is what happens when decisions have to be taken that have more than an economic element to them and that have a very large political element to them."

For the time being, Strauss-Kahn will be succeeded by his No. 2 man, American John Lipsky. But Lipsky has said he plans to leave the agency this summer.

According to the 2000 biography Les Vies Cachees de DSK by Vincent Giret and Veronique Le Billon, Strauss-Kahn's wife, Anne Sinclair, was one of France's highest-paid TV journalists before she gave up her job to avoid a possible conflict of interest when her husband became a government minister in 1997. The biography says Sinclair is also a wealthy heiress, whose grandfather Paul Rosenberg was a prominent modern art dealer before the Second World War.

French newspapers have inventoried the couple's real estate holdings, which reportedly include a six-room apartment in Paris' chic 16th arrondissement; a 240-square-meter apartment on the luxurious Place des Vosges; a home in Marrakech, and a house in Washington.

Strauss-Khan will be held in protective custody in the city's Rikers Island jail because of his high profile, said city Correction Department spokesman Stephen Morello. Unlike most prisoners, who share 50-bed barracks, Strauss-Kahn will have a single-bed cell and eat all his meals alone there. Also, when he is outside his cell, he will have a prison-guard escort.

Meanwhile, a lawyer for 31-year-old French novelist Tristane Banon said she will probably file a complaint alleging Strauss-Kahn sexually attacked her in 2002. Lawyer David Koubbi told French radio RTL that Banon hadn't pressed her claim earlier because of "pressures" but would do so now because "she knows she'll be taken seriously."

The Associated Press is identifying Banon as an alleged victim of sexual assault because she has gone public with her account.

Banon talked about the incident on French TV in 2007 but the station bleeped out Strauss-Kahn's name.

She said she had gone to an apartment to interview Strauss-Kahn when he began trying to remove her clothes, but she was able to fight him off.

Banon, whose mother is like Strauss-Kahn a Socialist party official, said the incident in New York had freed her to talk about the assault.

A French lawmaker from a rival political party also alleged, without offering evidence, that Strauss-Kahn had victimized several maids during past stays at the Sofitel near Times Square.

The hotel issued a statement calling conservative lawmaker Michel Debre's claims "baseless and defamatory." Sofitel management "has had no knowledge of any previous attempted aggressions," the hotel said, adding that it had set up a hotline for workers to report incidents more than a year ago.

McConnell, the assistant district attorney, said in court Monday that New York authorities are working to verify at least one other case of "conduct similar to the conduct alleged." When the judge asked whether the potential other incident occurred in the United States, McConnell said he "believed that was abroad."

Strauss-Kahn's lawyers said they had no immediate response to the allegations emerging from overseas.

In France, defenders of Strauss-Kahn, a former finance minister who had topped the polls as a possible candidate in presidential elections next year, said they suspected he was the victim of a smear campaign.

NPR's Jim Zarroli contributed to this report, which contains material from The Associated Press