Accessibility links
As U.S. Military Exits Iraq, Contractors To Enter All U.S. combat forces are scheduled to leave Iraq by year's end, but the State Department will still need security. So it's planning to add thousands more private contractors. Critics doubt that there will be enough oversight and say the task should be left to trained government workers. 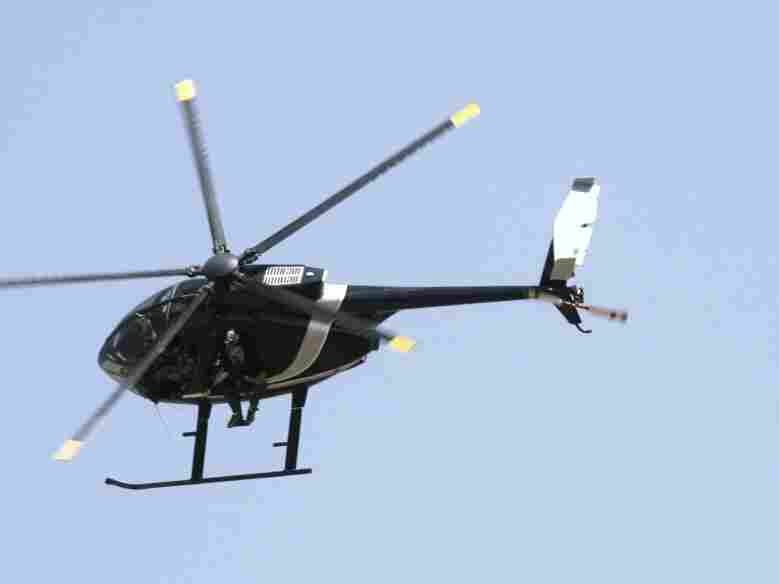 Blackwater security contractors are seen in a helicopter in Baghdad in 2007. The company changed its name to Xe in 2009, amid controversy surrounding the killing of 17 Iraqi civilians in 2007. Khalid Mohammed/AP hide caption 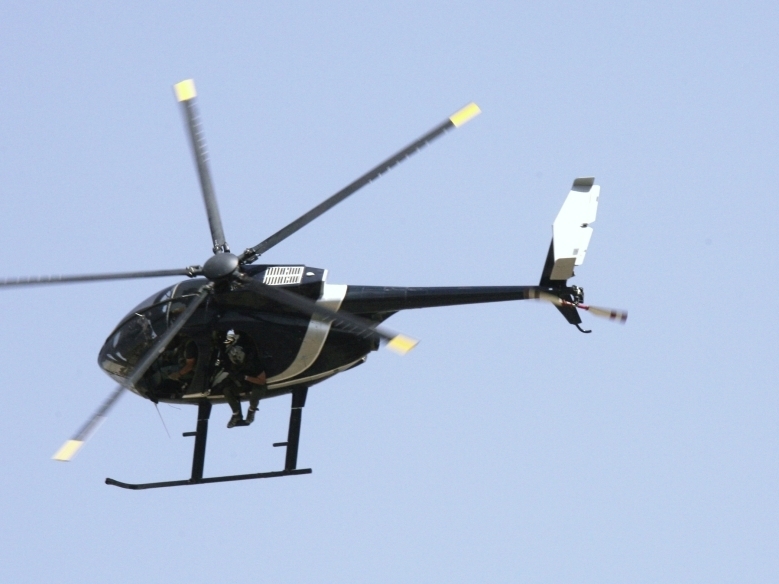 Blackwater security contractors are seen in a helicopter in Baghdad in 2007. The company changed its name to Xe in 2009, amid controversy surrounding the killing of 17 Iraqi civilians in 2007.

A U.S. Army helicopter brigade is set to pull out of Baghdad in December, as part of an agreement with the Iraqi government to remove U.S. forces. So the armed helicopters flying over the Iraqi capital next year will have pilots and machine gunners from DynCorp International, a company based in Virginia.

On the ground, it's the same story. American soldiers and Marines will leave. Those replacing them, right down to carrying assault weapons, will come from places with names like Aegis Defence Services and Global Strategies Group — eight companies in all.

All U.S. combat forces are scheduled to leave Iraq by year's end, but there will still be a need for security. That means American troops will be replaced by a private army whose job will be to protect diplomats.

Already, the State Department is approving contracts, but there are questions about whether it makes sense to turn over this security job to private companies.

Security For The State Department

"I think the number of State Department security contractors would be somewhere in the area of between 4,500 and 5,000," Kennedy says.

That's roughly the size of an Army brigade, and double the number of private security contractors there now.

The State Department has an in-house security force, but it has just 2,000 people to cover the entire world. They handle everything from protecting Secretary of State Hillary Clinton to guarding embassies and consulates.

Kennedy says for a tough job like Iraq, he needs help.

"In a situation like this, where you have a surge requirement that exceeds the capability of the State Department, it is normal practice to contract out for personnel to assist during those surge periods," he says.

More on this story

The most notorious was the shooting of 17 Iraqi civilians at a Baghdad traffic circle in 2007. Guards with the private security contractor Blackwater opened fire while protecting a State Department convoy. A U.S. investigation later found there was no threat to that convoy.

Among those contractors who will be working in Iraq next year is International Development Services, a company with links to Blackwater, now renamed Xe Services.

State Department officials say they've made changes since that deadly incident in Baghdad. There are now more State Department supervisors; contractors must take an interpreter on all convoys; and companies can be penalized for poor performance.

But Grant Green, a member of the Commission on Wartime Contracting created by Congress, says that's not enough. He told a House panel recently that the State Department still isn't ready to assume responsibility for Iraq next year.

"They do not have enough oversight today to oversee and manage those contractors in the way they should be," Green says.

Kennedy of the State Department disputes that contention. He says there are plenty of supervisors who shadow these private contractors.

"We have trained State Department security professionals in every convoy in every movement in Iraq," Kennedy says.

But that raises a broader question: Should the State Department be turning over these inherently military jobs to private contractors?

You might as well beef up the Bureau of Diplomatic Security ... rather than assuming the private contractors will do a good job because you've written a good contract.

Pratap Chatterjee, of the Center for American Progress

Pratap Chatterjee of the Center for American Progress doesn't think so. Chatterjee, who writes about contractors, says these are government roles that demand accountability to the public. He has another idea about what should be done.

"You might as well beef up the Bureau of Diplomatic Security," he says.

That means greatly expanding the State Department security force of 2,000 that now covers the entire world.

"And make sure you have the capability for future operations in countries like Libya or wherever it is, rather than assuming the private contractors will do a good job because you've written a good contract. That's just not good enough," Chatterjee says.

It may be impractical to hire thousands more State Department security personnel. Stuart Bowen, the special inspector general for Iraq reconstruction, says today's wars are different — they're lengthy and ambitious. So it doesn't make sense to build a large force to protect diplomats.

"I don't expect that the United States is going be engaged in a stabilization operation of the size of either Iraq or Afghanistan in the near future," Bowen says.

That may be true. But for the time being, private security contractors — thousands more — will soon be on the job in Iraq.