Accessibility links
From Monkey Bars To The Money Playground At Finance Park, eighth-graders are playing grown-ups — for class credit. The park is a real world mock-up where schools bring kids to learn financial literacy. The teens shop for groceries, buy cars at the dealership, even pick cable plans at a faux Verizon Store — all while trying to stay on a budget. 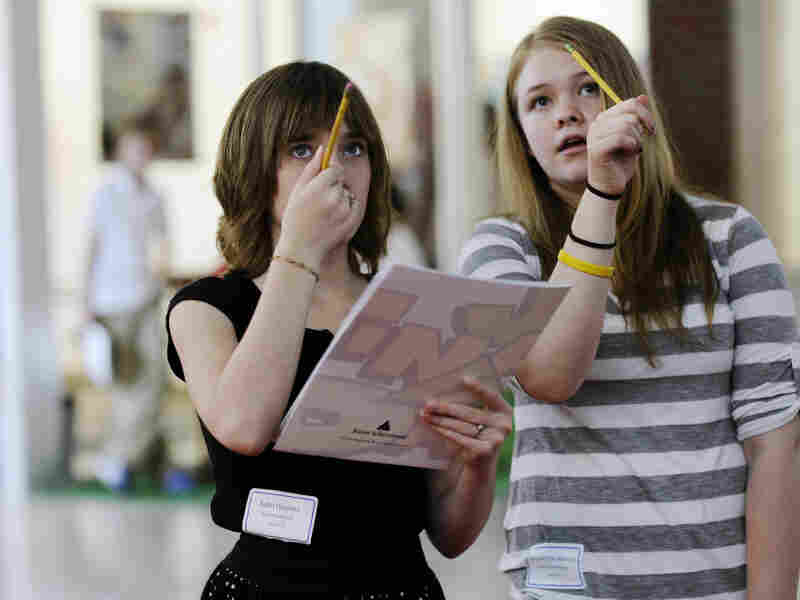 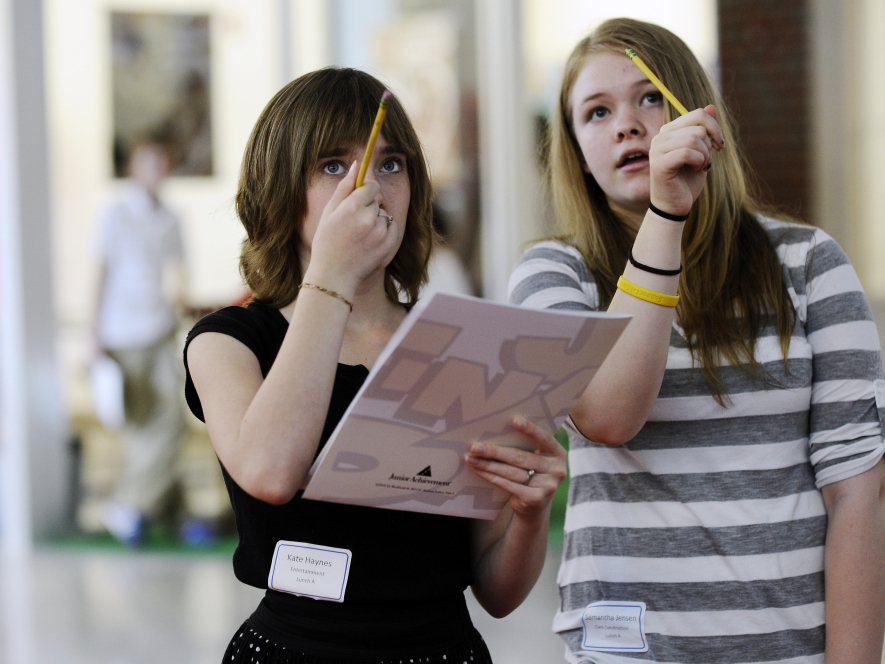 Kate Haynes (left) and Samantha Jensen watch the stock tickers and debate what to select for their investments while participating in Junior Achievement's Finance Park program in Fairfax County, Va.

Fairfax County in the Washington, D.C., suburbs has plenty of shopping malls. Finance Park, though, is the only one exclusively for tweenagers. Every eighth-grader in this large, suburban school system must show up at this mock-up of the real world, spend money and act like an adult for a day. Jacque Weir says she was magically transformed into "a single mom with an 8-year-old."

That's the identity that student Weir ended up with; it wasn't her choice, just the luck of the draw. She's pretending to earn good money — $82,000 a year. But to complete the program at Finance Park, she still has to walk around to the furniture store and the supermarket, and get a home loan from the bank. She must do all that and more without going over budget before she checks out in the afternoon.

That won't be easy, because she, like most of these students, is obsessed with one thing: "I'm buying a really expensive car," Weir says. "I have to pay almost $2,000 for it each month."

As they go from storefront to storefront, students are reminded over and over to save, be thrifty, don't overspend. But that doesn't stop the fantasies. In fact, the brush with adulthood just seems to whet their appetites.

One student stares at a computer screen that offers him a choice of cars — or rather, a choice of Volkswagens, because the German carmaker is the corporate car sponsor in this Finance Park. He muses, "I wish I could buy a Lamborghini."

Engage With Your Money

Further down "Ernst and Young Avenue," volunteers in another storefront try to help students sort through the same array of TV/phone/Internet bundles that drive average adults insane.

The Verizon Store looks like the real thing, thanks to the self-interested generosity of the corporate sponsors who teamed with Junior Achievement, a nonprofit group that helps educate young people about the world of business.

If all that makes this place seem like a product placement laboratory, that's part of the idea, says Kristen Charnock, who teaches physics at Washington Irving Middle School in Springfield, Va.

"I think it brings some reality to it," she says. "It's nice that they've designed the storefronts to make it look authentic."

And as grown-ups know, budgeting is not just a math exercise. David Van Vleet of the Fairfax County Public Schools system says the point of places like Finance Park is to teach good decision-making.

"These concepts are taught in civics classes," he says. "We teach taxes in mathematics courses. So they have these concepts that they are learning in school, but they need to see the practicality of those."

Being An Adult Can Be Un-fun. Who Knew? 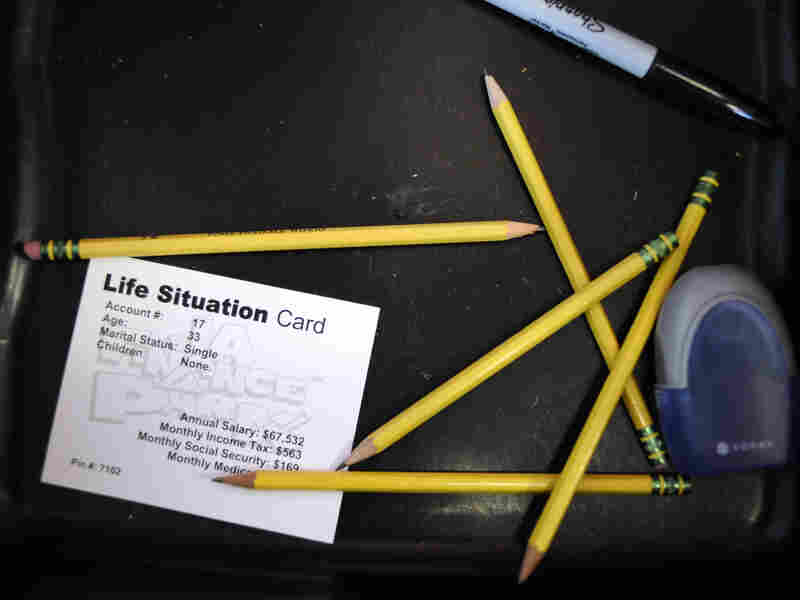 Each participant in the Finance Park program gets a "life situation" card. It details the information used to determine his monthly budget. Erin Schwartz/NPR hide caption 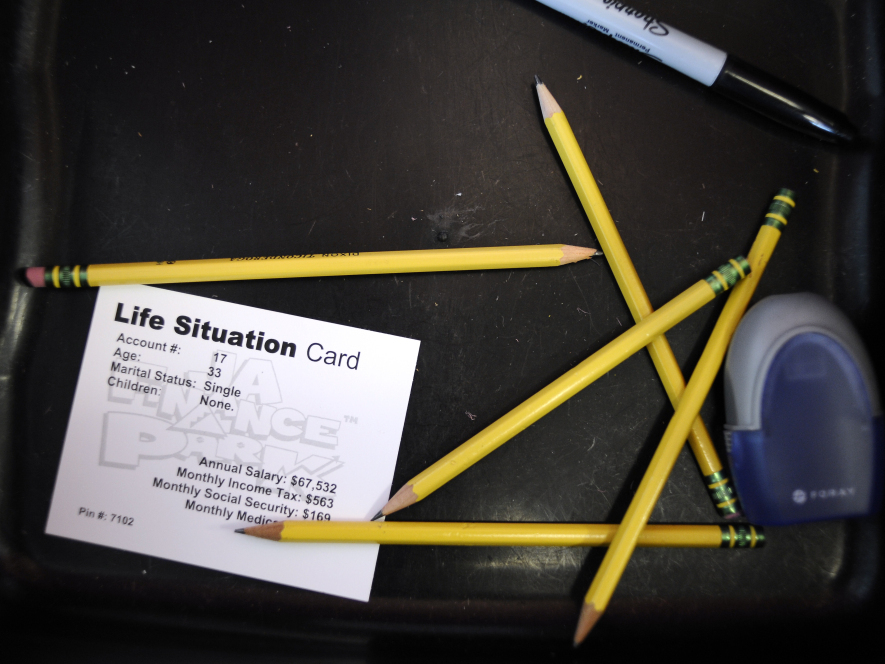 Each participant in the Finance Park program gets a "life situation" card. It details the information used to determine his monthly budget.

Many of these students say they had no idea how tough it is for their parents to keep their suburban lifestyles on track.

Student Lauren Katington says when finances come up at her house, "they tell me to go out of the room." But Katington says she would rather not know about her parents' financial struggles "because then I would feel bad for, like, asking for things."

Which raises an important point: If this stuff is so important, do parents need to share more, and discuss it at home?

Most of the kids at Finance Park say they've had fun there, although much of the experience stresses how un-fun it is to be an adult — how you can be earning good money and still be broke.

Of course, Finance Park is not reality — students are cut a lot of slack here. They only have to choose between baskets of food, not among hundreds of items with confusing food nutrition labels. They do not face the credit card hucksters and used car dealers who will prey on them later in life.

Here, if they enter the checkout line and find they screwed up their budget, the kindly checkout clerk, one of the teachers, can rejigger the numbers and make it all better.

There is some research indicating this kind of thing works, that students come out of this process better prepared to spend and save smarter. The question is: Will it stop them from buying into the next real estate bubble, or from blowing their savings on a Lamborghini?