Accessibility links
'Good Wife,' Bad Idea: When The Sexual Tension Isn't That Tense Or That Sexy The promos for tonight's season finale of The Good Wife suggest that it might send Alicia and Will farther down the road to hooking up — and that's probably a mistake. Sarah Bunting says Alicia would be better off single for a while. 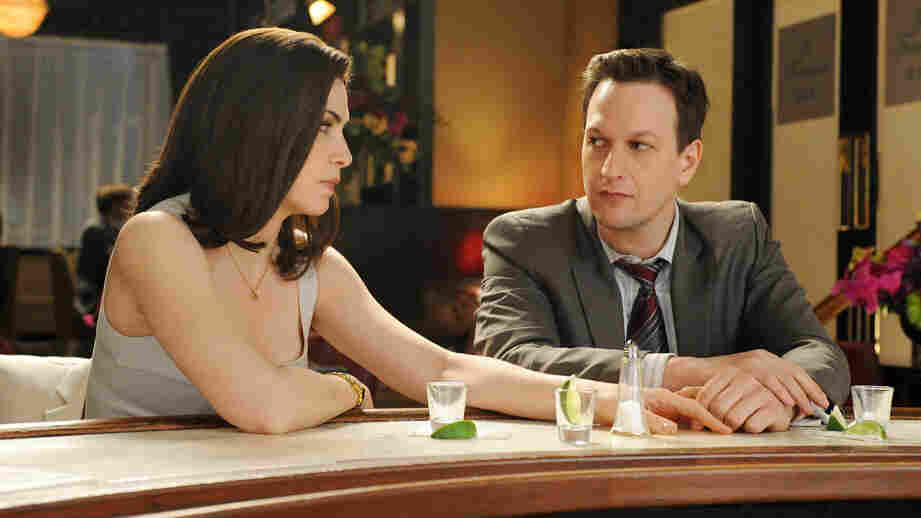 Alicia (Julianna Margulies) and Will (Josh Charles) have been dancing around for two seasons on CBS's The Good Wife. Getting them together might be a mistake. David M. Russell/CBS hide caption 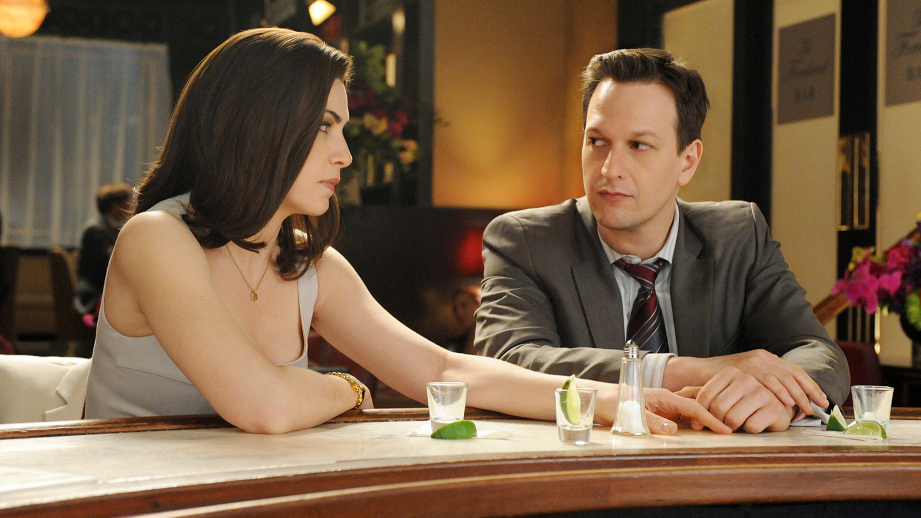 Alicia (Julianna Margulies) and Will (Josh Charles) have been dancing around for two seasons on CBS's The Good Wife. Getting them together might be a mistake.

I won't lie: I started watching The Good Wife because it had Chris Noth and Josh Charles in it. I liked the premise fine — longtime woman-behind-the-man Alicia Florrick (Julianna Margulies) must dust off her law degree and start over in the big city when her husband, State's Attorney Peter Florrick (Noth), goes to prison thanks to a hookers-and-payola scandal. But two of my celebrity boyfriends of long standing on one show? Buntnip.

The concept isn't what got me watching, but I looked forward to seeing where the show would go with it. I'd often wondered how the Dina McGreeveys and the Silda Wall Spitzers picked up the pieces after sidelining their own dreams for their husbands' ambitions, only to get humiliated by said husbands. What do you tell the kids? Do you post a c.v. on Monster.com? What happens next?

The Good Wife has done a good job navigating those waters for nearly two full seasons, while putting on a top-notch legal procedural, but it's at a crucial crossroads for its romantic plots, and I really hope it takes the road less traveled. As things stand now, Alicia has found out that, in addition to the hookers, Peter also had a one-nighter with guarded bad-ass Kalinda (that rare deserving Emmy-winner Archie Punjabi), whom she didn't know at the time but who has become Alicia's closest friend. She's ordered the recently re-elected Peter out of their home, and it's clear from the previews for the season finale that the simmering sexual tension between Alicia and her law-school classmate, longtime friend, and current boss Will Gardner (Charles) is about to come to a head (as it were) in the elevator at work. And that's a problem.

The TGW writers have done a good job backstorying and subplotting the feelings between Will and Alicia to this point in the series, but unfortunately, the actors don't have convincing chemistry. Margulies and Noth have it; it's not scorching, but it feels real and lived-in, the believable rhythms of a married couple who still share each other somehow, despite the ruptures in trust. Margulies and Charles just don't. Margulies has given the smoldering looks and lowered lids a hundred percent, but it's not catching fire; it comes off like Alicia is trying too hard, and that's an interesting direction to take it in, if it's intentional, but I fear it isn't.

What's more, it's a boring road to send the characters down. The love triangle no doubt worked to sell the show, and it's certainly time for Alicia to put Peter in her rearview (especially since Noth seems unwilling to make time for the show in his theater schedule). Instead of sending her straight into the arms of Will, though, why not put that entire plot element in the rearview and focus on what the show does well — office intrigue, soapy legal drama, and compelling turns by the all-star guest roster (Martha Plimpton, Michael J. Fox, and Alan Cumming, to name just a few)? Why not paint a more realistic picture of an attorney with two kids and a divorce on the boil, who has neither the time nor the career-suicidal tendencies to start an affair with a senior partner at her own firm?

(And while I'm up, why not let Margulies rock her natural hair? In her night job as Wig Cop, Tara Ariano of the podcast Extra Hot Great insists that Margulies' moldy mid-length bob is a wig (and at least one source says it was in the pilot); at the very least, it's a dowdy job of ironing that fit the character when she was mere weeks away from suburban-mom-land, but doesn't work now. Don't let co-star Christine Baranski's flawless flip steal the show!)

The writers have dragged the will-they-or-won't-they (no pun intended) vis-à-vis Alicia and Will out for two seasons now, which is fine, and it's natural to try to resolve it somehow, which is also fine. But the show is better served by having them Do It once, or maybe a few times, then realize that a relationship between them is a no-go. Pair them each off with someone else; better yet, don't bother pairing them off at all.

Use the third season to do more with Baranski and her character's weird, sweet relationship with Kurt McVeigh (Gary Cole). Use it to explore the breakdown of Alicia and Kalinda's friendship; use it to do more with Cary (Matt Czuchry, who's kicked it up a notch in Season 2). Skip the Dawson's Creek-style waffling between two men, and stick to the show's strengths: solid, interesting cases and excellent acting.

Sarah D. Bunting is chief cook and bottle-washer at TomatoNation.com, and she hopes you'll respect her cats' privacy during this difficult time for the family.